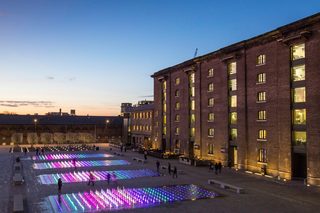 What: Central Saint Martins is a world famous arts and design college and part of University of the Arts London.

Where: our main campus is located in the award-winning Granary Building at the centre of London’s King’s Cross. The College also has campuses in Richbell Place and Archway.

Who: the College's alumni include artists and designers who have challenged and shaped the world around us (not to mention winners of the Turner Prize and the Oscars as well as a glut of Royal Designers for Industry and Royal Academicians).

History: the College’s DNA comes from two art and design schools, Saint Martin’s School of Art, established in 1854, and the Central School of Art, founded 1896. The Central School grew out of the Arts & Crafts movement, the School’s first principal, architect William Richard Lethaby pioneered an educational approach which removed the barriers between the intellectualism of design and the practical skills of production. He likened learning through theory and scholarship alone to learning to swim without ever touching water. Both Saint Martin’s School of Art and the Central School became focus points in the 20th century for radical practice across the visual arts. In 1989, the two merged to become what we are today, Central Saint Martins. We welcomed Drama Centre London in 1999 and the Byam Shaw School of Art in 2003.