The Space Between provides a discourse on the ways humans utilize space as a platform for validating where we are and where we aim to be.  Nine New York based artists place emphasis on spatial realization encouraging a type of thought-exercise through unconventionally placed treadmills and works that involve motion, the complex flow of the universe, and serial repetition.

Birnbaum’s treadmills are named after and capture the identities of their previous users. As the machines are collected, an archive is kept of the exchange between the artist and the previous owner.  Each machine carries a persona that exemplifies an individual story about moving in place.  WESLO, the upright treadmill,appears feminine and poised, while 16.0, the treadmill-diptych, evokes a horizontal path pursued in partnership.

Meticulously constructed pieces by Sarah Han are made of white cotton thread on dacron fabric. Han’s bulbous works convey a harmonious duality of space in their juxtaposition of simplicity and complexity. Paul Kolker’s paintings derive from his series, Jigsaws and Scumbles, the artist’s concept stemming from the fractal geometry of Benoit Mandelbrot. In these works, Kolker investigates the contours of the natural world, e.g., a jagged rock, or an expansive, uneven coastline.

Vince Contarino and Jeffrey Kessel think in marks. Their robust canvases are akin to memory filled with time dilating moments, adding musical dimensionality to the exhibition. Visakh Menon’s diptych promotes objects of fictionalized reverence birthed from aspects of technology and human-machine interactions. Moreover, the quirky, yet playful quality of Joe Ballweg’s ninety-six inch high composition, Saint Julian, relates to imagery from the legend of Julian The Hospitalier, a patron of travel.

In The Space Between, each of these nine artists contribute their perspective to the themes of time and space, often using machines, convex and concave forms, data, photography and other unconventional methodologies.  The combined effect is to transport the viewer from the mundane world of everyday existence into a world more transcendent. 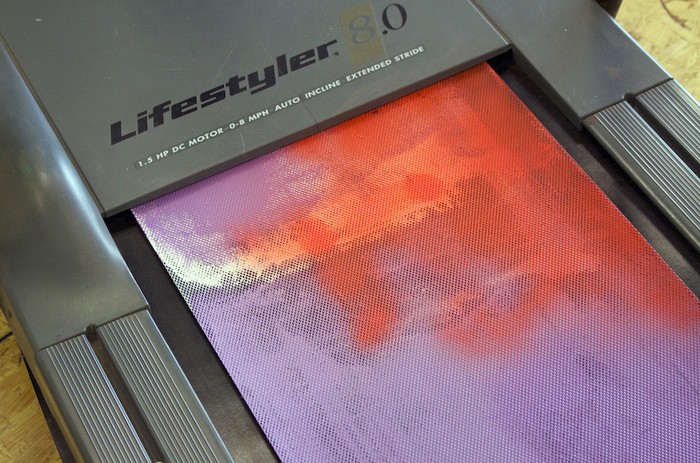