Unity through identity - Barhaini and Muslim American Self Portraits 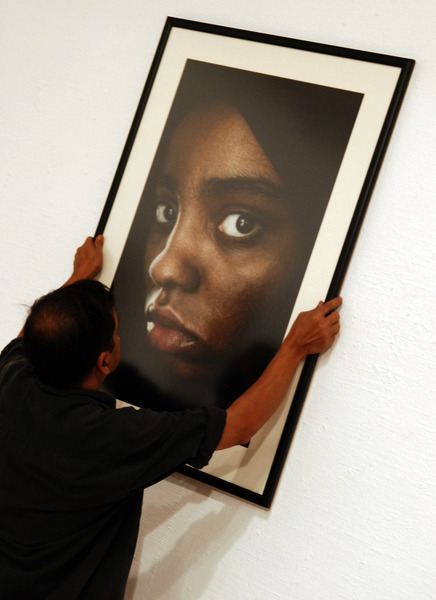 US and Bahraini Exhibition  quietly points in different direction

Community based, US artist Todd Drake and Bahraini artists collaborated for two weeks in May 2011, during the  “state of national safety” in Bahrain to create a series of self portraits that quietly model examples of cooperation and understanding. During two series of workshops led by Todd Drake at the Bahrain Arts Society in Manama, Bahrainis from all walks of life -- Sunni and Shia, young and old, novice and experienced photographers -- came together to learn better photographic practices. Participants were challenged to create engaging self portraits that shared more than the headlines on what it meant to be Bahraini at this time in history.

“The outpouring of images and ideas was overwhelming. The depth and breadth of their window on being Bahraini today is moving and informative.” says Drake. “We had expected no more than 20 participants per workshop and ended up with over 50 regular participants. It was tough to select only 20 images to frame to include in the final exhibition that was a culmination of the workshops.”  These images, along with 20 self portraits made by American Muslims that are a part of Drake’s “Esse Quam Videri” project, were combined into one exhibition entitled “Unity Through Identity.”  Each image is displayed with a contextualizing statement or quote from the subject or the photographer.

Drake has worked with the American Muslim community for 4 years to create a traveling exhibition titled “Esse Quam Videri (To be rather than to seem): Muslim Self Portraits.”  Currently on display at the International Civil Rights Center and Museum in Greensboro, NC and supported by the Center for Global Initiatives at the University of North Carolina at Chapel Hill, this project gained the attention of a United Nations representative in Bahrain, who recommended Drake and the exhibition come to Bahrain.  Supported by a grant from the Educational and Cultural Affairs Bureau of the U.S. Department of State and the U.S. Embassy in Bahrain, Drake spent two weeks working to create a show that now quietly models a collaborative effort to bring together diverse members of society at a time when divisions between groups have deepened and emphasize that through individual identities, unity is possible.

Drake states, “ All my work supports my basic operating principle; that art defines us as being human and that art like this can remind us of our shared humanity.”

The opening was well attended with almost 200 visitors. The exhibition is open through June 10th at the Bahrain Arts Society during its regular hours, Sunday through Thursday.

A smaller exhibition and workshop were also held in Saudi Arabia, sponsored by the Albaylasan Art Center and the U.S. Consulate General in Dhahran.

A video of the exhibition before the opening is available at:

Contact information for interviews of participants and images from the exhibition and opening are available on request at todddrake@mac.com .