A collection of work by four talented artists, all with a distinct passion for the skillful use of color. “Vivid Summit” is a window into the unique distortions of truth. While this collection connects each artist together in their bold use of hue, the recognizable interpretations of reality through the labor-intensive nature of their works is memorably distinct. Thus, collectively representing a body of work, where each artist’s individual styles are connected through the rendering of exquisite pieces using bold and vivid color. Delivering their distinctive interpretations of reality to Brooklyn and beyond. 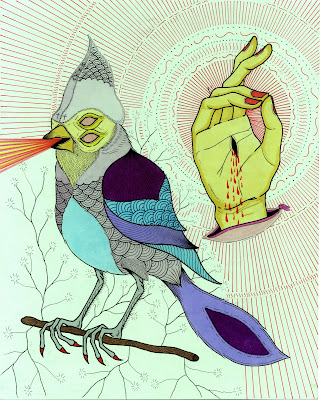 David M. CookBorn in Louisville Kentucky in 1972, relocated to Brooklyn NY in 2003. “I have been drawing for as long as I can remember. In the last few years, my work has been based primarily in pattern and color, using imagery taken from nature, the occult, punk rock, and heavy metal. These influnces have been used individually in my work, but in the last few years they have started to blend themselves together. Because these influences have been running through my head as far back as I can remember, the motifs I’ve used individually before has allowed me to follow a new direction of starting to develop, and follow more of a narrative revisited as subject matters in my newer work. In one of my last projects, the narrative was based on the love-hate relationship between a queen and a two-headed king, in a mythical world inhabited by snake horses, 6 legged priestesses, and countless warriors. It has been incredible for me to watch the quality of my work develop, and I hope I’ve been able to achieve more quality in this latest body of work. In this newest version, I find the birds living in a new world of pattern and color, and they have taken on more religious iconography (another reappearing theme in my work) with the idea of killing dreams - The priests and bishops of this world trying to hold back the thoughts and ideas of the non-believers of their world, using mind-control, and often times death, to make their point.” 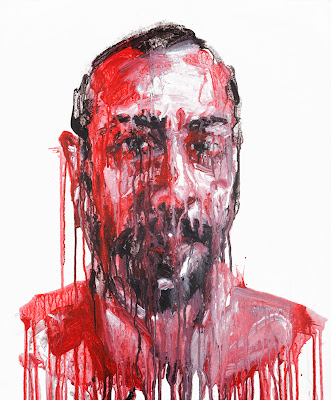 Chrissy Angliker was born in Zurich, Switzerland, and raised in Greifensee and Winterthur. Her artistic inclinations emerged at an early age, as she experimented with stone, clay, and found objects among other materials. Beginning in 1996 she was fortunate to study with the Russian artist Juri Borodachev, who became her artistic mentor for several years.  In 1999 at age 16, Chrissy moved to the US to study Fine Art at the Walnut Hill School in Natick, Massachusetts.  In 2002 at age 19, Chrissy had her first solo show at Gallery Juri in Winterthur, Switzerland.  Seeking to broaden her means of expression, she then pursued a degree in Industrial Design at the Pratt Institute in Brooklyn, New York.  The skills she developed there, including three-dimensional design, relationships between objects, and creating character through form, continue to influence her artwork, and vice versa.  Chrissy's design work includes furniture, lighting, product design, way-finding, display design, graphic design and branding.  After spending her post-graduate years working in the design field, Chrissy's creative expression shifted back to painting in 2008. Since then she has cultivated her artwork in addition to her pursuits in the design realm.  Chrissy's work in both art and design reflect her spiritual, political, and humanitarian perspective.  Her work has been featured in several international publications. 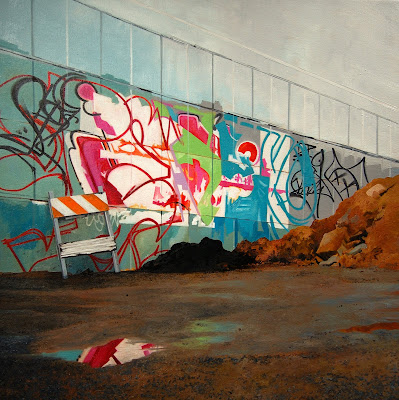 Jessica Hess
Rather than elegance or grandeur, my focus lies in structure, simplicity, and decay. In practice I work with photographs, which serve as both a reference and a starting point. My work develops from an accumulation of images and impressions of urban, industrial, and abandoned architecture. Some paintings are made with fidelity to the original source, while others are reinvented, compiled, and manipulated. Over time the works become subconscious collages of material and combinations of locations from years of collecting images and observations.


I am attracted primarily to utilitarian buildings where engineering takes precedence over aesthetics. Many of my subjects are vacant or disused, and beautiful in these states of neglect. Although the paintings are devoid of human life, the structures and sites I work with bear witness to a human presence and the dynamic nature  of the urban environment. Their surfaces reflect the visual call and response of graffiti, as well as the slower processes of weathering and deterioration.


My inclusion of street art documents and makes permanent these otherwise transitory public works. By painting graffiti laden sites I am participating in an anonymous collaboration with other artists and  giving a quiet nod of appreciation to street art. All street art evidences creative traffic and the time invested by others on my otherwise lonely subjects, adding color and excitement to otherwise dull locations. In reworking and transforming these locations my paintings further this collaboration of time, structure, and surface. 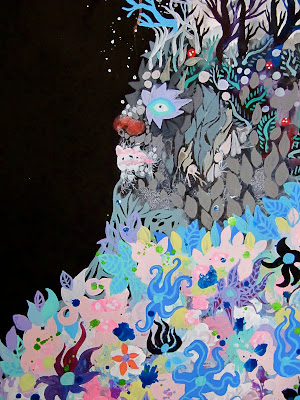 Erin McCarty
Emotive, celebratory, dark, and intimate, my work highlights the unusual beauty of environments and creatures both real and imagined.  Influenced largely from the patterns and colors occurring naturally in the outside world as well as within our body system, my paintings communicate the excitement, grandeur, and terror of human life and the unknown. Originally born and raised in Valdez, Alaska, I now live and work in Portland, Oregon.