Roza Pavleska (born 1979) is a Macedonian sculptor who creates artworks inspired by contemporary science and technology based on traditional values and mythology. Her sculptures are revealed in several exhibitions. She is a winner of numerous awards and author of several monumental public sculptures in her country.
The main subject of her art is the human with his activity. Her artwork has raised a wide range of ideas and issues (traditional, cultural, existential ...). Her earlier work dealt with the idea of merging different realities, bringing the sensual into a dialogue with the above sensual (the immanent with transcendental) the past with the future. Thus, she creates works with deep content and a clear message to the viewer. Recently, the human activity in the field of biotechnology (gene manipulation) and the wide range of issues associated with it became a special field of interest in her work. Pavleska asked herself a crucial question: While in the past the strange creatures were only mythological, what would they be in the future? 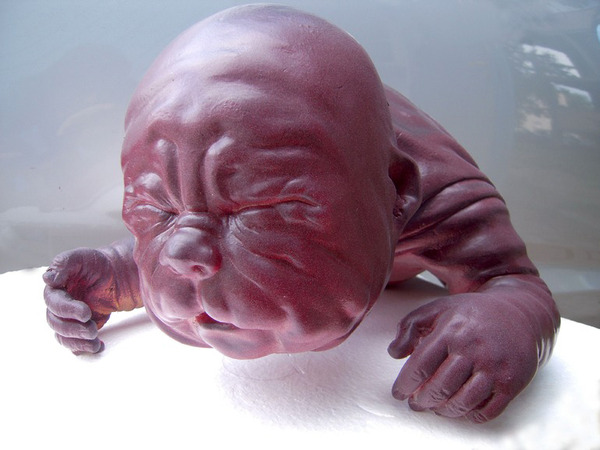 The “Newborn” is just a scream emanating from all the issues that the human ask themselves while creating new organisms. It is an asexual creature born in a glass dish from the set of manipulated genetic materials, has neither a mother nor a father, neither a past nor a future… And again blending the immanent with the transcendental in a subtle way Pavleska created an artwork which tries to deliver a silent scream to the percipient... A metaphorically symbolic and mythical sounded expression prevails in all her works. The aim of her work is that the visual impression suggests surrealistic sequences, erasing the border between the sensual and the above sensual.


RAW Space
ArtSlant has shutdown. The website is currently running in a view-only mode to allow archiving of the content.