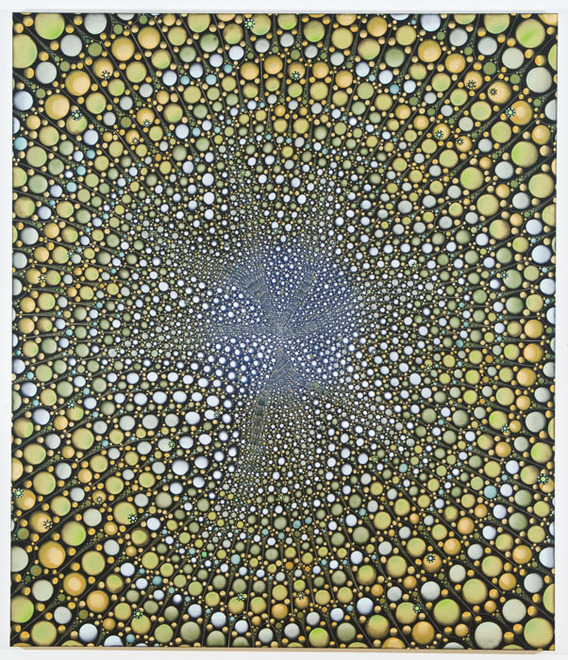 With a palette of metallic golds and silvers, subtly layered with the turquoises of biology textbooks and the greens of sea algaes, Barbara Takenaga’s paintings evoke ambiguous otherworldly environs. Although immediately reminiscent of the flat yet psychedelically perspectival effects of Op Art, Takenaga employs an opposing technique in her paintings, currently up at Gregory Lind Gallery at 49 Geary. Instead of using flat shapes to create optical illusions there is a layered depth which simultaneously imitates the look of 2-dimensional, simple circular shapes, while forming infinite vortexes. Both expanding outward and collapsing in on themselves, these celestial structures conjure the molecular framework of black holes or nebulae while also bringing to mind the suction-cup-like undersides of sea stars or octopi.

As is the case with both the Earth’s oceans and that of outer space, large percentages remain either unreachable or unexplored. Takenaga’s paintings hint at these mysterious cavities which surround daily life. Although this may not be her direct intention, her reference to angels and ghosts in the titles of a number of her works do suggest an interest in some type of an unknown.

In “Ghost Triptych” (2007-2008), three tendrilly spirals, rotate in black space. Modeled orbs of grey and white and green compound into wisps of white which could depict a disturbed film on the surface of a dark sea or some captured spirit residue of the now deceased. Or perhaps, it is more literal, maybe the coils of human DNA, miniscule and buried deep within the body. In any case, there is a softness in her stroke and a calming effect, in spite of the relative, yet ordered, chaos that Takenaga’s paintings seem to confront.

Posted by Ava Jancar on 3/14/08
RELATED ARTICLES
COMMENTS (0)
ArtSlant has shutdown. The website is currently running in a view-only mode to allow archiving of the content.