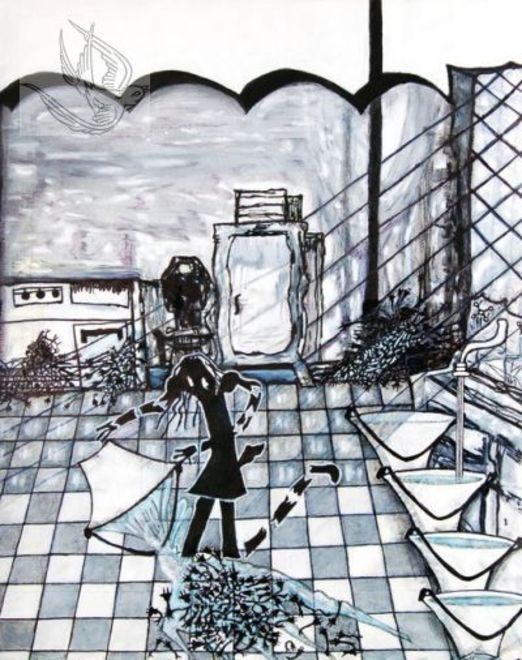 I checked the new group show at Fred [London], Collage, London/New York, as it was being installed. There were some wonderful things spread about the gallery waiting to be hung. The opportunity to stage a major exhibition of collages arose from contact with Pavel Zubok Gallery, New York; a specialist collector with pieces ranging from Marcel Duchamp to Joseph Cornell (magician of mysterious and intricate cabinets). The survey includes over seventy artists drawn across generations from the 1920s to contemporaries such as Jay Cloth and Marcus Harvey.  Duchamp’s Nude descending a Staircase, introduces the exhibition; a print of the cubist style painting from 1912 paired with a multi-exposure of the artist making the ghostly descent.

A sense of liberation from formal aesthetics permeates the works; collage seems to invite the makers to chance the unexpected and enjoy a freedom of association. India Evans with her delicate hand-tinted fantasy, Ripe Visions of Boundless Presence Fulfilled echoes the female imagery seen in a photo-collage made by Dorethea Tanning in 1947 of a flower-filled chair.

The coupling of different generations discloses unusual links, for instance placing Avis Newman’s abstractions by those of Margaret Mellis and Wilhelmina Barnes Graham.  A late period piece by Robert Motherwell, Cabaret No.8 1974, has the quality of a primary cubist composition; the bold feature of a torn section of cream paper, an ornate flattened cigarette pack, and two spare vertical lines that seem to fine tune the work.  Beside that sits a painted sculpture by Betty Parsons  (the famed gallerist was herself a working artist), Djibouti, 1978, made with patched acrylic on seasoned wood.

Though generally decorative, some pieces carry a strong emotional charge such as Derek Jarman’s  Peace on Earth, 1986, where broken glass shards are set in encrusted swirls of darkened oil, catching you with black reflections as you pass. And  look out for an impressive trio of formidable performers: Joe Tilson, The Vast Strange County, 1968;  a glowing rough cast blue and red Lenin by Andy Warhol from 1987; and the postcard shrine to HRH Charles Windsor, Flower Prince, 1981, by Gilbert and George.