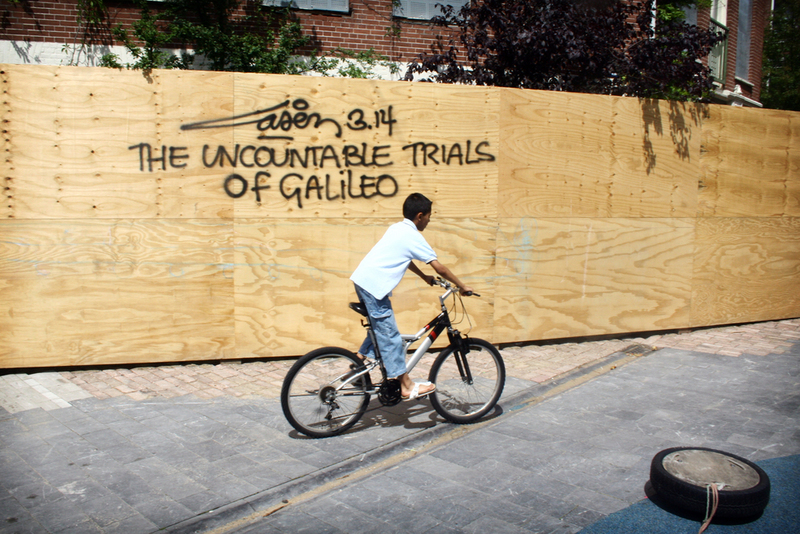 From the Streets: Interview with Laser 3.14

To some, graffiti is considered vandalism; destruction of property, a crime against society. Others believe it to be grassroots creativity; a proletariat method of social and political communication. I personally see it as expression…in every sense of the word. Spray painted murals, stenciled figures, and single word tags controversially declare a belief, a principle of one’s truth. In most cases, this truth remains elusive, not to mention conceptually provocative. Many street artists attempt to embrace these elements; perhaps for the sake of building recognition or to establish a connection with others. I believe that one artist in particular, Laser 3.14, goes beyond this elemental framework, philosophically capturing the very essence of mystery and intrigue.

Laser 3.14 is an artist, poet, illustrator; absolute visionary. Primarily known for his poetic approach to graffiti, Laser’s concept surpasses predictable inscriptions and produces what many consider literary art. For this Amsterdam native, the city is his canvas. One-liners such as: Salute your woman; Barcode be thy name; Pining for a world that won’t explode; and Today I hired a detective to track me down profoundly grace the streets of Amsterdam, London and many other metropolitan regions. Laser’s poetry appears on what he notes as temporary materials; fences, containers, portal cabins and scaffoldings. His simple yet distinctive technique leaves many enthusiasts to question the reasoning behind his craft. For this and many other reasons, I felt it was necessary to personally speak with Laser 3.14 and discover his truth.

Athena Newton: Your name, Laser 3.14, what does it signify?

Laser 3.14: I was writing Laser as a tag in the 80’s, and then I just continued with that. It’s just a name that I kinda of kept along the way…

AN: Okay, the 3.14 isn’t birthday related or anything…

L: No. [3.14] actually came later…I also collect records, and I was listening to a band called Public Image Ltd it’s from the guy who was in the Sex Pistols; Johnny Rotten started the band after the Sex Pistols. There is a single called This Is Not a Love Song, but the b side was called Public Image, and I was looking at it and I thought ‘ok, the first letter of Public and the first letter of Image, they say Pi- Pi, that’s actually 3.14, and as a graffiti artist you try always try to create the public image because you’re in a public environment… I felt that it was a cool angle to use a chart…

AN: How long have you been writing graffiti?

L: Ever since I was 10 or 11…I saw all these tags in Amsterdam--at that time graffiti was at its infancy and very tag based.

AN: So pretty much when the street art scene, at least in New York, started…

L: Actually in New York it started in the 70’s… [In Amsterdam] it started with the punks and squatters, guys like Hugo Kaagman and Dr Rat at the end of the 70’s but hip hop graffiti really picked up steam in Holland around ‘83, ‘84. I was 10 and rap music was beginning to emerge…also electric boogie--it was still very underground. Because of the environment at that time that I was living in I picked up [graffiti] very early before it became a hype here. Also, I saw all these tags around Amsterdam and I didn’t really know what it was but I really liked the imagery of it, so I just started imitating them whenever I had chalk or a marker, just to copy stuff that I saw. But I was very oblivious to the fact that there was a whole scene around graffiti, until I started seeing the early Hip-Hop video clips and then I was like ‘okay, it is something’ [laughs].

Posted by Athena Newton on 7/20/09
Tags: graffiti/street-art
ArtSlant has shutdown. The website is currently running in a view-only mode to allow archiving of the content.