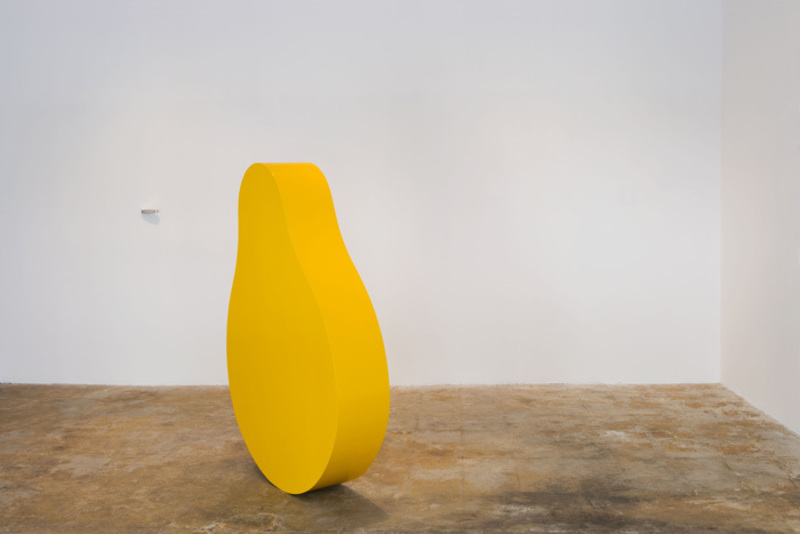 Jeff Jamieson makes his sculptures, and then most often picks one color and paints them.  A look at the list of artwork reveals a rather simple litany of materials: “Plywood and paint.”  He has a few drawings (“Ink on paper”) and a couple other pieces made from other things (one “Copper”, another “Aluminum”).  All the pieces but one are untitled with a parenthetical description of their color.

Given his tendency towards professional understatement, in his off hours I think Jeff runs covert missions for the CIA.  He will never disclose the countries he visits (Nicaragua, code word “Violet”).  And he will never divulge his individual thoughts, perspective, or sensibility.

But his art does and that’s the point.

Walking into the gallery to your right are three smaller pieces: inch and a half strips of plywood on the wall with two arms or levers jutting playfully from them.  One is brown, one is red, and one is yellow.  These arms angle out into different shapes or robotic gestures.  The pieces are mounted seamlessly to the wall—their frailty belied by the confident presentation.  As you look at them, details in the material and their making pull you out of the gallery and either into Jamieson’s studio or into your imagination.  The color of dark brown and the careful brushstrokes combine to say “wood”.  Or the yellow one flies a small pennant-like shape upwards, and its tiny edge has been nibbled in the center by a passing blade.

In the middle of the gallery are two larger sculptures.  Be careful with your associations.  The bright yellow was at first an upside down light bulb, but it could have been the lava in a lava lamp just heating up.  When I looked at the pale blue sculpture of equal size after a whirlwind tour of thoughts I landed on Shmoo and knew I had gone too far.  When you look carefully at both of the larger pieces you see the edges are hand shaped.  The impression of the art gains power through the subtle combination of formal reticence and personal craftsmanship.

There are more of the small plywood pieces on the wall to your left.  The slightly irregular brushwork in the off white piece transforms the paint into brushed fur.  The hot blue piece is reflective and looks to be enamel paint with how it pulls against both the surface and the brush.  The edge of another piece is slightly worn from either a scuff in transport or maybe gravity pulled the paint from off the edge while it dried.  On the arm of one of these pieces a single bit of lint has come to rest.  Bent and curling it doubles as a spider on the edge of a cliff.  But again that’s going too far.

The aluminum piece, “Untitled (For Kevin)”, is a sensational example of resistance, distillation, and condensation.  It is not an object so much as a shaped form—the result of the eye communing with a repetitive motion.  The eye of the artist has more presence here than the aluminum.  In order to allow our associations to play Jamieson seems to have quieted his.  The resulting shapes and colors he gives to the viewer invite through their passivity.  The one exception to this is the only piece with a title, “Headphones”.  Two squat cylinders of copper have merged.  The piece sits on the wall as the residue of a vision and process rather than the evidence.  But the scale is intimate, like the title, as proof that even if we can’t share the artist’s feelings, at least he cares.

Posted by Mitch Temple on 5/11/09
RELATED ARTICLES
COMMENTS (0)
ArtSlant has shutdown. The website is currently running in a view-only mode to allow archiving of the content.