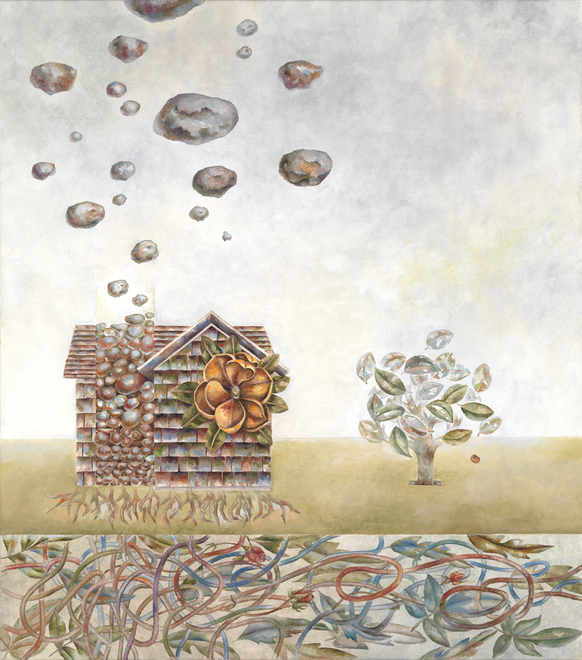 Three Artists and a Two-Eyed Cat

Work from a West Coast artist, a Rhode Island School of Design (RISD) professor and a Southern "Yankee" are featured in "Fresh Faces 2009", the current exhibition on view until April 11th at Judy A Saslow Gallery.  Located in the heart of Chicago's River North gallery district Saslow has established herself as a champion of Outsider, Folk and Contemporary art.  I must caution that a leisurely trip to the famed intersection of Superior and Franklin can quickly turn into a marathon of gallery "hops" giving new meaning to the word.  It is among this urban sea of bright banners, glossy windows and hardwood floors that Saslow's gallery calls home.  The group show presents an array of perspective and approach to medium.  It seems that Jonah Burlingame, Wendy Seller and Otto Lange have only two things in common: a two dimensional format and a devotion to their process.

West Coast-based artist Jonah Burlingame works with found objects like door panels and turkey basters as a mode to layer each step of his creative evolution.  Through Detours and Parenthesis (2008, seen at left), is a fiery field of orange that suggests the heat and texture of molten lava framed by pastel bands that are reminiscent of Helen Frankenthaler.  Burlingame's approach does not suggest the color field theory of the mid 20th century, but rather Andre Breton's Surrealist Manifesto.  Finding inspiration from the subconscious and the events of daily life, Burlingame paints layer by layer allowing time for the acrylic, varnish and compound to set and dry overnight.  The application, examination and re-working by the artist is part of his routine as Burlingame states, "Painting for me is a constant study of process".

solace from the dangers of the outside world.

Like Burlingame, Seller feels that the creative process is intricate to her work. She describes it as intuitive and similar to surrealism.  Every image undergoes great consideration and study as elements are added one at a time, "there is considerable adding and subtracting until the confusion finally settles to coherency".  War and Peace II (2007, seen at right) depicts a delicate house in a bleak, unidentifiable landscape.  The house is encased with branches; a bird flying above suggests that it is building a nest.  The branches wrap, puncture and entrench the home.  Much like our daily lives, we are bombarded with information, tasks and news media to a point where it seems there is no way out- as if we are trapped or caught in a bird's nest.

A Southern "Yankee," Otto Lange brings a sense of levity to the exhibition.  The artist injects humor into each painting with a play on the literal and absurd.  Lange's paintings show a fine level of detail.  The every day objects coupled with bizarre scenarios nod to artists that have come before him.  Big Tomato (2009, seen above) holds Campbell's tomato soup can as its subject crowned by a seated nude and large spoon.  The obvious relation to Warhol seems cliché, but the prominence of the soup can and female nude mocks the pop artist reminding you to not take this too seriously.

The blue sky, origami birds and outstretched hands of Lange's Songbirds (2009, seen above) speaks as a clear homage to 20th Century master in Rene Magritte and his iconic work, L'homme au chapeau melon (1964).  To speak of his process Lange states: "My silly little thoughts and ideas become important to me through labor and craft."

Unrelated to the exhibition, but of definite note is the collection of work by folk artist Bill Traylor on display at the back of the gallery.  Born into slavery, the artist did not pick up a pencil until the age of 84.  The lack of formal training is evident in the artist's rough and child-like drawings.  However the simplicity and innocent perception of the artist comes to life through this series of works.  Images of Turtle and Two-Eyed Cat (seen above) show Traylor's ability to document.  While more aggressive scenes like Possum Hunt reveal the crude life on the plantation.  All thirteen works are from a private collector who has placed them on consignment with the gallery.

Judy A Saslow Gallery stands out as a River North veteran offering work by artists that are self-taught, under-recognized and emerging; a refreshing change from the commercial and decorative art found in the neighborhood.  Aside from the gallery's mission, it has a strong commitment to make art accessible to the community by offering payment plans and a range of price points for both the novice and established collector- a smart and active move given the current conditions of the art market and economy.