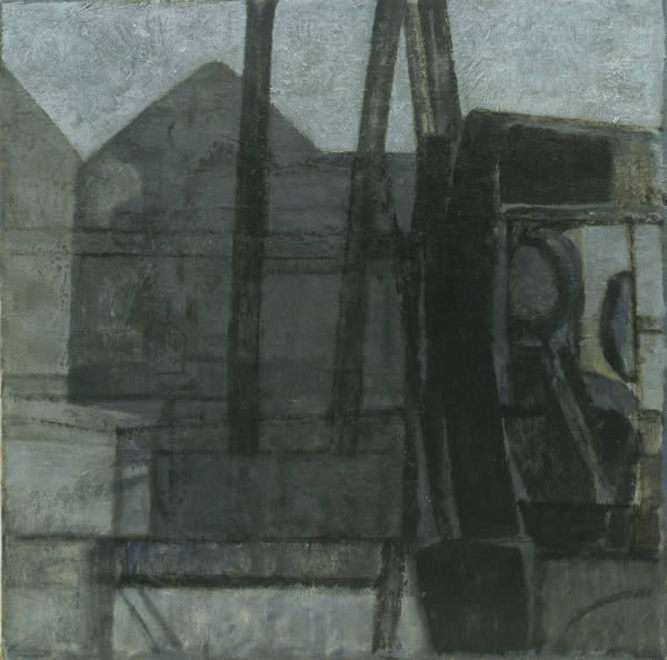 Prunella Clough came to be seen as the quiet voice of British abstraction, yet since her death ten years ago it has continued to resonate where more assertive voices have faded away. What was it about this ‘art world recluse’ who found poetry in our urban debris?
In a recent essay the analyst and critic Adam Phillips explores the difference between two kinds of creative experience: one where the artist seeks to fashion himself, the other where he or she intends to reveal something separate and apart from the self.  ‘In one version the self (ego) is the instrument, in the other it is the obstacle’. Where one makes the world in his own image, the other perceives the self as midwife, as servant of a process.
For Prunella Clough the process was the point; it allowed her to wander playfully away from her starting point (a sweet jar perhaps, or a oddly shaped toy), before returning to it by a quite unexpected route. What she recovers is strangely familiar, uncanny even. These are things, mundane and peripheral (string, fencing, wire, plastic wrapping), that we unconsciously register but which she returns to us in conscious form. The language is spare and restrained but resists tidy formalism, remaining supple and receptive. Her found shapes are not descriptive but intuitive, their irregular contours often delicately outlined (as in the scrunched up paper of Untitled c.1980, which suggestively echoes her wartime work as a cartographer).
Like Morandi, she evokes a sense of wonder in the small and unnoticed, bringing her persistent gaze to bear on the space around and between things. Despite their often intimate scale, her images are never claustrophobic; they let in a lot of air, even if it is sometimes cold and grey, as suited her northern temperament.  And often they contain an incidental beauty, as in the surprising elegance of tangled typewriter ribbon fixed to old fibreboard.  She once said: ‘I like to say a small thing edgily’.
She was also a personal inspiration, writing a note after my first show in 1990, gently encouraging a young painter to keep on ‘making paint move into some sort of life’. And so it is good to have a chance to see, through the 50 years of  practice that this new show encapsulates (and which the Tate show in 2007 so sadly failed to do), just how often she managed to do this.

Posted by Luke Elwes on 3/3/09
RELATED ARTICLES
COMMENTS (0)
ArtSlant has shutdown. The website is currently running in a view-only mode to allow archiving of the content.