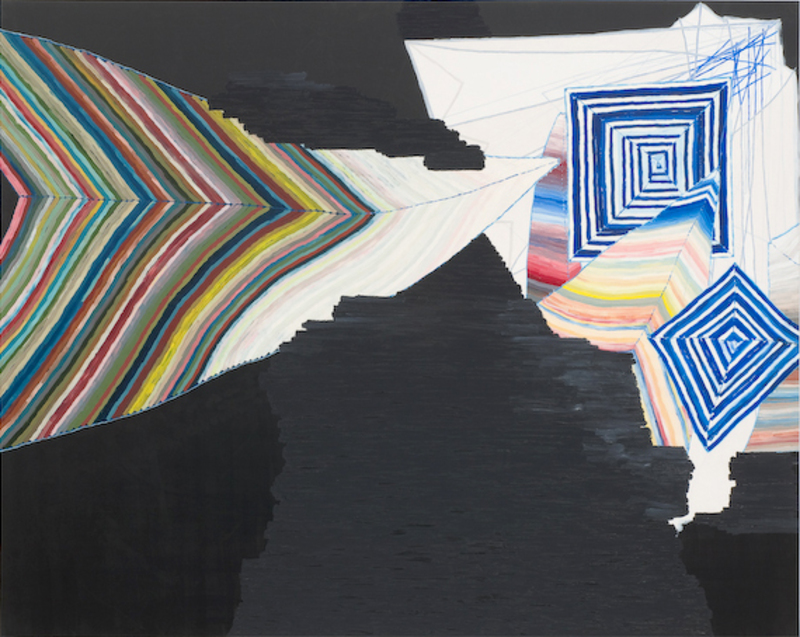 Los Angeles - Allison Miller is an Illinois-born painter who currently lives and works in Los Angeles. ArtSlant writer, Nancy Lupo, visited with Allison and discussed her work, process and inspirations.

Allison Miller: I think at one point I may have thought that there was only one optimal solution to each painting; one final, correct stopping point for every painting, not just my own. I don’t think that anymore. I am becoming more and more comfortable with the idea that, at least for my paintings, there are any number of directions that each one could go in, at any point in the process of being made, and that each of these directions would lead to a different painting. There is no telling whether or not these other possibilities would be more or less successful than the painting that is actually made. I find that exciting. I’m constantly reminding myself that I can’t fight every battle in every painting and that each one can, and hopefully will, function or perform in a different and specific way. There are countless paintings to be made in the future, and that takes some of the heat off the idea of making a “perfect” painting in the present – or even that there is such a thing. Having said that, I do think there is such a thing as a perfect painting for a specific moment, almost like a craving that you may not know you have until it is satisfied by a certain image you are lucky enough to remember or see at the right time.

NL: Do you make sketches or otherwise plan out a painting before you begin?

AM: No. I don’t make sketches or plans, or even drawings in general. This may change at some point, but right now I like the idea of putting all my energy into the paintings themselves. When I have mapped things out for paintings in the past, things have always felt tedious. It may be out of a superstition of some kind, but I like to think of the paintings as the drawings for the paintings and the paintings of the drawings by the time they are done. Things are sorted out entirely on the canvas itself and I think that can be felt when you see them. Part of this process seems to be that I come to a point with every painting where I think there is nothing more that can be done, there is no way to salvage the piece. The challenge is to save it - to solve the problem - and I won’t know until the end if that is possible or not.

NL: Can you talk about your relationship with figurative painting, in particular James Ensor’s Christ's Entry into Brussels in 1889?

AM: I am a big fan of James Ensor and am blown away by that particular painting every time I see it. We are lucky enough to live near it, as it is at the Getty. The nicest thing about it is that you have to look for Jesus in the crowd. He’s there, but he doesn’t dominate the picture they way you would expect him to, considering the title of the painting. The scene itself is the subject, Christ just happens to be the catalyst. It is large enough that you get caught up in small moments throughout the painting and can easily loose track of what the hell is going on. To me it seems almost aggressive how much information is presented in the painting, and it is all important. From what I know about it, Ensor painted it in sections since it was too big to work on at once, and this accounts for some, but not all, of the uncomfortable decisions that were made. It seems to be 10 different paintings at once in terms of scale shifts, colors, perspective – everything. And dead center, leading the whole procession right at you and, in fact, coming out of the picture plane, is the leader with his baton at an angle that seems to acknowledge that it is a painting. The more I think about it, this is probably a perfect painting.

James Ensor, Christ's Entry into Brussels, 1889, Oil on canvas; Courtesy of the artist

NL: While your paintings carry undeniable connections to the work of artists like Agnes Martin and Mary Heilmann, they stop short of providing the viewer with a solid connection to a transcendent or spiritual life. Could it be that your paintings present more of a practical approach to the spiritual or transcendental?

AM: That is a hard question to answer... They perform a function for me personally while I am making them. Once they are done, however, they become something else. Since there is no real planning involved in the making of the paintings, they are as much a surprise to me as to anybody looking at them. They are constructed and deconstructed piece by piece until they are done – and I know when they are done - but the final product is a mystery until then. I have stepped back at the end and been shocked at what a painting has become. I am not trying to depict a state of mind but maybe the amalgamation of the thoughts that have been prodded on by the painting itself, decision by decision.

NL: What of the new age and anarchy?

AM: There are plenty of things in the “new age” category that don’t belong there. Or at least deserve better. What used to be my bedroom in my parents’ house is now home to a lot of Native American baskets (as well as the TV), let’s just say that. As far as anarchy goes, the only thing that comes to mind in relationship to my work is the voice in my head that tells me not to trust my first instinct when deciding what to do next in a painting. Part of why I love that Ensor painting is that there are some truly awkward, ugly, bad decisions being made in it which is part of what makes it so compelling. To think of those decisions being made and what the thought process was behind them is endlessly interesting to me. So, maybe the third or fourth thing I think of is the right thing to do, or maybe the first thing I think of three days later, but the very first things will always be what I have basically been trained to do. I guess that would be my benign form of anarchy.

NL: Do you ever or often hazard to navigate Los Angeles on foot? Where do you go? What do you find?

AM: Until Griffith Park, R.I.P., went up in flames I was doing a lot of walking in there. Since then I’ve been walking the neighborhoods around my apartment and studio. It is quiet up in the hills and there are lots of plants to steal. My apartment and studio are full of crap that I have picked up on walks. In a funny way the walks are an important part of the practice.

NL: Have you found nature or man’s idea of nature to be the more terrifying truth?

AM: Uhh, I guess what I know of nature is pretty terrifying. Having never lived through a real disaster, though, the brand of terrifying I mean is the slow, silent kind. The kind you would never notice unless you stopped and stared at it. Mushrooms growing in the wild have always scared the hell out of me. And burls on trees freak me out so much I almost can’t look at them. I was in a forest on the Olympic Peninsula once and realized that every tree around me had at least one burl on it. My reaction was totally irrational; I had to walk out with my jacket over my head staring at the ground. In general, there is an indifference in nature that is startling.

AM: I have a little plot of dirt next to some stairs that I have crammed with I have no idea how many little pots of cacti and succulents that I’ve bought or stolen out of people’s yards. I stare at them a lot. They are trophies I pick up and reminders I like to look at, the stranger the better. 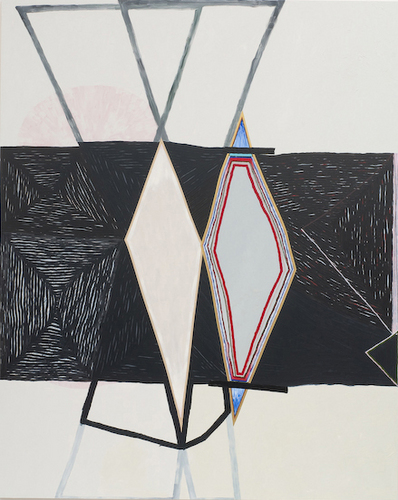 NL: Do the abstract forms in your paintings have material counterparts in the physical world?

AM: Probably more than I even realize. The plants I have and see when I’m walking around are a huge influence. There is an asymmetry to the point of being absurd in the forms and growth patterns of some of these plants and trees. I also have quite a big collection of seed pods. And rocks. And coins that I’ve put on train tracks. But it is the relationships between the forms within the paintings that these natural (and unnatural) objects have the most effect on. It is how forms butt up against each other and overlap each other in nature that is the most interesting. Unholy combinations all over the place.

NL: Are they supposed to be funny?

AM: No, but I’m glad that some people think that they are. I have been told by a few people that they think the recent work is funny. I think some of them are, or certain parts of them, but I can’t say that I consciously intended for them to be. I have known that some decisions were ridiculous while I was making them, but that is relatively speaking. Well, maybe they are supposed to be, a little bit, for a very specific sense of humor.

ArtSlant would like to thank Allison Miller for her assistance in making this interview possible.

Posted by Nancy Lupo on 10/17/07
ArtSlant has shutdown. The website is currently running in a view-only mode to allow archiving of the content.