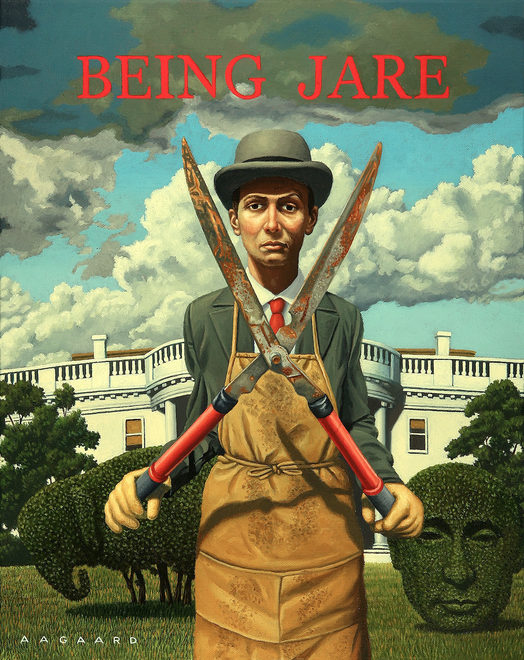 "Shots in the Dark" by Virginia L. Clark

We've got people from all over the (U.S.), but not from Hawaii or Alaska this year. We're looking to showcase a lot of artists who don't have a place or market for their work, including in Taos. There's a lot dealing with social issues, gender equality, socioeconomic disparity, a lot of political stuff. Artists are sort of challenging the paradigm that we have right now. People need to have some of their ideas challenged.”

How an artist specifically reacts to such relative "darkness" is the theme of "After Dark 7," the seventh annual exhibition of lowbrow and pop-surreal artwork, opening with a reception Saturday (June 9) from 5-8 p.m. at Greg Moon Art, 109-A Kit Carson Road.

"We've got people from all over the (U.S.), but not from Hawaii or Alaska this year," Moon said in a telephone interview. "We're looking to showcase a lot of artists who don't have a place or market for their work, including in Taos. There's a lot dealing with social issues, gender equality, socioeconomic disparity, a lot of political stuff. Artists are sort of challenging the paradigm that we have right now. People need to have some of their ideas challenged.

Moon said he, and by inference, co-juror Ausgang, are not the least averse to "poking a stick through the bars. Yes, I'm a rabble-rouser."

Ausgang and Moon prize lowbrow art for its inclusiveness. Hailing from Los Angeles, Ausgang moved from Texas for the art and surf mythos of California culture. He and Moon say a huge draw of lowbrow art is accessibility, that it's not as elitist as fine arts often project.

"But, 'After Dark 7' isn't just dark humor or lowbrow," Moon said. "There's enough variety that people can find something they like. New Mexico goes more to low rider and tattoo art, a lot of Day of the Dead. But sometimes it's just nocturnal imagery. It's just interesting to see how different people interpret darkness."

Co-juror Ausgang uses bright, cartoony pinks and and blues and greens and yellows, bright colors highlighting ideas that are often starkly dark. He says online he "draws influence from as many outside channels as possible, preferring the toy contents of grocery store gumball machines over the latest exhibit at the Whitney. Opinionated but informed, he is able to see the beauty in both a Rembrandt and a rat rod. This variety of interest has led him to design his artwork on the computer but complete it on the easel, the perfect combination of new technology and traditional media."

It's a perfect setup for curating the best "darkness" memes for "After Dark 7."

Although he is beyond comparison at this juncture of his international career, Ausang's vibrancy and wild distortions are reminiscent of Max Ernst's 1937 piece "L'Ange du Foyer ou Le Triomphe du surréalisme." It is especially notable in the hand and creature emerging from the right knee of Ernst's outraged angel, a warning of the ruin Ernst saw that fascism brings to countries, "a despairing reference to the fact that the surrealists with their Communist ideas had been unable to do anything to resist fascism." (max-ernst.com/the-triumph-of-surrealism.jsp

Forty works were accepted in "After Dark 7" through May 17, from a total of 26 artists in the blind, online jurying process. "All we got was the media, the size and the title of the piece," Moon explained, adding that the show ranges from the purely political all the way to purely romantic nightscapes.

Gary Aagaard's paintings, Moon said for example, are very political, very slanted toward the liberal and the left, "a lot of things about (President Donald) Trump, the degradation of the (Environmental Protection Agency), Trump using the office to enrich himself and his family."

At the opposite end of the spectrum is the moody and lovely nightscape photography of Elida Hanson-Finelli, who retired to Taos after a 45-year flight attendant career.

"Most of the subject matter I have exhibited since starting this portion of my life and creative journey has been about documenting the beauty I see around me," Hanson-Finelli writes in an email. "I have endeavored in times past to cover the heartache and more downtrodden parts of the world, but it seems not to be where my heart is nor my forté. Others have excelled at it, not me. I feel my place, at least for the moment, is to document the beauty that surrounds us and is often overlooked. Also, these places will eventually disappear!"

As Moon says, there's something for everyone in this show, stressing that Taos is known throughout the world as an important modernist art colony, not just Southwestern cowboy- and-hollyhock art. "That's one of the things about this show. It gets us out there as the important art colony we really are."

The show will be on view through June 30. Admission is free and the public is invited. For more information, see gregmoonart.com or call (575) 770-4463.