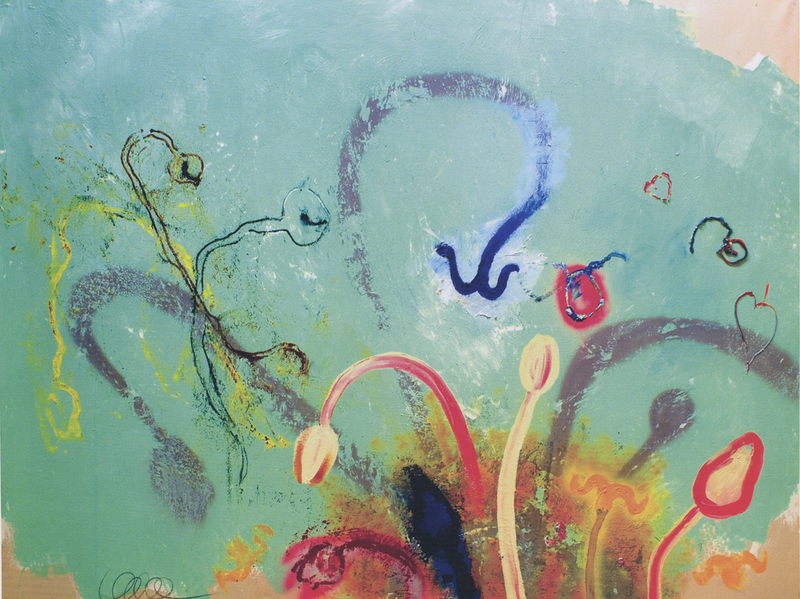 Who is Dewey Crumpler?

The name could have been lost in the back pages of an Elmore Leonard novel.  Instead it hangs above the best art show currently in Los Angeles.  A modest wing of the California African American Museum is packed with paintings, sculptures, etchings, videos, and installations. Curator Mar Hollingsworth was attracted by one piece in the museum’s permanent collection, “A Day in the Park, #4”.  When she went fishing to see what else the artist was up to she came across this body of work: the equivalent of getting a nibble and being swallowed by a whale.

“A Day in the Park, #4” is a painted sculpture—a Monet painting stripped of sensation to reveal the architecture and guts below.  Scribbled greens and casual swirls of blues sit nonchalantly on a system of pipes, glass, and wood.  The dressed-down colors rest like sweat pants on an avid jogger.  It sits in the same room with a mixed media piece, “Untitled” 1996.  A fluttering gold depth spotted by pink petal shapes and sutured with pink spray paint gives birth to an arc of flower buds, skidding broadside toward your eyes.  The ragged family portrait of flowers assembles and disbands joined by a handful of heads—art historical cutouts—who might have married in.  Sleeping below “Untitled” is Crumpler’s sketchbook, under glass for our safety.  Splayed open like a bear trap, two collages sprout tulips in every direction.  There’s a photo of Eric Satie and one tulip grows from his head.  Listen closely and it’s a piece by Satie playing underneath the video interview of Crumpler behind you.

In it he’ll explain his attraction to the tulip as his metaphor of choice, but that will do you little good in understanding how he puts it to use.  His interview sits in the percussion section, and while his words thump out a rhythm all the meaning is stuffed into the silence between beats.

Eight great paintings await, braided together by the twisting stems and suggestive petals of tulips.  But there is a hiccup of sculptures before you get there: fantastic figurative pieces (“Torso”, 1, 2, and 3) of found wood, half painted, and decorated by tiny pins.  They are relatively small and compact but their size has no relation to the scale of how they are experienced.  Keep moving.

The next room of paintings is astonishing.  Each is generously sized, just beyond the fingertips.  Figures fall and swim with twisting tulips.  These and a catalogue of other forms scatter and bend through space.  Space itself shifts, sometimes literally pinned down, but most often breathing, and sometimes smashing passages of form.  Add to the mess a range of lights: flat frontal light, streaks of neon, glowing after images, and in the case of “The Cup” four or five gaslamps.  The paintings have power, vocabulary, and techniques extending into too many distinct directions to summarize.  By the time you see the squiggly heart dangling toward the edge of “Tulipism” you’re left with the impression that the artist will do whatever he damn well pleases.  A bed of pale mint green stretches from the top left corner toward the other three corners, threatening to eclipse the piece in its sensuality.  A bouquet of tulips rises to meet it from below.  Not without a struggle, however, as a jealous light casts a silver, medusa-like shadow above the flowers—a net to drag them back down to a mean and common reality.  Then the artist squirts out a heart or two off and up to the right.

The tulip is Crumpler’s Trojan horse, or noble lie (Plato comes later in the show).  Its suggestiveness and sheer flexibility allow Crumpler to do whatever he wants.  In the next room a handful of wood sculptures of tulips hang on narrow panels.  Remembering the “Torsos” one is inclined to grab Kippenberger by the ear and show him how a painter should sculpt.  Surrounding the tulip sculptures are reckless works on paper.  Among them is “Untitled” 1995, that features the bottom of a tulip that doubles as a blue asteroid.  Its stem sucks from a small mess of paint clutching a latex glove like a used prophylactic (“Call me…”).  The glove and mess are resurrected and redeemed by a shadow puppet behind and to the right.

Crumpler’s other visual mantra makes an appearance: a ceremonial African neck piece that was used as an instrument to call the spirits.  It was appropriated by slave owners as a surveillance device.  Crumpler takes it back and plugs it into chic paintings, a brilliant arts and craft outing, and the centerpiece for an installation.

There are two problems with the show; one the museum’s and one the artist’s.  His glass etchings need to be rescued from their installation.  They make a room for them and place them as small windows, arranged melodically throughout.  But it’s confusing to look at these subtle pieces while trying to ignore what’s seen behind them.  The catalogue shows these pieces individually, and one is left with the hunger to see them in person the same way to register their silence and the game of shadows.  The artist’s mistake is a corner installation of paintings.  “Narrative 3” has a phantom hooded figure strolling through pages of art history.  Embedded are brilliant moments, but taken as a whole the piece falls victim to artful arrangement, clear thoughts, and technical virtuosity.

The installation “Narrative 4” sits in an oval room near the end of the show (followed by a denoument of more, great works on paper).  The shackle form lifts up or tilts down as an alien microscope peering in on a small garden of artificial tulips lit cinematically.  A video projection of the ocean sits nearby on the floor—surrounded by the curves of an oval room, the tulips, the rounded shackle, and the shackle’s corrugated white plastic casing, the edges of the projection look especially sharp.  There are three different sound pieces dropping down from speakers placed in the wall.  The sounds of water fall from the two at the ends, and the sound of gospel humming comes from the middle speaker.  A walk through and around the installation leaves you shifted and slightly transformed, your mind plucked and replanted.

Give the museum a lot of credit here.  They locked in this show long before “transformational figure” became a hip endorsement.  Let’s be clear what Crumpler would do with the tag.  He would snap it, chew it up, twist it, and put it at the disposal of one of his various compulsions.  A black president just shows that politics is always leagues behind when changing the supposed rules of culture—race included.  I’m reminded of the bittersweet tears of Jesse Jackson on election night.  The dream had arrived, but it didn’t look like he expected (in his case the mirror).  Crumpler thwarts expectations in exchange for new visions.

The intensity of Crumpler’s art—its sheer energy and multiple valences—transcends the pursuit and capture of personal liberty.  “Certain blacks dig thay freedum” is literally pinned on one of the torso sculptures.  But the phrase is neither ironic nor declarative.  It operates as a quote.  The method distances the artist from the power of the piece.  He’s getting out of its way.  Simone Veil discussed political rights as a sucker’s bet, as if the Devil was negotiating a better price for your soul.  Crumpler’s works escapes various traps of expression, choice, and ‘freedum’ by plunging headlong into the demands of each piece.  Surface as the fire of self-immolation.

Amber Renaye Answers 5 Questions
1/14/19
COMMENTS (1)
Hi
I haven't seen the show. Nonetheless Mr. Temple's review is really outstandingly multi-dimensional. Everything an artist only dreams of connecting with. Now I really WANT to see the show. Excellent writing throughout.
Comment by: Bob Leyba on Wednesday 03/04/09 at 7:44 PM
ArtSlant has shutdown. The website is currently running in a view-only mode to allow archiving of the content.