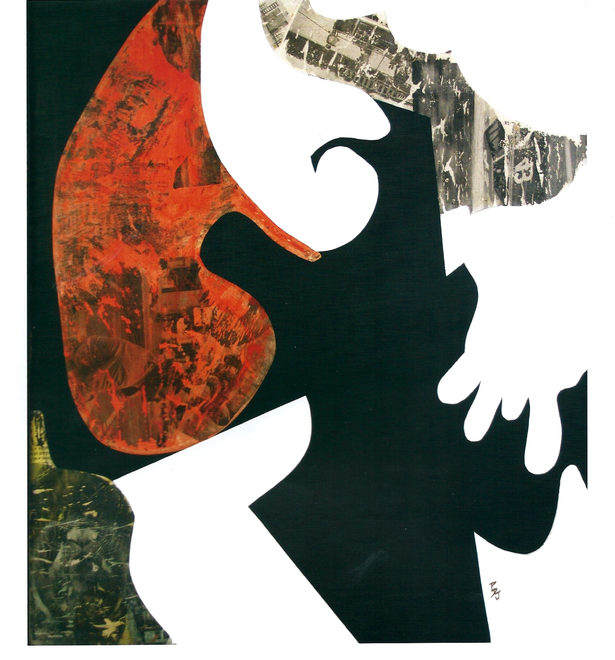 For the Culture: Towards Curating Black Art by Aesthetic, Not Struggle

Unlike recent major shows that are chronological surveys of Black art in the context of political upheaval and communal struggle, the exhibition Transformative Space centers the aesthetics, techniques, and innovation of its artists. Now at the August Wilson Center in Pittsburgh, the exhibition magnifies the interstices of the Black experience that push against the historical watersheds that have come to over-define Black life. The onus of Transformative Space is not to couch Black art as a mere reaction to political oppression orchestrated by lethal white imaginations; instead, it draws on what can be revealed in Black aesthetics when we come to them as a way to animate the imagination and examine the innovative capacities and techniques of its artists. The exhibition honors Blackness not because of hardship—it honors Black artistry for Black artistry’s sake, which is enough of a reason. 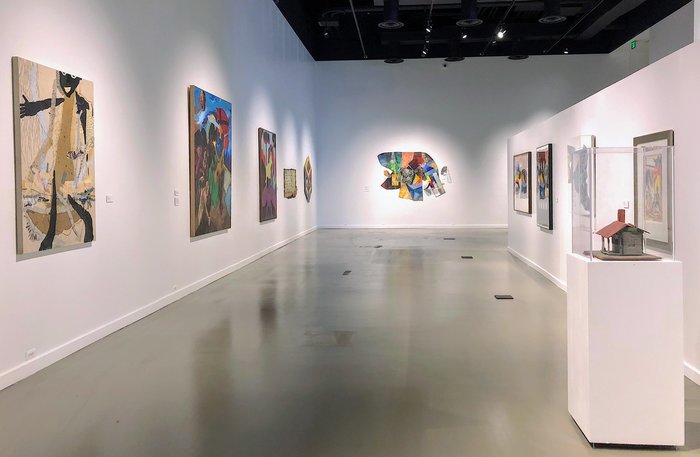 The exhibition asks about the sometimes wild, sometimes shocking, narratives and methodologies that appear on the canvas as a result of a Black artist’s passion for their process. The primary context of Transformative Space is not suffering, but craftsmanship and artistic enterprise. Be it Jack Whitten sculpting ravines into his tesserae pieces with an Afro-pick, Allie McGhee folding multi-hued canvases into lovely cramps of color, or Rashid Johnson turning a scan of his elbow into a work of compelling minimalist art, the show’s gravitational center is the experimental and creative urge. 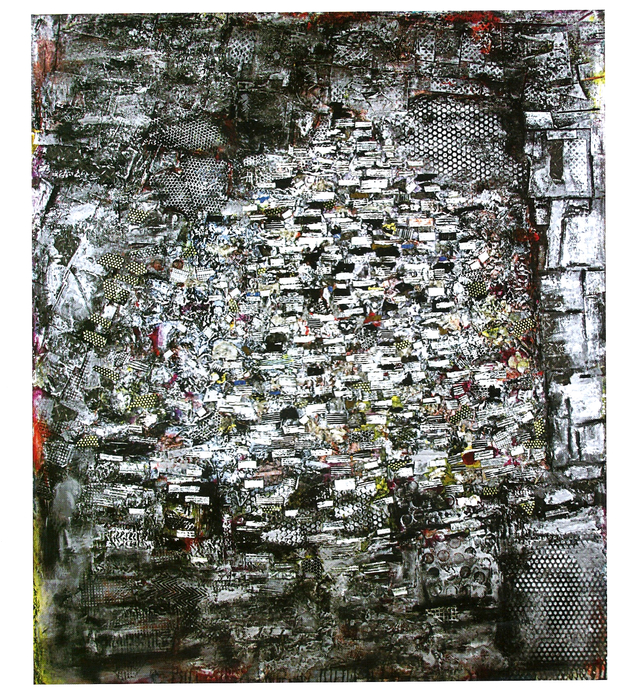 Transformative Space: The N’Namdi Collection brings together 29 rare works from George and Carmen N’Namdi’s Detroit-based collection of predominantly abstract post-war and contemporary work by artists from the African Diaspora. The 250-work collection is invaluable not only in its dedication and promotion of these artists, but also in the way its diverse assemblage speaks to a universal human experience. In this latest collection presentation, Pittsburgh-based art historian and curator Kilolo Luckett sets a new example for how to properly highlight, honor, arrange, and contextualize the works of these master artists. Although the August Wilson Center is smaller than the Brooklyn Museum or Tate Modern, which both staged surveys of Black American art in 2017, its position as an institution of Black arts provides the opportunity to transform the context in which said art is analyzed. The curatorial mandate shifts from historical justification to revealing the merit inherent in the style, experimentation, and daring. The artwork in this space can be appreciated for the dialogue it generates with the art world rather than isolated in a tokenized corner. 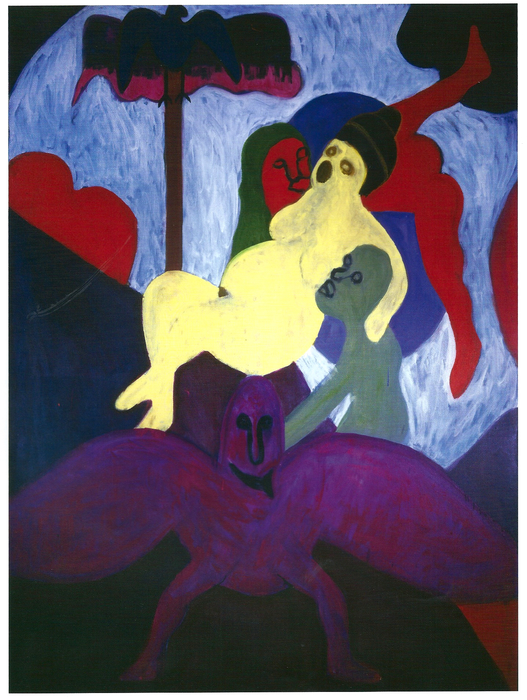 The historical contexts for a number of prominent exhibitions of Black art recently have been revolution and politics, comprised of artworks viewed through the lens of their engagement with the sociopolitical and sociocultural ails of their time. Larger art institutions seem preoccupied with this spectacle of overcoming, rather than the ways in which Black artists’ work is intricately woven within art history more broadly, and is in conversation with work by non-Black contemporaries and forebears. Bob Thompson and Henri Matisse, for example, share similar tastes in color and form: it is clear that Matisse influenced Thompson, who then distilled this influence in his own imaginative and technical manifestations. All artwork is multidimensional in its function. Yes, Black artists—like all artists—respond to their circumstances; but they also create and experiment in techniques that are new to the art world in their time. 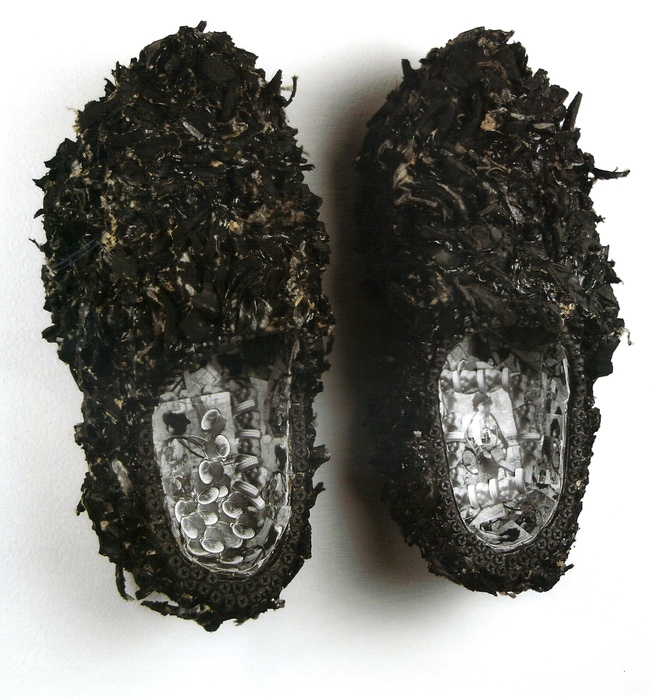 The works in Transformative Space have several aesthetic values in common: layering, texture, and exploration with materials and themes. Highlighting interrelated narratives of color and form, tracing relationships between work non-chronologically, Luckett makes each artwork memorable, specific, and present in its designated space. An example of this balance and harmony is how Whitten’s Summit (1998) a dynamic mosaic of black, grays, and greens, interacts with Chakaia Booker’s sculpture, Pioneer (1995–1998), a pair of slippers made from tires. The slippers’ bristling textures not only call upon the tactile quality of Summit, but also summon sustainability and environmental themes, which were important in Whitten’s work as well. Installed in a triangular matrix, these works hum in tune with the layered hues of Ed Clark’s The Circle (1968), which shares the black and silvery undertones of Whitten and Booker’s pieces. 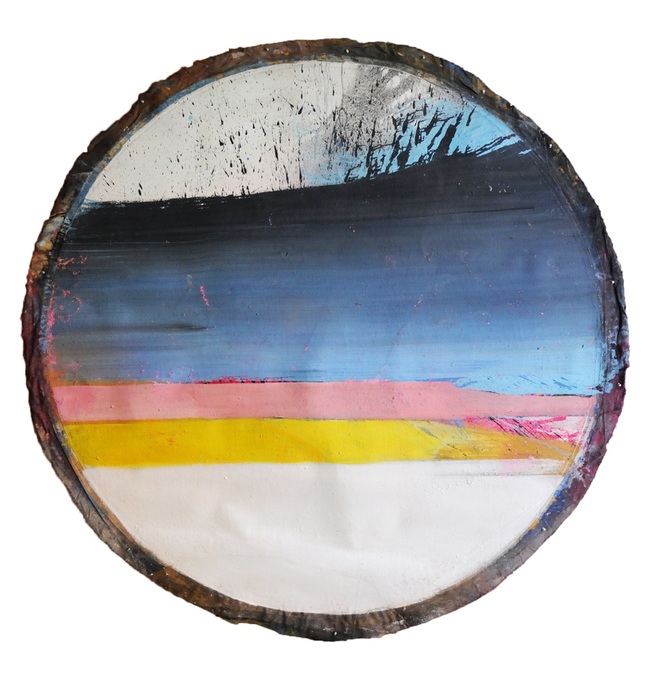 Ed Clark, The Circle, 1968, Acrylic on canvas, Diameter 72 in. Courtesy of the N’Namdi Collection, Detroit

Characteristics such as color, line, and texture might seem like trivial formal connections on which to build curatorial relationships in 2018. Yet, few Black artists have been afforded the luxury of having their work celebrated for its formal qualities, for its technical and material experimentation. Permanent collections of museums of Modern art around the world, on the other hand, have organized work by (predominantly white male) artists using these very principles for decades. At the August Wilson Center, the N’Namdi Collection doesn’t need to provide an excuse to a predominantly white audience for why these works should be seen. This exhibition’s heart is the joyous canvas that encapsulates the energy of artists pushing themselves to the creative limit to emote their interiority as people. It speaks to how Black positionality can be deeply specific and puissant, yet capable of piquing the imagination of any viewer. 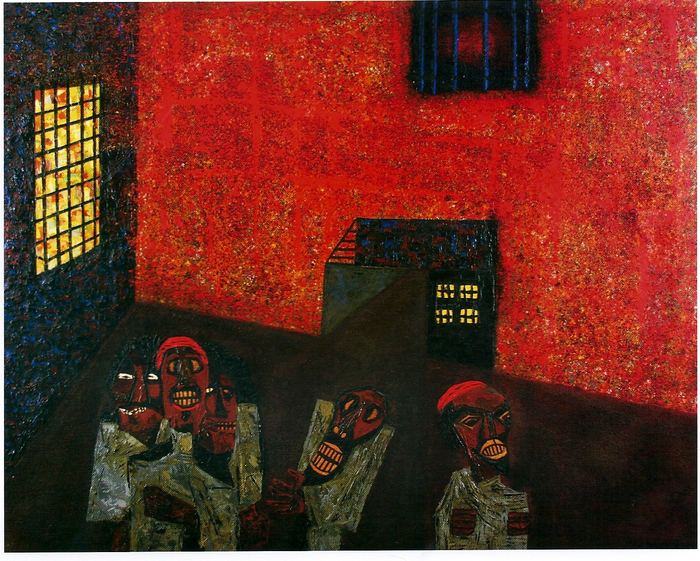 An example is Vincent Smith’s painting In the Yard (1972). Across the foreground of the painting are four Black men in identical prison uniforms, their faces reminiscent of the angular feminine figures in Picasso’s Les Demoiselles D’Avignon. A dark hallway opens up behind them, an opaque yellow light illuminating their house of incarceration. A barred window reinforces their looming captivity. Yet, to the left of the men, behind the grate of their cage, possibility is formed through light. Different from the yellow interior glow, the outside luminosity is built up of supple autumn reds and oranges, with lime green highlights. This is an image that portends suffering, but it is not on display because of its narrative: the work is a study in light. Its aesthetic responds to the fantasy of Les Demoiselles, a gorgeous, but masculine vision of femininity with the potential that the “Africanized” faces tickle in the white imagination. Through stylized figuration Smith reveals the realities of mass incarceration that have been with the United States since Reconstruction.

On the same wall is the first work collected by the N’Namdis: an abstract painting by Phyllis Diane Jones entitled Stan’s Dance (1968). Made of distressed mixed-media images and fields of curling black and white space, the orange-red field dominating the left-hand side of the image plays call and response with Smith’s painting. The juxtaposition based on color and aesthetic as opposed to chronology fosters a harmonious and balanced visual relationship, enhancing the abilities and creative impulse of the artist—it allows the work to be better seen on its own terms. 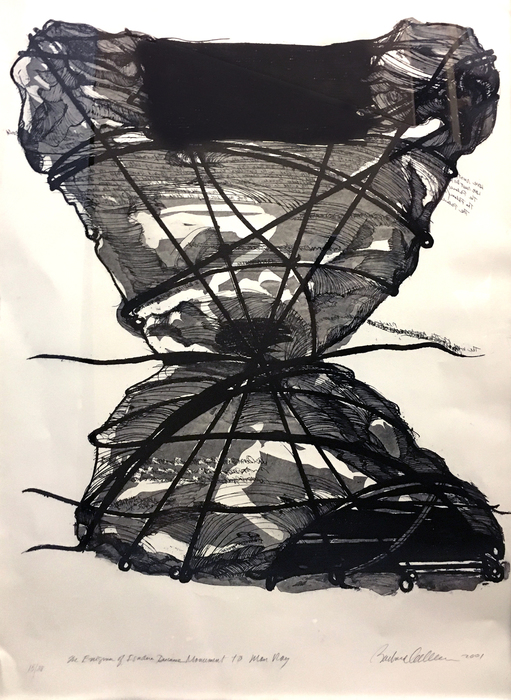 Barbara Chase-Riboud, The Enigma of Isadora Duncan Monument to Man Ray, 2001, Monoprint, 32 x 25 in. Courtesy of the N’Namdi Collection, Detroit

Another wall lines up high contrast works with playful essences. Rashid Johnson’s Untitled (Manumission Papers Series) (2000) and Leonardo Drew’s Untitled (2014) share tinny, earthy palettes; they are sparse in figures, but high in texture and delicate evidence of the artists’ hands. They communicate in line and color but their subject matter tends to the idea of freedom and the endless possibilities present in minimalism. Capping this installment is a rare two-dimensional work on paper by Barbara Chase-Riboud, The Enigma of Isadora Duncan Monument to Man Ray (2001). We see her artistic obsessions: her handwriting is present; ropes form a girdle around draping lines, shaping an almost topographical space. Although two-dimensional, Chase-Riboud’s sculptural sensibilities signal a palette change as well as a spatial one; it offers a bridge from Johnson and Drew’s minimalist artworks into the louder conversation taking place between Sam Gilliam and Allie McGhee. The latter two artists paint in psychedelic brightness, shaping their canvases into three-dimensional bodies as a way to experiment with space. There is no limit to the amount of passion Luckett has unleashed in building relationships between these diverse works. The artworks, some still political in nature, are a laying bare of interiority and imagination. 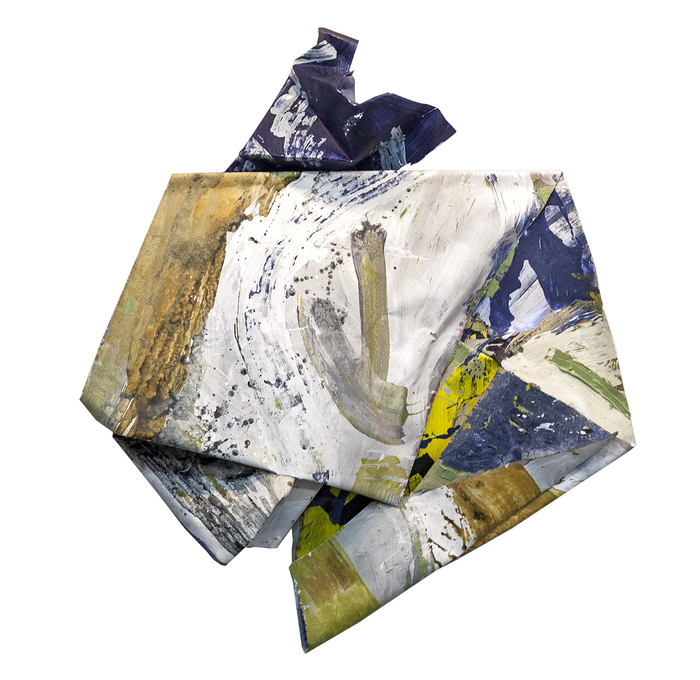 Transformative Space is an important signpost to remind curators and viewers alike that there is a way to curate and enjoy Black Diasporan art that eschews the reissuance of status quo gestures of tokenism, isolation, and historical stereotyping. Transformative Space reveals how the absolute, remarkable capacities of humanity demonstrated through artistry can be unveiled, named, and acknowledged. With in-depth and caring curation the art world can approach Black art for the sake of what has been sweat and emoted onto the canvas; for the sake of its bravery, risk, and ultimate form. It is time that Black Diasporan Art’s place in the art historical conversation be expanded and diversified as a way to honor and match its daring.

Jessica Lanay is a poet and short story writer from the Florida Keys living in Pittsburgh. Her work can be found in Salt Hill Journal, Tahoma Literary Review, and is forthcoming in Fugue and The Common.