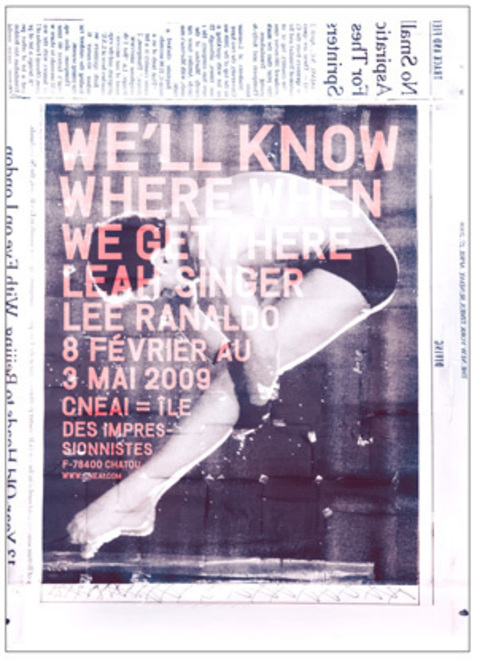 A Poetic and Virtuosic Collaboration

A short RER trip from Paris and a long pedestrian sidewalk on a busy highway bring you to CNEAI, located in Chatou on the flatteringly-named "Island of the Impressionists", a rather uninspiring ivy-banked tract of land in the middle of the Seine with a view of the passing barges and some industrial scenery.  Perhaps it looks nicer out there when it's not winter, but there's no reason to wait until then to come out and see the exhibition by musician and poet Lee Ranaldo (from Sonic Youth) and video- and visual artist Leah Singer.  Singer and Ranaldo have been collaborating together with sound and film for well over a decade, their principal work being the improvisatory live piece Drift, combining Ranaldo's droning guitar and beat-inspired poetry with Singer's "film-scratching".

Ranaldo's and Singer's exhibition at the CNEAI, We'll Know Where When We Get There, is the culmination of the artists' residencies in 2007 and 2008 at the CNEAI's Maison Flottante, and comprises of many parts: the visual exhibition itself, on view in the two levels of the gallery; performances by John Giorno, Rhys Chatham and others on the inaugural day; a radio broadcast and related public event in April; and an album with artwork and liner notes by the curators.  Besides the inaugural and radio performances, unfortunately the music is available only on a limited edition LP, and having no turntable in my abode here in Paris, I wasn't among the willing to shell out 40 euros for the collector's item, so I admit that I haven't actually heard it yet.

Being on a cheaper budget, instead I contented myself with the ambitiously free performance on February 8th.  I say "ambitiously free" because the organizers had perhaps underestimated the appeal of a free performance by "one of the dudes from Sonic Youth" and 60's chanteuse Brigitte Fontaine (judging from her reception by the crowd she was a huge draw), and by the end of the evening the steaming gallery was far beyond capacity, packed shoulder to shoulder with no space for the film projector, which was valiantly held aloft for the entire performance atop the head of a dedicated volunteer.  True to form and expectation for a pioneer of experimental noise-rock, Lee Ranaldo played a guitar suspended from the ceiling, alternately banging it with drum sticks, drawing a violin bow over its strings, and setting it off like a pendulum over the heads of the crowd.  Leah Singer's video accompaniment, besides being a bit shaky, was striking, slowed, ranging from concert footage to shots of trees and fireworks.  I can't say much for Ranaldo's musical accompaniment, however, which consisted of an overzealous electric cello player in silver spaceman pants, and a Lester Corncrake look-a-like on electric bongos.  Even the drug-ravaged Brigitte Fontaine looked like she was trying too hard, and it just wasn't working, her voice grating, reliving each and every cigarette she'd smoked over the decades.  It started to get pretty weird and desperate toward the end.  (See videos of the performances here. 1, 2, 3, 4)

Luckily, before the CNEAI got chokingly full of bodies, I got to actually take in the visual exhibition by Ranaldo and Singer, consisting of works on paper arranged in clusters on the walls of the lower-level galleries.  It's interesting to note that the work is unaccompanied by texts or pointers as to who made which piece, and so we assume that the whole show is collaborative, as one might expect from the artist duo.  Yet as one spends more time with the pieces, we find that there are several series in play, and their connection to each other is not readily apparent or observable.  Singer's experiments with, etchings, serigraphs and embossing, imprinting patterns on paper, are along very different lines than Ranaldo's newspaper paintings and monotypes.  It seems that during their residency, Ranaldo was working on his stuff, and Singer was working on hers.  It doesn't not work, however, and the works aren't entirely incohesive, but the show does feel a bit premature perhaps, as if the works are still in the experimental phase.

The most successful of them are Singer's gorgeous embossings on colored paper, richly textural and delicate, and Ranaldo's monochromatic paintings overlaid with bright, stencil-letter text, which lapse from the poetic to the conversational.  But the real treat of the exhibition is found upstairs in the video room, where you can sink in and enjoy the intensely poetic, virtuosic, collaborative films; Hoarfroats, Drift, Blind Performance, Here and ILOVEYOUIHATEYOU; that highlight just how well these two work together.  It's an enveloping experience, and where you should spend most of your time at the show.  These are impressive works of art: their sounds and musical reverberations, personal stories and poems, compelling images and beautiful sequences will make a deep impression.  What will stay with me personally, is a scene of leafless trees in a strong wind, with the film ever-so-slightly slowed, capturing the poetic beauty of this copse of trees bending and swaying, their strong branches more flexible than you could imagine, so resilient and so dynamic.

On the 26th of April at 22:10, We'll Know Where When We Get There, will be aired on Radio France Culture.  Bring your transistor radios to the CNEAI for a live, public event.