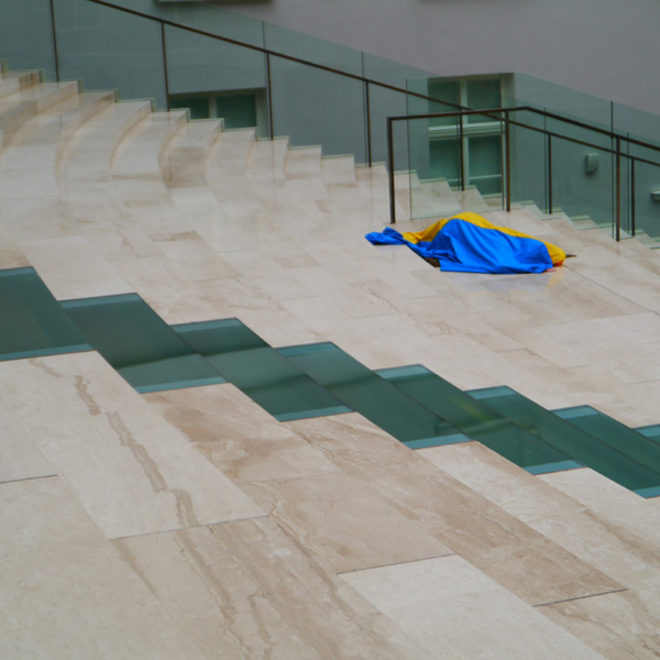 What Can We Learn from Art Boycotts Today?

When Manifesta, the roving biennial of European contemporary art, based its 10th iteration in Saint Petersburg, Russia, it sparked a wildfire of protests. This was 2014, and opposition to the relationship between the biennial and the cultural core of Russia was robust and complicated. Protesters objected to an administrative body responsible for repressive laws, enacted by Putin, that criminalized the LGBT community, the suppression of activists and dissenters, the annexation of Crimea, and so on. Maria Kulikovska was among the artists who withdrew from the biennial, and would later stage a protest action where she lay, wrapped in a Ukrainian flag, on the Hermitage steps. She proclaimed in an open letter: “As an artist and a citizen of Crimea, Ukraine, I cannot take money from the hand that brought trouble to my family, forcing them to flee from our home. I do not know what else I can do except hope that our boycott, our silence, which can sometimes be amongst the loudest cries of the world, can stop this war and only then proceed to the ‘production’ of art.”

High-profile boycotts such as Manifesta 10’s rekindle the long-standing dispute about the efficacy of acts of non-compliance, particularly ones uniquely situated within the art world. Boycotters who demand voice and agency are criticized by skeptics who demand a clear end-game for the commotion. The latter are often quick to deny the potential for boycotts to strike a blow to broader economic and political systems, or even effect any substantial change within the art sphere itself. Further, these debates recurringly circumambulate a set of questions: How can a boycott’s success be measured? Is it a meaningful action of solidarity with broader struggles? Is withdrawal less conducive to transformation than engagement? Is it a pointless and self-defeating pursuit, an attention-seeking antic? 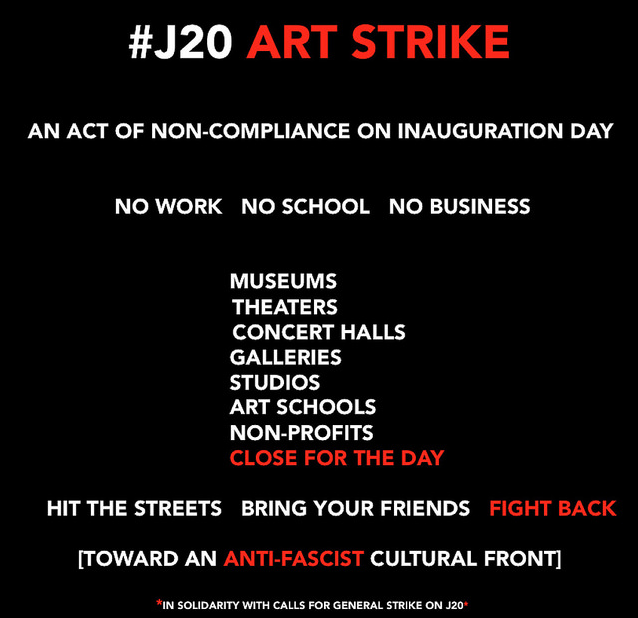 Perhaps wanting the last word on the matter, Manifesta 10’s head of public programs, Joanna Warsza, assembled and edited a reader on boycotts and contemporary art called I Can’t Work Like This, published by Sternberg Press this January. While the book’s essays are split into sections related to specific protests (boycotts of the 13th Istanbul Biennial, Manifesta 10, 19th Biennale of Sydney, and 31st Bienal de São Paulo), the parameters of “art boycott” shifts depending on the particular writer. Some stick to withdrawals by artists; others group boycotts with strikes, protests, and further acts of non-compliance that include institutional critique and exhibitions with dissenting content. In 2017, art boycotts are an ever-present part of the cultural and political landscape. The #J20 Art Strike in January, which called for the halting of work on Inauguration Day, counted over a thousand artists and institutions as signatories. Amidst broader conversations about the possibilities and limits of individual or group acts of refusal against cultural and political regimes, it seems an especially opportune moment to reflect on the discourse surrounding art boycotts and general boycotts, and focus on the political and cultural shifts that changed public attitudes toward artists’ transformative potential on politics.

Boris Buden, in the essay “Fetish of the Boycott,” declares boycotts “a mechanism of exercising superiority.” They have “no real impact,” he goes on, citing the Manifesta 10 boycotts as lacking a “real influence on Russian politics.” The protest actions around the biennale included Kulikovska’s aforementioned performance and a petition launched by artist Noel Kelly, whose demand to suspend Manifesta 10 “until Russian troops are withdrawn from the Ukraine” garnered over 2,000 supporters. Later came the public withdrawal of the artist collective Chto Delat, followed by the withdrawal of artist Pawel Althamer. To Buden, although the boycotts involved dozens—thousands if you count the petition cosigners—policies and institutions remain unbudging, rendering these actions futile. Not only futile, he claims, but hypocritical, as artists are inherently complicit in matrices of subjugation by way of the art world’s unequal relationships to other industries and the state (for example, art institutions’ entanglement in the prison labor system, as Cameron Rowland demonstrated in the work 91020000). Boycotts, argues Buden, are a “fetish” action “to calm tensions that arise from contradictions.”

In his essay “Notes on the Art Boycott,” Dave Beech articulates a similar, albeit less patronizing, analysis of art boycotts as a symbolic gesture. Beech differentiates between the industrial strike and the art boycott, noting that the latter’s withdrawal of labor typically doesn’t have the direct impact on productivity and profit of mass organized workers’ strikes. He links the lineage of art boycotts instead to consumer boycotts, “dependent on the aggregation of individual acts” of ethical consumption, and the ’70’s movement of institutional critique, which reasserted political activism into art. Practices such as institutional critique, and later social practice art, attempt to make visible the underlying forces of art institutions and systems, approaching art as a conspicuous platform for ethical, moral, and civil ideas. 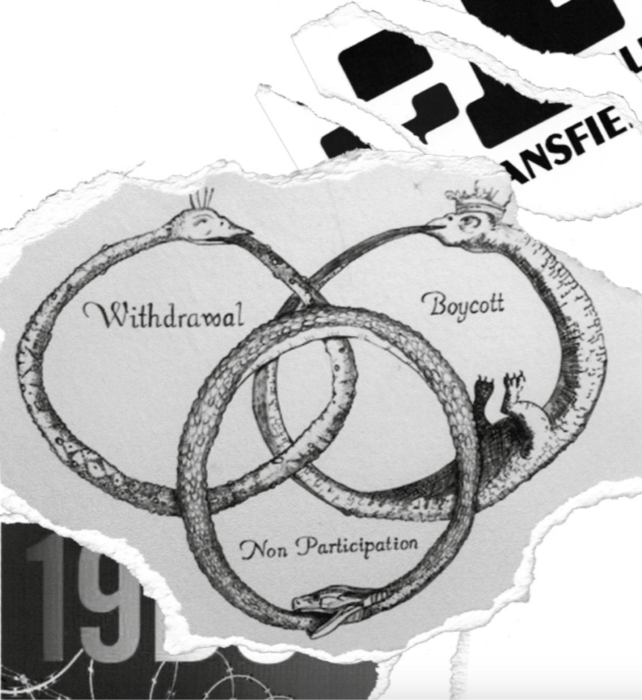 Joanna Warsza and Ágnes Básthy, from I Can't Work like This: A Reader on Recent Boycotts and Contemporary Art. Sternberg Press, 2017

The criticism of art boycotts as a conspicuous and even aestheticized gesture of political action is similar to the enduring criticisms of institutional critique, relational aesthetics, and social practice, all subsumed under the umbrella of overtly socially and politically engaged art. In a critique of social practice art, critic Ben Davis claims that artistic practices that are posited as politics tend to emphasize individual efforts over collective organizing, overshadowing the politics at hand. Circling back to Beech’s distinction between art boycotts and general worker boycotts, unlike workers who strike to negotiate with a long-term workplace, artists often have less investment in maintaining their relationships with the institutions they’re boycotting.

In this formulation, boycotts are only deemed fruitful if they can deliver their demands—of halting a biennial, or forcing troops to end their occupation—and are otherwise considered self-serving. Arguments like these, preoccupied with rigid parameters of effectiveness, foreclose the possibilities of dissent. But history reveals rich and abiding relationships between art and politics, and Gregory Sholette’s essay in I Can’t Work Like This lays forth a compelling counterargument for the claims that the two are mutually exclusive. Instead of focusing on the influences of institutional critique, his essay “Art Out of Joint: Artists’ Activism Before and After the Cultural Turn” traces the catalyzing moments for art and politics in the ’60s, when “loosely organized coalitions brought cultural producers together with student protesters, striking workers, and civil rights activists in acts of political solidarity.” As examples, Sholette lists Artists and Writers Protest Against the War in Vietnam, citing it as the first overtly politicized postwar artists’ collective; the militant tactics of the anarchist collective Black Mask/Up Against the Wall Motherfuckers of ’66; and Situationist International’s affiliation with striking university students in France in ’68. These actions were integrated with broader struggles, in support of the anti-war movement and striking workers.

Sholette notes that artists’ engagement in direct protest considerably narrowed by the ’80s, as “tradition-bound cultural institutions and art world patrons pushed back against this dangerous blurring of categories.” While art boycotts grew again in popularity, their value had diminished as the art world backed away from “notions of wholesale social and political confrontations and change,” and many became disillusioned by artists’ muddled interpretations of the political, which conflated collective resistance with daily individual decision-making, aesthetic experimentation with political organizing. 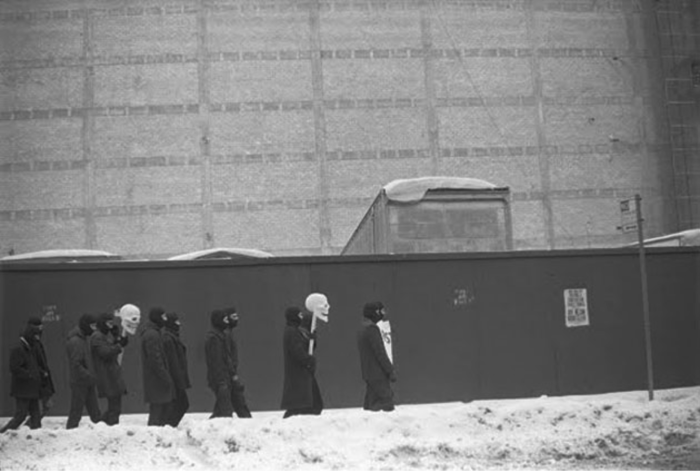 Black Mask group on their way to Lincoln Center. Via Journal of Aesthetics & Protest

The tensions and contradictions within the profusions of “resistance art” are encapsulated in the boycotts of Creative Time’s 2011 exhibition Living As Form, which focused on socially engaged art. Creative Time’s artistic director Nato Thompson wrote of the exhibition that “[living] itself exists in forms that must be questioned, rearranged, mobilized, and undone.” The boycotts protested the show’s tour stops in Israel, drawing attention to the hypocrisy that a show of politically engaged art was “appearing at Israeli venues including Technion, a university with ties to the Israeli military.” Artist groups such as Decolonizing Architecture and Allora & Calzadilla eventually pulled out. For certain audiences, the controversy pinpointed the loss of faith in art to engage in political resistance in material ways. While relational art, and even social practice, was developed to form constructive opposition and restitch the disconnections between people and their communities, these intentions had been subsumed by the art world as a new category, the political entrée in the aesthetic menu. 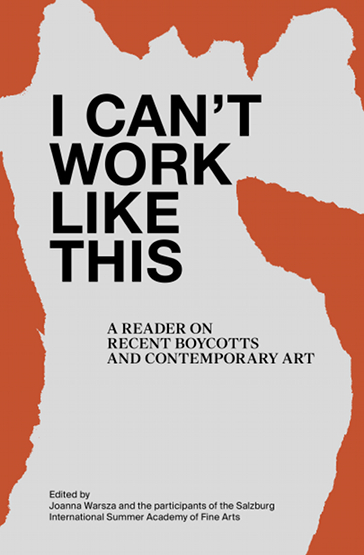 How can we reinvoke the history of art boycotts as acts of political solidarity? It’s a question that isn’t as lofty as it is dire. Boycotts are among the only forms of direct action that many artists can access in these situations. To revisit the words of Manifesta 10 boycotter Maria Kulikovska: “I do not know what else I can do.” Boycotts, it can’t be understated, are often last-resort courses of action for artists, primarily marginalized artists, to push back against the oppression, appropriation, and tokenization that impact their lives and communities. This point is starkly absent from the criticisms of boycotts as self-serving. In recent history, we recall acts of refusal such as Adrian Piper’s withdrawal from the exhibition Radical Presence, and the YAMS’ withdrawal from the 2014 Whitney Biennial, both confronting racism in the curatorial decisions surrounding the exhibitions. These actions, some of the best-known instances in the arts in recent memory, asserted the power in refusal, as well as demonstrated the power of the symbolic gesture. They made clear that accountability wasn’t a backdoor bureaucratic process, but could be demanded instantly and materially.

Regarding the future of art boycotts, Sholette recommends that “the task is not to wield [them] solely for cultural producers or their elite audiences, but instead to turn it outwards towards whole populations that are increasingly caught in the cruel cycle of precarity.” At this moment, when the political potency of art is widely deemed depleted, when artists and institutions are experiencing a crisis of faith in their ability to respond to and challenge the socio-political contexts in which they find themselves, may these histories provide a compass, or at least the compass’ wind rose.

Minh Nguyen is a writer and organizer of exhibitions and programs based in Seattle.

Everything is Near: Culture Softens Violence in Manifesta 10 Group Exhibition
7/6/14

The subtle subversions of Manifesta 10
6/30/14
COMMENTS (0)
ArtSlant has shutdown. The website is currently running in a view-only mode to allow archiving of the content.