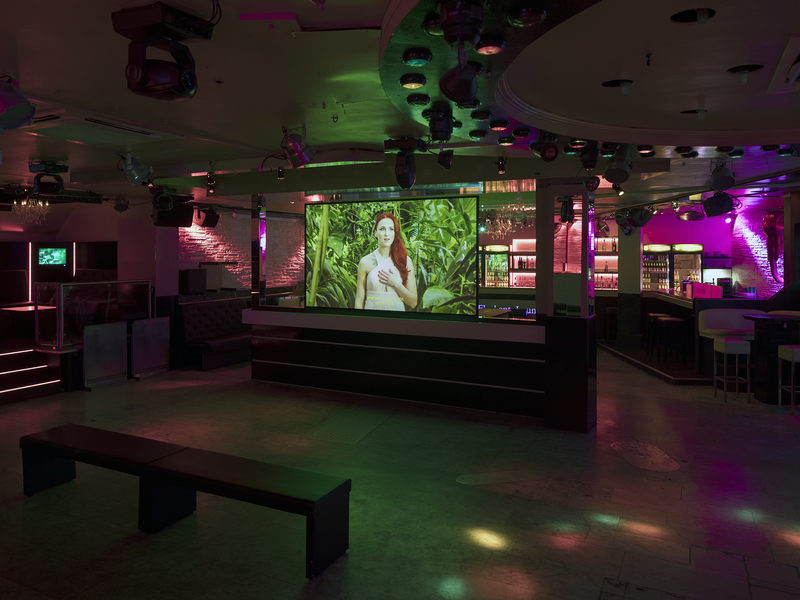 Distinct from the droves of international biennales and triennials birthed in recent decades, the Skulptur Projekte Münster (Sculpture Projects Münster) sets itself apart as an unparalleled cultural moment once every 10 years that places strong emphasis on site-specificity and encourages long-term artistic study. The decennial’s first edition in 1977, curated by Klaus Bussmann and Kasper König, sparked controversy by radically implanting works of renowned sculptors in Münster’s conservative public space. Then as today, the projects stood in stark contrast to the near-timeless city, whose postcard-ready urban fabric of reconstructed historical facades smooths out the city’s wartime traumas.

In the four decades since ’77, the Skulptur Projekte have come to be seen by Münster’s citizens and financiers less as a series of heretical interventions and more as a valuable cultural asset and unique selling point. Thus the recently inaugurated fifth edition, which gestures toward new territory in nearby Marl, renews its commitment to “public space” by addressing the different ways it is produced conceptually, representatively, and physically across social and geographic—or at least regional—divides.

This year’s Skulptur Projekte, curated by Marianne Wagner, Britta Peters, and Kasper König (who has remained on the curatorial team since ’77), continues to stand for a humanist—or at least human-oriented—version of democratic public space positioned against commodification, capitalist acceleration, and homogenization. They are able to do so by securing their own autonomy: from the beginning, the Skulptur Projekte have operated almost exclusively on public financing; they have been free to the public; and with König’s continuous artistic direction, they have been able to resist a desired tourism-maximizing increase in frequency. The established 10-year rhythm allows time for long durational projects to unfold next to sculptures that demand intensive planning and construction efforts. Being plural, the Skulptur Projekte are regarded more as an infrequent concatenation of singular sculptures and projects presented within a common frame, rather than a homogenizing entity. The themes addressed by the curatorial team in their process of invitation, evaluation, selection, and realization of projects fall into the background of a diverse public exhibition. What unifies the realized projects is a shared insistence on site-specificity, whether that is expressed formally, thematically, or both. 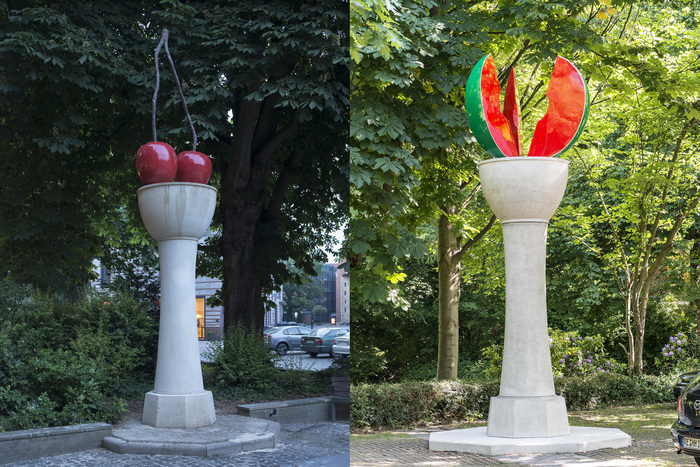 The Skulptur Projekte’s naming of a satellite location in the city of Marl, which hosts a joint project with the Skulpturenmuseum Glaskasten titled The Hot Wire, signifies a provisional shift in focus away from affluent Münster toward another more stymied city in the German state of North Rhine-Westphalia. König went so far as to refer to the city as an important “antipode” to Münster while discussing Marl’s concerning move to the far right in its most recent election. On the one hand, Marl, a municipality founded from an agglomeration of proximate towns in 1936, was marked by a utopian (first fascist, then modernist) orientation toward the future. In its relatively short history as a city, Marl grew rapidly to economic and cultural prominence, propelled by flourishing coal mining and chemical industries. It had planned for major population growth before deindustrialization and population decline set in at the turn of the 21st century. Münster, on the other hand, has long been an anchor in the history of western civilization, itself the site of the signing of the Treaty of Westphalia in 1648, which ended the Thirty Year’s War and set the foundation for a world system based on nation states. Münster is predominantly Roman Catholic, is home to around 49,000 students, and is known for its extraordinary bicycle friendliness—a model city whose debt to history still prevents radical modes of spatial practice from being enacted.

While the question of public space would be more starkly differentiated between Münster and a city in former East Germany or, say, a city closer to Münster’s true geographical antipode in Polynesia, the differences that arise between Münster and Marl become interesting in that both share a lasting affinity for public sculpture. In Marl, two open-air exhibitions took place under the header Stadt und Skulptur (City and Sculpture) in 1970 and 1972, featuring works of German sculptors alongside those of Swiss and Dutch sculptors, respectively. Just one year later, in 1973, the people of Münster were outraged by the installation of George Rickey’s sculpture Three Squares Gyratory in a public park, which gave rise to Skulptur Projekte ’77 as a response (and further provocation). As the story goes, Marl was once modern and optimistic about future growth, while Münster was dwelling in the past, ambivalent about the aesthetic trappings of modernity. The dream of Marl’s planners turned into the nightmare of deindustrialization, while Münster’s conservativism ironically led it eventually to become a Mecca for sculpture. 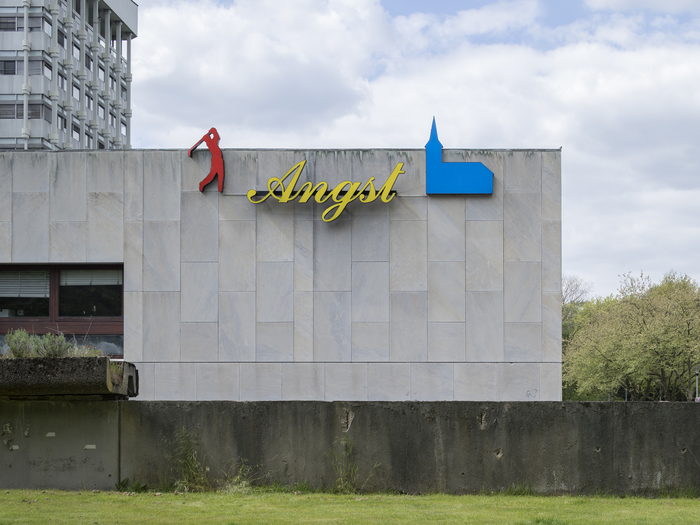 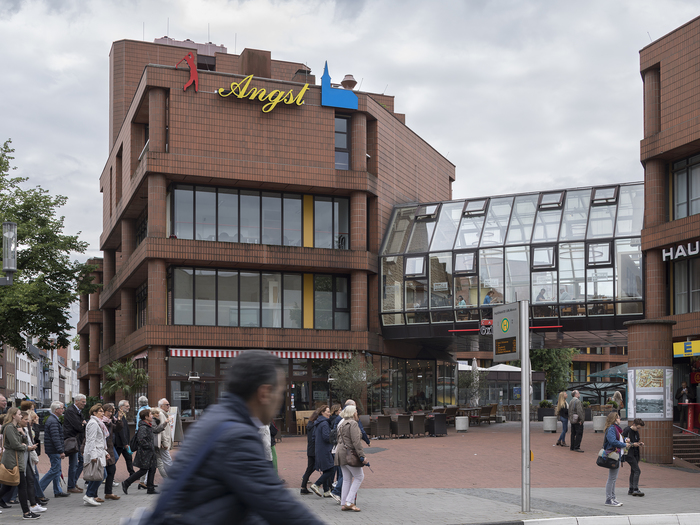 The Hot Wire addresses the linked but divergent histories of the two cities by means of material exchanges between them. Spurred by a straightforward idea to trade sculptures between the two cities, it evolved into a collaboration involving new productions. Artists Lara Favaretto, Thomas Schütte, Sany, and Joëlle Tuerlinckx’s new works made for Marl are complimented by temporarily transplanted sculptures by Richard Artschwager and Reiner Ruthenbeck as well as an exhibition of models from past Skulptur Projekte, including unrealized works. In reciprocity, Ludger Gerdes’ Angst [Fear] (1989) and Olle Bærtling’s filigree iron sculpture YZI (1969) have been relocated from Marl’s aging modernist city center to the environs of Münster’s central LWL-Museum, which hosts new projects together with an exhibition from the Skulptur Projekte archive.

The choice to bring visibility to Marl comes at a point when political discourse across Europe is lurching right, and other deindustrializing cities in Germany and abroad are forced to adapt their economies or fall into economic and social obscurity. As demonstrated by growing restrictions to freedom of speech worldwide, democratic public space as an imperfect humanist concept is (and always has been) under threat by latent xenophobia. As the far right manifests and metastasizes in public space, the old tools of political correctness and theoretical pedantry fail over and over again. Rather than addressing threats to public space by proselytizing a perceived audience with politico-aesthetic sermons, the Skulptur Projekte exhibit instead a highly localized practice, rooted in global concerns, that appeals to visitors embedded in a particular context. In Marl and Münster alike, everyday spaces become the starting coordinates for new lines of flight. 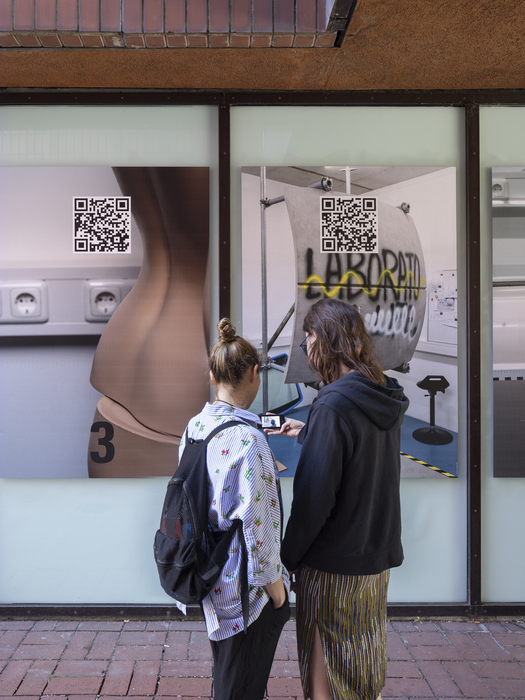 A total of 35 new works respond to specific local conditions for this year’s Skulptur Projekte. Spread mostly throughout Münster, with some in the aforementioned Marl, the projects include sculptural works and interventions ranging from the hand-held to the architectural in scale, as well as performative and video-based works. Several projects involve or even require the use of a smartphone or internet capable device in order to be accessed, opening up the internet as an extension of public space that at the previous edition in 2007 had only begun to go mobile (the first iPhone was announced that year). The few projects that not only exceed established notions of “public space” but, furthermore, invoke novel, even speculative vectors for its maintenance and development, make the greatest contribution to Skulptur Projekte’s renewed commitment to public space as a place for difference. The following projects—emblematic in their ability to broaden established notions of public space—represent only a cross-section of the extremely wide gamut of artistic practices involved in this year’s Skulptur Projekte. 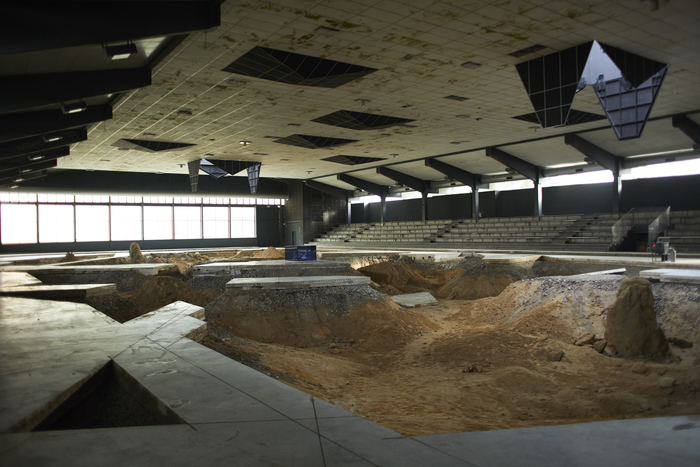 The most admired work of ’17 is likely to be Pierre Huyghe’s large-scale installation After ALife Ahead, which transforms a disused indoor ice rink into a technologically cultivated alien biotope. Before entering the building through a side door, visitors are greeted with yellow signs warning against bees and the risk of stumbling. Once inside, they are confronted by a heavily excavated ground plane with shards of the original reinforced concrete floor slipping and sliding into the raw earth below. Mud structures resembling giant anthills grow skyward from the pit, puddles with algae incubate yet invisible life forms, white peacocks tip-tap in the rafters, and small sea creatures swim about in a tinted-glass aquarium at the center of the rink’s scarcely perforated exoskeleton. All the while an air compressor emits spurts of unknown gas and a dim light sleepily pulsates in the aquarium. UFO-like black sunshades mysteriously open and close in the distant ceiling above—and with an augmented reality app, they fly around the artificial sky. If public space exists in the world Huyghe has constructed for us, it can only be the result of collaboration between living organisms and technological devices, or between terrestrial life and inhuman reason. 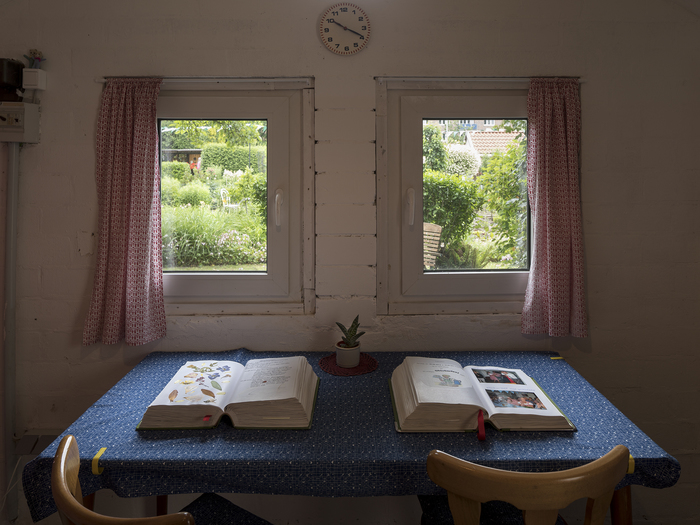 Jeremy Deller’s Speak to the Earth and It Will Tell You straddles artistic practice, anthropological study, ecology, and publishing. For Skulptur Projekte ’07, he asked some 50 garden allotment associations in Münster to keep diaries on the everyday life of their urban agricultural plots, which are not only used for growing one’s own fruit and vegetables but are also vital sites of social encounter. Deller handed each association a large, empty, hardbound green book to accumulate fragments like photographs, announcements, anecdotes, poems, pressed flowers, and so on. Ten years later, the resulting library is now exhibited at one such allotment association in Münster. Visitors are invited to leaf through the books and instructed to exercise caution: their next stop is in the museum collection. The work publicly exposes aspects of a culture that often stays obscure to those not directly involved, making a semi-private space fully public. Importantly, this act of “Veröffentlichen” (usu. “publishing,” lit. “making available to the public”) takes place directly at the site of its production, troubling the distinction between private and public even further. 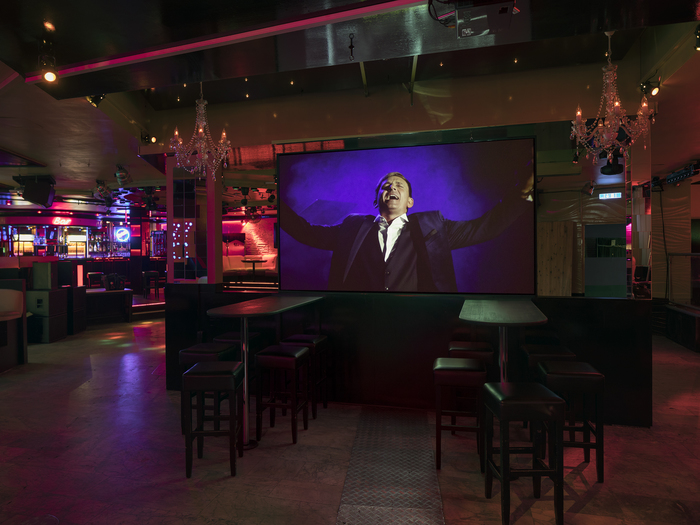 A third and final example—though there are many more to consider, including the works by Peles Empire, Mika Rottenberg, and Hito Steyerl—is possibly the most proletarian, the most intentionally humorous, and surely the most camp of them all. Bárbara Wagner and Benjamin de Burca’s Bye Bye Deutschland! Eine Lebensmelodie (Bye Bye Germany! A Melody of Life) is a video work exploring the culture surrounding Schlager, a popular genre that amounts to more than just “hit songs.” In Germany, Schlager is an integral sing-along backdrop to normative German life, typically invested in the reproduction of the institutions of gender, the family, marriage, and “the people.” In essence, it’s “the people’s music,” and for that reason it is often overlooked or simply ignored by the cultural elite. Presented inside the dimly lit and comfortably kitsch Elephant Lounge club in Münster’s old town, the video resonates so deeply with its context that it becomes impossible to imagine screening it anywhere else. Following the lives of Münster locals Markus Sparfeldt and Steffi Teumner, both voice-doubles for famous Schlager performers, the video slips and slides from scenes of mundane daily routine dominated by family life into vibrant and immersive moments of fantasy in song.

With humor, humility, and a pinch of voyeurism, the protagonists tell their story in distinct yet interdependent ways. On one side, they bring viewers into their lives through direct public observation (e.g. shots of Teumner walking around Münster with a baby carriage; footage from a drone camera landing in Sparfeldt’s hand while seated at a park bench). On the other, they recreate their dreams and express their desires in a powerfully cinematic, musical form. Wagner and de Burca’s work at once breaks down the barriers between public and private, low and high culture, and ironically reinforces them through the codification of “real” and “fantasy” spaces. In this way, it resembles life more than any other work this year.