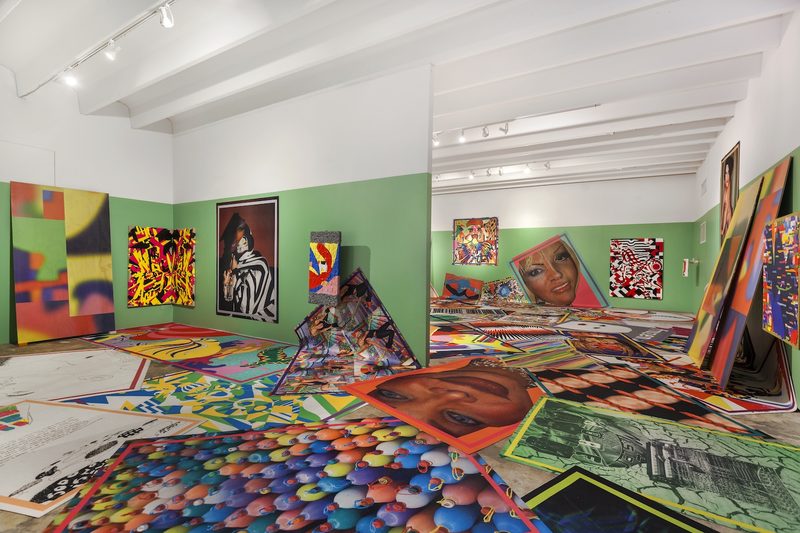 Eli Sudbrack isn’t your typical art world denizen. One half of the collective assume vivid astro focus (or AVAF for short), the Brazilian-born Sudbrack currently splits his time between New York and his adopted hometown of São Paulo, where he crafts work at the intersection of pop culture, queer, and net aesthetics, all with an anti-establishment sensibility.

Art world punk rockers, assume vivid astro focus have collaborated with the likes of Lady Gaga and Rei Kawakubo of Comme des Garçons, while at the same time producing sight-specific installations all over the world. A diverse cross-section of their highly colourful, subversive work is now the subject of a “re-transpective” titled avalanches volcanoes asteroids floods, originally commissioned for an exhibition at the Museum of Contemporary Art Santa Barbra and currently on view at Fredric Snitzer Gallery, in Miami. 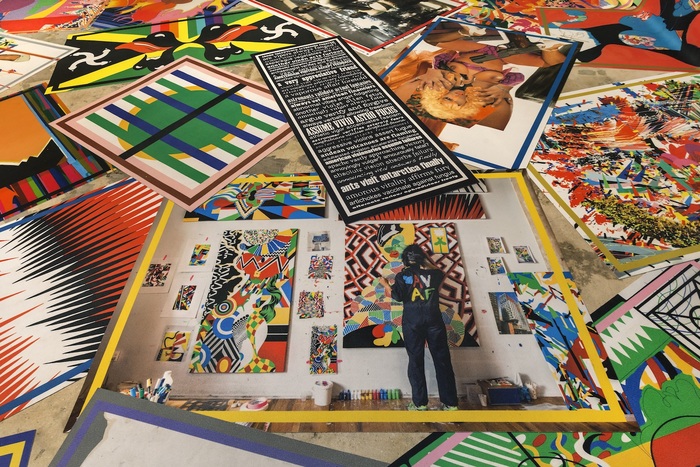 Turning convention on its head Sudbrack forwent the traditional retrospective model, opting instead to appropriate images from AVAF’s decade-and-a-half history. The duo work as a collective and have never collaborated with a curator on their projects. For avalanches volcanoes asteroids floods, the artists edited and printed images of their work onto carpets which they layered throughout the exhibition along with paintings, prints, and never-before-seen video pieces that survey the collective’s tongue-in-cheek oeuvre.

“We hardly ever save anything from our installations; it all goes to the trash,” joked Sudbrack. “For us it’s always about having a dialogue with the space, so our approach is different every time we do an installation. It’s not really interesting to just reproduce work without its context.”

“Trashing” their installations is not so much an anti-capitalist statement, as a restructuring of art as a happening rather than as object. Though collectors and museums have purchased various AVAF installations throughout the years, the physical remnants of past work become a fait accompli. It’s only by activation that the objects become imbued with the artistic zeal AVAF intend. 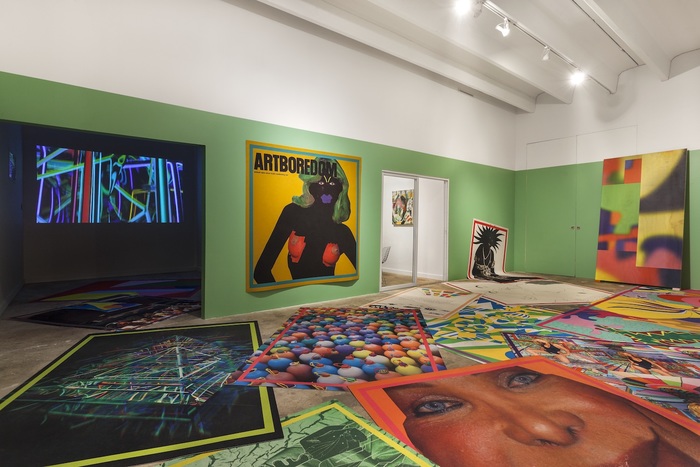 Sudbrack founded the collective in 2001 and was later joined by his partner Christophe Hamaide-Pierson in 2005. Their irreverent and colorful work takes an unabashedly critical look at gender and its socio-political implications, often with an exuberant élan that dares to questions the limits of free speech itself. At first they started by appropriating images from advertising, pop culture, and other artists’ work, transforming them first into psychedelic collages, and then original, abstract prints. It’s an evolution that mirrors the implications of evolving technologies and image economies within an art context.

“With the internet it’s so easy to appropriate images, that it’s almost pointless to try,” explained Sudbrack. “We’ve sort of evolved from appropriating other images to appropriating our own, which is partly why we’re calling this is a ‘re-transpective.’” 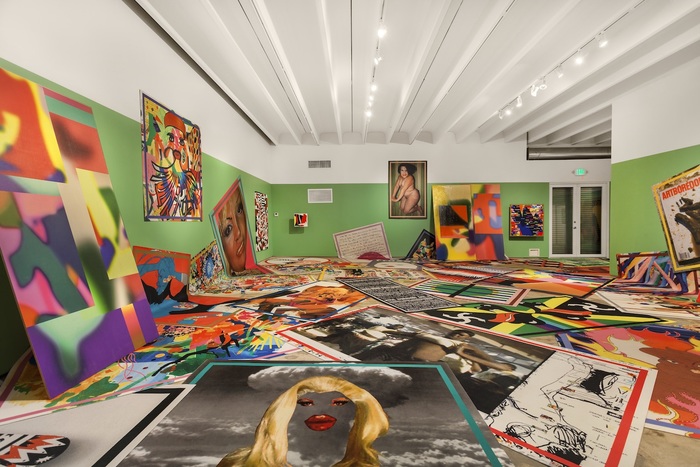 Apart from the transposing their own work for the current show, avalanches volcanoes asteroids floods was curated with a special focus on the socio-political struggle of trans women. AVAF’s work has always lent a transgressive view of traditional gender codes, but the current exhibition borrows heavily from various de-contextualized representations of trans bodies in a slew of media. Mixing images of trans women from pop culture as well as their own images, the works serve as a celebration of figures underrepresented in the art world. The end goal is not just increased visibility in art, but to highlight the harsh and often violent existence these women face in their everyday lives.

AVAF started exploring the transbody with geometric motifs in 2013, when they exhibited work in São Paulo featuring images of local trans women mixed with their bright, abstract prints. By appropriating their own images of trans women, especially those from Sudbrack’s hometown, the duo pivoted back to a deeply personal reference in their work. During the summer of 2016, as they were going through their archives selecting work for the current show, the Pulse nightclub shooting inspired to artist to highlight those themes in the “re-transpective.”

Yet, don’t let the show’s serious political bent fool you. Despite Sudbrack’s preoccupation the struggle of trans women across the globe there are plenty of pieces in the current show that speak to the collective’s irreverent sensibilities and refreshing disregard for art world conventions. 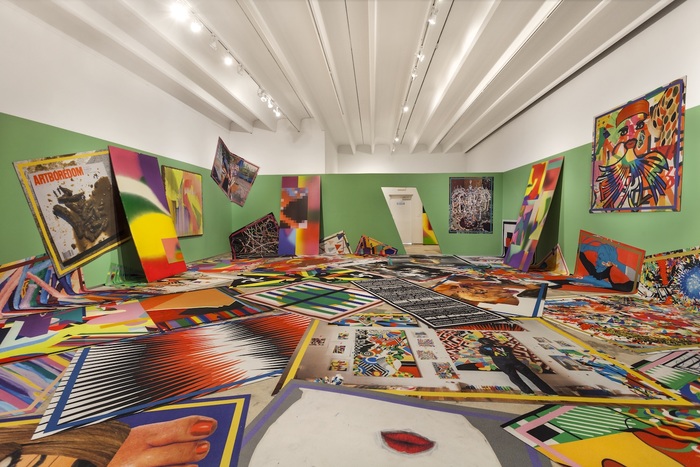 Take Artboredom (Shitty) (2008)—reproduced for the current exhibit—where the pair responded to a less than flattering Artforum review of a 2007 New York installation that took on the waning Bush administration. Instead of reacting with bluster, they made a fake Artboredom publication, and put crap on the cover. “I just thought it was a shit review,” explained Sudbrack. “They were just lazy, they didn’t even talk to me.”

The current exhibition is just the start of AVAF’s Miami footprint. Their work has also been commissioned for a special installation at Faena Forum on Miami Beach. The brand-new home of Faena Art, a non-profit that aides and highlights work of international artists, founded by Argentinian hotelier Alan Faena and his wife Ximena Caminos. AVAF’s collages will be featured on the floor of an indoor roller skating rink in the forum. The activation of the space is part of Faena Art’s Sunday Sessions, a special series programmed throughout Miami’s blistering summer months, housed at their new Forum building.

While the elaborate trappings of a retrospective have always been the hallmarks of art world success, it’s clear AVAF couldn’t be less interested in a coronation. For Sudbrack and Hamaide-Pierson, their work—new, old, or a transposition of both—always serves to point out hypocrisies, excoriate power structures, and raise more than a few eyebrows, hopefully all at the same time.

Under the Radar: Khanh H. Le | Zun Ei Phyu | Christy Titus
12/14/18
COMMENTS (0)
ArtSlant has shutdown. The website is currently running in a view-only mode to allow archiving of the content.