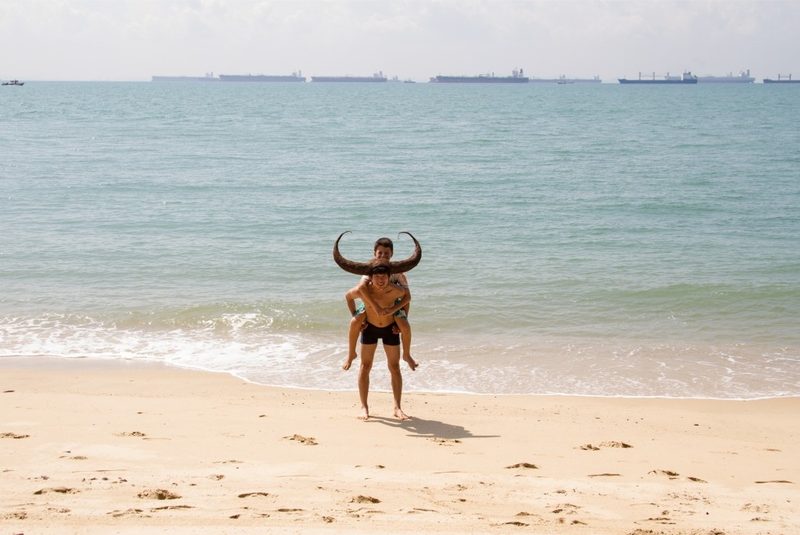 Riding through downtown Phnom Penh in a tuk tuk on my way to Sa Sa Bassac—the leading contemporary art gallery in Cambodia—I saw about 100 people marching in the street, holding signs and chanting slogans while flanked by cops on every side. I asked my guide what it was all about. She told me they were protesting land grabs by developers, who employ arsonists to burn down shanty towns to make way for apartment towers, which often then sit vacant, serving as investments to hide dirty money.

Upon my arrival at Sa Sa Bassac I met with the artist Than Sok to learn about his drawings and art installations, which are strikingly contemporary yet firmly rooted within a traditional Cambodian cultural milieu. His recent works dwell on the dynamics of Buddhist monk-hood and gift-giving, but I was particularly moved by his first major installation, titled Negligence Leads to Loss; Attention Preserves. Staged at the Singapore Art Museum in 2009, it consisted of a projector ensconced within a traditional cambodian spirit house. The video depicted a small spirit house built entirely out of incense, which the artist sets aflame. 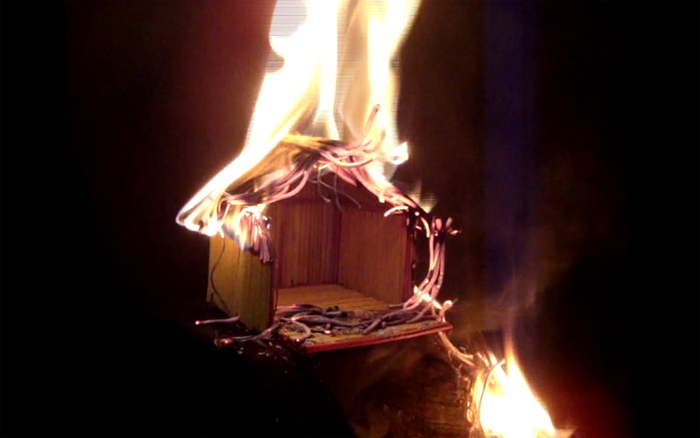 Spirit houses are a phenomenon peculiar to Theravada Buddhism (the variety of Buddhism practiced in Thailand, Laos, and Cambodia). Almost every household in those countries keeps a doll-sized spirit house outside, at which they make offerings of food, drinks, and incense, lest the hungry ghosts that wander the streets at night come inside and haunt their actual house. Spirit houses are typically made out of wood, and ornately decorated to attract the spirits. By constructing a rickety little house of incense and burning it, Than Sok was referencing the plight of those urban shanty towns that continue to fall victim to arson. Police and government officials look the other way, leaving their former residents homeless like the wandering ghosts for whom the spirit houses are built.

Stories of corruption like this abound in Cambodia. The tiny Southeast Asian nation is yet to fully recover from the devastating genocide enacted by the Khmer Rouge Maoist regime in the late 70s and the ensuing civil war which racked the country for over a decade. While the young populace processes the traumas of their parents’ generation, they also have their own challenges to face, ranging from basic poverty, to child sex trafficking, to the rampant expropriation of natural resources by Cambodia’s more powerful neighbors.

The matter of resource exploitation is addressed in the work of the artist Yim Maline, whom I met at her home in Siem Riep. One of the largest cities in the country after the capital, Siem Riep is home to Angkor Wat, the ancient seat of the Khmer empire, a UNESCO World Heritage Site which provides Cambodia with a precious source of tourism revenue (although, ironically, much of that money goes to the Vietnamese management company that runs the park, indicative of the lingering effects of the Vietnamese invasion that toppled the Khmer Rouge during the 80s).

Yim Maline was born in 1982 in the city of Battambang, and her early artworks used a surrealist drawing style to deal obliquely with her childhood memories of growing up during the war. In recent years, however, she has shifted her approach to making sculptural installations and abstract drawings with environmental degradation as her primary subject. For instance, her most recent show at Sa Sa Bassac, which closed in January, was titled Decomposition, and consisted of abstract drawings on cardboard which were laid flat on the floor. 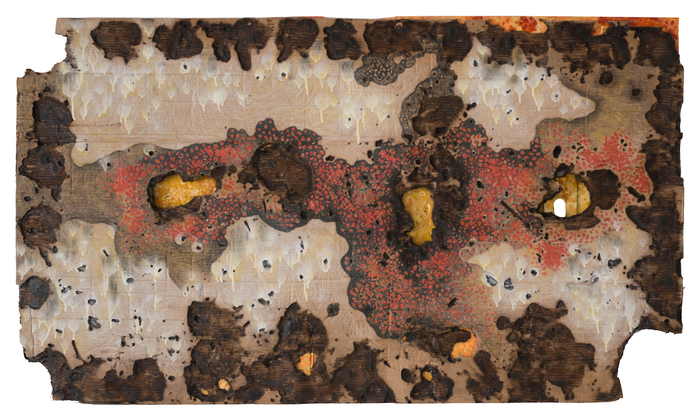 Richly textured with holes carved or burnt into their surface, the works possess a topographical quality with their exposed layers of cardboard substrate. By burning and digging into the cardboard to create negative space, Maline’s Decomposition series references the various ways in which the Cambodian landscape is being eviscerated, not only by Chinese mining and logging conglomerates who use bribery to operate within protected areas, but also by locals who set fire to public forests in order to collect charcoal for a living. Maline explained that the dug out sections also relate to the illegal sand dredging taking place in Cambodia’s waterways.

Sand dredging is on everyone’s mind in Cambodia these days, following a recent Court of Appeals decision to uphold an enormous fine for three prominent activists from the Mother Nature organization, who were temporarily imprisoned for climbing onboard a sand dredging barge in a 2015 protest. Despite the existence of laws forbidding the dredging (which is causing widespread coastal and riverside erosion and decimating the livelihoods of countless fishing communities), the courts have consistently sided with the predominantly Vietnamese companies that nevertheless continue to do it. Vietnam implemented a ban on the dredging of its own rivers and beaches a few years ago, but there too, companies with ties to high-ranking communist officials still get permission to dredge. The profits to be made by exporting sand to Singapore to build reclaimed land and artificial beaches are too massive to resist.

Another artist making work related to dredging is Khvay Samnang. Back in Phnom Penh, I met with Samnang at the gallery/restaurant Java Cafe, where he filled me in on his video and performance art practice. He addressed the sand issue in a very literal way in his video/performance Enjoy My Sand (2013–2015). He went to beaches in Singapore and, donning water buffalo horns upon his head, invited Singaporeans to go for buffalo rides on his back. While playful on the surface, the performance also served as a means of broaching this serious topic with Singaporeans who may not have known where their nice new beaches were coming from.

While the conceptual impetus behind Enjoy My Sand is certainly strong, the delivery was quite blunt and the aesthetic dimensions of the performance a bit thin. Far more subtle and emotionally moving is Samnang’s 2014 multi-channel video Where Is My Land, in which the artist collaborated with dancer and choreographer Nget Rady. Shot alongside riverbanks, in construction zones, and on the shores of a Phnom Penh lake which has since been filled with sand to make way for development, Rady can be seen engaging with his environment in a wistful, improvisational manner.

Khvay Samnang, Where Is My Land, 2014, Video stills. Courtesy of the artists and Sa Sa Bassac

Explaining the inspiration for this project, Samnang recounted a story he had heard about a family whose house collapsed into the river as a result of dredging-caused erosion. The collapse killed all three generations sleeping inside. Personifying one of these drowned souls, Rady is imagined to have drifted downriver for days, his body sucked into a drain pipe, eventually emerging at the site of the swiftly disappearing lake. He awakes lost and confused, a wandering ghost who no longer knows where his home is.

The ability for either activism or artists’ projects to provoke meaningful change in Cambodia remains yet to be seen. Prime Minister Hun Sen has held a firm grip on power since 1985 (making him one of the longest running heads of state in the world), and with his family members holding monopolies over all the major industries in the country and his son poised to replace him after his demise, the prospects for internal political restructuring are looking pretty grim.

Nevertheless, environmental and social issues have become a common theme in contemporary Cambodian art, and for good reason, as it must be incredibly frustrating to witness widespread injustice taking place in one’s country while knowing that one has no legal recourse to stop it. Short of risking one’s life and livelihood by engaging in direct activism, using art to shed light on such issues makes for a pretty good alternative (and given the inability of direct activism and artists projects to prevent the construction of the Dakota Access Pipeline, we should acknowledge that the situation in America is not all that different).

However, given the fact that all of these artists exhibit internationally as well as in Cambodia, they are uniquely positioned to draw attention to these problems on the world stage. Perhaps if pressure is leveraged on the Hun Sen government from abroad, some of the damage can be alleviated before Cambodia’s next generation wakes up wondering where their land has gone.

Dave Willis is a curator and art advisor from New York, currently based in Chiang Mai, Thailand. He is the founder of Willis Art Advisory, an international firm specializing in contemporary art.