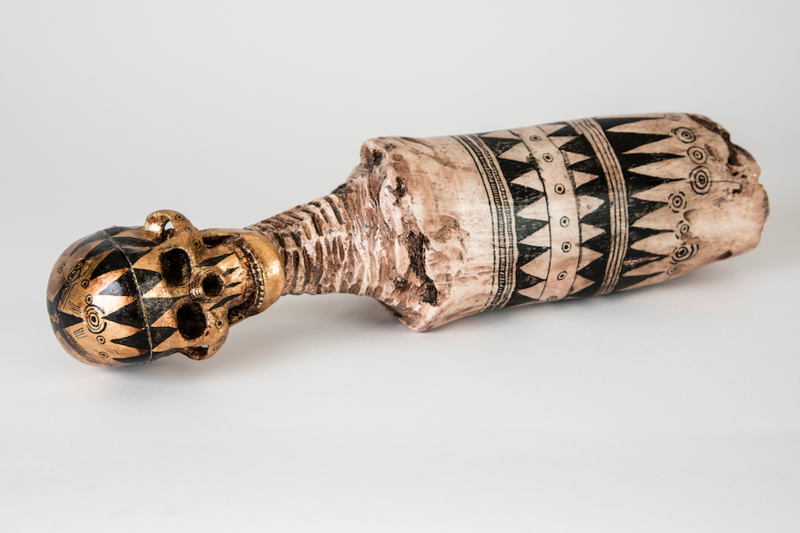 If Freud had chosen another profession, he might have become an archaeologist. After all, the mythology of personality has its roots in childhood. Memory is a retroactive alloy, and introspection can sometimes muddy our grasp on the past. Too much nostalgia transforms our beloved childhood mementos (favorite toys, teddy bears, and such) into prescient talismans of the future, justifying our adult delights and detestations. Too much nostalgia and we long for a promised time when America used to be “great,” forgetting it wasn’t so great for everyone. We create and edit our own histories accordingly—objects of our past are retconned to suit our reality. Fiction becomes reality.

Joshua Goode’s newest exhibition, Origin of Myth at Ivy Brown Gallery, is a clever satire on the ability of childhood ephemera to reshape our pasts—and perhaps, in turn, our understanding of the present. Further, it’s a suitable art analogue to the oddly postmodern political debates surrounding truth and “alternative facts.” Learning about the tools of fiction, or how fiction underscores and replaces the truth, can be read as an important lesson for the Trumpian world. 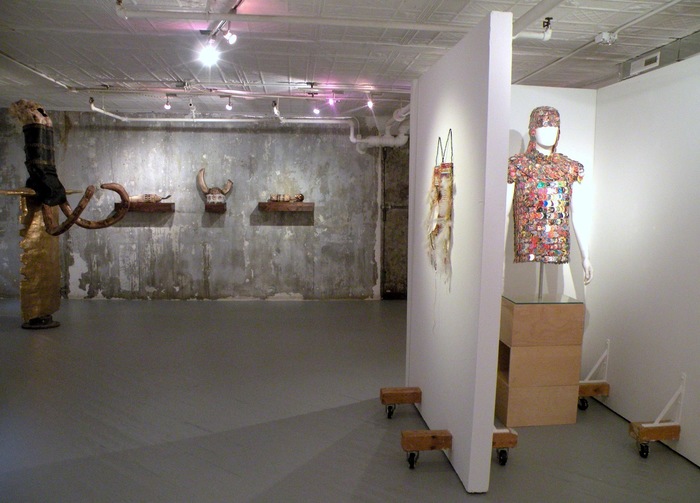 Adopting the guise of an amateur archaeologist, Goode “excavates” his past, animating his simple Texan origins with an alternate history and mythology. He retrofits the objects and images of his childhood into ancient objects, weaponry, and remains from a bygone era that never existed. Trading cards and POG bottle caps become suites of armor; seemingly ancient tusks carry pop cultural references to cartoons like The Simpsons.

And through his faux research institute, The Aurora-Rhoman Institute of Archaeology and Cultural Relics, Goode elaborates on his hoaxes with the fallacy of institutional accreditation. If an organization deems his findings legitimate, who’s to say they aren’t? In reality, Goode’s institute is an ode to the many deceptions knowingly and unknowingly committed by other amateur archaeologists who presented forgeries as facts. How are we supposed to trust our most prestigious institutions when they too are susceptible to forgeries? (For example, both the Getty Museum and the Metropolitan Museum of Art were famously fooled by Greco-Roman forgeries, which were displayed in their galleries among real artifacts for years.) Who are we to trust if not the professionals? 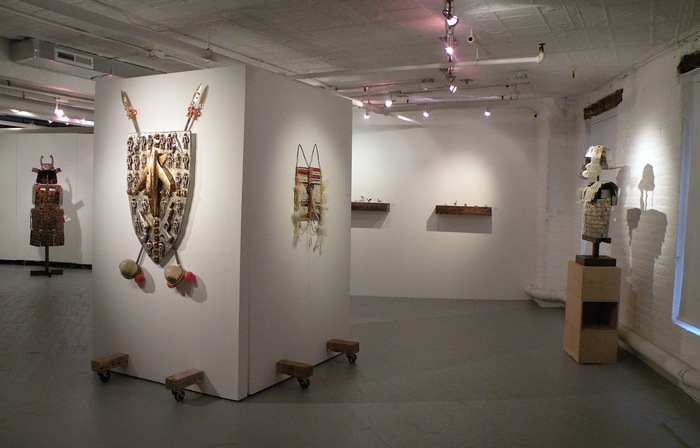 Accordingly, Goode funnels the virtues of craft and professionality into his work, paradoxically announcing himself as a great, bad forger. What catches the viewer’s eye here is not the authenticity of Goode’s artifacts, but its vagueness, its truthiness. (Similarly, Trump and his administration hardly try to hide their falsehoods. But when they do, they use vague language and untruths to sweeten their bitter insincerity.) We want to believe in the veracity of Goode’s forgeries because of the care he invests in them. Even animal parts created with plaster look real. But as soon as you start believing that some part of this exhibition is true, Goode hits you over the head with fiction. That impressively large mammoth tusk? Unbelievable once you notice the MTV Moon Men have been carved into its ivory.

Elsewhere, Goode downplays craft to comment on how collecting culture is a defensive impulse. To fabricate Donrus 88 Samurai Armor, Goode ties his baseball trading cards together with sinew and coats their surfaces with a light oil paint, which creates a shiny, metallic effect. Visually, he obscures the faces on his trading cards with paint, reconstituting them as eerie ghosts on a suit of armor meant to ward off foes. Thus, the solaces of a childhood collection calcify as literal defenses against the real world. 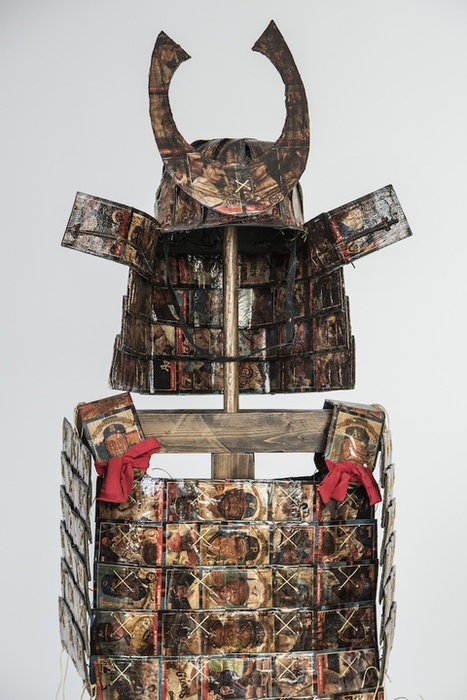 More lightheartedly, Goode has also developed a series of crude little monsters composed of melded toys. Dotting the gallery shelves we see the iconography of Goode’s new mythology: elephant-giraffes, shark-pterodactyls, and gorilla-horses renamed as long-legged mammoths, sharkysauruses, and three-assed centaurs, respectively. There is something wonderfully boyish about this section of Goode’s work. As he creates and collects mythology, we are reminded of our own impulses to believe in spectacle, simply because it captures our eye.

Zachary Small is a New York-based genderqueer writer. He’s written for many publications including Hyperallergic, BOMB Magazine, Artinfo Magazine, and HowlRound. He was recently named the 2017 recipient of the CUE Foundation’s Young Art Critic Mentorship Program. His latest play, /VANITAS/ debuted at Dixon Place. He tweets from @ZSmall93 and can be reached at zsmall93[at]gmail[dot]com.