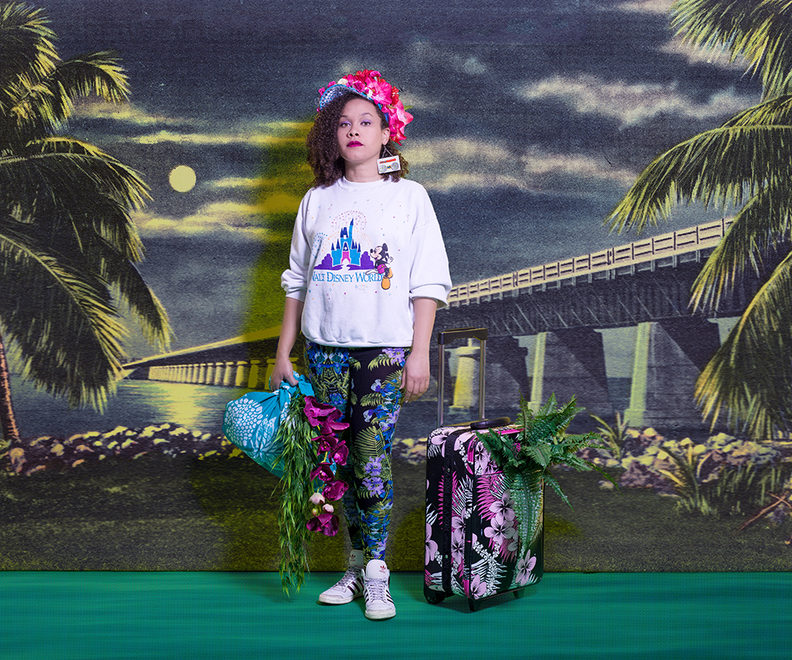 When Tiffany Smith enters a home, she looks at every item, searching for clues to reveal identity and personal history. She combs the space for intimate hints that work together to tell a story.

Raised between Nassau, Bahamas, and Miami, Florida, by her Caribbean parents, Smith has put her faith in photography, using the camera to confront stereotypes about Caribbean culture and identity formation. While earning her BA in photography at the Savannah School of Art and Design, Smith would spend 4–5 hours working on one image, becoming lost in her process; procedure turned to ritual. This same process taught Smith to understand the magic of letting go, of waiting for the unpredictable moment to occur—the moment when the portrait is truly made. Foraging for hints of cultural identity had its limitations. Instead, she waited for the clues to surface to the top, learning to trust they would appear naturally in her subject’s pose. Smith says, “The image doesn’t come together until the person lets their guard down. That’s when you know it’s the shot. You can’t control that moment.”

Each of Smith’s portraits is a carefully crafted story that weaves together truth and myth, the here and the there, the foreigner and the native inhabiting the same self. Her current photo series, A Woman, Phenomenally, has been slow to develop, a measured and gradual simmer involving hours of intimate conversation with her subjects coupled with intense research about their homelands and histories. 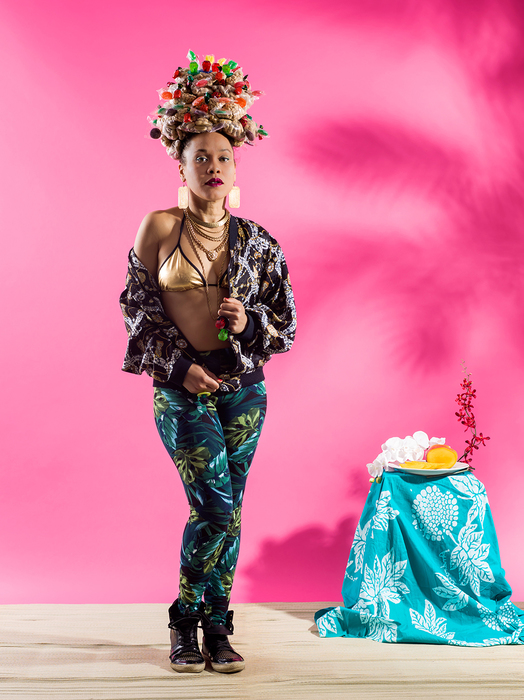 Tiffany Smith, Study 6 from the series For Tropical Girls Who Have Considered Ethnogenesis When the Native Sun is Remote, 2014. Courtesy of the artist

Her portraits started as a conversation with close friends sharing the similarities of their island-life childhoods and celebrating the differences of their cultures. Smith isn’t looking for performers in her work. Instead, she provides us with gestures and guides that all point to the subjects’ cultural realities, rather than the falsity of performance. The artist wants to build on the rhythm of her subjects’ overlapping experiences. The work becomes about the way women of color experience each other’s sameness and uniqueness. What comes through most triumphantly is how these women are bonded through oppression and mutual misrepresentation.

Before she began taking photographs of other women, Smith’s first ethnographic study was focused on investigating her own narrative. Making self-portraits was a growth process that helped her to empathize with the position of the subject. “I needed to know what I wanted to bring out of the other women,” she explains. The artist explored turn-of-the-century portraiture of women of color and homed in on the exoticized gaze, asking herself, Who is looking at these women? Why are they taking these photos? How much power do these women have over how they are being depicted? It is through these questions that Smith begins to investigate the idea of the non-native self. Her first images in this research are studies, points of discovery imparted with her own memory of growing up between worlds.

Creating the portraits in A Woman, Phenomenally, Smith focused on the construction of identity, returning to the idea of having agency in assembling the way we are seen, authoring our own narratives. Visual propping and symbolism are critical devices of communication laced between the portraits. The props, including bright blue, hand-made paper boats, wooden Filipino kitchenware, and African headdresses stacked to form a crown, are not only objects developed from her conversations with these women, but opportunities to draw direct, trustworthy routes to the sitter’s culture for the witness. As the series develops, the way the photos are shown together is also transformed. A portrait of a woman veiled in white lace becomes a resting image tucked in between the tropical forest of bright greens, purples, and pinks, a quiet moment and necessary breath in the series. 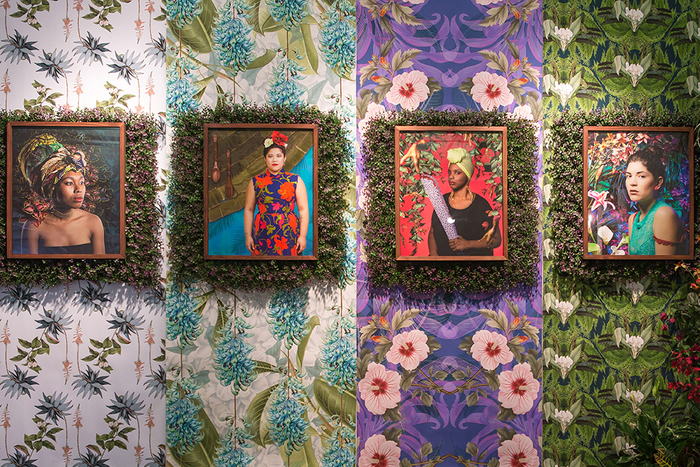 During graduate school at the School of Visual Arts, Smith started experimenting with installations, her way of stretching the portraits into experiences. Organizing the portraits into installations was a way to demarcate space, to force the viewer into a curated experience using markers that operate both as authentic cultural symbols for the subject and as stereotypes of an island lifestyle being applied from the outside(r). Smith uses these props to lure viewers into a more melodramatic moment with the subject, but also as stand-in cultural references to actual Caribbean life. The wallpaper backgrounds are created with colorful, botanical illustrations of plants that are native to the same places the subjects are from. Her use of artificial tropical plants produces a distancing exoticism she wants her viewer to grapple with, heightened by the apparent tension between impression and reality. Smith is challenging stereotypes and exotified depictions of the women in her photographs, blurring the line between what is factual and what is artificial.

In her series, From Foreign, the artist confronts stereotypes about Jamaican life and culture, searching for connections to herself and revealing the many ways cultural identity can be formed. Creating candid photographs of her family in Jamaica, Smith constructs a figurative pathway into a typical Caribbean home, featuring concrete block patterns, curtains the colors of the Jamaican flag, and a white, wire dish filled with tropical fruits. The photographs are a push-and-pull, offering a glimpse into Smith’s experience as both a native and a foreigner in this place, or, as she has often called herself, “the perpetual tourist.”

They are also her tools to tell the story of an individual, much like herself, who feels foreign in their home. Four of the photos in From Foreign feature some sort of a veil/curtain, highlighting the way one shifts in different locations and circumstances. Smith draws attention to a portal that can push you out or pull you into a cultural identity or place. These veils allow the artist to explore what it means to have a fluid sense of home and how an individual can form an identity within that fluidity. They encourage us to ask: “Where is home?”

(Image at top: Tiffany Smith, Perpetual Tourist from the series For Tropical Girls Who Have Considered Ethnogenesis When the Native Sun is Remote, 2015. Courtesy of the artist)