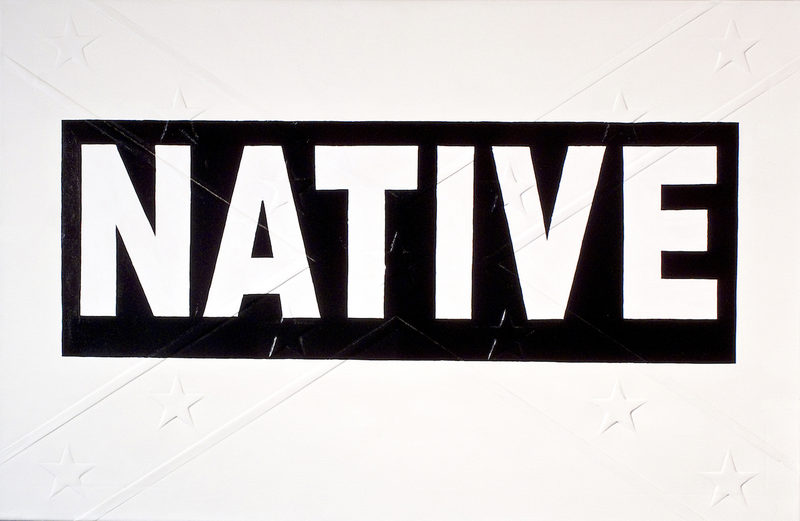 ArtSlant will be exhibiting the ArtSlant Prize 2016 Winners at SPRING/BREAK. In expectation of this uniquely site-specific, curatorial fair, we’re featuring interviews with participating curators and artists, asking them what they see reflected in the black mirror.

Michael Holman doesn’t shy away from making big, off-the-cuff proclamations about the meaning of life and art. “Art is the engine that propels evolution,” he told me in a recent conversation. A creative polymath, Holman gesticulates as he speaks, occasionally breaking into song: ticka ticka ticka ticka timing, cha cha cha, a few steps forward, a few steps back. He peppers his pronunciations with cinematic metaphors, pulling from horror, sci-fi, and drama.

It’s not surprising that Holman samples intuitively from diverse genres and art forms. A vanguard of the Downtown New York art scene from the 80s, he is the accomplished wearer of many hats: from his experimental band with Jean-Michel Basquiat, to his journalism (he’s credited as the first person to use the word “hip hop” in print), to his screenwriting, filmmaking, and television production. His hip hop archives were acquired by the New York Public Library for Performing Arts last fall.

Throughout all these endeavors, Holman has been making art. And this month, his decades-long series of paintings, Native, is ready for its close-up. Since the early 90s, Holman has been deconstructing the Confederate flag, forcing a conversation about ownership, identity, symbols, and the complexity of meaning. “Trump allowed this to happen,” he says a bit incredulously, reflecting on the turns that have gotten him to his upcoming show.

Organized in partnership with SPRING/BREAK founders Ambre Kelly and Andrew Gori, Holman will exhibit works from Native at SPRING/BREAK Art Show during Armory Week. Holman’s clear excitement for this moment is tinged with irony. “Out of this anger,” he says, “out of this insane conversation where we’re talking past ourselves, out of this bubbling cauldron, comes my flags. It’s me proud of who I am as a Black man, but also embracing my history.”

Holman spoke with me about the currency of symbols, his embrace of the Confederate flag, and the white privilege reflected in the black mirror. 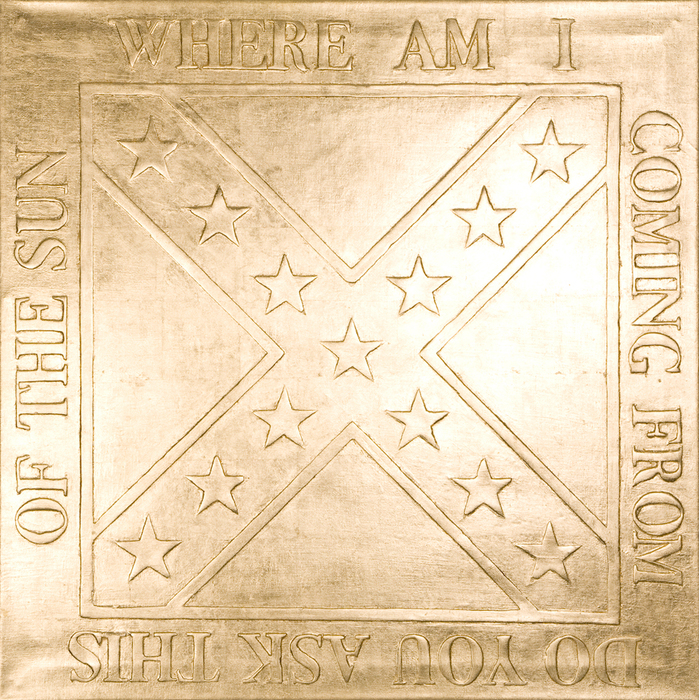 Andrea Alessi: How do you feel about your work being shown at SPRING/BREAK in this specific cultural moment?

Michael Holman: After Trump was elected, I felt a marked urgency and a sense of inclusion for my work in this show. As Trump continues polarizing the country and alienating people, baiting them against each other, let’s face it, my work is perfect to speak to this idea: I’m a Black man deconstructing the Confederate flag with ancestors who fought in the Civil War on the South side.

MH: My approach has never been some kind of attack on the Confederate flag. I want to ask the question: Are symbols innocent? When does a symbol have to be responsible for the actions that people do in or under its name?

AA: So, are symbols innocent?

MH: I don’t think I have an answer for that. I could take $5 worth of paint and $10 worth of canvas and paint a swastika or Confederate flag and it’s still just $5 worth of paint. Does the material that made that object also carry the burden or the hatred or the political point of view ascribed to that symbol?

Some bigots have chosen to use that flag as a weapon to intimidate Black people, and Black people play right into it too—they’re like “yes, that’s the evil flag.” I’ve chosen to take a different tack: My attitude is: “Fuck you. I own that flag as much as you, and maybe more. I’ve got documentation, motherfucker.” I’ve got documentation that says that I’m a son of the Confederacy. 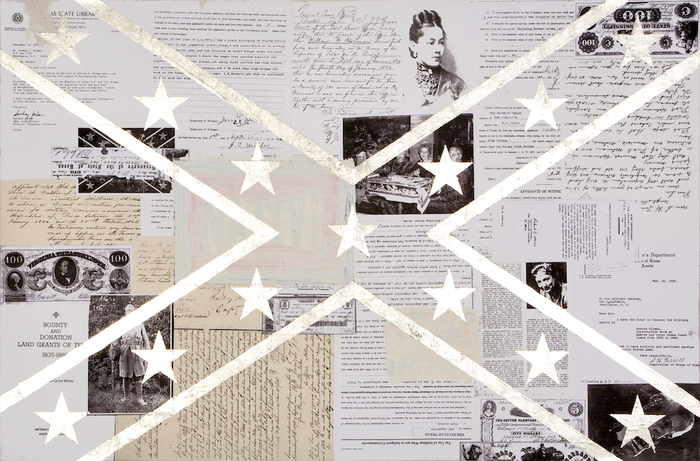 AA: Tell me about that.

MH: My father’s family comes from Texas and we have a long history there that’s mixed with Black and white, slavery and master. My father told me I had family, Black family, that fought in the Confederacy. They didn’t see much action—hardly anyone from Texas did—but they were nevertheless Confederate soldiers. I reached out to the archives in Austin and there were quite good records of my ancestors fighting. They knew they were Negroes, and this defeated army still upheld its obligations in terms of health and retirement benefits, widow compensation, etc. It was eye opening. I’ve used Xeroxed copies of some of these family records in my work.

But my point is: I own that flag. I refuse to let some white racist use that as a weapon against me, to threaten me, to intimidate me, to frighten me.

AA: This isn’t about “taking it back,” so much as saying “I never didn’t own this.”

MH: If you want to play that game of the power of symbolism and you want to use something as a weapon, you better know who else owns that weapon.

AA: How do you see the work relating to the theme of the Black Mirror?

MH: I see the black mirror in contrast to a clear mirror. The black mirror would be a reflective and shiny black surface, but it’s an inversion of what you’re reflecting back: whether it’s visual or philosophical or conceptual. It’s reflecting not reality as we understand it—which would be our clear mirror—but some parallel reality. Is it a corrupted reality, or is it a more accurate reality on some levels?

On a personal level, I’m seeing backwards. When I look into the mirror of my genetics I see my ancestors having fought in the Civil War for the South. I’m saying: “Let’s not question why they did it—they did it. When I look in that mirror, it’s there. The truth is there.” I’m looking at a dark side of my history and I’m owning it. 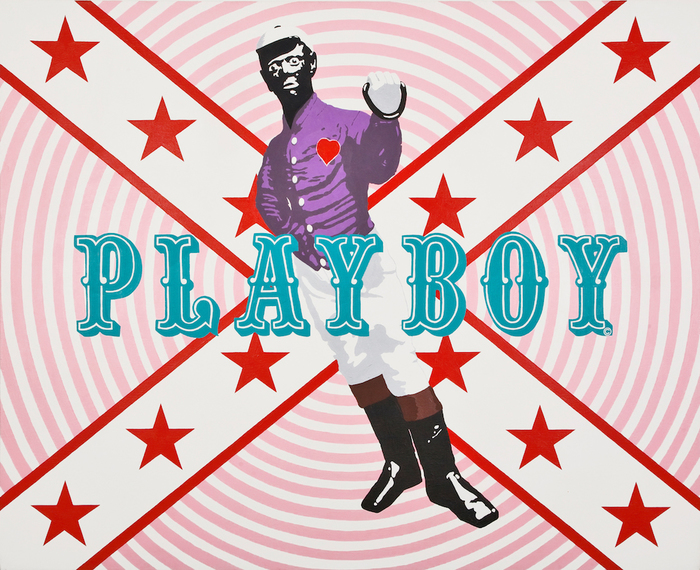 AA: Do you feel pride or shame?

MH: Shame doesn’t enter the equation. I feel a certain pride in the longevity of my ancestors in this country. We’ve been here since the beginning of slavery, probably for 300 or 400 years. That’s why I use that term “Native” for these artworks.

AA: Tell me about that title.

MH: Obviously it’s not “Native” in terms of Native American. It’s the native that many of the “first white Americans”—the English and the French—used against the Irish and Italians and Poles when they first came. These white colonists wrapped this name of nativism around themselves. It’s a term that would never be ascribed to Black people, but we were right there with them the whole time.

If you went back in time, it would blow your mind. It would be at once a lot worse and a lot more benign. 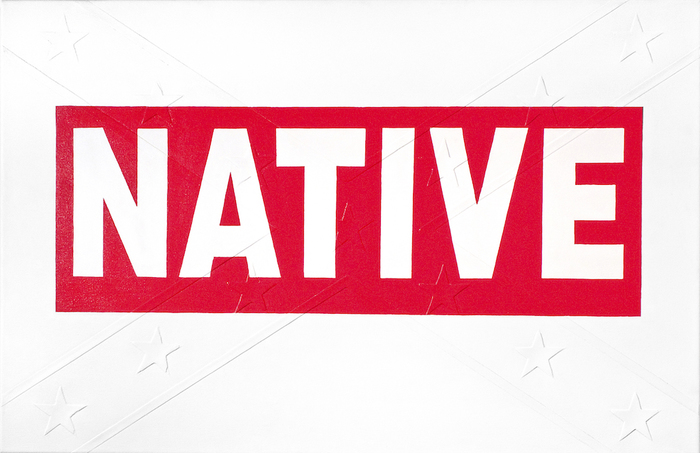 AA: Do you think about time travel a lot?

MH: All the time. We have to time travel. Historians are time travelers, evolutionists. I don’t think it’s as mysterious as science makes it out to be. The past is still with us. In our DNA. Time travel happens all around us and we see ghosts of the past and hints of the future. We’re time travelling in spite of ourselves.

Today, a lot of white people are starting to recognize the pervasive, systemic nature of racism in this country. Especially the millennials, they’re like, “yeah I get it now.” Because of media, because of iPhones. We’re seeing Black people being murdered by the police in a way that was happening all the time. In films like 13th we’re seeing the prison industrial complex in its most naked form. We’re seeing how all these things are just a continuation of slavery—that’s part of time travel. 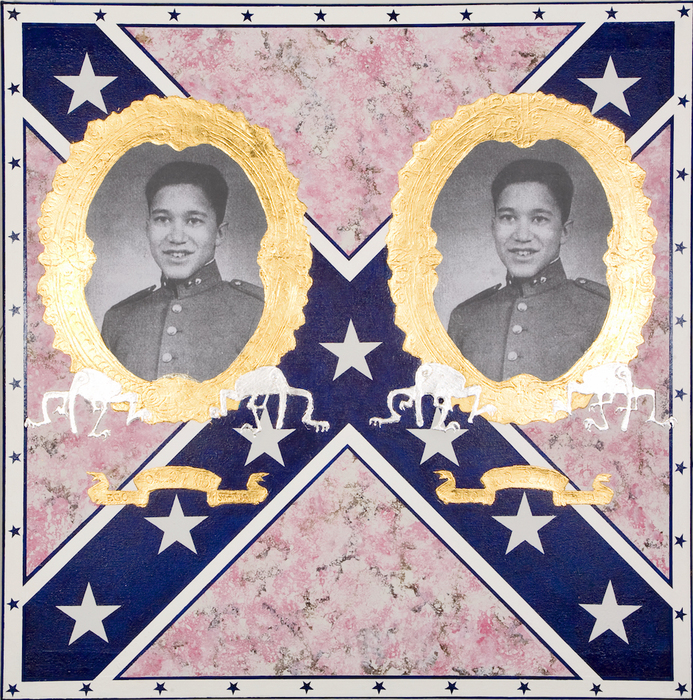 AA: Could another conception of the black mirror—our smartphone and television screens, like you’re saying—be that it’s revealing and reflecting white supremacy?

MH: Yes! Modern devices are so powerful for communicating ideas and sharing data. They’ve taken away the last vestiges hiding the existence of racism. iPhones are capturing these moments that are naked—episodes of blatant obvious police brutality. The blinders have been pulled back and now we’re looking into the black mirror of white privilege and racism.

AA: Part of the issue of white privilege is that people don’t want to own up to it. In the same way that you’re taking a very real, candid look at your history—could part of the solution be white people being equally candid with their histories and themselves?

I’m turning it upside down, and maybe if you turn your lens upside down, then maybe you’ll see your white privilege. 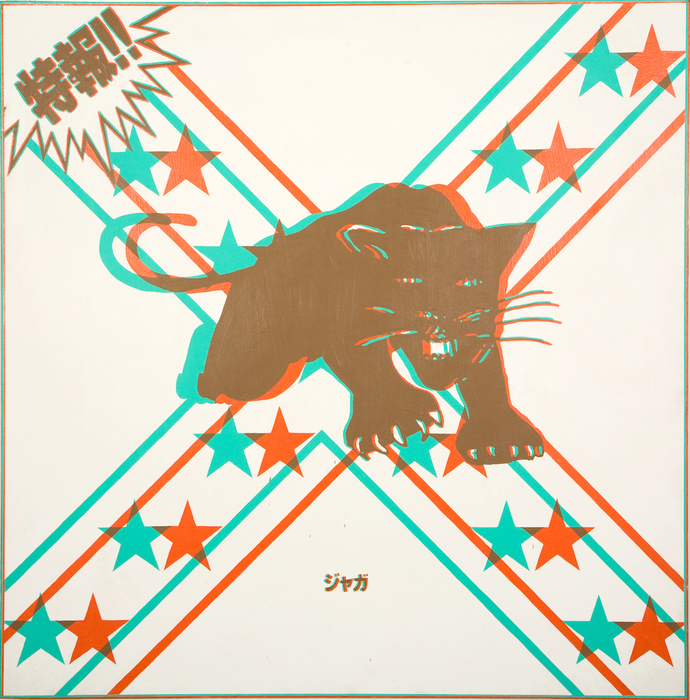 AA: Is it a difficult object to sell? Do people want to have these flags in their homes?

MH: I’ve had these internal conversations with myself: Am I crazy? Am I begging to not be collected? Is this self-sabotage? Do I know that this is going to be super challenging for people—even if they like the work—to want to own it, buy it, hang it on their walls? Yes. I know that’s all real. Does that stop me? Apparently not.

AA: Do people buy them?

MH: Yeah. They hang in people’s houses. What is art supposed to be? Should it sit over the couch and be non-offensive? My posse from the 80s, they would never have anything to do with art that was purely decorative. I believe that artists are the vanguard of evolution, the light that shines through the darkness of human confusion, through the self-destructive behavior that threatens our continual evolution and survival. Art’s job is hard; its job is to save us.

So, shouldn’t art be challenging in that respect? Shouldn’t collectors have the courage to hang a piece of art that might offend someone but is going to trigger debate and dialogue about what the art means, and symbols in general? Shouldn’t we be going there? 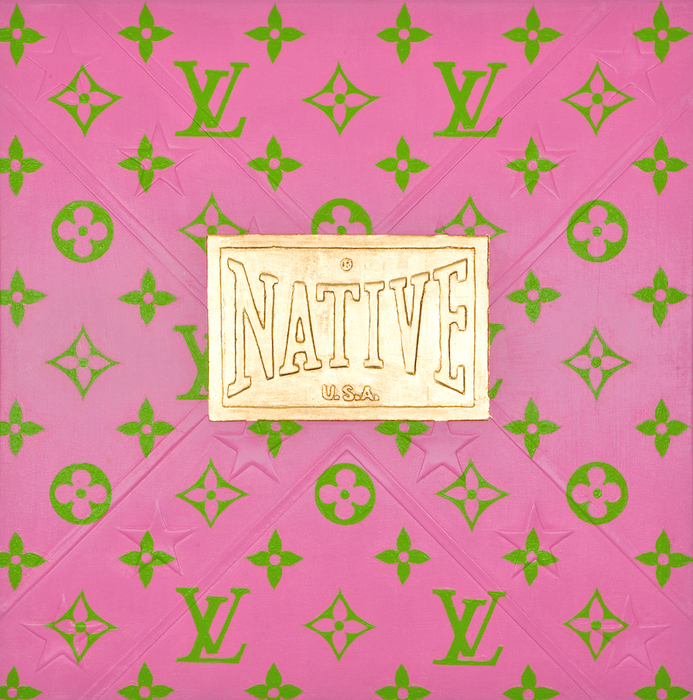 MH: I came from being a hip hop pioneer, helping bring it Downtown and to the rest of the world. I saw how hip hop kids were deconstructing these luxury brands and saying “I’m gonna wear this luxury brand and make it my own.” This one cat would print these logos himself and make these ghetto-fabulous clothes that Gucci or Louis Vuitton would never make. He was taking the cache of Louis Vuitton and deconstructing it for his own purposes.

AA: Do you consider yourself an appropriation artist?

MH: Like a sample artist? Yeah, I’m an appropriator. I’m not gonna ask for permission.

AA: Since November 9, my readings of artworks are so different than how I would have read them before the election—that’s inevitable. Your work really speaks to this moment. It becomes even more powerful.

MH: There have been times when I was afraid to do this work, because I was like, I’m going to look like an Uncle Tom, no one’s going to understand what I’m trying to say or do here, I’m wasting my time, what am I doing? But I’m just an evolutionist, exposing and clarifying the complexities of meaning. 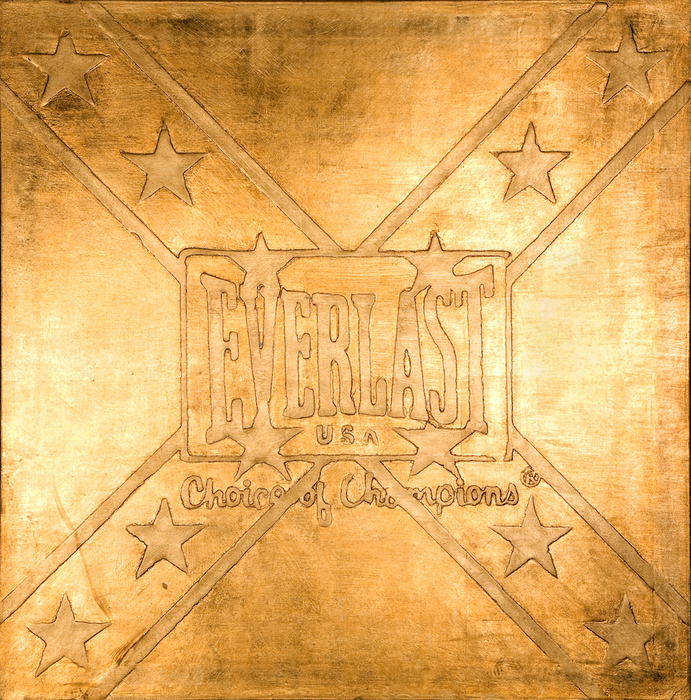 (Image at top: Michael Holman, Black Native, Acrylic on gesso on canvas, 46 x 30 inches. All images: Courtesy of the artist.)