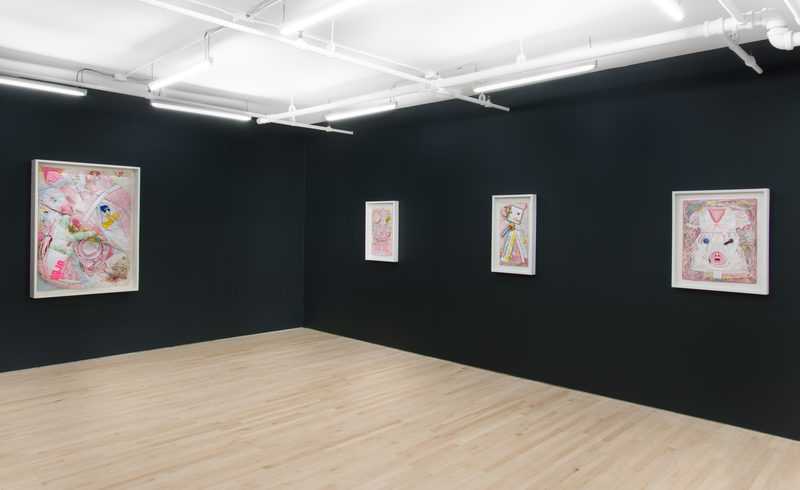 Crafting “Feminine Monsters,” Bonnie Lucas Takes on Growing Up as a Girl

by Olivia B. Murphy

On an overcast morning in January, I arrived in Washington D.C. wearing a ratty old t-shirt with the words “My Body My Choice” emblazoned across the breast, ready to march with hundreds of thousands of women, men, and children. It was a t-shirt handed down to me from my mother, who first wore it in 1989 at a Mobilize for Women’s Lives March, organized by NOW. Walking down Independence Avenue almost thirty years later, with scores of protesters brandishing signs and pins and protest t-shirts of their own, I felt a strange mix of pride and sadness: pride that so many of us were continuing the fight our mothers began, and sadness that is pretty much summed up in a sign that read, “I can’t believe I’m still protesting this fucking shit.”

About a week or two after the Women’s March on Washington, I went to see Bonnie Lucas’ show Young Lady, at JTT Gallery, curated by Marie Catalano. I was struck by both the intricacy of the craft, and the potency of its content. Again I felt a sense of prideful excitement tinged with sadness. Pride and excitement that this work, which is from roughly the same era as that My Body My Choice t-shirt, still feels fresh and important; and sadness that still, after thirty years, the discussion of women’s bodies, sexuality, and imaginations remains so fraught and regulated. 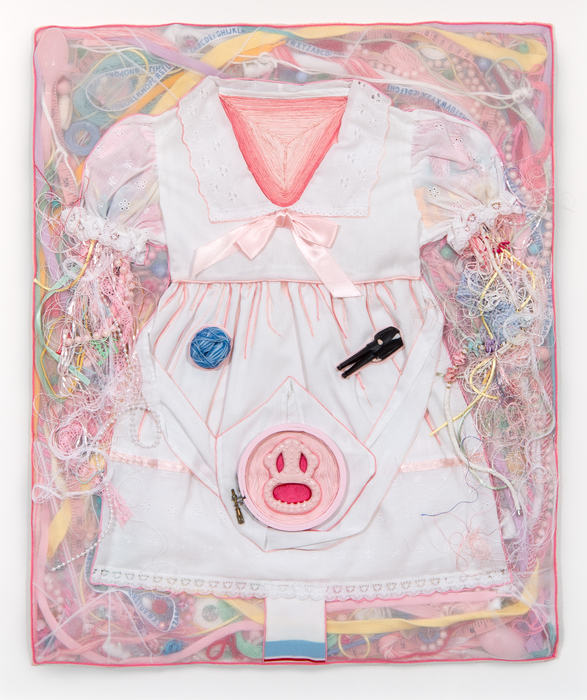 Much like the pink hats that flooded Women’s Marches all over the world on January 21, Lucas’ art is subversively and unapologetically feminine. Her high relief works look like quilted collages, or perhaps collaged quilts, utilizing materials like baby dolls, children’s dresses, craft yarn, beads, baby blankets, needles, underwear, and toys. These all fall into a palette ranging from Pepto Bismol to the palest blush, with a primary-colored pop every now and again. But the images that emerge from the deluge of layering and weaving and stitching and sewing reveal a deeper narrative infused with violence and sexuality—a narrative that dissects the abject underbelly of girlhood. 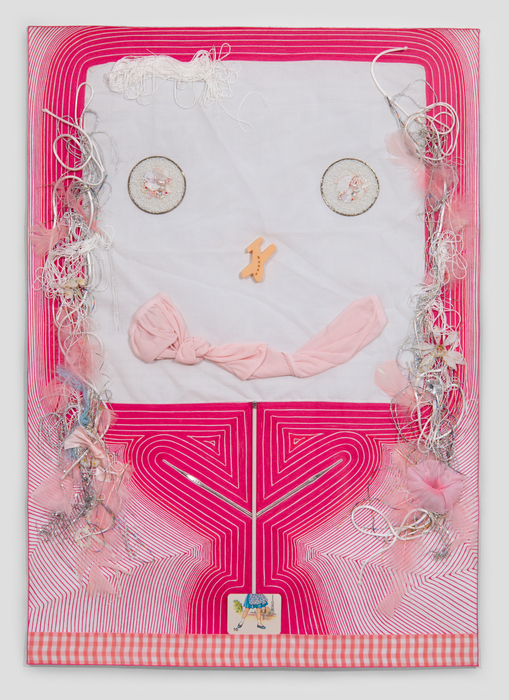 Penetration and secretion are themes not just in this work’s content, but within the craft itself: the poke of a needle, the spilling of beads. And it’s precisely this penetration, destruction, and recreation that brings a kind of satisfaction to Lucas. There is something almost sexual about “a tutu bent out of shape…violated by a symbol of femininity,” like a pin or pendant, as she says.

Lucas’ work is seeing a reemergence now, but for the majority of her career, the artist was not recognized as a part of the “Second Wave feminist” canon. The truth was that most card-carrying feminists wanted nothing to do with her intense association with what they saw as oppressive femininity. Even artists like Hannah Wilke and Cindy Sherman, who often skirted the line between objectification and agency, still did so under the serious aesthetic of black and white. Women artists from the ’60s through the ’80s categorically denied “pink” as an idea; pink was lipstick, high heels, homemaking, porn, and everything else that confined women to their cookie-cutter roles of caretaker or homewrecker, desexualized mother or sexual deviant. But rather than rejecting this “pink femininity,” Lucas wanted to understand why she was at once attracted and repelled by it. 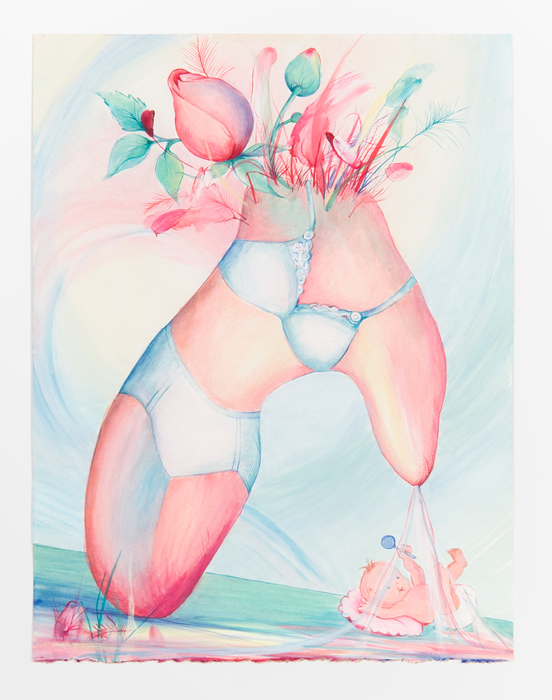 This question drove her decades-long investigation into how the materiality of femininity has been used as a tool of oppression. Moving to New York in 1979, after receiving her Master’s from Rutgers University, Lucas found a small studio apartment on the edge of Chinatown and SoHo, where she still lives and works to this day. I met her there, amidst her piles of “treasures” from Chinatown and the Fashion District, and artworks in various states of completion hung across every open wall, to talk about her process, which she described as “buying, crafting, dreaming.”

There is an element of performance to these highly feminized acts, as well as a self-proclaimed sense of “outsiderness.” Lucas is participating in the materialist culture that women are so often held to (there are so many things women must to buy to stay “women”), but she does so in all the wrong ways. She’s not buying these beautiful little dresses, or toys, or hair clips, for their intended purpose of being used by a little girl. Rather she’s collecting them just to break them apart and rearrange them, and she’s doing it with both love and hate: the attraction and repulsion to “pink.” As she says: “I love the pink doll, but I love even more ripping her head off.” 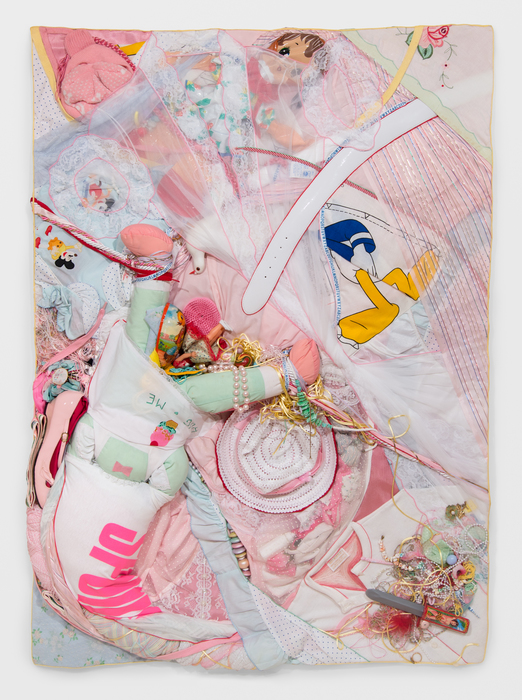 Lucas is dismantling these objects associated with subjugation in order to gain power and agency over them. By breaking apart, refastening, and sewing these feminized objects into new configurations, she recontextualizes the cheap, feminine aspects that are ascribed so little social value. She confronts what goes on beneath the surface.

When these works were first presented in the ’80s, many critics seemed to miss out on the abject, implicit horror that is buried under the tawdry, girly, saccharine luster. The symbols were often attributed to humor or satire—but the work is not so much satire as it is a coded truth telling of the dangerous business of growing up a girl. This truth is filled with contradictions: pleasure and pain, objecthood and self, women’s bodies as “leaky containers,” as curator Marie Catalano so aptly described it. Many of the “feminine monsters” on view at JTT don’t explicitly deal with issues of menstruation, sex, or violence, but the symbols are there to provoke such intonations—like the tiny red rivulets made from embroidery floss or beads, or the little rubber ballet flat placed right at the crotch of a dress skirt that is being lifted open by ribbons and threads (Jane Baar, 1985). The narrative constructed through these inanimate objects poking, pulling, or revealing themselves, still feels shocking and titillating after all these years. 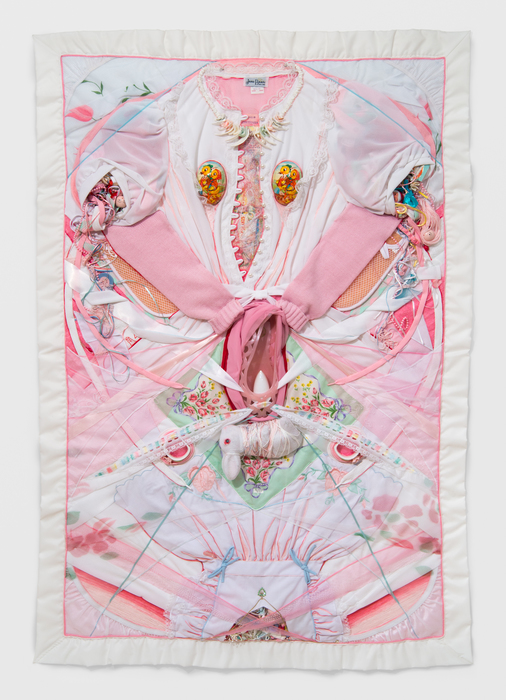 I asked Lucas how she feels about seeing the work on view once again, especially in light of the women’s protests and movements that have been rekindled in the wake of the current Republican administration. “Everything that I’ve been seeing at these marches, we tried in the ’80s and were marginalized,” she says, exasperated. And yet the persistence excites her. Even though we are seeing generations of women fighting arm in arm in what seems to be a Ground Hog’s Day of protest against the patriarchy, after thirty years, at least the fight is getting more explicit. Lucas quotes fellow artist Joan Snyder when she says “pink is sex,” which is why she feels the pussy hats carry such a strong message—she loves the idea of an army of women angrily knitting pink hats in protest, then taking to the streets wearing their crafted vulvas on their heads.

It also excites her to see this work re-shown, especially in the context of a contemporary gallery run by women. For her, it’s an opportunity for the work to be seen with fresh eyes, for its onlookers to finally understand how it connects to the feminist art trajectory. It is the chance to be re-written into art history for creating, as she says, “a complex, emotional, and pleasurable examination of growing up as a girl in a sexist world.”

Olivia B. Murphy is a writer and editor based in New York, covering arts and culture. Her work has appeared in various publications both in print and online, including L'Officiel Magazine, Hyperallergic, Freunde Von Freunden, Whitehot, Riot of Perfume, doingbird, and Whitewall Magazine.

Posted by Olivia B. Murphy on 2/14/17
Tags: assemblage collage craft feminism pink Bonnie Lucas
RELATED ARTICLES
COMMENTS (0)
ArtSlant has shutdown. The website is currently running in a view-only mode to allow archiving of the content.