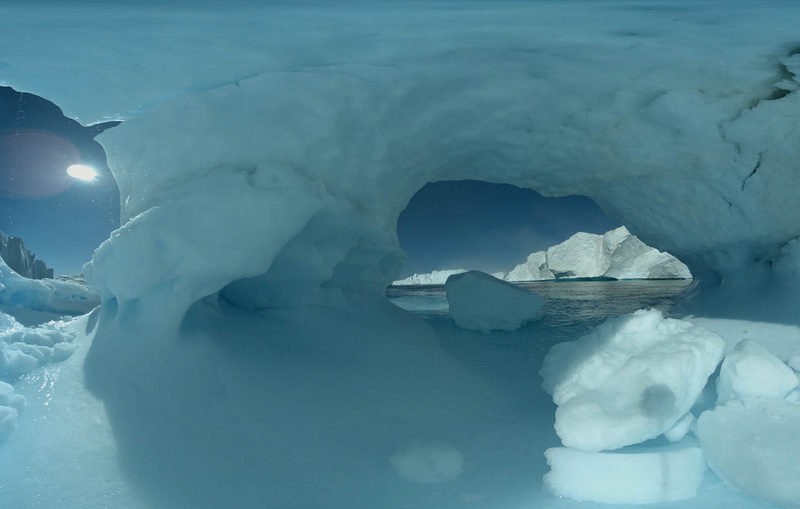 With Climate Under Threat, Artists Look to Virtual Reality

The Sundance Film Festival opened its 33rd annual edition in Park City, Utah, on January 19, under one presidential administration. It closed 10 days later under another, very different one. In those portentous intervening days Donald Trump’s White House reforms reverberated across the U.S. and beyond—from an executive order on immigration to the whitewashing of climate change and moves designed to incapacitate environmental agencies. Within moments of Trump’s inauguration virtually all mentions of climate change were deleted from the White House website and media blackouts were placed on scientific and environmental agencies.

Among the themes explored at Sundance this year, the environmental crisis took center stage in a section entitled The New Climate. The section comprised 14 documentaries and short films, as well as three virtual reality artworks included in New Frontier, the festival’s platform for art and alternative modes of storytelling. The festival has a legacy of showcasing stories about the environment, and in a world of uncertainty, where climate change is denied by those in power and “alternative facts” seemingly rival science, these New Climate works have particular poignancy.

Chasing Coral and Melting Ice use VR to advocate, but also to document, and each plays companion to a documentary feature film shown at the festival: the former pairs with Al Gore’s new follow-up to An Inconvenient Truth, while the latter accompanies an eponymous documentary. The VR works, viewed via a headset with 360-degree visibility, record fast-changing natural environments, and offer proof of the effects of the transforming climate. 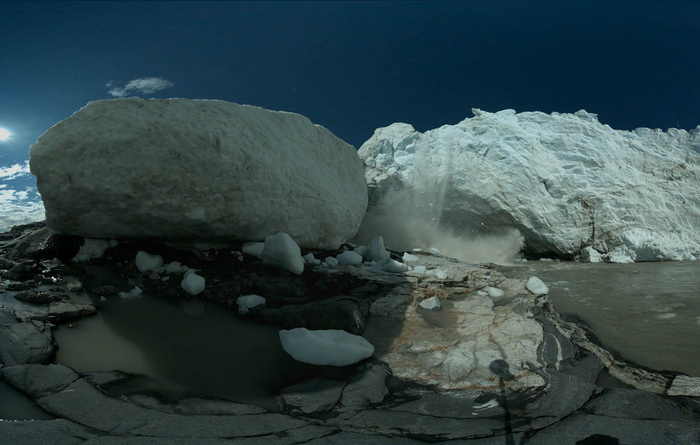 Dennis’ 10-minute Melting Ice takes us to Greenland’s glaciers to observe effects of global warming. The director notes that “the ethics of documentary still apply in VR. We’re bearing witness to a real event and it’s more important than ever in this era of fake news and untruth.” He explains that VR is a truthful medium for storytelling, in which the artist “has to let go of much of the control, and surrender many editing tools. There is this archival element to placing a VR camera into a space. It lets reality unfold in a completely pure way, and you end up with raw and true documentation of what is happening.”

Dennis explains that the related documentary, An Inconvenient Sequel: Truth to Power (Bonni Cohen, John Shenk), would “cover the hard science and Al Gore’s message, while the Melting Ice VR experience would convey the urgency of the climate crisis in a simple, emotional way.” In the VR work, after a brief exchange between Gore and a leading glaciologist, the dialogue hushes and we are left to follow the journey of melting ice: crystal blue glacier water rushes past, before running muddy brown and flowing into the open water. Cracks and heaves ring out as parts of the glacier break off, and we drift out to the horizon. 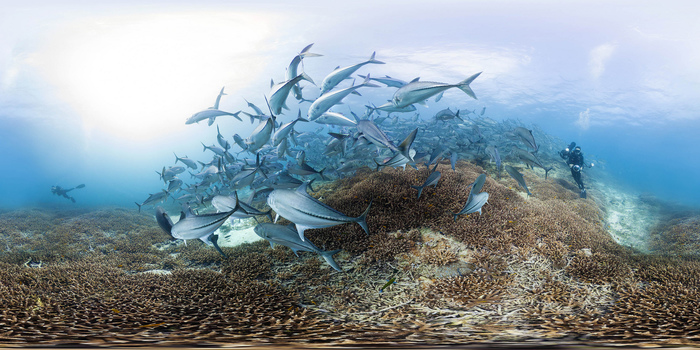 The central subject of Chasing Coral is the act of observation and record-keeping itself. The six-minute experience welcomes you into the world of passionate scuba diver and researcher Zackery Rago as he documents the devastating coral bleaching at Lizard Island on the Great Barrier Reef off Australia. Rago’s narration accompanies us as we join him on a boat, then dive underwater to witness the shocking proof of coral bleaching. Orlowski explains that “exploring the ocean is inherently an immersive experience that very few have access to,” adding that “the VR medium is a great tool to allow people to go on virtual dives, and can transport you into the ocean in a way that is distinct from other traditional forms.”

Chasing Coral is like a behind-the-scenes companion to the feature-length documentary, and partly a portrait of perseverance. We come to understand Rago’s dedication as he returns multiple times each day to record changes to the coral bed via time-lapse photography. Orlowski explains that they “wanted people to have the experience of diving with Zack, in a way that would be a great complement to the feature [film], but also work as a stand-alone piece.” 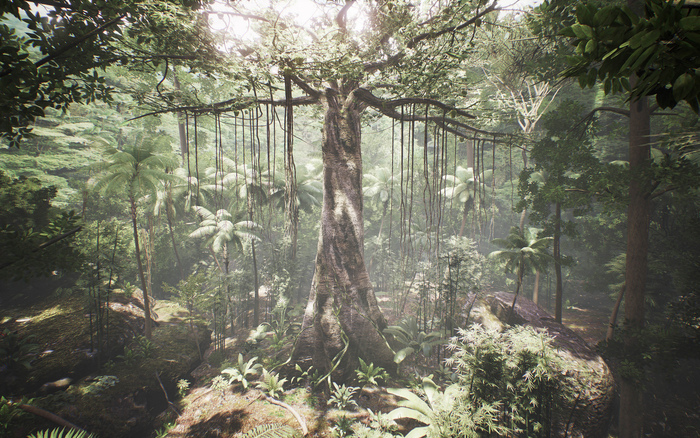 A still from Tree by Milica Zec and Winslow Porter, an official selection of the New Frontier VR Experiences at the 2017 Sundance Film Festival. Courtesy of Sundance Institute | Photo: Jakob Kudsk Steenson

Inspired by the threats of deforestation, the message of Milica Zec and Winslow Porter’s Tree is embodied in the experience. Unlike the aforementioned films, Tree functions by constructing (rather than documenting) an imperilled environment. Partnering with the Rainforest Alliance, the project description urges that “forests are critical to the survival of every living thing on earth. They’re a source of air, water, shelter, and medicine. Forests are also our best defense against climate change.” But the instruction ends there.

Wearing a headset, plus connectors on your forearms and back, you enter an entirely CGI virtual forest and spatial soundscape enhanced with vibration. With your body as trunk and arms as branches, you become a tree in the rainforest, growing from seedling to full form and bearing witness to its fate firsthand. You shoot upwards through the soil, your body vibrates, and then you soar above an imagined landscape, the sounds of the rainforest ringing around you. The creators say the experience is designed to be universal, “a narrative without words, for people from all backgrounds and languages”—just as the changing climate affects us all.

There is a balance to be struck in portraying the climate crisis so as to inspire activism, not invoke defeatism. The artists channel the immersive capacity of VR to promote awe, empathy, and compassion. The cocooned use of the headset and earphones is very personal, while 360-degree perspective lets you see what another person sees, and walk in their shoes. But even more so, these works taps into the need for action, beyond emotion. 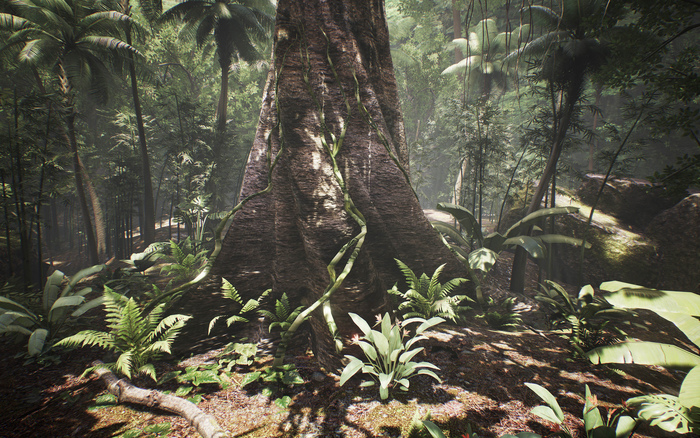 A still from Tree by Milica Zec and Winslow Porter, an official selection of the New Frontier VR Experiences at the 2017 Sundance Film Festival. Courtesy of Sundance Institute | Photo: Jakob Kudsk Steenson

After the beauty of glacial Greenland, the final scene of Melting Ice drops us into a flooded Florida neighborhood. The intention, says Dennis, is “to bring the reality right to our doorsteps, to make that connection that this is coming and that there are these consequences to our actions.” The trick is not to inflict so strong an experience as to render a feeling of powerlessness. “With such big issues at hand, it is possible to become overwhelmed. But if we can cultivate compassion, [this] involves moving closer to the pain to help.”

Despite the dire urgency of their subject matter, the parting message of these works is positive. Tree, the second instalment of a trilogy, which will conclude with what Zec describes as “an experience centering on human hope.”

Meanwhile, Dennis reflects on the “ancient idea, talked about by the Dalai Lama, by Einstein, that our purpose is to transcend our own first person perspective.” He says that VR “is a unique language by which we can place people into another person’s mind, which will be key to a more evolved society.”

Orlowski cites the power of these works to bring people to otherwise unreachable places, to see what is invisible: “A lot of people don’t know what’s happening in the ocean because it’s out of sight, out of mind. If we can bring the reality to the surface, and provoke audiences to confront the significance of what’s happening, our hope is that it’ll change the conversation away from debate and towards action.”

There are valid debates about whether VR heralds a new age of compassion, whether the device can really function as a so-called “empathy machine.” Perhaps it's more crucial to get films seen by policymakers—Orlowski's 2012 documentary, Chasing Ice, for example, was screened for Congress, the Obama White House, and the United Nations. But with melting ice caps and dying reefs, these artists aren’t waiting for a verdict. They bring optimism and cutting-edge technology to the task of representing some of the planet’s least-accessible places—places that stand to lose the most in a changing climate. Instead of despairing at urgent global issues, these very personal experiences give us a timely reflection on common understanding, the power of the individual, and the importance of action.

(Image at top: A still from Melting Ice by Danfung Dennis, an official selection of the New Frontier VR Experience program at the 2017 Sundance Film Festival. Courtesy of Sundance Institute | Photo: Danfung Dennis)