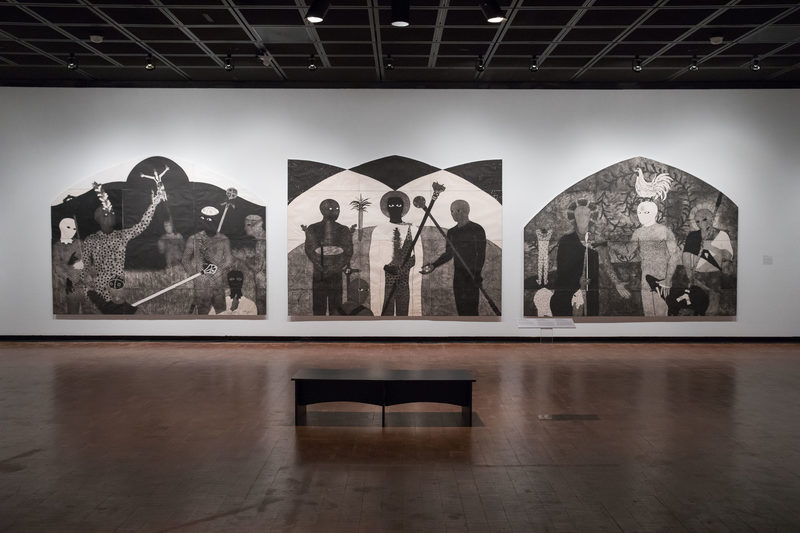 Nkame, a salutation that translates to “greeting” in the Abakuán language, welcomes Belkis Ayón’s first solo show in the United States to the Fowler museum. After Ayón’s death in 1999, the Afro-Cuban artist’s body of work was declared a patrimony by the Cuban government and was not allowed out of the country until recently. Ayón’s mysterious black-and-white prints appear as an obscure treasure that has just been uncovered, so it is fitting that her work be centered on the mythology of the Abakuá, an Afro-Cuban all-male secret society similar to the Masons.

Ayón used Abakuán myths as the scaffolding for her striking visual universe. The fact that the religious society’s stories and rituals were hidden and repressed under communist rule paralleled the overlooked social, gender, and racial inequalities Ayón and others like her experienced. 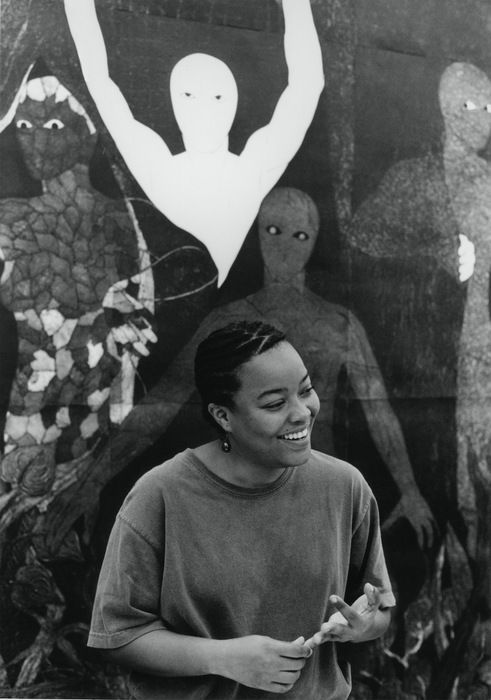 The exhibition plays a video of Ayón filmed one year before her tragic death by suicide at the age of 32. She is meticulously crafting a print in a process singular to her, brought on by socioeconomic restraints and her own perfectionism. Because art materials were not readily available to Ayón at the height of Cuba’s economic crisis, she had to create new methods of printmaking. Her collographs are a mixture of collage and lithography, pastiched from little bits of paper and glue that form the varied textures in her work. She also preferred to combine multiple prints together so she could gain more control over her intricate large-scale works. Contrasting patterns of fish scales, flora, and animal prints create vibrant textures that enrich her dramatic imagery and masterful technique. The work’s esoteric subject matter adds another layer to her work.

Ayón used the mythology of the Abakuá as the aesthetic language of her work after learning about them in high school. According to her sister, the artist did extensive research into the Abakuá, but did not adhere to or mean to accurately represent their ideology. Instead, she created her own imagery from the stories of the Abakuá and combined them with the symbols and structures of Christianity and Catholicism. She also included women in her depictions, subtly making larger social criticisms. “The intolerance, sacrifice, impotence, dogmatism, censorship and fear that Belkis portrayed through the Abakuá myth, however, clearly referenced what she herself experienced, as did those who shared her social, political, and cultural circumstances,” Cristina Vives, Ayón’s friend and the guest curator of this show, writes in the catalogue. 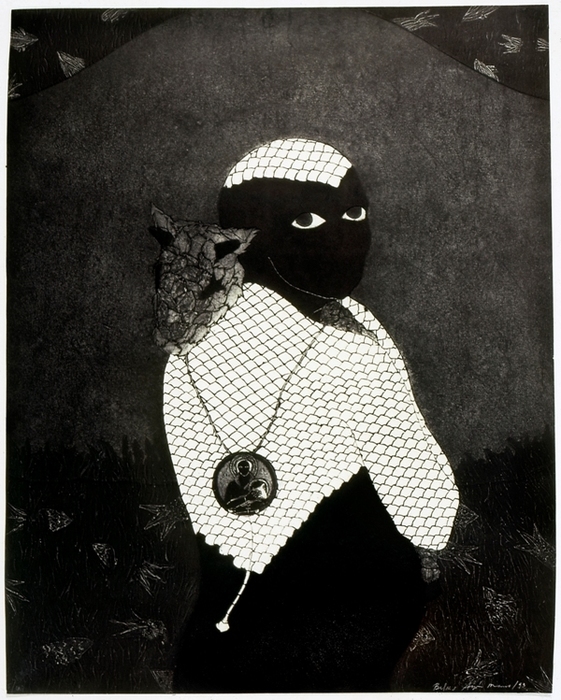 Many critics of her time mistakenly interpreted Ayón’s work as folkloric illustrations of Abakuán myths, but Ayón’s choice of subject matter had nothing to do with her own religious ideology. No other known artist at the time had focused on the secret society, which allowed Ayón to freely interpret its stories. Through the language of a society rife with hidden meanings, she was able to meditate on larger issues of sexism and racism.

Ayón did this by focusing on the female figure of Sikán, whom Ayon saw as an alter-ego. Sikán, like all of the figures in Ayón’s world, is mouthless, reflecting both the actual myth of Sikán and the silencing of Black women in society. Sikán was a princess who accidentally captured a fish while drawing water from the river. She heard the fish’s loud bellow, an utterance that turned out to be the mystical voice of the deity Abakuá. Because women were not permitted to hear this sound, Sikán was sworn to secrecy. When she told her fiancé the sacred knowledge, she was condemned to death.

Sikán is represented throughout Ayón’s work as a Christlike figure, most notably in La Cena (The Last Supper) (1991) which seats Sikán in the center of a long table surrounded by male and female apostles. Other triptychs such as Perfidia (Perfidy) (1998) illustrate her mouthless figures participating in Abakuán consecration ceremonies which prepare for but do not depict the sacrifice of Sikán.

While in Abakuán mythology Sikán violates a secret of the brotherhood, in Ayón’s world she is a martyr. She allows her heroine to live, albeit trapped in the patriarchal society’s rituals. In later works, Sikán becomes increasingly fearful of her place in this society, such as the not-so-subtly named Dejame Salir (Let me out!) (1997), a circular print of Sikan being consumed by flames. A goat, a symbol of sacrifice, lurks closely behind. The dread that pervades Ayón’s later works also coincides with the artist transitioning from large to smaller circular prints. “The action took place within a structure she had never used before. What was really happening, however, was much deeper: space was closing in on her,” writes Cristina Vives. 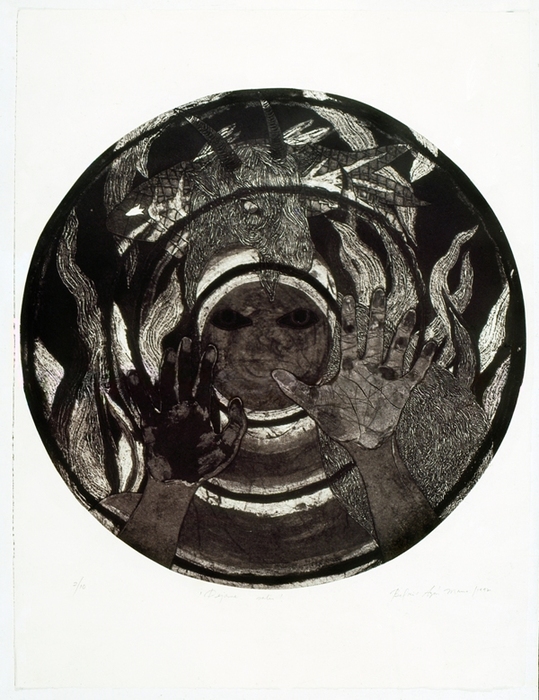 There is some speculation that Ayon, like Sikán, put herself at risk by exposing the secrets of the Abakuá, though with only 21,000 members, the society did not hold very much religious or political power, especially under the communist leadership of the time. Yet, a woman betraying a patriarchal network does convey something universally fearful. Sikán infiltrating the Abakuá could also be a metaphor for the struggle of an Afro-Cuban woman trying to exist in an art world that excluded and misunderstood her for decades.

It is possible to read Sikán’s tragic journey as parallel to Ayón’s encroaching depression, which she kept secret even to those closest to her, though her life and work still leave many mysteries that are just now beginning to be uncovered. With changing US-Cuba relations, Nkame will hopefully mark the beginning of her work being more widely researched and exhibited. 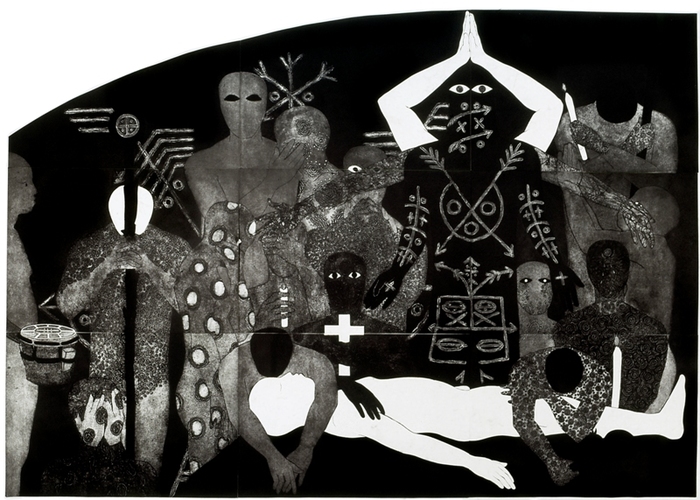