If I can free a humble material from itself, perhaps I can free myself from myself.

This text is written on a scrap of paper, torn from a sketchbook and almost carelessly tacked to the wall of Marijn van Kreij’s studio, just outside of Amsterdam. It’s a daily reminder resonating in the space where the artist spends most of his waking hours drawing and painting, but also reading, looking at pictures from his ever-growing art book library, immersing himself in this repository of text and image.

Van Kreij’s work is the antithesis of what art is according to many: the work of an individual genius. At first sight some of his older drawings don’t exceed the level of doodles, but since he consciously started to reproduce them, a different outlook emerged somewhere beyond the original image. Van Kreij’s work is not about the drawing; it’s about the act of drawing.

This Zen-like approach has not gone unnoticed. Van Kreij has been invited to quite a number of international shows and over the years has gained substantial recognition. But even after winning several awards he is still slightly ill at ease in the public spotlight. According to him, the artist is merely an intermediary, standing between art and audience. But at present it seems van Kreij also intentionally plays around with the notion of artistic genius. His current show at the Hermitage Amsterdam, part of the prestigious ABN AMRO Art Award 2016, has a telltale title: Reclining Nude with a Man Playing the Guitar. The subject is, you guessed it, the work of Pablo Picasso. 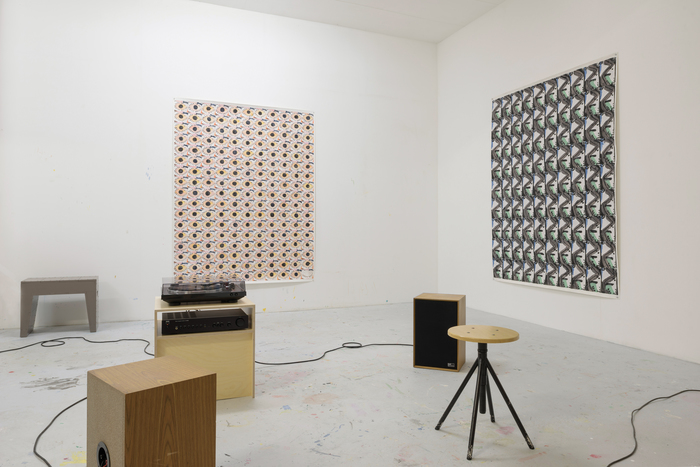 Edo Dijksterhuis: So why did you choose to grapple with the work of this absolute giant of 20th century art?

Marijn van Kreij: To be honest, for a long time I was never really that interested in Picasso’s work since his vast production seemed to come about so effortless, without any room for doubt. It always put me off a little. But when I got my hands on the book Late Picasso, covering his work from 1953 to 1972, I was struck by how free and straightforward these late paintings are. You can actually follow the separate steps within each painting. The full process is still traceable, almost like a drawing. For me they represent a carefree and unimposing style.

After some initial experiments with repeated imagery on a single sheet of paper, things fell into place in 2012 when I did a joint exhibition with Bas van den Hurk and Koen Delaere at Autocenter, Berlin which we called Picasso grid. This is how the series started. By using a pre-drawn grid, using gouache, I was suddenly able to paint more freely, at a relatively rapid pace. When I am working, I rarely correct anything, I simply move on to the next frame and try again. I’ve applied this method to paintings by Paul Klee, Gunta Stölzl, and a few other artists, but I kept returning to Picasso. It felt natural. He too kept revisiting certain themes, constantly looking for different painterly solutions for the same subject. Leafing through the book you can see how he painted his studio again and again, repeating the same elements in different ways. 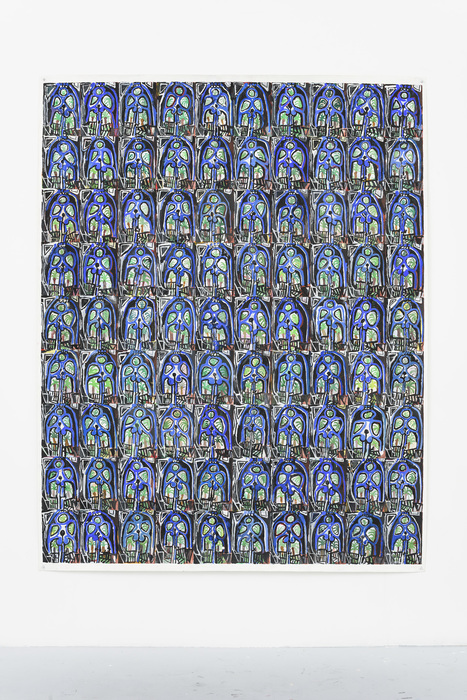 ED: In your paintings you have repeated fragments of those paintings twenty, sixty, sometimes more than one hundred times. How do you select those fragments and how do you set up a painting?

MvK: I would cut out a rectangle from a piece of paper and move the window across the images. Depending on what I am interested in at that moment I would settle for a more abstract composition or something more figurative. There are days I cannot find anything to my liking. But when it does happen, I make several small sketches and shortly after that start working on the bigger grid. Each work demands its own amount of time. I don’t work from top left to bottom right but all over. That way the work doesn’t function as a documentation of linear time. 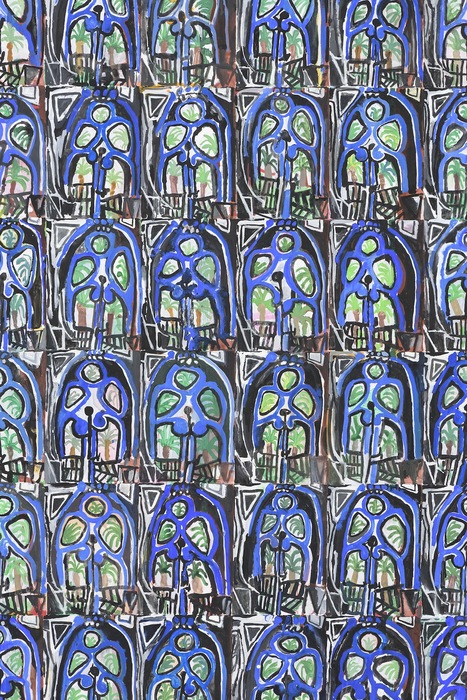 ED: So how would you qualify your working method: as copying or a repetition exercise or something else altogether?

MvK: I’m interested in the manual aspect of painting: how a brushstroke can never exactly be the same. I often consciously toy with different ways of painting the same image and try to vary as much as possible. So in a sense I focus on the differences within sameness. Sometimes my work is interpreted as a commentary on contemporary visual culture, the endlessly reproduced stream of images reaching us through the internet and other media. But for me it’s mostly about a love for and fascination with the flat image.

ED: That sounds extremely personal, yet your work has a certain detached air about it. How do these two come together?

MvK: I was originally trained as a graphic designer. When I went to art school the problem was always: what to draw? What is important enough to be the subject of a drawing? At some point I started to make line drawings based on found footage that I projected onto big sheets of paper. It created a distance between me and the image. By layering different images I left ample room for chance but still the outcome would feel really personal. In retrospect this was a pivotal moment in my artistic development.

Later, when I started doing “double drawings,” something similar was happening. By focusing on the repetition of free, careless marks and brushstrokes, the attention moved away from very idiosyncratic, almost private content to a more formal approach: the act of painting and drawing itself. I was intrigued by how endlessly different these two seemingly similar drawings could be. 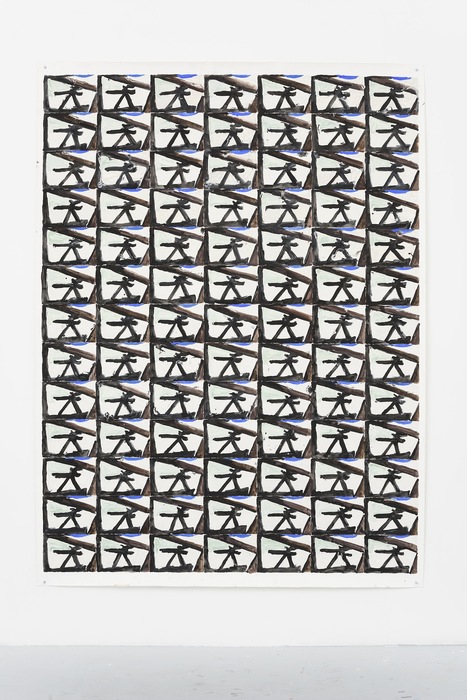 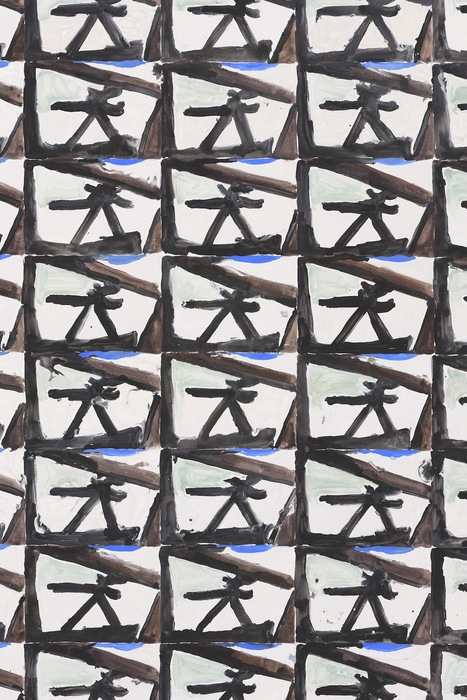 ED: How does this relate to your recent work, the series of Picasso grids for instance? Does it matter what is represented in the image?

MvK: I would say it’s still similar to the diary-like content of the doodle drawings. The choice for a certain detail very much depends on my mood and thoughts at that very moment. On another level you could say I often try to strike a balance between figurative and abstract. Some details, for instance, have a somewhat removed reference to nature; for example, the feather from a woman’s hat in Untitled (Picasso, Man and Woman, 1969). And it’s like a visual diary: it documents the passage of time.

ED: So your art is a plea for slowing down?

MvK: Yes, exactly. In exhibitions I often combine my work with a counterpoint, something to change the perception of the work altogether. For a recent show at KLEMM’S in Berlin I presented my paintings alongside a sound piece by Andrea Büttner called Roth Reading, in which she recites all passages on shame and embarrassment from Dieter Roth’s diary from 1982. Everyday incidents of saying the inappropriate thing are mentioned, but he also writes about what it means to put an artwork into the world. I wanted to involve the viewer in my questions and doubts on progress. 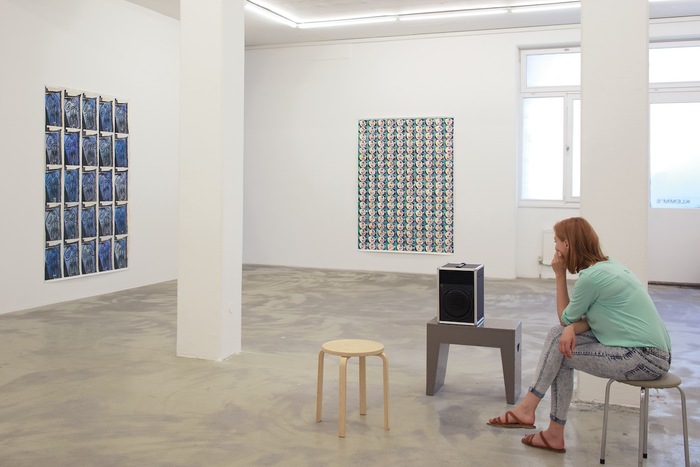 Installation view of Nude in Front of a Garden, KLEMM’S, Berlin, 2016

ED: For the Hermitage show you combined your paintings with music by singer songwriter Bonnie “Prince” Billy, the “man playing the guitar” in the exhibition title. The catalogue even comes with a flexi disc so people can repeat at home the experience of looking at your work combined with the song “Go Folks, Go.” Why did you choose this combination?

MvK: I first heard this song during a live performance and it felt like an encouragement. Especially the last couple of lines are heartening: “Go Folks! Go forth! Trust your brain! Trust your body!” While my works on paper seem to bring the painted fragments almost to a standstill, the music is all about movement and change. I like the slight discrepancy between the two, without placing one above the other. For me it’s about creating this gap. I am still asking myself: what does progress mean? What do we qualify as progress? 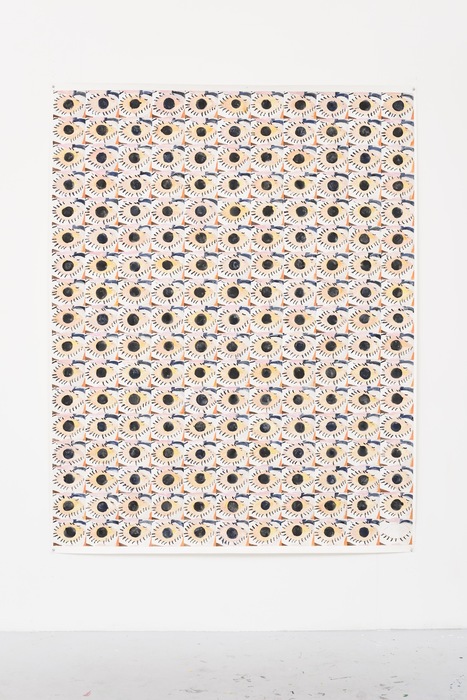 ED: You don’t believe in progress?

MvK: Well, I only recently realized how omnipresent the linear idea of progress is in Western culture. This was one of the reasons I wanted to revisit Japan, where the historic notion of time is cyclical. The Japanese put less emphasis on individual identity and social context is more important.

In the documentary Cave of Forgotten Dreams by Werner Herzog, the story is told of an anthropologist following an indigenous Australian into a cave, where he—out of the blue—starts to touch up a prehistoric cave painting. When he is asked about what just happened, he is not quite able to reflect on what he just did: “this is just how it should be.” It shows how personality and time do not matter to him. I wonder to what extent we can take such ideas into the present time. I think this is a beautiful example of a possible different approach to art. 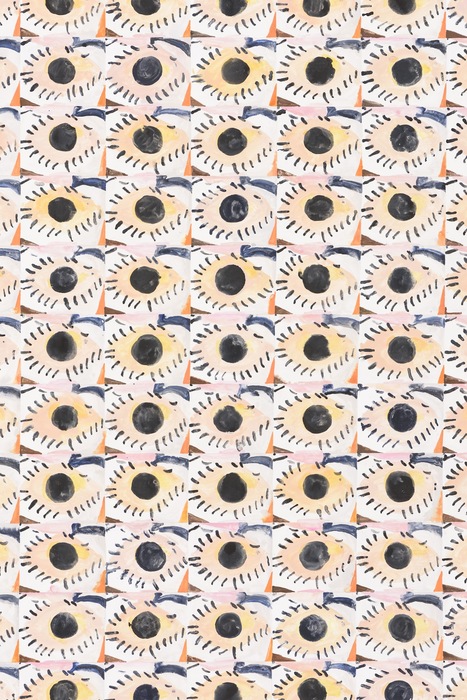 (Image at top: Installation view Reclining Nude with a Man Playing the Guitar, Hermitage, Amsterdam, 2016. All images: Courtesy of the artist)

Posted by Edo Dijksterhuis on 12/16/16
ArtSlant has shutdown. The website is currently running in a view-only mode to allow archiving of the content.