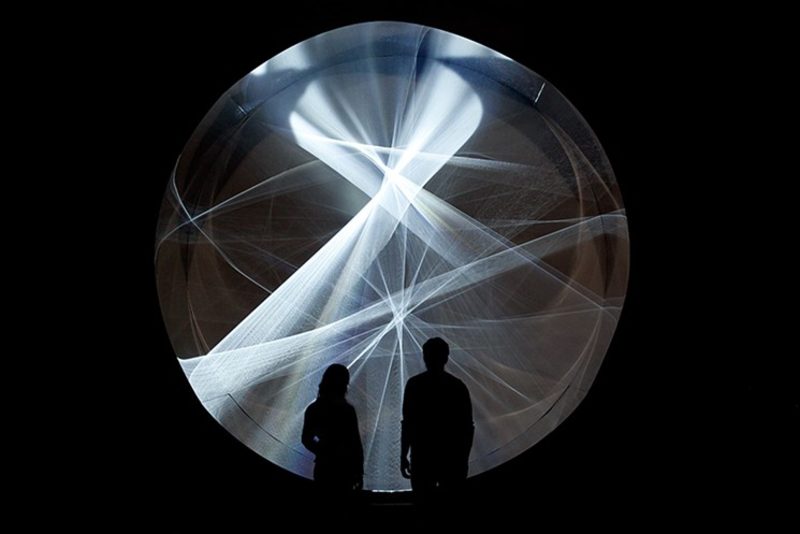 Art Basel attracts seasonal art world devotees to eat, drink, and spend incredible amounts of money on contemporary art at fairs pitched across Miami Beach and the mainland. Running concurrently with the fairs is Miami Art Week, an amalgamation of the city’s best museum and gallery shows, vying for international attention.

In recent years the local museum scene has gone from sparse to highly competitive. The Perez Art Museum Miami (PAMM) is not quite four years old, and the two-year-old Institute of Contemporary (ICA) is already nipping at its heels with its top-notch programming. These, plus the city’s many private collections-turned-museums, join mainstays like The Bass Museum, the Wolfsonian FIU, and the Museum of Contemporary Art North Miami. Here’s what to keep a look out for amidst the mayhem.

Thomas Bayrle, One Day on Success Street, at ICA Miami 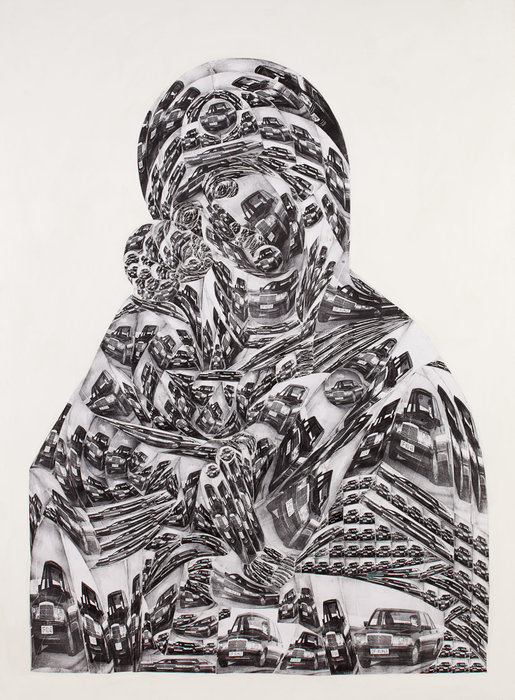 German artist Thomas Bayrle celebrates his first US museum solo show with a retrospective surveying over fifty years of work. The show features 75 paintings, sculptures, and videos that trace the innovative, but less publicized work, of one of the most important forces in European conceptual art. Though a newcomer on the domestic scene, Bayrle’s work couldn’t be more relevant. His clinical depictions of humanity border on the dystopian, focusing on the intersection of man, technology, and the ballooning effects of the collusion between the two in a chaotic world.

“Bayrle is known for his prescient depictions of mega cities and bodies consumed by machines—images that foreshadowed developments in our culture, not to mention the incorporation of digital techniques into the artistic realm,” said Alex Gartenfeld, deputy director and chief curator at the young museum. 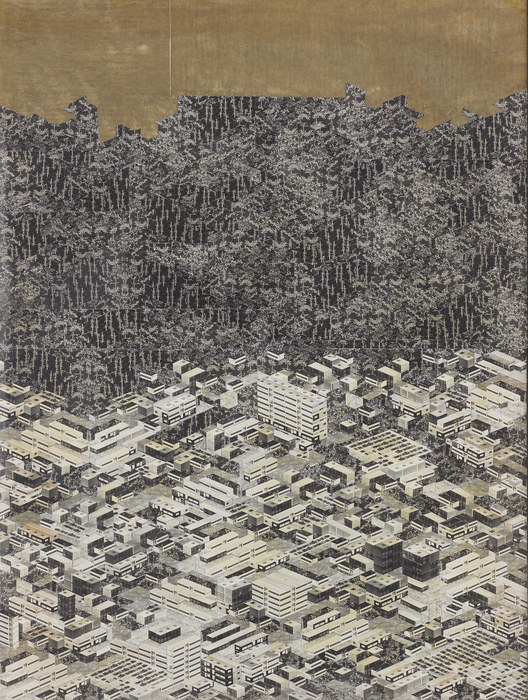 Thomas Bayrle, Stadt am Wald, 1982. Courtesy of the artist and ICA Miami

For Gartenfeld that show will not only mark the last exhibition at the Moore Building (the ICA’s temporary home, as construction is wrapped on a more permanent structure around the corner), but will also bookend his tenure as the museum’s seminal head. The ICA branched off from the MOCA in late 2014. Last year, Ellen Salpeter, formerly of the Jewish Museum in New York, was brought on to head the fundraising efforts.

The centerpiece of the Bayrle show is Wire Madonna, a site-specific installation in the museum’s atrium that recalls a central motif in the artist’s work. The juxtaposition of biblical elements with a staunchly industrial medium is apropos of the very same clash—old versus new, human versus machine—that he continues to explore throughout his oeuvre.

“As the artist's most significant sculpture to date—and for an 80-year-old artist, a testament to his relentless innovation—the huge icon demonstrates Bayrle's fascination with popular images and mass audiences,” Salpeter said of the piece. 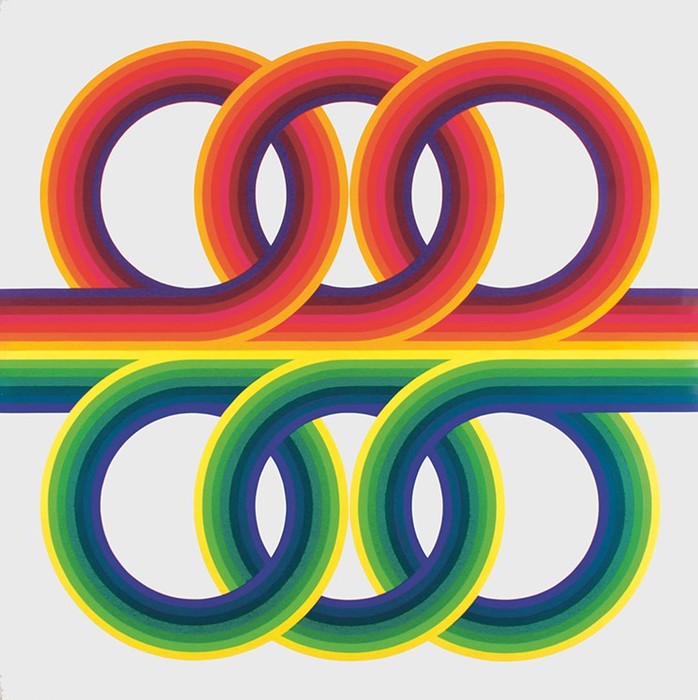 Since Franklin Sirmans took over the reigns at PAMM early last year the museum has made it its mission to promote contemporary artists from Latin America and the Caribbean, a demographic typically overlooked by the establishment. To that end, this season PAMM is highlighting the lesser-known work of Argentinian Julio Le Parc, in a retrospective entitled Form into Action.

Under the eye of curator Estrellita Brodsky, three of the museum's galleries were transformed to reflect different strains of Le Parc’s vast and highly varied work. Gouache and ink on paper, labyrinthian installations, paintings, light installations, and heady conceptual pieces with a political bent are presented in a broad survey of one of the most iconic voices in Latin American contemporary art. 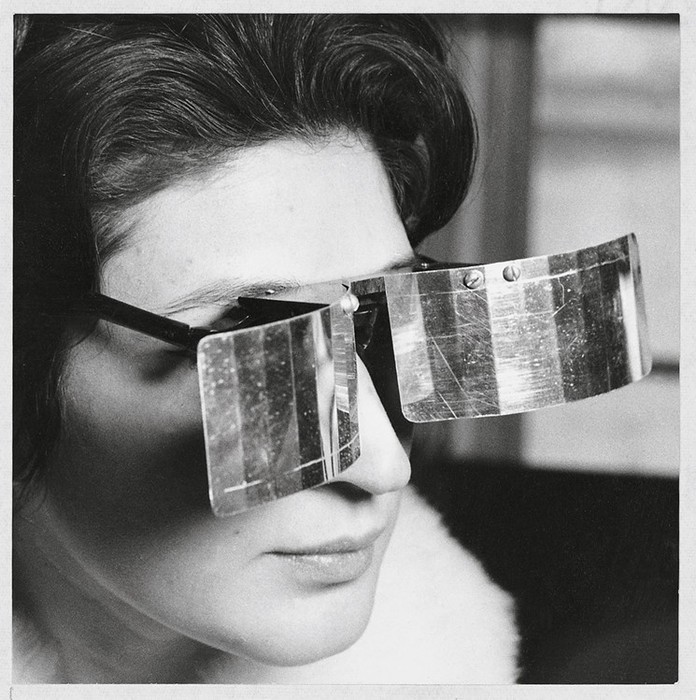 “For Le Parc, art should be a participatory experience,” said Brodsky. “[He] feels very strongly about the importance of art’s immediacy, and that it is at its best when unmediated.”

Le Parc was born in Mendoza, Argentina, in 1928, before moving to Paris in the late 50s to study and hone his craft. In France, he developed close ties with the sociopolitical student movements that greatly influenced his early works, meant to disorient viewers by shocking them out of complacency. As a founding member of the Groupe de Recherche d’Art Visuel (GRAV), he made seminal contributions to the fields of op and kinetic art. Though the bulk of his pieces were produced in the 60s and 70s, his work continues to have far-reaching influence in the region and abroad. 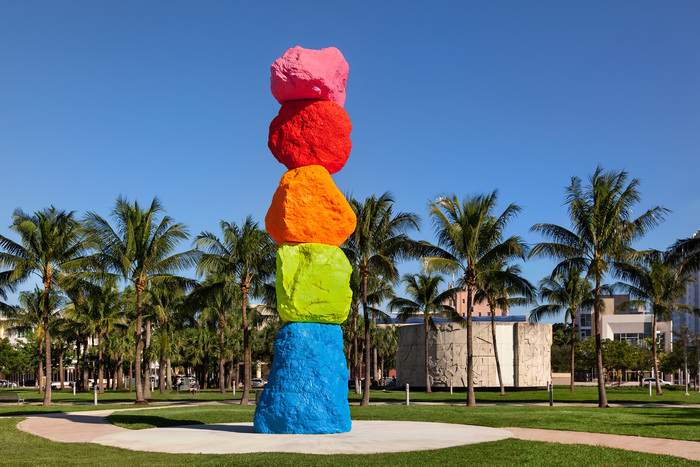 For the past year and a half The Bass museum has shuttered its doors for a massive renovation that plans to double the programmable space without altering the building’s footprint. Several months ago, the museum announced the postponement of their reopening exhibition, featuring the work of art world darling Ugo Rondinone, until the Spring of 2017. Though the Swiss-born, New York-based Rondinone will sadly have to wait for his retrospective, one of his recent pieces has slowly made the trek out from the Nevada desert to the sands of Miami Beach.

As part of a new contemporary art acquisitions initiative, the Bass has acquired Miami Mountain, an extension of Rondinone’s Seven Magic Mountains, which are located off a highway on the outskirts of Las Vegas. The large technicolor pylons received a great deal of attention this year, as one of the most publicized earthworks projects since Christo or Serra confronted the public with their hulking, yet strangely sentimental, endeavors. The 42-foot-tall sculpture—conceived and materialized in the Nevada desert—finds a permanent home installed outside the museum in Collins Park, which is also the site of “Public,” Art Basel | Miami Beach’s annual presentation of large-scale outdoor sculpture. 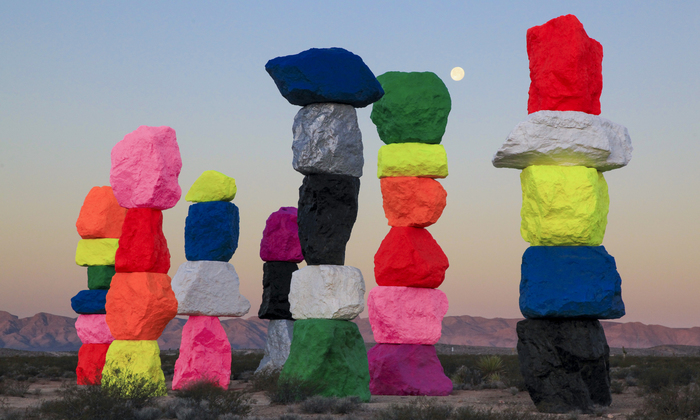 “Seven Magic Mountains isn’t really specific to Nevada. This sort of totemic piling has been happening throughout history,” said Silvia Karman Cubiñá, Director and Chief Curator at the Bass Museum.

The work itself harks at a contradiction between the natural limestone slabs (inspired by “hoodoo” geological formations native to the American West) and their glaringly artificial hues, stacked one on top of the other, in a mechanistic way.

The 42-foot-tall sculpture will not only bring Rondinone’s work to a diverse Miami audience—rather than art buffs who had to actively seek it out in the desert—but offer a glimpse to the artist’s upcoming show inside the newly renovated building. For Miami, a city known for possessing a colorful facade hiding a deeply human interior, Rondinone’s work couldn’t be more apt.

Neil Vazquez is a Miami-based writer and Northwestern University graduate, he usually can be found sipping overpriced coffee, walking his golden retriever, or profusely sweating in yoga classes around town.