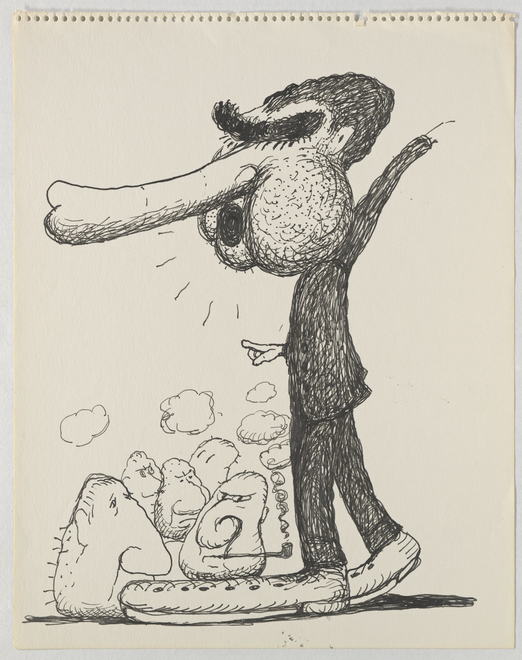 In a Political Nemesis, Philip Guston Found His Greatest Muse

Although this exhibition of Philip Guston’s archly satirical drawings of Richard Nixon was conceived long before last week’s election, it could not have opened at a more opportune moment to illustrate Karl Marx’s adage that “history repeats itself, first as tragedy then as farce.”

Hauser & Wirth has assembled selections of Guston’s Nixon drawings, a series that the artist worked on over a period of several years when faced with a tumultuous personal and artistic crisis—changing his style from abstract to representational and changing galleries from the established Marlborough Gallery to his last gallery and champion David McKee—as well as the tumult of the Vietnam- Civil Rights-era Nixon administration. A refugee from the Manhattan art world, Guston moved to Woodstock, and there, along with his new best friend, Philip Roth, finally found a subject worthy of his skills as a political satirist—a modern-day Hogarth and Voltaire.

There is a wonderful moment in Mel Brooks’ The Producers where the producers, in a bid to lose as much money as possible, create a musical farce specifically designed to lose as much money as possible. Seeking the lowest brow, they bring to life Springtime for Hitler, a kind of aborted Sound of Music. The classic line from the film, Brooks’ “That’s our Hitler!” stands for that eureka moment when one’s expectations of meeting the lowest common denominator have been met. Spoiler alert: the musical is a great success. 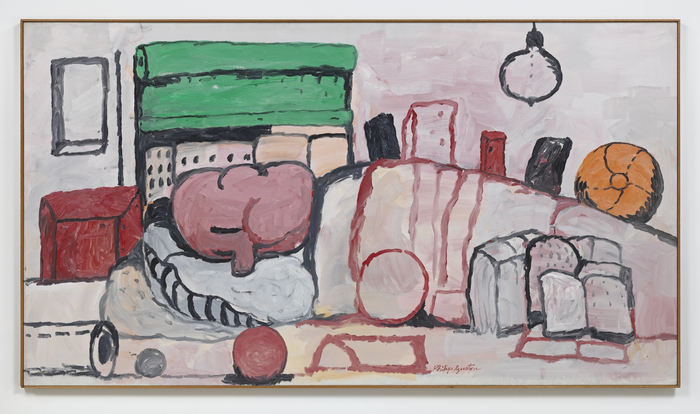 Anticipating the anomaly of this body of work in Guston’s career, In Bed II and Alone (both 1971) give us the archetypal Guston figure, a vaguely Tin Tin-ish, round-headed figure, recumbent in a disheveled bed. He is illuminated by a bare lightbulb, the symbol of poverty and loucheness—“I can't stand a naked light bulb, any more than I can a rude remark or a vulgar action,” says Blanche DuBois in A Streetcar Named Desire—and is suffering under the weight of some heavily painted and heavy-looking objects, like books and sandwiches. Pretty stock stuff for Guston. Up until this moment, Guston had been, if not at the forefront of the Abstract Expressionist movement, at least a pretty faithful member of the cause. Possibly because of his early successes—well-funded teaching positions in Iowa and luminously beautiful abstractions reminiscent of Monet—Guston seemed mired in nothing so much as niceness. A terrible position for an artist to find oneself, especially following his well-received mid-career survey at the Guggenheim. But there had once been another Guston, an early Social Realist painter, whose works, like Martial Memory (1941) or Drawing for Conspirators (1930) showed both a leaning towards the work of the Mexican Muralists, as well as a leaning, well, Left, as well.

A supersaturated solution, such as a glass of salt water, needs only one crystal to transform. Enter Philip Roth, the catalyst out of Guston’s mid-career slump. Roth’s satirical writing, heavily infused with a history of being an American Jew, was something Guston (born Phillip Goldstein) may have found invigorating, along with Roth’s embrace of popular culture, politics (his Our Gang, a satirical novel about a character called Trick E. Dixon), vulgarity, and frank descriptions of human behavior, especially awkward sexual depictions. It is in particular Roth’s vulgarity, a quality that bookish and WASPy New York culture found both fascinating and off-putting, that became an important element for Guston. In the context of Roth’s writing it is significant to note that our word “vulgar” might connote both the original definition “characteristic of or belonging to the masses” as well as the more colloquial "crude or distasteful." This is crucial to our understanding of Guston’s transformative work with Nixon, changing him from what was becoming a popular political caricature to Guston’s greatest muse. 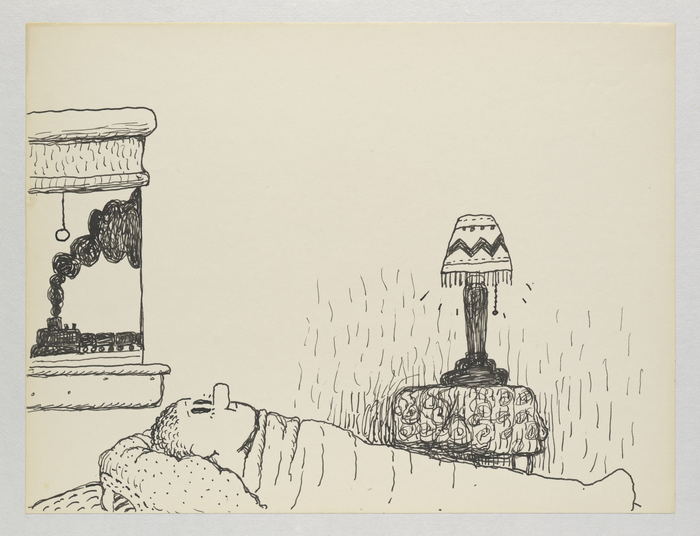 Hauser & Wirth have divided up Guston’s folios, most of which are simply titled Satirical Drawings, into temporal-based groupings, providing us a view of the developing relationship Guston formed with Nixon over the four-year period. In Nixon in Bed (1971), which follows the format of Guston’s bed-locked figures, we see a Nixon homunculus, not quite defined but in various states of distress. One drawing is inscribed “a case of the measles,” showing a spotty Nixon, his body (and we presume by metaphor, the body politic) in a state of sickness. From here Roth’s influence becomes more apparent; Guston develops a Nixon character, a figure whose unshaven face sports a huge cock in place of a nose, which, like Pinocchio's, grows longer as Nixon lies. We see this in the series The Presidency, with Nixon in the company of his trusted henchmen Henry Kissinger (usually represented by a pair of horn-rimmed glasses, reminding us of Garry Trudeau’s Doonesbury comic strip) and Spiro Agnew. The adolescent, graffiti-like quality of the phallus-nosed Nixon reminds us of Jon Stewart’s recent Twitter spat with Donald Trump, where he dubbed the president-elect “FuckFace von ClownStick.” 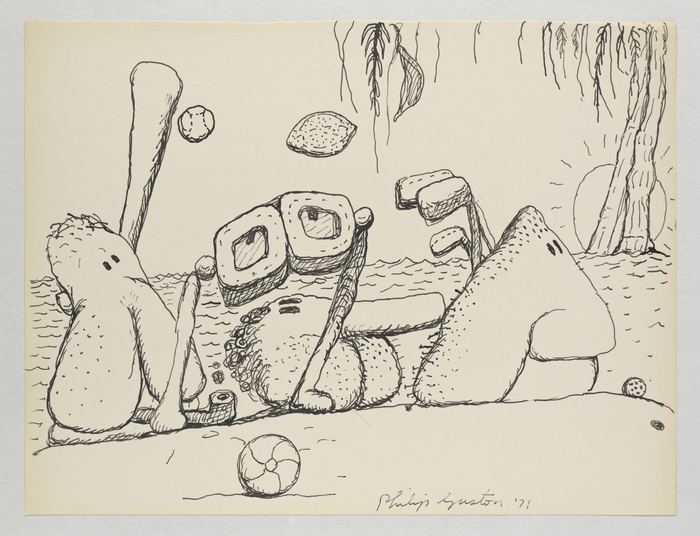 Not all the drawings are masterworks of wit, nor should they be. The greatness of these collections is that they are indeed greater than the sum of their parts. Nixon’s lackeys wear KKK hoods, plot and scheme, and are probed by Nixon’s nose. They speak in a hieroglyphic mock Chinese language, swim in Biscayne Bay, and travel to China, or at least a Chinese restaurant, replete with Fu dogs, coolie hats, and rice bowls. Poor Richard (1972), the most resolved of the folios, is a play on the fall of Nixon, as well as Poor Richard’s Almanac, melding the visual and the narrative in clever play. Nixon’s dog Checkers is rendered as a cubistic checkerboard, and Nixon’s head is transformed into an ancient, pyramidal monolith, decaying under the weight of history. 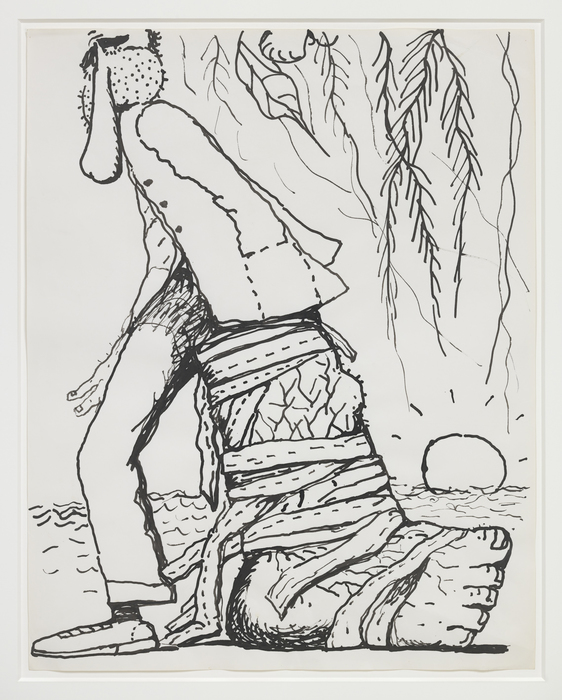 The exhibition ends with the Phlebitis paintings from 1975. Nixon, with an elephantine leg, bandaged and dragging behind him, resigns under the threat of impeachment and slouches off stage to Bethlehem. In the final drawing of the series, Guston shows Nixon on his deathbed—a bit of wish fulfillment, and a little premature. Perhaps Guston was nostalgic for, if not the literal death of Nixon, the Nixon that inspired such an outpouring of work. Guston would create another decade's worth of paintings, relying more heavily on art historical references—great paintings, but bloodless by comparison. Guston’s hideous Nixon golem with elephantitis might be seen more as his Olympia than Death of Marat, such is the luscious delectation with which Guston paints his Hitler.

Bradley Rubenstein is a New York-based artist and writer.