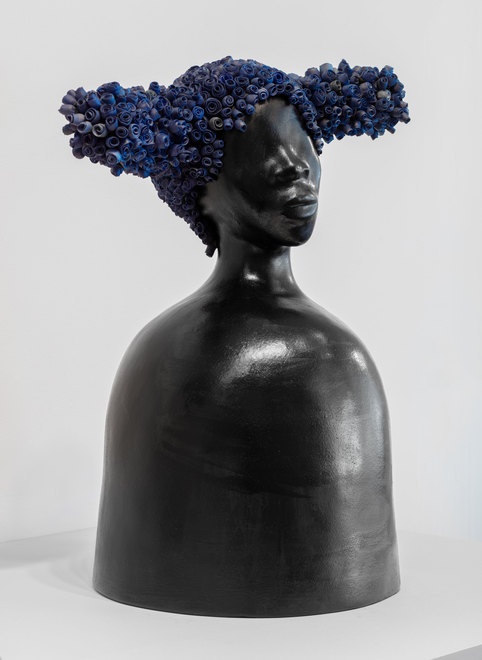 This excerpt from Malcolm X’s 1962 speech, “Who Taught you to Hate Yourself?,” which recently resurfaced in Beyoncé’s Lemonade, resonates and takes form at Hammer Projects: Simone Leigh, curated by Jamillah James. Engaging with notions of racial commodification, assimilation, code switching, and body image, Leigh reveals a certain darkness and developed grace in the life of the black woman in America today.

From the lobby of The Hammer, we see the exhibition’s central work: Cupboard V. This large-scale installation, covered with raffia and evoking the form of a hut from sub-Saharan Africa, occupies the full height of the gallery. As we curve around the outside of the structure, we encounter a series of five figurative works in clay. Each piece depicts a loosely rendered black female figure adorned with tiny flowers, which sit atop each head. These floral headdresses recall the marble busts of women from the Hellenistic period—one of the foundational eras of western aesthetics. 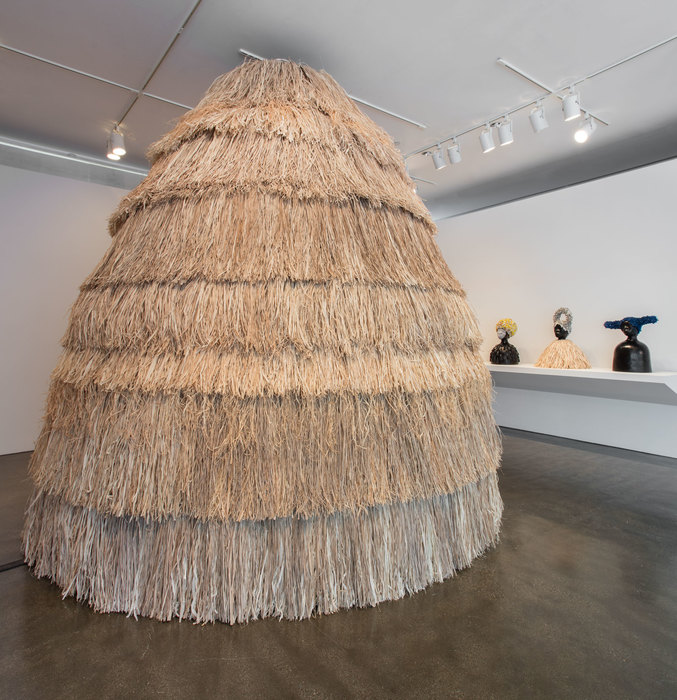 The flowers evoke this western, whimsical, sensibility while each body engages with the formal language of African ceramic vessels, effectively alluding to its material history. The chromatic and constructional contrasts between these elements is striking and begins to tell a story of divergent cultures, assimilation, and code switching. Each floral headdress is a delicate costume on a rough black body, speaking to the place and purpose of adopted visual norms in African American public presentation. The association calls to mind the media hype surrounding Michelle Obama’s period of “natural hair,” the image of Viola Davis carefully securing her auburn, straight-haired wig before going to court in How to Get Away with Murder, and even former MSNBC sports commentator Don Imus’ description of the Rutgers women’s basketball team as “nappy-headed hoes.” Through these works, Leigh reveals the product of the social requirement of black women to wear a western (white) costume, aligning herself with those aesthetics as a channel for social acceptance. 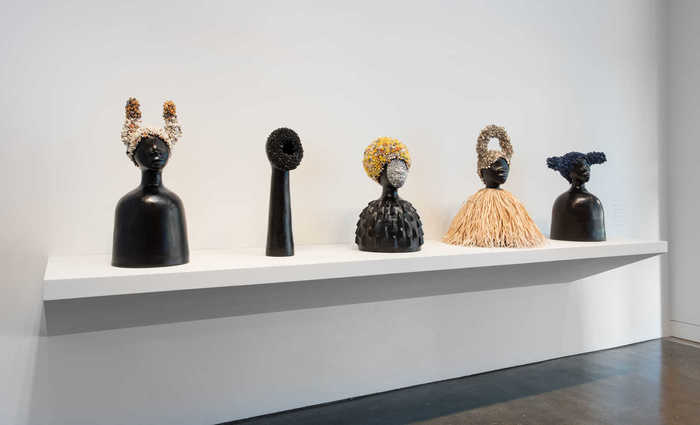 Further, Leigh’s use of a similar, seemingly interchangeable, black base form for each bust brings to mind notions of racial commodification. The vessel-sized scale of these works paired with their serial placement on a wall wedge alludes to the idea of the black woman as an object for consumption and use. From this perspective, these works speak to the impact of the suppressive forces that dilute the specifically African and give rise to what we begin to experience and perceive as African-American. This cultural critique of the white power structure that enforces the need for assimilation engages a learned cultural need to make white people comfortable with a black presence as a prerequisite for positive reception. The one figure without a headdress, No Face, anchors this concept. In this work, the familiar black base form has a wreath of black flowers surrounding an opening where a face would otherwise be, indicating a loss of agency and humanity as a consequence of non-conformity.

Completing our circular progression around the hut, the concept of perception and performance gains power as we find the entrance to the structure. Inside, an early model television rests on the ground, playing a video of a black woman in a gold dress dancing to a slow, haunting melody heard throughout the room. As we look down upon this display, the dancer intently rehearses a routine in an empty studio while lifting one side of her dress to reveal two ankle rattles used in African dance. The cultural intersection in this video, contextualized by the hut, displays the literal “song and dance” performed by black women in the west for passage through a white world. 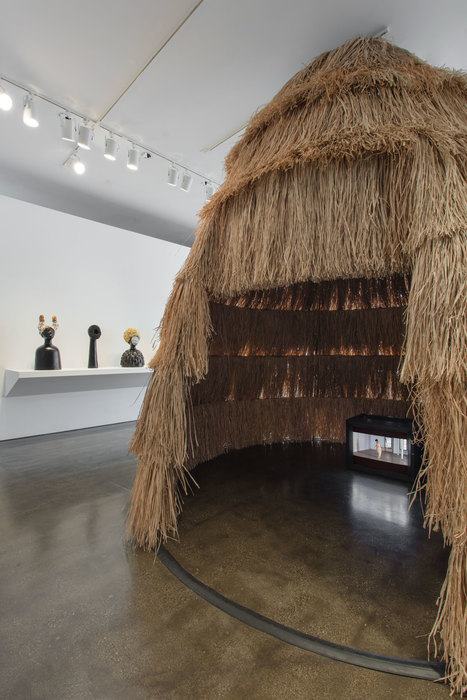 The full meaning of the hut emerges as a representation of the body via architecture. Our initial viewpoint of the installation from the Hammer lobby gave us an interpretation of the black body as a primitive being, reduced to the giant, potentially threatening, and problematized nature of its construction in the west. Now, standing on the opposite side, we face a window into the interior world of the being it represents.

Hammer Projects: Simone Leigh presents us with works that are at once elegant and challenging, beautiful and dark, revealing and layered with symbolism that cogently captures the contemporary complexities of black female reality. While the black woman may still be a disrespected and unprotected figure in America, Leigh reminds us that her identity, experience, and world is certainly not to be neglected.

Alex Anderson is a Los Angeles-based artist, an MFA candidate at University of California, Los Angeles, and a former resident artist at the China Academy of Art as a Fulbright Scholar. He completed his undergraduate studies at Swarthmore College.