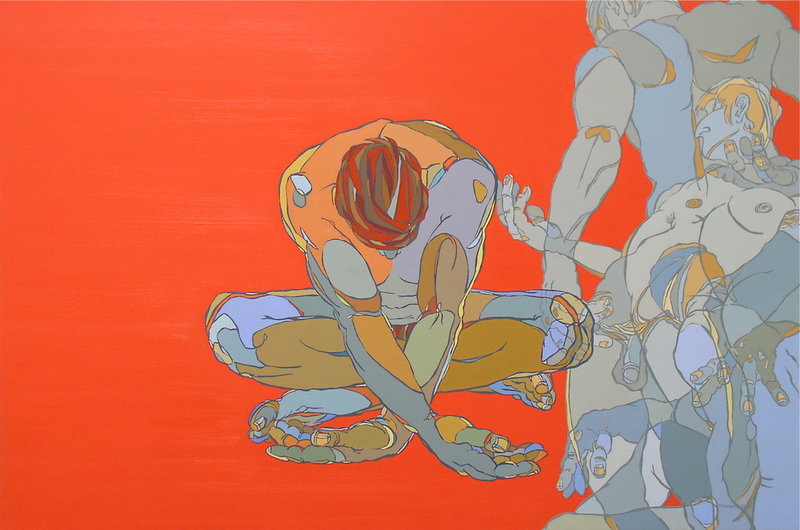 (Authors note: The following is excerpted from a story on my blog, Arteaser.com)

I first met Fernando Reyes at the Bay Printmakers Open Studios in October. Last week, I ventured out to Jingletown, in Oakland, where Reyes has a studio. I was already intrigued by his background in financial services, but learned much more about the fruits of his artistic labors.

In a family of eight struggling to make ends meet in Fresno, Fernando Reyes didn't grow up with much exposure to art. Nonetheless, by junior high his interest in art had begun to develop:

"I would draw caricatures of my brothers and sisters- those were my really first models [...] My experience with art back them was pretty minimal outside of what I was learning in [...] high school"

To earn extra money for the family, Reyes and his siblings would pick grapes in the summer. As necessity is the mother of invention, Reyes' fruit-picking labor fed his artistic inclinations:

"One of the ways I got my drawing paper was by actually getting it from farming [...] When you pick grapes for raisins you pick them, put them in a box, and then when the box was fully you would lay down this sort of craft paper sheet [...] I would see these huge packages of this large craft paper [...] so, I would just take rolls of it home with me and that's what I would use to draw"

A couple years after high school, Reyes got a job at Bank of America and two years later transferred to the North Beach branch in San Francisco. Over the next fifteen years, Reyes would advance in the bank, ultimately Senior Operations Manager:

Reyes' re-entry into art came only after his parter, Daniel, excavated the remains of his youthful endeavors:

"He saw some old drawings of mine and he saw some talent there. So, one christmas he bought me a pad of paper and drawing pencils and charcoal"

Daniel's encouragement went far beyond supplies as his own life decisions provided a model for Reyes to make a career transition. After seventeen years at Bank of America, Reyes left in 1991:

"I saw that he had quit his corporate job and decided to go back to school to pursue the career he wanted [...] I decided that really I wanted to pursue finding my career in art [... Leaving the bank] really impacted my life at the time because that meant that I am actually free now and I can actually do what I was meant to do in life"