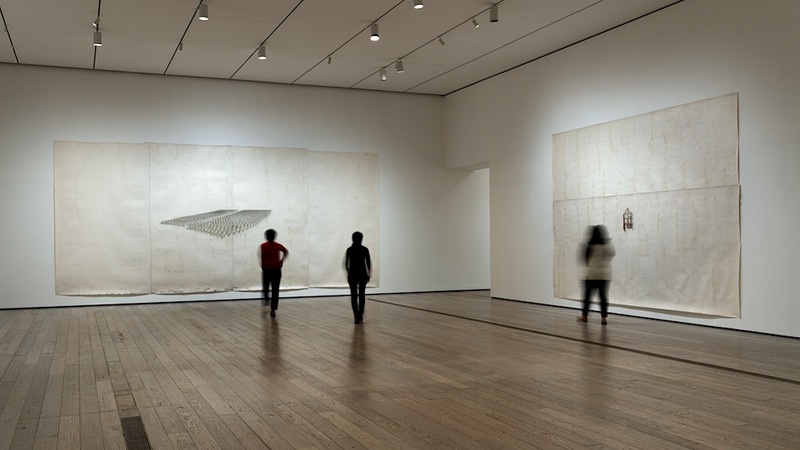 It is odd to think that minimalist Toba Khedoori’s solo exhibition, currently on display at the Los Angeles County Museum of Art, is her first major museum presentation in her adopted hometown of Los Angeles, considering that she has been a staple and original voice in the city’s art scene since the early 1990s. This long overdue survey, featuring work spanning 25 years, beautifully highlights Khedoori’s career and intricate draftsmanship. It also delves into a significant theme in her work: belonging, or the lack thereof. Just as her images reside in the no man’s land between drawing and painting, minimalism and detailed figuration, her identity is also fluid as a woman with Iraqi heritage who grew up in Australia and the United States.

Upon entering the gallery space, visitors are greeted by Khedoori’s multi-paneled works on paper from the early days in her career featuring architectural renderings with the precision of Persian miniatures and a profusion of negative space. These banal, spartan forms—fireplaces, doorways, windows—depict the home and everyday life. However, solitude and isolation pervades these works. Jerry Saltz, at the time writing for the Village Voice, once described Khedoori’s work as featuring a “Hopperesque solitude.”

While we can find evidence of human presence, such as arranged furniture, open doors, as well as Pollock-inspired bits of dust and the artist’s hair caught in the waxy surfaces, no human figures are present. The viewer is left with these disquieting, deserted spaces. With their minimal use of color and expanses of empty paper around a nucleus of pristine techinical drawing, Khedoori’s canvases appear unfinished and her subjects, decontextualized. Objects seem to float alone in blank space, further highlighting this loneliness. 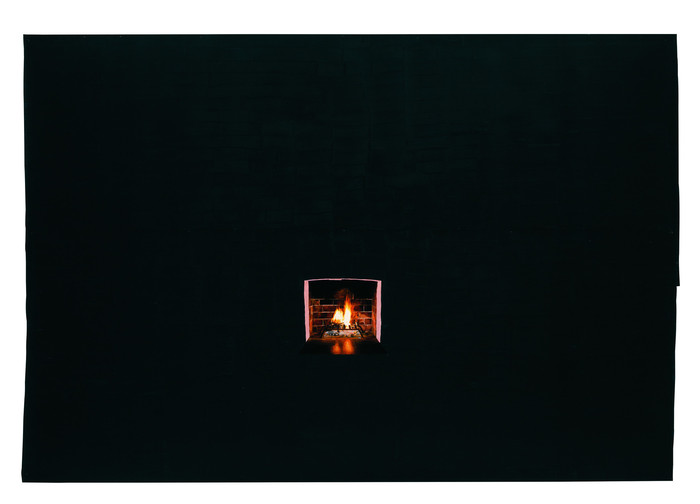 There are also masculine and feminine energies at play here. These works are enormous in scale. Most of them measure over eleven feet high, calling back to male painters in the Abstract Expressionist era who used colossal canvases. However, Khedoori’s paintings are largely on paper rather than canvas, and with their muted tones and miniature architectures they are also reminiscent of wallpaper and the domestic sphere. These notions of gender norms and loneliness are especially present in the show’s fireplace paintings, like Untitled (black fireplace), from 2006. Here we see the feminine hearth. As the heart of the home, the image should conjure up feelings of warmth, coziness, and kinship. Instead, Khedoori’s version is stark and cold. She has subverted this classic image of home and belonging into one of isolation and emptiness.

Emily Nimptsch is a freelance arts and culture writer living in Los Angeles. She has written for Flaunt, Artillery, and produced blog content for Venice Beach’s L.A. Louver Gallery.