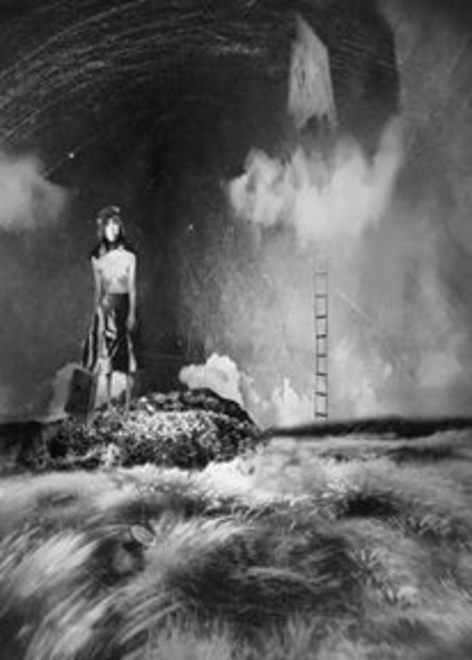 The Maui show’s 77 works run the gamut, portraying the horrors of Honouliuli and the majesty of Haleakala At top, Kathy Yoshihara’s sculpture “We Cannot Bury the Past” shows a young boy in a World War II internment camp holding masks of different emotions. The piece, which was inspired by Honouliuli National Monument on Oahu, was named best 3-D entry.

KAHULUI &gt;&gt; To commemorate 100 years of national parks in Hawaii, the Maui Arts &amp; Cultural Center has reached yet another peak with its juried exhibition of art honoring nature and remembering history.

As might be expected, some of the 77 pieces selected for display in the Schaefer International Gallery showcase sweeping vistas of Maui’s Haleakala National Park and the fiery reds of an erupting Kilauea in Hawaii Volcanoes National Park on the Big Island. However, a surprising number of artists were inspired by heartfelt nostalgia — a reminder that the national parks in Hawaii have a deeply personal connection to much of the population.

“There are a lot of special moments in this exhibition that reflect on things you might never think about, thanks to the artists,” said gallery director Neida Bangerter.

And so you have Wilma Nakamura’s childhood memories of growing up in the shadow of a volcano, Judy Bisgard’s wistful ode to her father’s favorite place in Haleakala, and Bruna Stude’s evocative series of black-and-white photographs of native ferns found while hiking along the trails.

The exhibit, which runs through Nov. 6, was four years in the making. Bangerter remembers when representatives of Haleakala National Park approached her in 2012 about collaborating on an exhibit for the centennial. Fully aware the national parks of Hawaii attract millions of visitors annually — 1.2 million to Haleakala alone in 2015 — as well as residents, Bangerter decided to open up the competition to all of America, the first time the Schaefer Gallery has done so. The only requisite: The art must focus on one of the nine national park units in the islands.

As a result, there were nearly 400 entries for jurors Nalani Kanaka‘ole and Jay Jensen to consider. Kanaka‘ole is an artist, kumu hula and cultural consultant from Hawaii island, while Jensen is curator of contemporary art at the Honolulu Museum of Art.

WHEN California sculptor Kathy Yoshihara learned about the exhibit, her mind immediately traveled to Honouliuli National Monument on Oahu, where Americans of Japanese ancestry were among those wrongly interned during World War II. For Yoshihara, that painful part of American history still lives inside her: Her father was interned at Heart Mountain in Wyoming, and her husband’s family had been detained at Manzanar in California.

Yoshihara’s small sculpture “We Cannot Bury the Past” centers on a young boy in a camp holding masks of different emotions. Beneath him the words “silence,” “shame” and “anger” are entwined in barbed wire. So powerful was this piece that it was named best 3-D entry by the jurors.

Although not yet open to the public, the story of Honouliuli resonated with three other artists who focused on the injustice of internment.

Jonathan Yukio Clark, raised on Maui and now living in New York, created “Ahinahina in the Mist” while reminiscing about the many visits his family made to the summit of Haleakala, often driving upward through a sea of clouds. To capture this memory, Clark produced delicate woodblock prints of fleeting images from the mountain that he transferred to long strips of raw white silk that hang from the gallery’s ceiling.

“You never knew if you were going to emerge from the cloud or if it would be misty the entire way,” said Clark. “I remember it as being so serene, so quiet. The whiteness of the mist makes you forget about the rest of the world, and even the rest of the island melts away. Things just kind of peek through the clouds.”

He was awarded the prize for best installation.

Lahaina ceramicist Mary Ann Leigh brought nene to the exhibit, but not in the usual way. Rather than cast Jonathan Yukio Clark produced delicate woodblock prints of fleeting images from Haleakala that he transferred to long strips of raw white silk that hang from the gallery’s ceiling. He was awarded the prize for best installation. clay duplicates of the enigmatic geese, she wanted their distinctive characteristics to define them.

“What are the essential details and what are not?” asked Leigh, standing in front of her flock. “When they exude their personal traits, you don’t need physical realities.”

In Leigh’s nene, head and feet are not essential, but attitude, posture and curiosity are. After a few minutes what appears to be a collection of pretty vessels in various poses transforms into a family of nene: a father on guard against a predator, a mother protecting her offspring and three inquisitive youngsters.

The whimsical grouping was the $1,500 Jurors Choice winner, which had Leigh bouncing off the walls — and with good reason. Except for a single ceramics class in college, Leigh did not begin her pottery career until 2002 when she was 60 years old and saw an ad for an adult ceramics class.

“I’m the Grandma Moses of pottery,” she said with a laugh. “And I feel like I’m just getting going.”

THE NATIONAL parks are not all endearing nene and quiet mist. There are controversies and concerns about development in places that many consider sacred.

Maui photographer Bryan Berkowitz got a close-up of the clash over the newest telescope atop Haleakala, showing police sawing off a piece of PVC pipe that protesters used to link themselves together last year. Hawaii island photographer Ed Goldstein had another warning: a trail in Volcanoes National Park was superimposed with the name “WalMart” in the middle.

The original Hawaii National Park that was established in 1916 included areas that later became Haleakala and Volcanoes national parks. Those two parks are represented the most in the exhibit, and artists from those two islands dominate, with 30 from Maui and 14 from Hawaii island. They are joined by 12 from Oahu, two from Kauai and 18 from other states.

Bangerter worked closely with Polly Angelakis, chief of interpretation at Haleakala National Park, in planning the exhibit. Angelakis also arranged for materials from the Haleakala archives to be displayed alongside the fine art.

Another favorite of the jurors — and the public — was Wilma Nakamura’s sentimental journey back to 1959.

Nakamura was 12 years old and growing up in Mountain View when Kilauea Iki began erupting and continued for five weeks, the fountain of lava sometimes shooting 1,900 feet in the air with hundreds of earthquakes a day.

“My perspective on life changed,” said Nakamura, who now lives in Keokea, Maui. “Pele was so sobering. We just lived with Pele, no one questioned her, she was just there. The ground we were standing on was created by Pele, and the ground could be taken away by Pele.”

Her mixed-media installation, “Gesture Tinged With Awe,” consists of 100 handmade postcards from her own photographs that are mounted, like a storyboard, on wooden ledges. The back of each postcard — complete with a copy of a 7-cent stamp and 1959 postmark — holds a message from Nakamura, each one a memory that helped shape the woman she would become.

The public is encouraged to interact with Nakamura’s piece by picking up the postcards and reading them. Those vignettes from her young life become the art.

Nakamura’s work underlines the overall theme of the exhibit: While Hawaii’s national parks might have been established to preserve nature and history, it’s their relationship with the public that makes them special.

Posted by dianajp on 9/5/16
RELATED ARTICLES
COMMENTS (0)
ArtSlant has shutdown. The website is currently running in a view-only mode to allow archiving of the content.