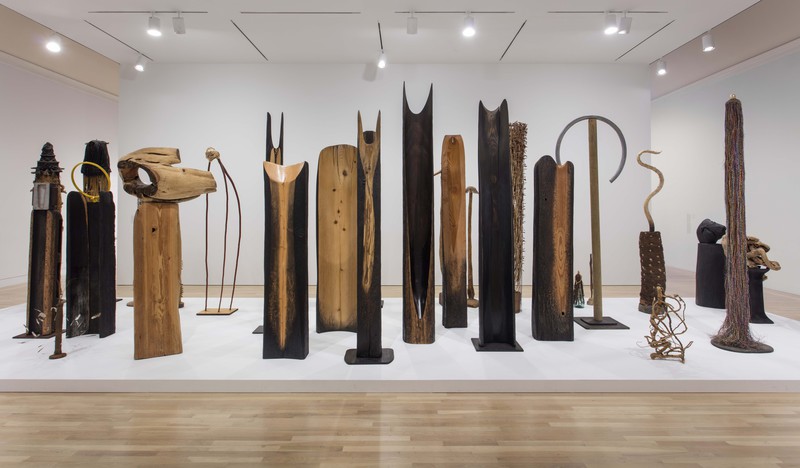 We Had the Experience But Missed the Meaning

Titled by minimalist poet and writer, Aram Saroyan, as his contribution to the exhibition, the title gives a clear idea of the exhibition content.  Words and ideas form the theme, to the detriment of visual experience.  The sad part about this is that there is little attempt to make the ideas visual.  The viewer faces rooms filled with not-very-interesting ideas and not-very-interesting reading, even to the inclusion of paintings of internet pages.

There are visual artists included; Kenzi Shiokava made a room filled with carved wooden totems and boxes with (some found) objects stacked against a wall.  And Rafa Esparza's floor covered with adobe bricks was material, but one had to read about it to understand his point.  The most elegant sculpture/installation/performance connects with the viewer on multiple levels without the need to fully explain the meaning.

Arthur Jafa's 200 binders filled with his image-notations on black culture were too copious and stiff inside cases covered in glass, neither accessible nor rich in the way of his actual work, his film.  Artist as collector: other artists, such as Gala Portas-Kim, made work about the museum and its notation.  Working with uncatalogued museum artifacts, she created her own system of cataloguing, not very exciting, visually, intellectually, or emotionally.  Just very OCD.  Don't get me wrong – OCD artists can be terrific – look at Yayoi Kusama, whose work is overwhelming and emotionally resonant.  Or Jennifer Moon, the queen of OCD and winner of last year's Made in LA 2014 Public Recognition award.  Both these artists grab you with their dives inside themselves and how incredibly personal and touching this is.

Dena Yago's window-encased, not fully visible words did successfully combine words and visuals.  Her black rubber letters tumbled and twisted around each other so that you could make out the words, even through the frosty windows.  There was a freedom in using the words and letters as both objects and carriers of meaning.

Laida Lertxundi had an interesting idea, which was to build and rebuild her wooden sculptural installation using the same materials throughout the duration of the exhibition.  But unfortunately, the day I was there, all one saw were three base pieces of little visual content.

Part of this exhibition consisted of film and performance, such as a full catalogue of labor activist video archives – really???  Who is going to go to a museum to see that?  Todd Gray wore Ray Manzarak's clothes for a year.  Year-long performances can be powerful and moving, such as Tehching Hsieh's living outdoors on the streets of New York for a year, or being tied with a 6' rope to performance artist Linda Montano for a year.  These ideas immediately bring up strong images of what this experience would be like.  But wearing someone else's clothes for a year, even if he was a famous guy?  Not so much.  Plus, again, not so visually compelling.

The problem with this exhibition lies less with the artists than with the curators.  Most of these artists, shown within another context, or with different curatorial support, could be more colorful, more accessible.  Little attention was paid to place or space, and with the layout of this building, going inside to outside and back again, that is a shame.  Work was mostly installed in the rooms as in cubicles, with only two works outside.  Within the context created here, there was minimal impetus toward curiosity and exploration for the viewer.  Look at the recent storefront: Public Fiction: The Poet and The Critic at MOCA to see ways of designing an exhibition using words which is also of interest visually.  http://www.moca.org/exhibition/storefront-public-fiction

Apparently Lertxundi made a film called We Had the Experience But Missed the Meaning; not only is that a great film title, but would be a great subtitle for this show.  Comparing the 2016 Made in LA to the 2014 Made in LA, I am sorry to say, (even as a faithful Angeleno) send 2016 back to the drawing board.  I did not even feel interested enough to vote for the Public Recognition Award, which is a great idea.  And please tell me that this was not the best LA has to offer.

Posted by Susan Chorpenning on 8/7/16
Tags: Made in LA 2016
RELATED ARTICLES
COMMENTS (0)
ArtSlant has shutdown. The website is currently running in a view-only mode to allow archiving of the content.