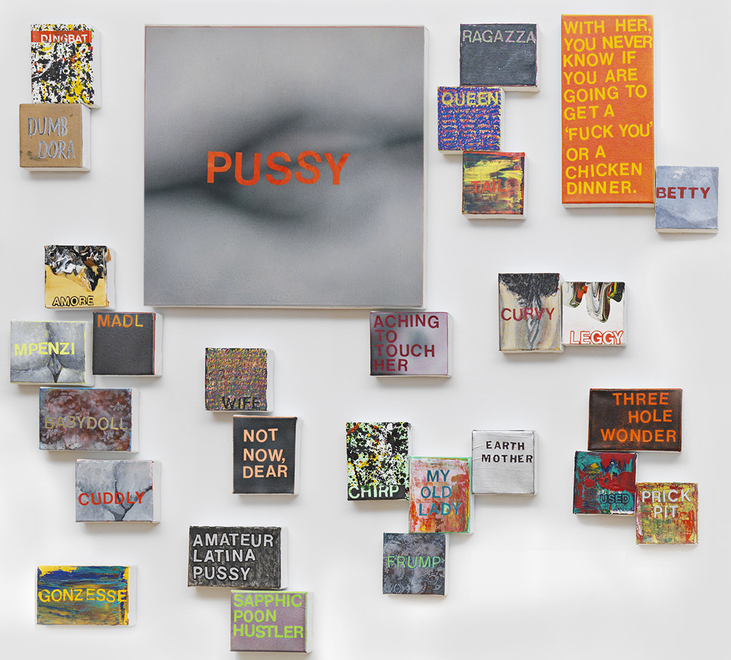 The media floods us with words and images aimed to categorize women. In Betty Tompkins’ new Los Angeles exhibition Sex Works / WOMEN Words, Phrases and Stories, the artist best known for her Fuck Paintings repaints some of these common labels, creating a feminist space for her pieces to expose and confront everyday sexist language and representations.

On the walls of GAVLAK Gallery, 1,000 small textual paintings hang salon-style, presented as a cohesive installation. Their texts are derived from responses Tompkins got in an email thread asking users to generally describe women. The most common answers people gave were: “mother,” “slut,” “bitch,” and “cunt.” She used these one-word phrases and interlaced them among longer degrading messages like, “Will she ever shut up?” and “Put a bag over her head and fuck her for old glory.” Colorful and abstract, the paintings dialogue with one another, as a whole bombarding the viewer with a stream of words that range from hateful to empowering. 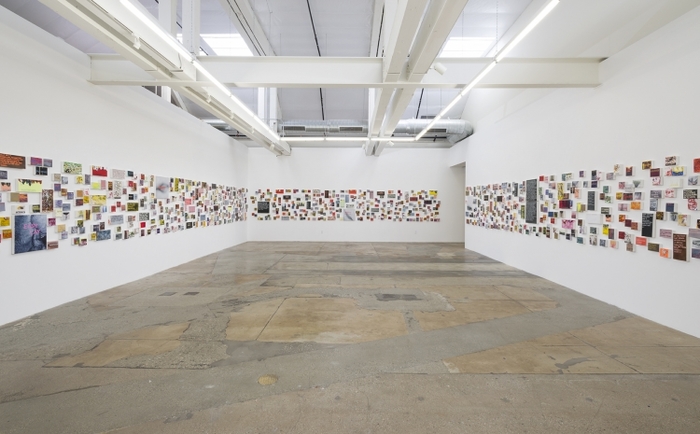 The texts are stenciled, drawn freehand, and collaged, derived from the aesthetics of the male gaze. The backgrounds of many of these tiny paintings mimic the styles of “old-boy painters” such as Jackson Pollock and Willem de Kooning. In classical paintings, the female body has often been depicted as part of a landscape, or perhaps more flatteringly, as the muse for a man to create art. So it is fitting, if not subversive, that Tompkins repurposed male artists’ work as a backdrop for her own. In other text paintings, Tompkins incorporates close-ups of the female body, drawn from her own provocative oeuvre.

WOMEN Words, Phrases, and Stories debuted at FLAG Art Foundation in New York City earlier this year, but in her first Los Angeles solo, they are uniquely exhibited together with several of Tompkins’ famous Fuck Paintings, the hyperrealistic pornographic works she began in 1969 and still makes today. Canvas has a way of distancing the feminine form from the flesh, especially with the sexually graphic imagery of the Fuck Paintings, which photorealistically transform close-ups of genitals into works of art. She said she came up with the idea for the series when looking through her husband’s porn stash. “I thought: If you take away all this uninteresting part, and just get down to the money shot, this is formally beautiful,” she said in a recent interview. The paintings veil a soft focus over the explicit images, abstracting and rendering the male-dominated gaze feminine. From afar, it takes a moment to realize what you’re looking at.

Tompkins did not initially receive much acclaim for these works, and it is only in the last two decades that they have been widely exhibited, praised, and acquired by museums. She has spoken about the male-dominated art world, inundated with established, older artists; when she first produced these works, no galleries would show her. Her paintings have been banned in both France and Japan, and even more recently, she had some of her works removed from Instagram and Twitter. 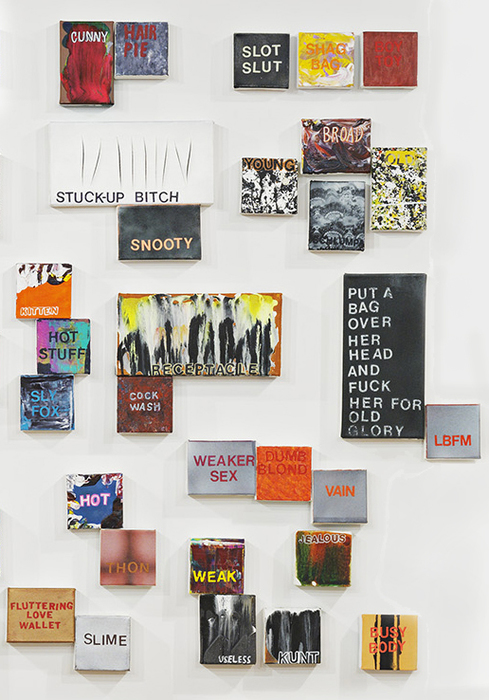 Sex Works / WOMEN Words, Phrases and Stories pieces together Tompkins’ work dating from the early 1970s to 2015, including part of her Cunt Paintings series and some early works on paper. The body of work can be read like a chronology of the evolving feminist art movement, beginning with the more jolting pornographic artworks which were undeniably ahead of their time, to the recent series, a reflection on the representation of women in the internet age. Still, the works give much space for interpretation, presenting the art without comment. No press release or interview Tompkins has given fully explicate what the works “mean” precisely, which is refreshing in a contemporary art world that tends to over-contextualize. Instead, they are the context, an ever-daring visualization of the evolving structures mediating the representation of women. The explicit images and words—the former wrested back from the male gaze, the latter a testament to what no internet-using woman can escape—provoke viewers to confront them on their own terms, with guidance from one of the most dauntless feminist voices making artwork today.

Sola Agustsson is a writer based in New York. She studied at UC Berkeley and has contributed to Bullett, Flaunt, The Huffington Post, Alternet, Artlog, Konch, and Whitewall Magazine.

Under the Radar: Super Pop Boy | Leonard Zinovyev | Taco Eisma
1/10/19
COMMENTS (1)
fuck paintings
It may well be an interesting comment on the status of women in the arts, but I'm not sure that it only serves the purpose of bringing up another subject that is evasive, that of violence and pornography as it applies to everyday life. We seem to be heading more and more into a world where these two mix as entertainment. If the purpose of these works are to point this out the success of them may only lay within the bounderies of the gallery? The rest of the Western world uses women as a source of provocative entertainment. I beleive it may be a condition that is so ingrained in our view of women as to add more to the lexicon only belies it's ability to be effective. The real source of any of this is Capitalism itself. It's ability to deplete everything that comes along that is contradictory. I think the works are a start of a very interesting discussion even though these works have a long history
Comment by: Frank Lopez-Motnyk on Friday 07/29/16 at 4:39 AM
ArtSlant has shutdown. The website is currently running in a view-only mode to allow archiving of the content.