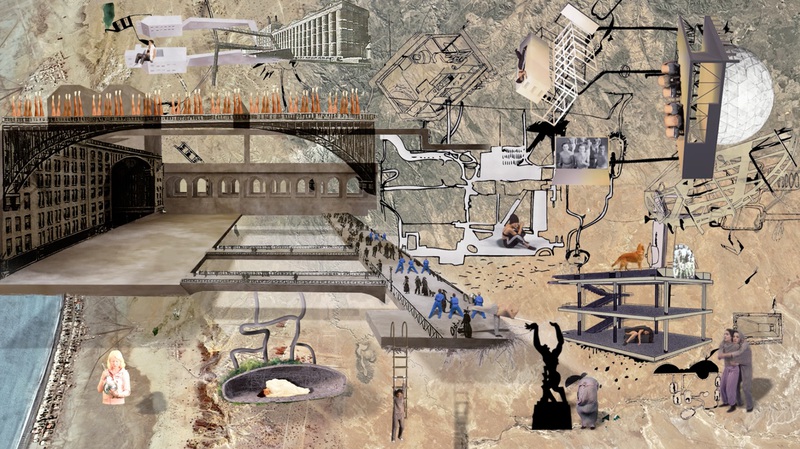 İnci Eviner in Retrospective: “There Is No Woman, Only Symbols, Images, and Representations”

Only in silence the word,
only in dark the light,
only in dying life:
bright the hawk’s flight on the empty sky.
—The Creation of Ea

İnci Eviner is a gatherer: she collects the memory of crowds, unearths folk narratives, and retells their stories in her own language. She is a hunter: she traces misogyny, detects hierarchy, and targets it with the tools of a unique feminist visual lexicon. Although she doesn’t specifically identify her work as feminist, Eviner dissolves dichotomies and prescribed identities using the female body—but just as often, ungendered bodies—as an agent through which womanhood, gender, and the politics of identity are performed.

To understand Eviner’s art, which spans nearly every conceivable medium, one needs to break the mindset of a western linear understanding. The tales in her works mushroom in different terrains, hatching into a rhizome. As in Deleuze and Guattari’s model of the rhizome, which opposes a hierarchical, tree-like model of culture and thought, Eviner’s work rejects a continuous, unbroken, orthodox perception of the world. Unlike the tree that sprouts from a single seed, branching out from a stable trunk, the rhizome is a root-like organism that spreads and grows horizontally, making diverse, but not necessarily continuous connections and appearances. 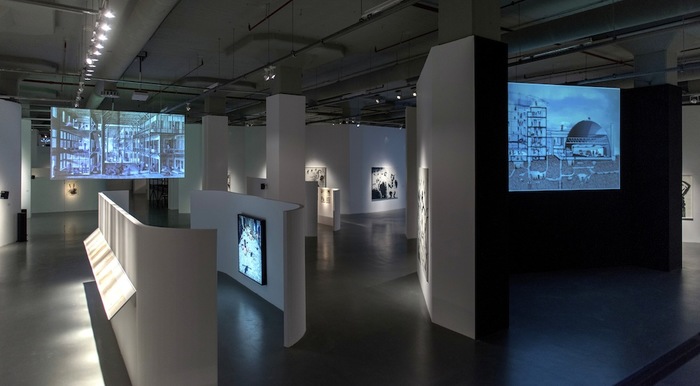 Who’s Inside You is the first retrospective of a living female artist at the Istanbul Museum of Modern Art. Curated by museum Director Levent Çalıkoğlu, Eviner’s much deserved exhibition reflects this rhizomatic structure. The artist’s wide-ranging methodologies and materials are dispersed across the space, non-chronologically. Connected through their inherent melodies and thematic refrains, the works call back to one another, as if the whole exhibition were one giant installation. At a press conference, Eviner spoke of how it all came together:

This exhibition enabled me to look back. Not only did it give me the opportunity to look from a certain distance at my own story in terms of how my identity as an artist became established, but it also revealed how all of the works are linked in certain ways. I designed the presentation in an entirely open-plan setting. I wanted to create a dynamic environment that would not be presented chronologically, but would bring back into circulation visual languages that reference one another, speak to one another, and are informed by the same past although they were articulated in different ways at different times. 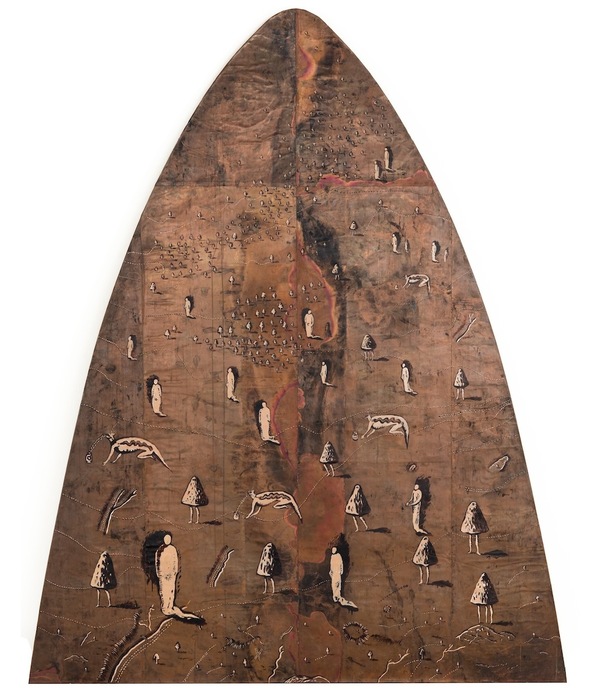 Body Geography (1995), is emblematic of Eviner’s approach to material, medium, and body. A plate covered with copper, acrylic, and asphalt, speaks in a primeval language, telling the stories of bodies traversing an unspecified terrain. The artist’s relationship with the rhizome is already visible in this early work. Bodies are plotted around the composition, connected to one another via dotted lines, journeys charted on a map that start, stop, trail in and out of the frame, connecting and disconnecting. In this geography of an unknown land, some figures wear cone-shaped dresses; others have no legs, but rather a single appendage tailing off on the ground. Charted like symbols on a map, these mysterious, ungendered figures nevertheless possess character: they wander around contemplating, observing, looking warily at the lizard-like animals sharing their space.

The uncanny topography in Body Geography echoes the artist’s identity as a woman in Turkey, trapped between nationalist and modernist narratives of the state and the conservative values of the society. Women in Turkey were once seen and advanced as the modern face of the revolution and westernization—throwing away their headscarves, offered a decent education, and enjoying the right to vote. However, they were still expected to preserve moral values like not having love affairs or sex before marriage. Eviner’s bodies are tasked with navigating this vague, unreconciled territory, reflecting and playing upon the intersection of art and feminist discourse. 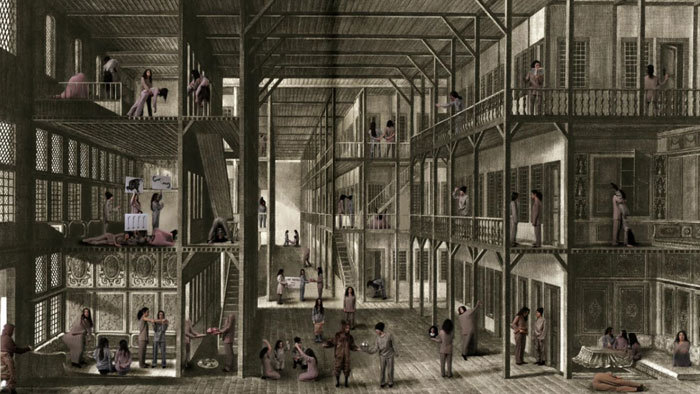 A centerpiece of the show is Harem (2009), a video projected on a giant screen in the middle of the exhibition space, which takes on western perceptions of the East and the representation of women. In the work, Eviner deconstructs Antoine Ignace Melling's eponymous engraving which dates back to 1795. Revealing the original engraving’s perspectival flaws, she also underlines the faults in the figures’ bodies—possibly the result of lack of observation. She accentuates the artificial production of the orientalist imagery and the fantasy world of the West by simply erasing Melling’s fabricated figures—and then introducing her own instead.

The artist says that she sees architectural space as an extension of the body, and she examines space as pregnant with codes full of memory. Thus, by playing with our recognition of space, she tampers with our perception of memory. In doing so, she also addresses her own education as an artist, and the history and systematized knowledge embodied therein. As a graduate of the Istanbul State Academy of Fine Arts (now known as the Mimar Sinan Fine Arts University), famous for its formal western-oriented orthodox art education, she tries to deconstruct her knowledge of perspective, and reverse it with her video. The women Eviner introduces in Melling’s reclaimed space manifest her political viewpoint as well. With their acts—biting and stabbing one another, hugging the dead—they constantly challenge accepted moral values, violence, and death in an uncanny setting. 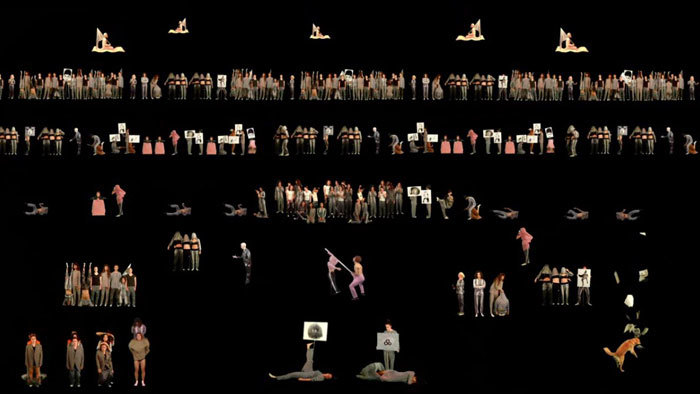 Eviner uses the images of women’s bodies, particularly from found images and photographs. Appropriating the collective, media-centric image of women, mostly produced by a hetero-normative mindset, Eviner turns these images into the “representation of the representation.” Referencing Lacan, she underscores that “there is no woman, only symbols, images, and representations.” Broken Manifestos (2010) addresses rituals and mythical narratives, with figures in dozens of small vignettes charted across a pitch-black abyss. The nebulous connections between immigration, violence, compassion, love, and sexual desire manifest in the video through the bodily gestures of the figures. One scene speaks to global protest movements, telling the stories of people who assert their rights on the streets. People waving flags and throwing stones blend into images of stray dogs; a hip-hop tune plays in the background. 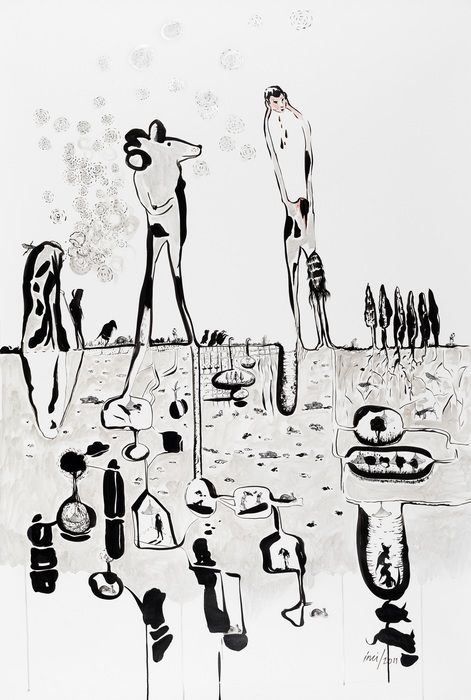 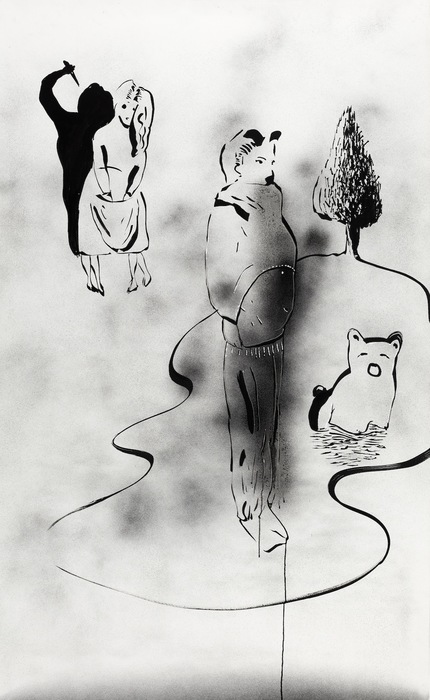 Eviner’s drawings employ an equally rich spectrum of images and figures. In fact, the artist considers drawing as the starting point of her practice. In works like Baby Woman (2005), Defiance (2005), Arthur Rimbaud (2005), and Beuys Underground (2011) womanhood, and images of women—extracted from her own experience or from the stories and images of dancers, actors, her students, and even found photographs—remain central in her boundless image production. Gender, as well as nationhood and identity, is characterized as being in a state of flux: women turn into children, men flow into animal-like beings. In the end, nothing is definite.

It is fitting that Istanbul Modern's first retrospective of a living female artist goes to one so concerned with mapping, diagramming, retelling, and complicating formal histories and identities. It is not simply Eviner’s practice which expands rhizomatically, but her influence as well. Here’s to hoping that this crucial milestone will be followed by retrospectives of other key women in the history of art in Turkey like Hale Tenger, Nil Yalter, and Tomur Atagök, not to mention greater representation for a new generation artists like Canan, Neriman Polat, Fulya Çetin, Arzu Yayıntaş, Seda Hepsev, among so many others.