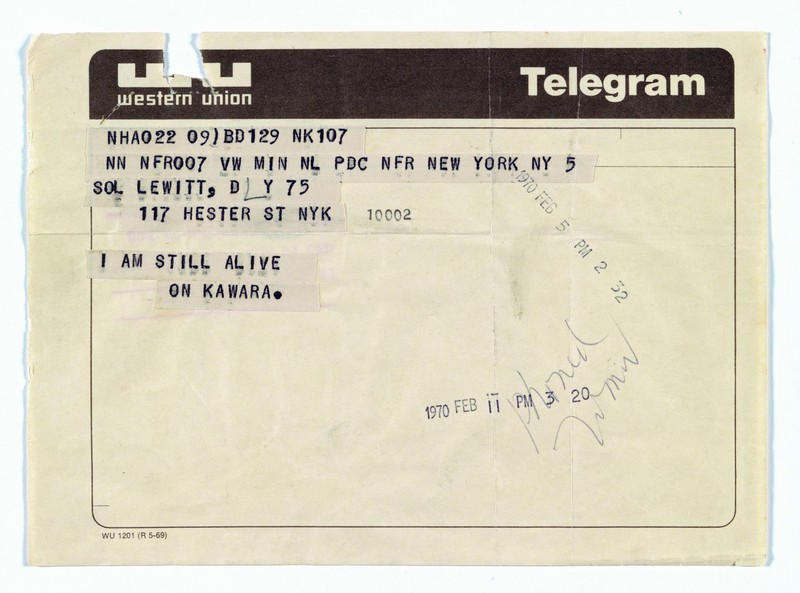 Taste With the Body and Without

Don’t misunderstand me: People are stupid in the ways that I am stupid. We are stupid in common: over-worked, over-tired, over-extended—distracted by 21st century life's whizzing communications, the decentralized self, and efforts to keep the barricades from being completely overrun by life’s ghoulish troubles. This being so, we possess precious little attention left to really know what someone's talking about who is actually sitting across the table from us or who just emailed us that text I/they want you/me to read or visit that exhibition we/they labored over. I bet even as you read this you've got a couple of texts messages and/or emails that are burning in your mental inbox. Maybe it's word back from the grant proposal you wrote five months ago, maybe it's someone you thought would never write you back (but maybe they did!).

We are stupid because we are lonely and estranged. It's nothing personal, dear friend seated across from me. But of course that's just the problem: it is personal—intensely so. It’s personal and human. There is just no way I could ever really tell you how fucked my interior world is right now. Or: I could, but the terror of real-time rejection—the "no one cares about your problems" tough love reply—sends us scurrying back into our technological hole in the ground.

So we are stupid and it may very well be the case that we are stupid because our gizmos are hooking into our loneliness, self-doubt, and exploiting our rampant fears of rejection. Oh to be so Holy that we felt God or the spirits swirling in and around us so much that we did not crave that type of connection. But this spiritual longing otherwise subtle in previous generations may have taken its crude form today in flat screens, digital circuits, and the like. Still, I don't want to lodge yet another harangue against the internet and technology... How can I while typing this out on one of those gizmos, when I am myself a shameless scroller and poster to the much hated Facebook?

Instead, I'd like to ask what our shared stupor might mean for notions of taste. Given the choice between digital delirium and the chance to be a kind of Hume-ian/Kantian person of taste...I am pretty sure I'd elect for the former. Most of us have, because those Enlightenment era philosophers are, well, pretty embarrassing in many respects. Even if you grant Immanuel Kant's project its desire to create an aesthetic commons some modicum of cultural edification, it’s difficult to get past some of his notions of universality, beauty, disinterestedness, and pleasure. Pierre Bourdieu, while obviously useful for identifying some of the key problems of class structure in the field of cultural production, kind of leaves us a little cold and alienated. I mean, we do share interests after all. Cultural life turns out to be more than can be explained by a sociologist’s charts and graphs. I find that Carl Wilson's Let's Talk About Love is pretty instructive in breaking down the theoretical and aesthetic implications of taste. Wilson makes some penetrating insights into the phenomena of “cool,” which he describes as striking a fine balance between economic capital (money), social capital (connections), and cultural capital (knowledge). Still, even in Wilson's thinking, taste tends to be in conversation with something like power relations that are grounded in aesthetics.

Giorgio Agamben’s thoughts on the subject of taste open new paths for thinking about what taste could mean without “taste-making”—how it could be a zone for thinking about what makes us human. After describing a series of entries in a newspaper's personal ads, where people seek other people through brief descriptions about their hobbies and tastes, Agamben writes:

In the attempt to deﬁne oneself through one’s hobbies, there comes to light in all its problematicity the relation between singularity, its tastes, and its inclinations. The most idiosyncratic aspect of everyone, their tastes, the fact that they like coffee granita, the sea at summertime, this certain shape of lips, this certain smell, but also the paintings of the late Titian so much—all this seems to safeguard its secret in the most impenetrable and insigniﬁcant way. It is necessary to decisively subtract tastes from the aesthetic dimension and rediscover their ontological char­acter, in order to ﬁnd in them something like a new ethical territory. It is not a matter of attributes or properties of a subject who judges but of the mode in which each person, in losing himself as subject, constitutes-himself as form-of-life. The secret of taste is what form-of-life must solve, has always already solved and displayed—just as gestures betray and, at the same time, absolve character.  (Agamben, "Toward an Ontology of Style," The Use of Bodies, 231)

As I understand it, Agamben is saying that taste marks our individuality. In a sense, like our quirky habits, what we are attracted to reveals something about who we are as human beings. Obvious enough, you say, but to think about taste as a way of accounting for humanity instead of locking us into a cultural hierarchy runs counter to notions of taste-making and returns taste back to its almost animal nature. We might even think of his formulation of taste as a practice of popular distinction. By popular distinction I only mean the ability to recognize particularity without resorting to social climbing of ladders. Rather than taste being about judgment, Agamben’s embodied formulation of taste could lead to the discovery of particularity and that type of discovery might prompt something like a connection that could withstand the onslaught of distraction I ruminated on earlier.

Let's talk about an alternative space in Chicago. Lets talk about the art of Rebecca Beachy and her project Inherencies at New Capital last fall. It was a show that actually left a bad taste in my mouth. Which might sound like a criticism but it's not.

On first viewing I didn't “like” the exhibition—or to be honest, it bummed me out. The artist had an assortment of animal bones in various material states—boiled and semi-raw, configured like so many decrepit minimalist sculptures. Think Donald Judd in the bone-yard. The show also had an artist-built subterranean level which you could enter through a hole that had been cut in the floor. Underground there were standing pools of water, dimly lit alters with animal bones... the whole show had a sephlucar vibe; invoking: death, rot, and the bodily. Mourning.

It was not an easy show. But more than most, it was art that I had to contend with and ask myself: why did this trouble me so? And what did it mean that it left such a bad taste in my mouth? These were questions that nagged at me for a while and I wondered...how would I have reacted to this exhibition if it had not been installed in a marginal old warehouse building, but in a shiny museum space like the MCA Chicago... My sense was that taste and convention were skewing my reading of the work...and that my answer to my speculative "what if" was: Rebecca Beachy's exhibition was one of the most absorbing shows in Chicago last year and deeply resonant with the work of famed Colombian artist Doris Salcedo, whose work was also exhibited at the MCA last year and is likewise rooted in the bodily and funerary while dealing with political atrocities of Colombia. Salcedo's work is hard not to take seriously simply because of the authorship of the artist and the institutions that host it. 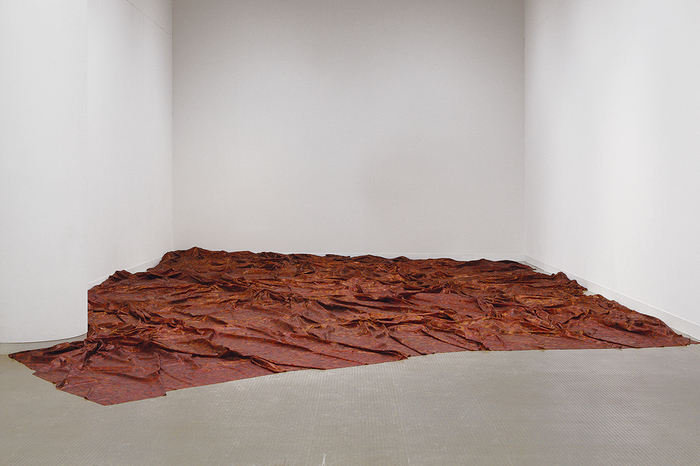 Seeing this condition from another angle, I am also reminded of On Kawara’s tour de force retrospective, Silence, at the Guggenheim in New York in early 2015. The exhibition was a revelation and allowed me to connect with the artist in a whole other way that I think very much has to do with the type of taste Agamben is describing. Until the Guggenheim exhibition I only really understood On Kawara’s work in relationship to the conceptual art canon, i.e. he was an “important” artist as portrayed in countless books, magazines, and internet articles. What I encountered in the Guggenheim was a life. This “form-of-life” (to borrow Agamben’s phrase) struck me on a visceral level. Kawara’s work is a far cry from the chilly conceptualist that I had been given to understand. Accounting for everyday, the I Am Still Alive telegrams, the hand-painted Date Paintings, and numerous other works, registered something more than the personal. In aggregate they reflected back a life. A life, moreover, that (at least for this viewer) could only begin to come into focus in this particular exhibition. Taste then might be rethought of as a phenomena that resolutely places us in the world—not as universal subjects who adjudicate culture but as particular individuals who literally have a taste for it. 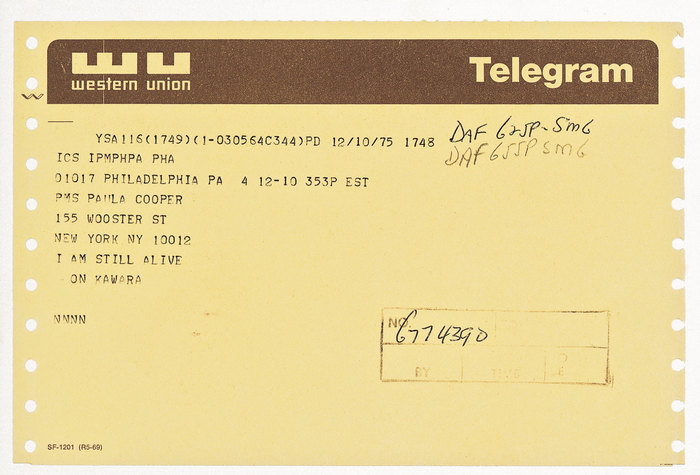 Does the internet have a taste?

Okay, so maybe a slight harangue about technology after all... Our slick gadgets and the hyper-capitalism that peddles them ad nauseam are sucking the life out of life. “Disinterested,” they are helping render embodied taste obsolete. The scary thing is—worse than death, rot, and bad taste—should we loose our sense of taste we very may well lose any real connection to each other...and while technology may offer us a kind of freaky-deaky disembodied cyborg immortality that might allow us a break from being stuck in our bodies and to float free through the global corporatized ether, we might inadvertently trade away bodily tastes altogether, both good and bad, for a life without life.

Zachary Cahill is an artist that lives and works in Chicago.

From Kitchen to Gallery, Ferran Adrià Unpacks the Tools of Creativity Ferran Adrià
6/15/16