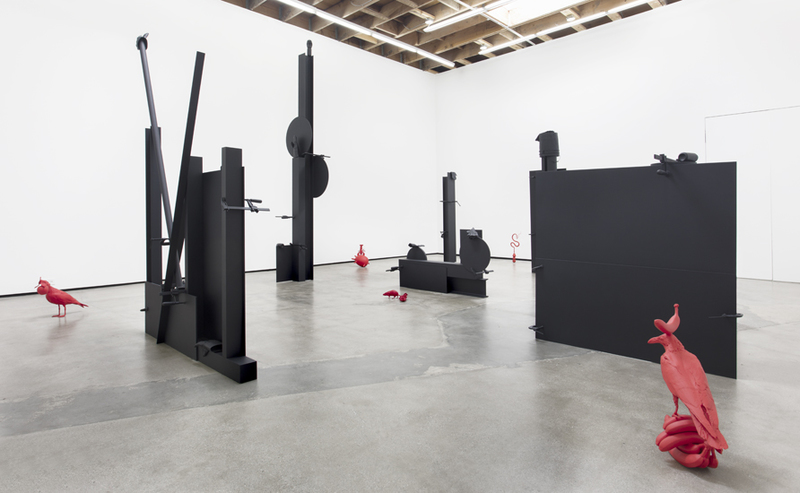 Nathan Mabry’s exhibition gripgrabstacksqueeze, at Cherry and Martin, opens with a black, partially abstract, figurative sculpture suggestive of indigenous art placed on an oil drum. The upper half of this totemic form seems to have emerged from the drum, its dark and glutinous texture reminiscent of tar. With this opening work, Mabry succinctly kicks off the show with a meditation on the fetishism of early peoples and their artifacts, as well as the loss of these cultures as a result of modern capitalism. 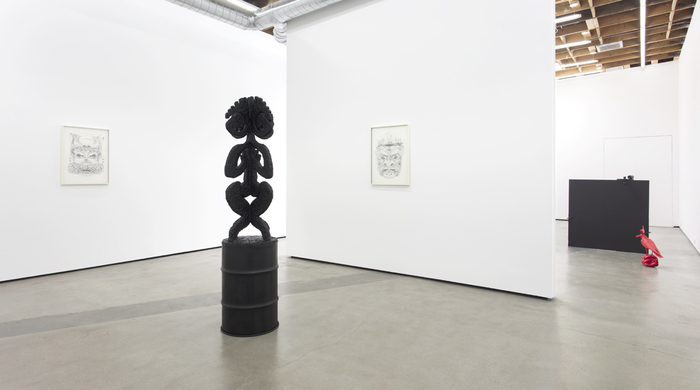 On the walls of this room are four layered drawings of Native American masks framed behind a glass panel that distorts their images. Our eyes are drawn in multiple directions, clouding the exact nature of what it is we are seeing. Upon inquiry about Mabry’s choice to use this imagery, a gallery representative simply stated that it “inspired him,” a response that suggests Mabry is equally complicit in this system of objectification he depicts in this room, despite his critique. The borderline problematic and appropriative nature of Mabry’s choice to use seemingly random tribal imagery aside, these obscured faces—Mabry calls them “apparitions”—present as spectators to the rise of the central sculptural figure, their blurriness creating the sense that they exist somewhere in memory. 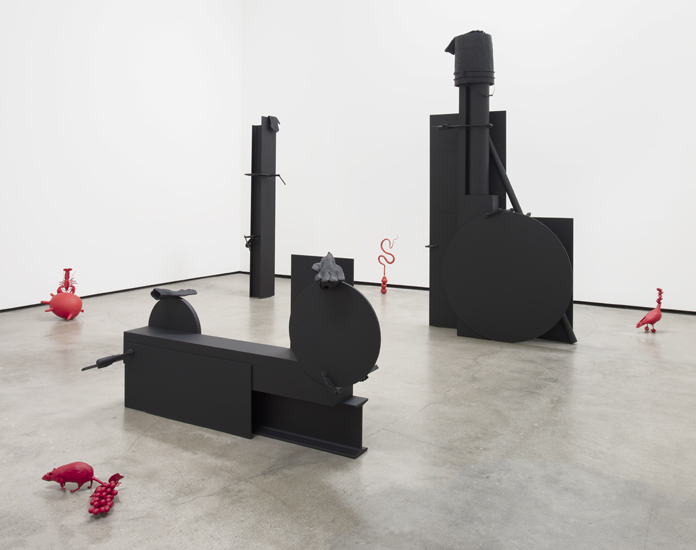 Notions of past and present become especially salient as the exhibition moves into the second room. The sticky black surface of the first sculpture is replaced by a sleek matte black in line with the modernist ideal. Here dark, cast steel sculptures with long physical silhouettes share the floor with a collection of to-scale fruit and animal forms painted red. The larger black forms, from the new series Late One Night, are adorned with various signifiers of labor; workers’ gloves, wrenches presented to seem as though they are holding the sculpture together, and empty, discarded beer cans all populate the surface of these sculptures. By coating both the architectural structures and industrial accoutrements in the same black surface, Mabry unites these austere forms and their unseen assemblers. These pieces remind us of the underlying humanity and human touch with which the manifestations of modernism are imbued despite modernism’s mission to transcend, or at least hide, the impurities of the human world. 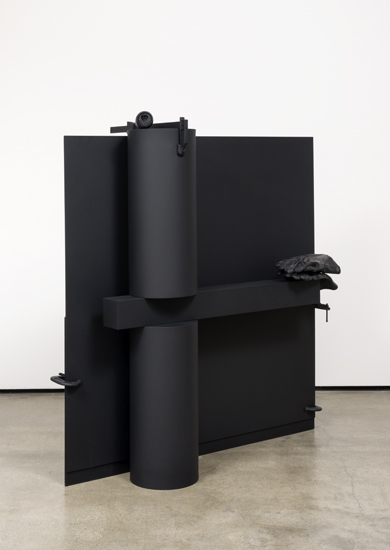 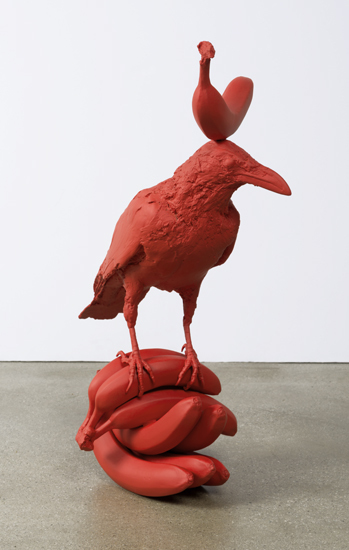 With this context in mind, we can now move to the absurd amalgams of flora, fauna, and objects crawling between the architecture at ground level, Mabry’s Low Hanging Fruit. A raven stands on a pile of bananas with another banana on its head; a snake balances on its nose on top of three stacked pears; a lobster acrobatically holds itself upright on the finger of an inflated latex glove. The chromatic vibrancy stands in direct opposition to the modernist notion that color is vulgar, barbarous, and maybe even criminal. These sculptures add a layer of complexity to the installation that allows for multiple interpretations and a satisfying prolonging of semiotic resolution.

Are we these ridiculous combinations of nature and material inhabiting the modernist architectural landscape? Is it a suggestion that modernism creates a world where material, artistic, and cultural value lies in the construction of a deviant hybridity? Is it a commentary on modernist subjugation of all things unaligned with its tenets, and the subsequent relegation of such things to the world of the strange, the savage, and the animal? Perhaps all three, but the intrigue of this work lies in that we don’t get an answer. It playfully speaks to the intangibly bizarre nature of our aesthetic world. In a society of complex social ideals derived from 20th-century thought and contradictions that transcend what we can say succinctly or clearly, Mabry’s interrogation of modernism captures that reality and gives it form beyond the capacities of language.

Alex Anderson is a Los Angeles-based artist, an MFA candidate at University of California, Los Angeles, and a former resident artist at the China Academy of Art as a Fulbright Scholar. He completed his undergraduate studies at Swarthmore College.