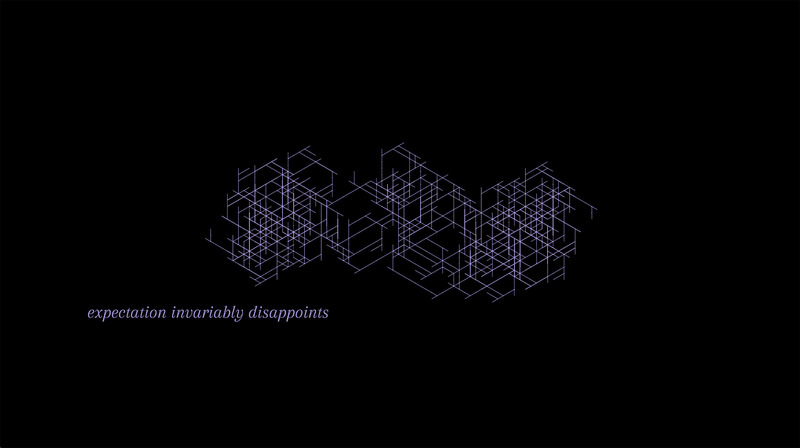 As Authentication, Currency, and Inspiration, Bitcoin Finds a Growing Share in the Art Market

It took a crisis to spark off the next revolution in technology. In 2009, a year after Lehman Brothers’ disastrous crash and its subsequent domino effect on the rest of the financial sector, the Bitcoin was launched. The concept of cryptocurrency, cashless and operating in a peer-to-peer network, had been around for some ten years but until the dawn of the New Great Depression no one had felt the need to explore it in depth. Its stability—the conversion rate has been hovering around $382 per Bitcoin for years now—is seen as a big plus in a world rife with speculation and wildly fluctuating share prices. During the first couple of years over one billion dollars were spent on Bitcoin and the technology supporting it. Its anonymity fits the needs of criminals buying and selling illegal goods on Darknet sites such as Silk Road, but many progressive organizations now accept the alternative currency as payment. Bitcoin has also penetrated the art world and is rapidly becoming a platform for artistic creativity in its own right.

Austria has been at the forefront of Bitcoin use in the art scene. Vienna is the birthplace of cointemporary.com, an online gallery selling works for Bitcoins. It started off with only two artists but by now the roster boasts nearly forty, including Beat Streuli, Klaus Schuster, and Nicolas Chardon. They consecutively post works for a period of ten days during which they can be sold. Last year, Harm van den Dorpel’s Event Listeners, a limited edition screen saver, was the first piece to be sold to an institutional buyer: the MAK Vienna became the first museum in the world to use Bitcoin to expand its collection.

Cointemporary not only uses Bitcoin as an alternative way to pay for art, but employs the technology behind it for authentication purposes as well. To “mine” Bitcoin’s so-called blockchain technology is used. A blockchain is a distributed database that contains a continuously growing list of transaction records that has a timestamp and is linked to previous transactions, making it a unique entity that cannot be reproduced. Adding a blockchain to a work of art ensures its authenticity. Especially easily multiplied digital art can be protected against unauthorized copies, maintaining the exclusivity of the work’s ownership and thus its value. With blockchain authentication, new media, long touted as an art form resistant to the art market, is faced with embracing its commodification. The startup Blockai advertises the use of blockchain registration as “100x faster and cheaper than the Library of Congress.” Similar companies catering exclusively to artists and other creatives are Monegraph and Ascribe, which is used by Cointemporary.

Bitcoin is interesting for artists because it places their work outside the traditional art market. In a way it feels like a fresh start. Because Bitcoin is abstract and doesn’t feel the same as the dollar or euro, the perception of the work is less tainted by pricing. Alex Puig, CEO of the Digital Currency Summit, calls blockchain “the internet of value” and heralds it as the conceptually radicalized successor to “the internet of things.” The impact of Bitcoin—and other cryptocurrencies for that matter—goes way beyond commercial logistics and makes us rethink the concept of worth and value production: monetary, emotional, social, and artistic. 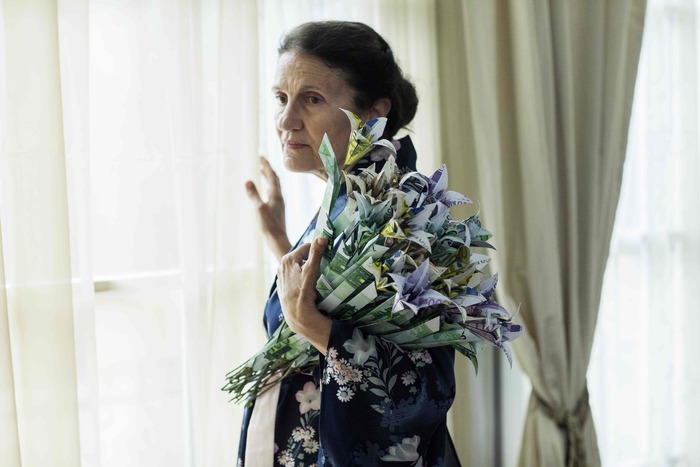 At the 55th Venice Biennale Stefanos Tsivopoulos dealt explicitly with this issue in History Zero. This work at the Greek Pavilion, which at this moment is on display at Hacking Habitat in Utrecht, comprises three films featuring an elderly collector of contemporary art, an immigrant collecting scrap metal, and an artist searching for images. Money has a different meaning for all three protagonists: a means to fuel a passion or support an ego, access to basic needs, a necessary evil. Still, in contemporary, crisis-ridden Greece these unequal worlds are tied together and homogenized through a single currency. Added to the films is a presentation of alternative currencies. Tsivopoulos suggests that resorting to non-centralized currencies might not only protect us from speculation-induced recession but also allow us to charge our monetary system with other, more humane values than mere financial. A transaction could become more personalized because the value of the currency used is based on something different than the reliability of the state propping it up. 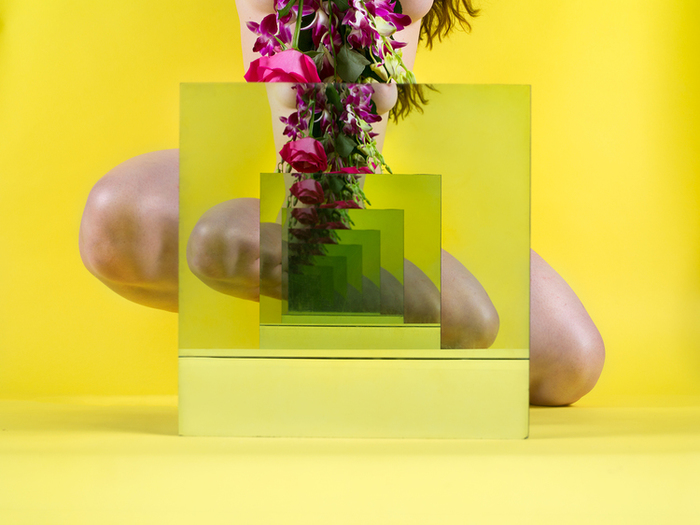 Speculation is the first image to back BitchCoin.
It is currently stored in safety deposit box #138 of HSBC, 110 William Street, NY, NY 10038

American artist Sarah Meyohas was one of the first to jump at this idea and create her own currency. She launched BitchCoin in 2015. One BitchCoin equals 25 square inches of photographic print by Meyohas. The first two hundred coins issued were backed by Speculation, an ironically titled chromogenic print in an edition of 8. In a way the artist is reinventing the gold standard, backing her currency not with precious metals but with art securely locked in a vault. Investors can “cash in” their BitchCoins in return for an artwork, but they can also trade them or hold onto them in order to later purchase another work produced to underpin a new emission of BitchCoins. What they basically do is buy into Meyohas’ future, and as such, they create a dedicated market for her work. BitchCoins represents a value close to the subjective nature of art appreciation. Unlike common currencies, which can also be used to buy boats, cars, or watches and somehow equalize art to these commodities, it is precise and specific. 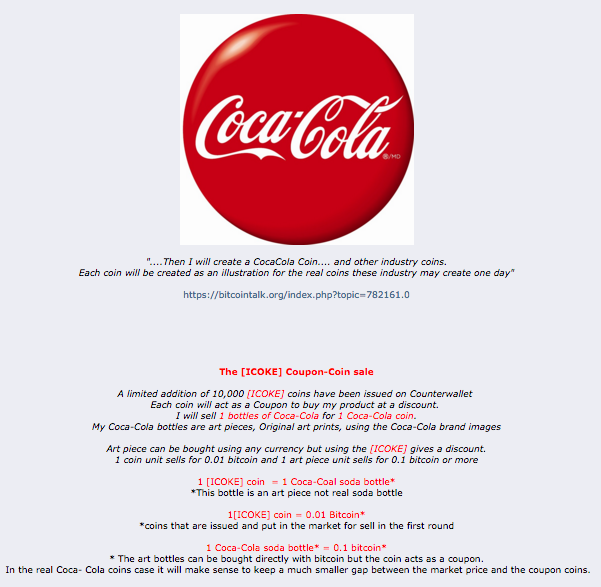 Screenshot of excerpt from Nili Lerner's [ICOKE] post on bitcointalk.org

Meyohas’ BitchCoins are still representational, though. Israeli artist Nili Lerner takes things one step further and creates coins as art works in their own right. Lerner started off as a painter, was a scenic artist for the movie industry, and since 2008 has been working on projects dealing with the concept of money, creating currency as art. For the show On the Shoulders of Giants (January 8–20, 2015, at the Bitcoin Center in New York) she issued a new batch of NILIcoins. Subversively these coins are named after multinationals worth billions of dollars. The [ICOKE] and [IDISNEY] aren’t backed by Coca-Cola or Disney, but they do refer to them and rely on the instant recognition of the cursive logo or Micky Mouse image. This sparks a lot of discussion about copyright and intellectual property in online forums, and Lerner considers these conversations as part of her work. After all, value creation is an interactive phenomenon. Lerner hasn’t been sued yet for infringement of intellectual property laws—Disney, however, posted a job advertisement for a blockchain intern only last month. Seems like big business is latching onto the idea of cryptocurrency, undoubtedly aiming to create new monopolies in an arena that is appreciated by artists for its freedom and open source attitude. It could bring the discussion about power, value, and artistic worth to a new level.

The Resistance Issue: An Introduction
2/25/16
COMMENTS (0)
ArtSlant has shutdown. The website is currently running in a view-only mode to allow archiving of the content.