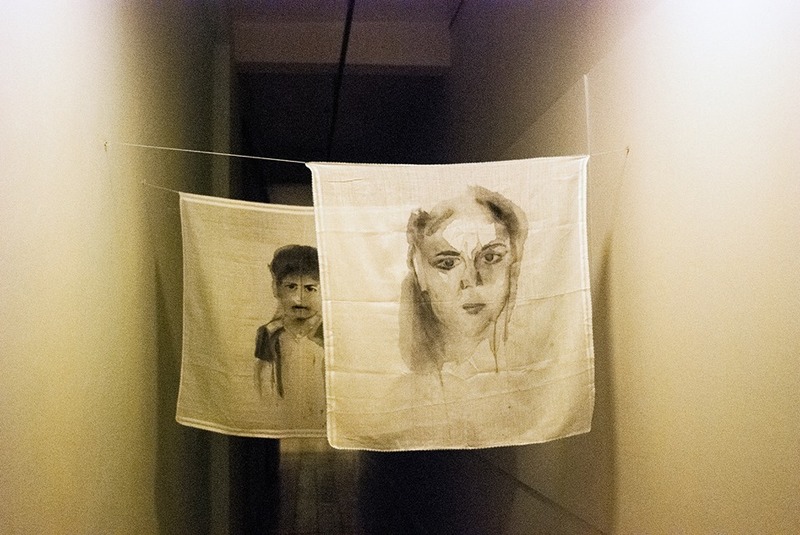 “Will women always die? Let some men die too. I killed him for my honor,” uttered Çilem Doğan, defending herself with a heartfelt statement. Arrested for murdering her abusive husband, who beat her—even while she was pregnant—and forced her into prostitution, Doğan resisted the long-term abuse one day and shot her husband with bullets originally aimed at her.

Doğan’s story isn’t unique within Turkey’s long history of violence—domestic and otherwise—though she is one of the lucky ones who survived. Newspapers are filled with people who are subject to domestic violence, sexual abuse, police brutality, and murder, including torture and abuse in institutions like jails, schools, and hospitals. Violence and pain in Turkey are becoming quotidian, and instead of addressing the causes or the social aftermath, political actors and their mouthpieces in the media claim that we should “get used to” living with terror, accept loss, and see these incidents as the will of God. The government would see us forget the dead and abused and move on to keep the economy alive. They would see us numb our senses so that we do not feel the pain, care about the other, or move a finger to help. Yet, when death is so close to us, when our loved ones and fellow citizens are taken from us by bombs, mine collapses, police beatings, or hate crimes, how and why can we forget our loss? Isn’t it simply the essence of our very existence?

In the exhibition Hidden in Loss at Karşı Sanat in Istanbul, six women artists are currently raising the politicized subjects of loss, mourning, and remembrance. Considering survival and staying alive in the utmost atmosphere of organized evil, Arzu Yayıntaş, CANAN, Evrim Kavçar, Fulya Çetin, Nalan Yırtmaç, and Neriman Polat ask: “Why can’t some deaths be mourned as real and significant losses? Why are only certain pains legitimate, only certain losses real? How is it possible that some people are ‘expendable’; they can just be killed?” They advocate for the very right to acknowledge death and the dead, to mourn, and to remember. Substituting the state, which should be the formal authority to recognize and document loss, the artists in this exhibition morph their pain and rage into a memoir of the people who have died. This memoir, however, does not play the surrogate to the official record; it only functions as a counter-monument. Believing in the transformative effect of loss, they utilize building materials, clothing, their breath, and their very bodies to ponder the things hidden in loss—not only the people gone, but how their disappearance affects physical places, nature, innocence, and the conscience of our society. How does it change those left behind? 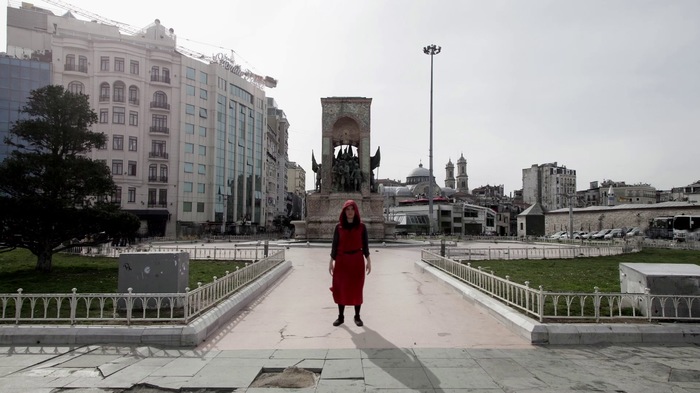 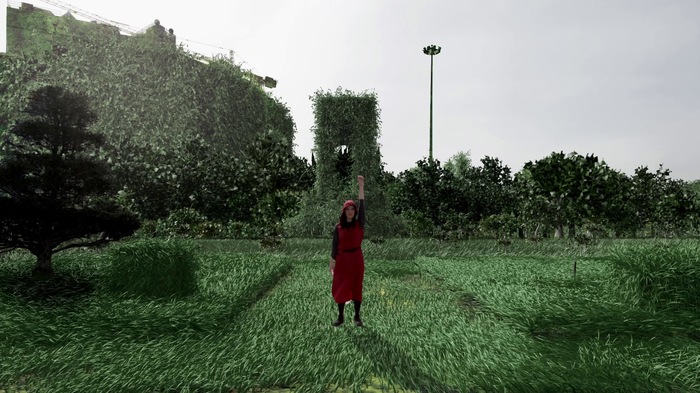 In her video work, Awakening, Arzu Yayıntaş references the Gezi Park movements. In the middle of Taksim Square, the tourist and leisure district now famous for the uprisings started in June 2013, a woman in red stands still, fist in the air. She references the famous “woman in red,” who was pepper-sprayed by police, and became the leitmotif for female protesters during days of violent anti-government demonstrations. In Awakening, almost everything around the woman is concrete, steel, and stone. Then, like nature taking over after an apocalypse, greenery begins to flourish; trees surround buildings and plants swirl around monuments; what is human-made turns into the property of Mother Nature. “This video is, in a way, a longing for remembering [these public] arenas with peace and solidarity, not with bombings and clashes,” the artist told me. 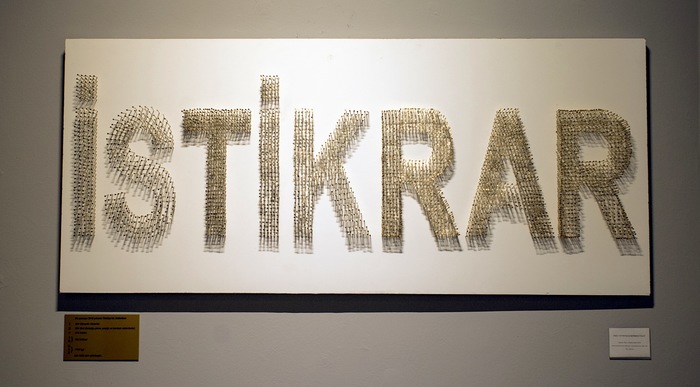 In Stable Death Yayıntaş and Neriman Polat hammered the word “iSTiKRAR” (“stability”) using nails on a white board. An adjacent text reads: “3332 nails are attached to this board for 204 security guards, 294 civilians, 414 women, 706 refugees, 1703 workers who died in 2015 in Turkey.” These violations are blanketed by government officials for economic stability, while legal amendments for protecting women’s lives are postponed to keep the stability of family values. The state of refugees trying to cross the border into Europe is used as a bargaining chip, with the government turning a blind eye to deaths each day. Workers are killed due to severe declines in safety standards, coupled with superficial inspections. Stable Death mourns for them all. Every single nail penetrating into the board evokes the pain of one lost. Every nail reminds us to feel this pain. To feel is to know. 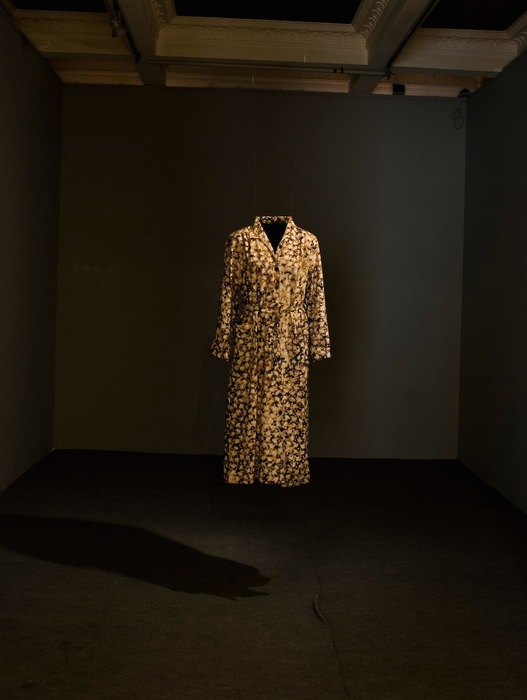 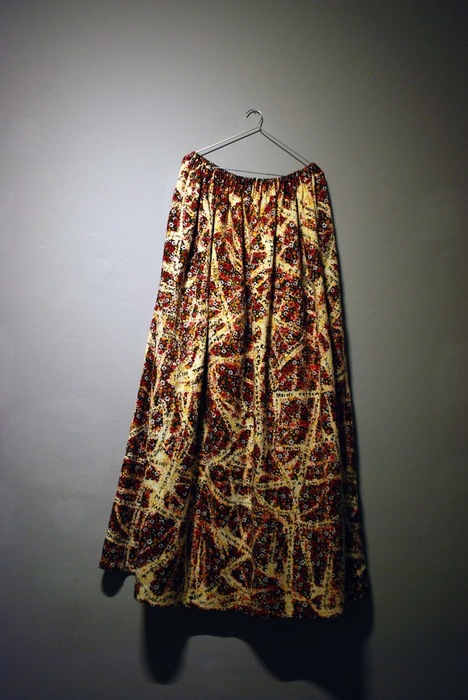 Neriman Polat’s Dress references a familiar material: flannel. Patterned with flowers, “it reminds the urban people of the immigration of rural, while reminiscent of our grandmothers, aunts, mothers,” Polat says. “It is a reference to traditional lives…a familiar object.” The artist faded out every single flower with bleach.” The flowers have flown away, and there’s a lot in what’s gone. Like the pains we have suffered, people we have lost, the people who were erased from our lives.” In another flannel work, a long flower-patterned skirt, she wrote the words “I’ll mourn” on bleached patches that resemble roads. “It’s like a promise,” Polat says, “a reminder of the grief we have never suffered thoroughly.”

CANAN’s poster work It was worth the evil eye into my world criticizes homicides and violence against women. In her poster series, she poses as a smiling woman whose face is transformed over six iterations into a dull, unhappy visage. HOW MANY MORE VICTIMS? the poster asks in Turkish. At the bottom, in a small font it reads: “Men’s love kills three women per day.” The series was made in collaboration with Amargi, a feminist organization in Turkey. The figure references Bergen, an influential Turkish singer who went blind in one eye after her husband threw acid on her face. She continued her singing career, covering one side her face with her hair while she performed. Bergen died at the age of 30, a feminist icon, after her husband was released from jail and shot her.

CANAN, It was worth the evil eye into my world, 2011, Poster series

CANAN uses Bergen as a symbol of pain and suffering while pointing to bigger issues: the number of women murdered increased by 1,400 percent between 2002 and 2009, and today it is estimated that 40 percent of Turkish women have experienced domestic violence with no viable action plan to stop it. The murderers are mostly people the women know: their husbands, lovers, fathers, brothers, etc. Each day, three women are killed because they wanted a divorce or break-up, they sent a text to an ex, they cooked the meal late, they dressed “improperly,” they laughed flirtatiously, etc. Like other feminists, CANAN believes these homicides are political, that the “personal is political.” “While people are suffering, others are living their daily routine,” she says. “Dead bodies of children are washed ashore, while people are planning their vacations in the very same sea.” People are killed each day, yet no one takes action against these murders. All they do is to forget, and look ahead.

Artists of this exhibition resist this forgetfulness. They want to remember, cry over, mourn, and live their grief to the fullest “in order not to fall from the edge of ‘loss’ into the abysmal void.” They write their laments for people whom no law protects, who could not be buried, whose death was seen as insignificant. They use their art not to fill the void left by those lost, but as documentation. In the end, they believe in the power of art to record metaphorically, so that the fragmented, pallid, and silent traces of social memory transform into something new—a space where we can heal in this atmosphere of pure evil.

#NotYetDead: Beyond the Selfie
3/17/16
COMMENTS (0)
ArtSlant has shutdown. The website is currently running in a view-only mode to allow archiving of the content.