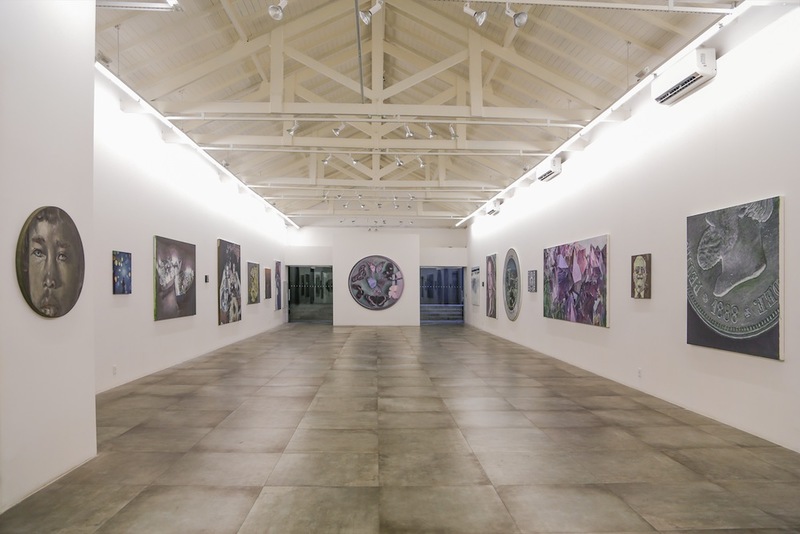 by Olivia B. Murphy

Days after the largest anti-government protests Brazil has seen in decades, with hundreds of thousands of protesters flooding Avenida Paulista in São Paulo, was the opening of Zed Nesti’s first solo show, Pra Inglês Ver, which takes a look back through the nation’s complicated past in an attempt to shed light on this tumultuous present.

The title of the show, which translates roughly to “for English eyes,” or “just for show” is thought to trace back to 1831, when the Brazilian Parliament, under pressure from England, supposedly outlawed the slave trade. However, the legislation was essentially “for English eyes,” as the slave trade continued in Brazil for decades. Now, with one of the country’s most respected past presidents, Luiz Inácio Lula da Silva becoming embroiled in corruption scandals along with current president Dilma Rousseff, pra Inglês ver rings especially true: what happens outside the public eye?

I met Nesti at the sprawling Bolsa de Arte gallery in the trendy Vila Madalena neighborhood, just a few metro stops away from Jardins, where the prior day’s protests took place. Dressed in black and wearing paint-speckled Dr. Martens despite the afternoon heat, he was quiet and pensive, choosing his words carefully as he explained the historical and cultural threads that run through the show, tying one work to the next. 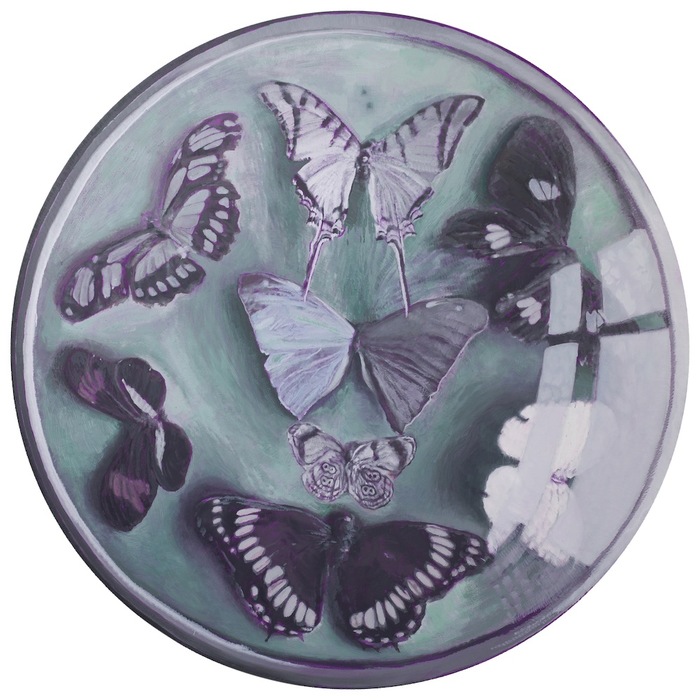 Though not the largest work in the show, the round canvas Souvenir (2015) certainly commands attention, holding its own at the far end of the gallery. This, Nesti told me, is the only painting that he sourced from a photograph he took himself—the others come from hours of internet research, and include images from Instagram and Facebook. “It’s tacky,” he affirms, “but kind of grotesque too,” noting the work’s similarities to the colonial practice of so called “ethnological displays” or Human Zoos in the 18th and 19th centuries. The effect of the curved, reflective glass is deceiving from afar, while up close the butterflies depicted pinned beneath give way to the artist’s loose, blurred brush strokes, breaking down and rebuilding the image.

Taking cues from Luc Tuymans’ “history paintings,” with Andy Warhol and Jeff Koons’ flare for the kitsch—“I couldn't continue to paint like Lucien Frued after seeing Warhol,” the artist told me—Nesti’s work in Pra Inglês Ver examines symbols that make up Brazilian culture. Drawing on past and present, politics and pop culture, he creates a survey of works that on the surface makes up the image of Brazilian culture that has been crafted exclusively “for English eyes”—the cheapened version for outsiders to consume via fashion magazines and tourists shops. 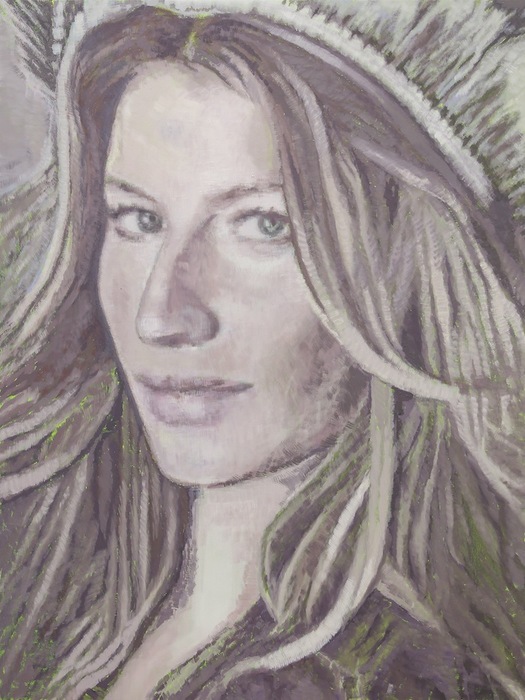 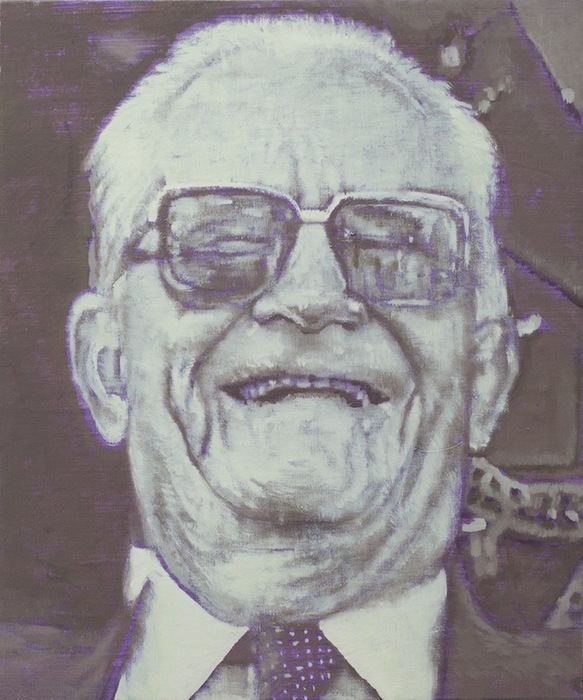 But beneath this is a deeper investigation of a history that many Brazilians might not wish to confront, along with a culture that outsiders may not easily grasp. With subjects ranging from Gisele Bundchen, in a painting depicting the supermodel wearing a traditional indigenous headdress (Gisele, 2015), to a portrait of Ernesto Geisel, the penultimate president during Brazil’s 21-year military coup (Geisel, 2015), the works evoke an uncertainty in how the viewer is to relate to this complicated imagery.

Nesti reiterates that he is not striving to take a political stance with these works. Rather, as an artist he asserts that he is “beyond good and evil,” beyond the rhetoric of left and right, using his work instead to “confront the past in order to better understand the present.”

Because of the neutrality with which Nesti presents these otherwise loaded images, along with the dulled-down palette he employs, the work tends to verge on the apathetic. But this apathy (which is reminiscent of the instant historification enabled by Instagram filters), serves not to care less, but more to slow down the looking process. Rather than amplifying the kitsch to epic proportions, as Koons does, Nesti tones down the glossy sheen of the advertising palette, stripping the consumable image of its easily digestible colors and surfaces. Instead, the viewer is left to consider the image along with the ramifications of the juxtapositions Nesti puts forth. 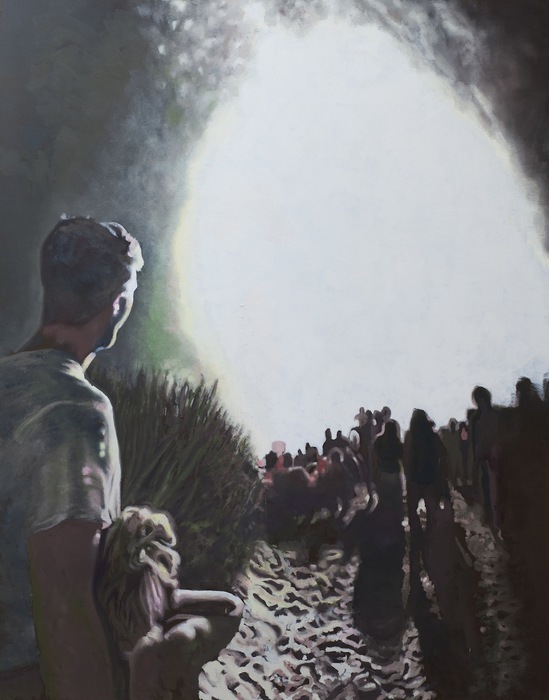 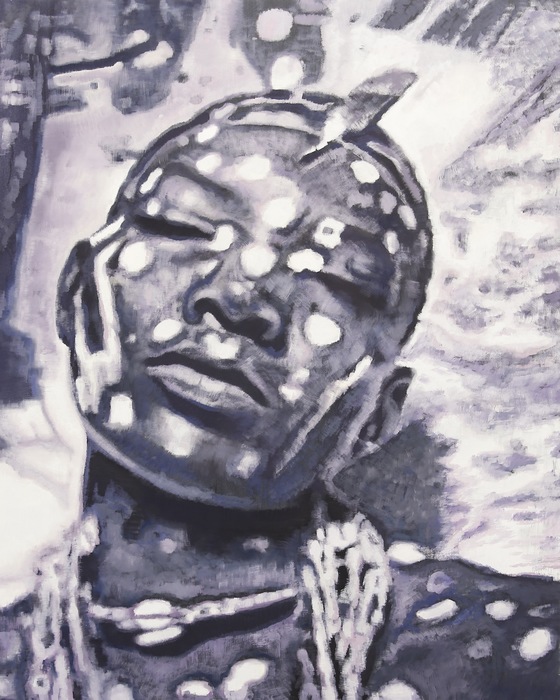 We see the buzzing lead-white glow of fireworks in Réveillon (2015), depicting a beachfront New Year’s Eve celebration, face to face with the purple-hued face of a traditionally dressed Afro-Brazilian in Candomblé (2015)—the traditional African religion whose practioners were persecuted in Brazil as recently as 1970. The celebration of réveillon has become a hugely popular party in Brazil, and despite the history of religious repression, its celebration appropriates for the masses many of its traditions from Candomblé and the festival of Yemanjá.

Of this complicated relationship to Brazil’s indigenous and African influences, Nesti states, "until we confront this part of our culture, we will be a falsification.” It is a sentiment that rings true throughout the current political state as well, with young artists frustrated by the lies and the corruption of the left wing government, but not yet willing to join in arms with the conservative opposition. With each work in the show touching on diverse symbols of Brazilian culture—the good, the bad, and the ugly—Nesti confronts the viewer with a history that he urges us to consider beyond its surface, making the work anything but pra Inglês ver.

Olivia Murphy is a writer and editor based in New York, covering arts and culture. Her work has appeared in various publications both in print and online, including L'Officiel Magazine, Freunde Von Freunden, Whitehot, Riot of Perfume, doingbird, and Whitewall Magazine.