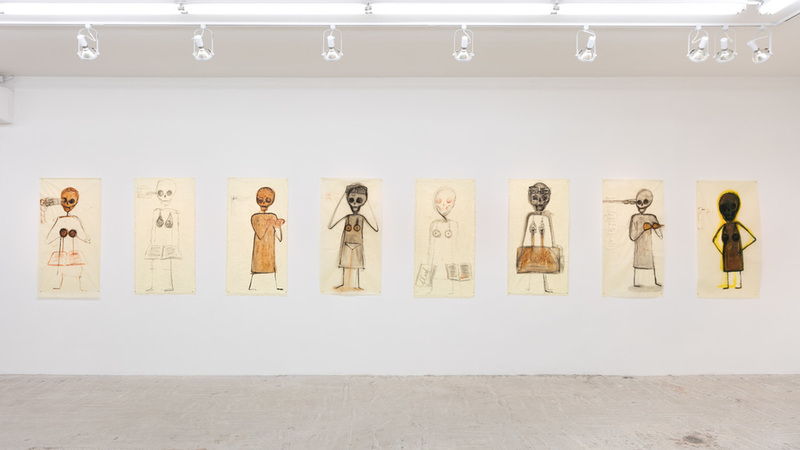 Paul of Tarsus wrote, “When I was a child, I spoke as a child, I understood as a child, I thought as a child; but when I became a man, I put away childish things. For now we see through a glass, darkly, but then face to face. Now I know in part, but then I shall know...” This passage from Corinthians comes to mind when looking at the recent work of Mira Schor, now at Lyles & King. Schor’s paintings, dark, compactly strong meditations on mortality, power, and language, show an artist wrestling with the big questions. Schor has always been a painter who confronted politics, art history, and painting head-on, and these new paintings don’t veer far from that course. 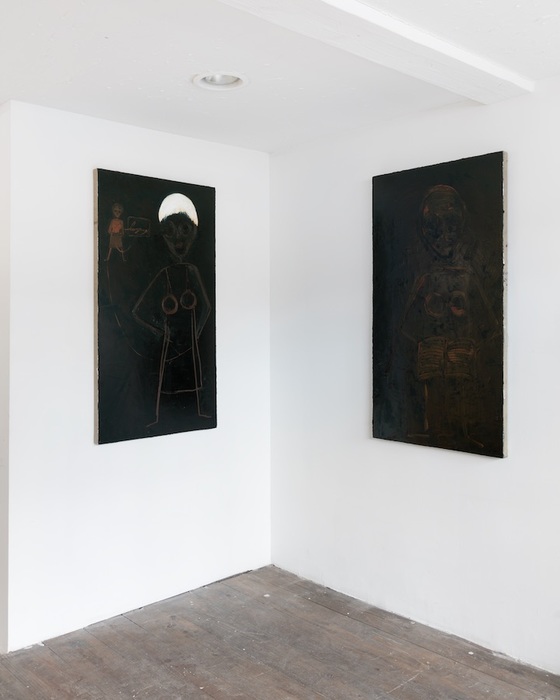 We understand from Paul that what we see is limited—only a portion of the truth, “through a glass, darkly.” In “Power” Figure #30: All that’s left is paint (2016) and “Power” Figure #24: Language (2016), Schor gives us dense, layered, dark grounds of impastoed paint, in a range of subtle blacks, illuminated by the delicate tracery of her hand. It suggests an artist who is searching, looking in Plato’s cave for deeper truths. Indeed, these two works, which are essentially self-portraits—the first of a large older Mira delicately attached to a tiny, floating younger Mira; the second an Andy Warhol-esque silver-haired Mira reading—are both iconic (à la Lascaux cave drawings) and personal (like Rembrandt’s overly intimate, late self-portraits). Yet, we might also interpret these monolithic paintings as a meditation on the role of painting in our current technological age.

The contemporary phrase “black mirror” alludes to the ubiquitous screens with which we are confronted as we watch movies, compose text messages, and, yes, even read this article, though they only become black when they are turned off. In the dull glow of laptops, cellphones, televisions, and Kindles, we see ourselves reflected—and sometimes distorted—through a glass, darkly. The modern looking glass is these myriad screens, all of which mediate our experiences of objects, and most especially, art. Schor’s adherence to the medium of paint, that oldest means of visual communication, lends her work a sense of authority, of historical knowledge, that is often lacking in the art world today, where commodity, Zombie Formalism, and intellectually bankrupt appropriational strategies have become the norm. 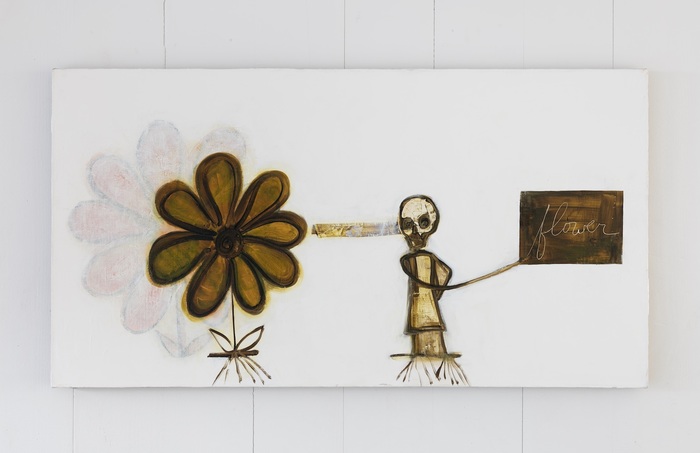 Schor’s most recent body of work presented the figure as avatar, a stick-figure understudy for the artist, in a series of “selfie” self-portraits. In Death Is A Conceptual Artist (2015), that figure has become a golem of sorts, its head a skull wearing a translucent shift, with umbilical lines of paint connecting breasts to books or text panel cue cards, and a giant floating flower. The umbilical lines are a deep red oxide, suggesting blood—little lifelines, of knowledge being passed to a new generation, and of tradition being traded at great expense. Schor understands the vocabulary of the millennial generation, yet her work suggests that there are traditions in painting that are slowly being degraded or forgotten—lost knowledge coming at great expense to our shared cultural understanding. Death Is A Conceptual Artist is schematic with the pieces of nature, culture, and self all separate but connected. Her paintings are a sly nod to “selfie” culture and her inclusion of text a rebuke to a generation who are leaving Facebook for Instagram because it uses “less words.” 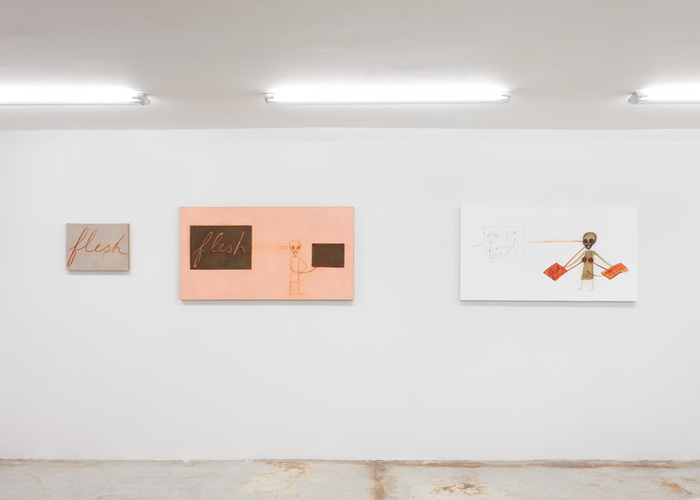 Language, as always for Schor, is a thing of utmost importance. Installed side by side are two paintings from 2015, both titled Flesh: one, a picture of the Mira figure with an umber cue card panel with the word “flesh” hovering nearby; the other, a pink on gray calligraphic rendering of the word “flesh.” Combined, these two paintings read as a Magritte-like image-play or rebus. Schor gives us a fleshy painted word, something intangible made solid through the mysteries of paint. This play on the painted word shows Schor’s continued interest in how language and image intersect. Indeed, her work as a writer and painter have overlapped in the past, often morphing into a painterly territory of existential calligraphy. Her interrogations of language as a source of power are captured with Johnsian succinctness in this diptych.

The bulk of the show is given to a series of studies, although that word seems somehow inaccurate, of the Mira figure, sketched at roughly the same size on tracing paper and presented in the chronological order of their making. Schor was partially inspired by a recent show at the Metropolitan Museum of Art of Mangaaka figures from the Kongo. Schor wrote:

The first time I went to see the show at the Met I became quite overwhelmed by the figures, their scale and stance and presence, so much so that I had to leave the room for a while before going back in. I was nearly in tears, of emotion and also excitement. I immediately felt that I had to respond to these figures, at first primarily to their scale and physicality. So after three days I created the first four drawings. 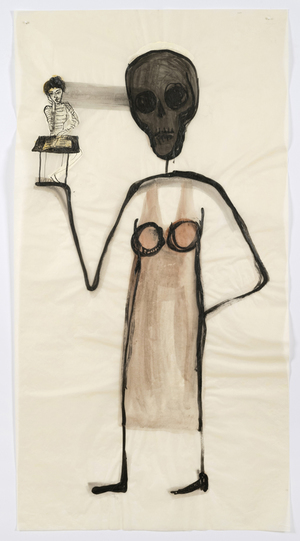 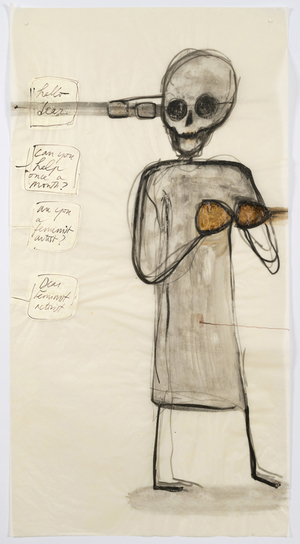 The depiction of power, though its presence is immaterial, has been a source of fascination for painters since, well, there has been painting. Michalangelo, David, Rembrandt, Benglis, Golub, Kruger, and Longo come to mind. Schor plays with the relationship of the figure, immense and monolithic, against the ground, delicate and ephemeral. In “Power” Figure #8: Hello Dear (2015), the figure, a death’s head wearing a nightgown or dress, carries detached breasts, like Saint Agatha. “Power” Figure #14: Mira at 19 and Now (2015) seems like a study for “Power” Figure #30: All that’s left is paint. Again we have a large figure with a floating, attached, tiny one. The small figure is a redrawing of a self-portrait Schor did at 19. Like Picasso, in his last self-portrait (Self-Portrait Facing Death, 1972), Schor gives us a schematic depiction of time at work. The Mangaaka figures which were the catalyst for this group may have had talismatic properties for their creators, but for the contemporary artist, Schor seems to ask, does art still have that power? Schor’s drawings are meditations on time and aging, and on the power of art to transform and transcend the temporal.

The scope of these drawings is vast. Schor references an array of fellow artists, a history of stylistic influences, and a lexicon of symbols, both personal and historical, that cannot be apprehended through one visit alone. Here we find the true source of power in Schor’s work: an artist who has amassed an arsenal of knowledge, armed with a sense of the importance of traditions and histories, who has transformed the information she has gathered into images of great beauty. One gets the sense while wandering through this show that the true audience for this work has not yet been born.

(Image at top: Mira Schor, Death Is a Conceptual Artist, March 18–April 24, 2016, Installation view at Lyles & King. All images: Courtesy of the artist and Lyles & King)