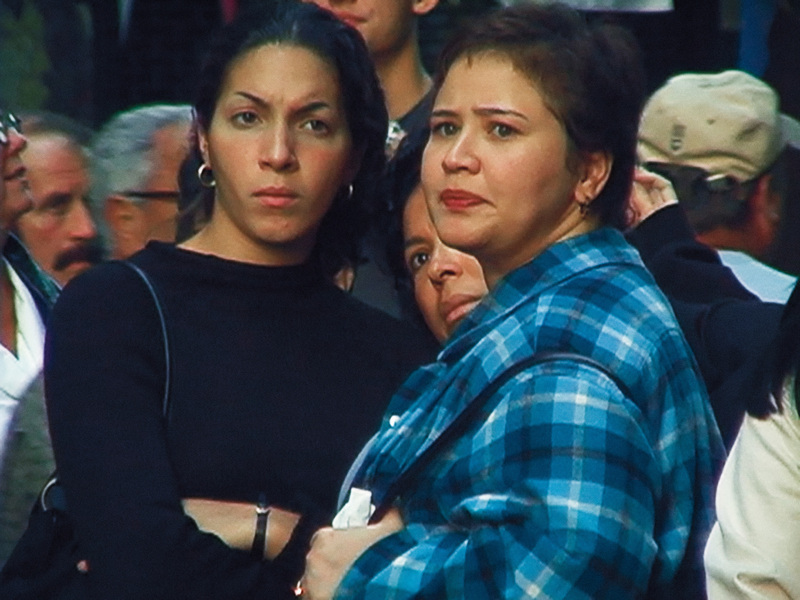 Body as Material in the Surveillance State

In a world moving at increasing speeds toward virtual realities and encroaching technologies, it can be difficult to remember the body. It is not until we are sick, do we understand our sense of heath; not until injured or arthritic can we visualize the joint or tendon; not until hair falls out do we wonder how it ever stayed in. It is the decay of the material of our body that makes us human and remember that we are. It is the body that I think about when considering the work of documentary filmmaker Laura Poitras, and the subject matter she works with: mass surveillance and the United States military program following 9/11.

Poitras is perhaps best known for her 2014 film Citizenfour (2014), the most recent in a trilogy of films dealing with the United States’ War on Terror. Citizenfour documents Poitras’ encounter with NSA whistleblower Edward Snowden in Hong Kong in the days leading up to the release of a trove of documents on the NSA surveillance program that would later be referred to as the Snowden Archive.

In the weeks that Snowden first made contact with Poitras, she was living in Berlin where she felt more confident her footage would not be seized or hacked. During this time, she described her anxiety in a journal she was afraid to keep. She was already considering the potential of an exhibition to deliver her subject material. She was reading 1984, watching films such as V for Vendetta and 2001: A Space Odyssey, and questioning long form versus short form filmmaking. She was considering the shape the exhibition could take, with suspended projectors in a vast warehouse, which could mimic a detention center. 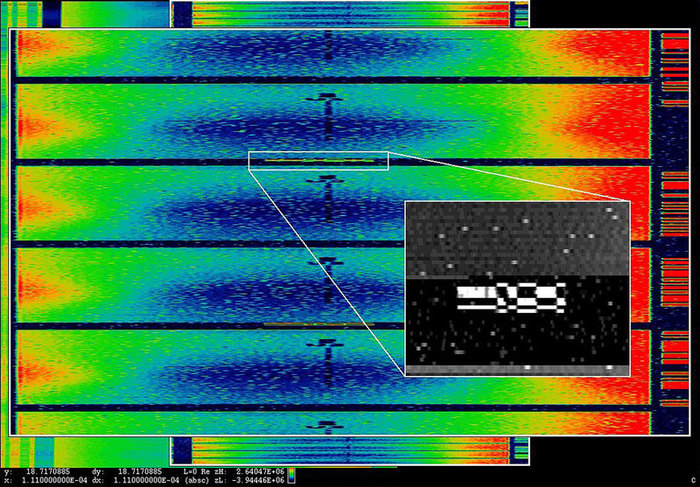 Her solo exhibition, Laura Poitras: Astro Noise, at the Whitney Museum of American Art through May 1, is not the manifestation of this initial vision. It is sanitized and simplified, parsed out into several stagings of content without the guiding narrative we depend upon in her film work. While the show provides a different platform for her message, it is not immediately clear that it is the right one. Meditative, stripped down and straight-forward, Astro Noise may provide a wider reach than one of her films—accessing an unassuming audience of museum visitors that might not go out of their way to see political documentaries—but it does not pack the same punch. The weight of the issues at hand, the enormity of the surveillance state, and the sheer numbers involved in the data collection programs are too vast and difficult to grasp. We must turn to physical material to comprehend at all the reality of the NSA’s program, which mimics science fiction and a dystopian future rather than the present day. In Astro Noise, the body is the material through which Poitras translates the consequences of the surveillance state and war on terrorism, turning the visitor into protagonist.

Poitras seems, to me, to be fully aware of her body. In her films and in person, her voice is unfaltering and just loud enough to be perfectly audible. There is a stillness in her presence and tone that I imagine to be sculpted by the dozens of instances she was forced to sit in an interrogation room at a U.S. airport for hours on end, answering a list of questions directed at her in a hostile manner. I considered her command of her body during a recent panel discussion, “Surviving Total Surveillance,” which took place earlier this month in the Whitney’s Susan and John Hess Family Theater as part of a series of programs in conjunction with the exhibition. Poitras sat unflinching, her presence discreet and unassuming, joined by artists and scholars Trevor Paglen, Jill Magid, Kate Crawford, Hito Steyerl, Whitney curator Jay Sanders, and moderator Jess Search, CEO of BRITDOC.

The audience was made immediately aware of the body as, following introductions, the discussion got underway with the screening of Hunger Strike, a short film by Poitras in which former Guantanamo prisoner Lakhdar Boumediene describes his torture at the hands of the prison’s guards and doctor. I thought of the body as Boumediene jabs at his forearm, imitating the sloppy insertion of an IV by an untrained guard; I continued to think of the body as someone directly behind me yelled for a doctor and the lights came on in response to a young woman fainting. 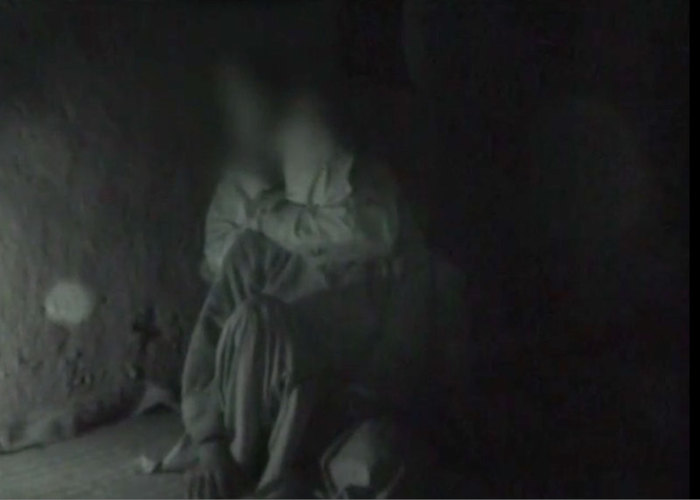 Upon entering Astro Noise, which has a defined beginning and end, we stand confronted by faces projected on a large projection screen that bifurcates the room. This first work, a two-channel digital video titled O’Say Can You See, 2001/2016, depicts on the entrance-side people gazing in slow motion at the site of wreckage where the Twin Towers had stood only days earlier. We never see the site, only the solemnity of people who cannot look away. The reactions are not dramatic in themselves; they reflect a near absence of response that can be equated to a sense of disbelief and incomprehension. It is not the spectacle of the Towers falling, but the hard to grasp reality of the aftermath. That aftermath is revealed in part on the opposite side of the screen, in footage of U.S. military personnel interrogating two prisoners in Afghanistan that same year. Prisoners sit on the floor with their legs folded under them, answering the questions of standing men with guns. At times a bag is placed over their heads, causing a sickly feeling in my stomach and a question of what might happen to that body. The suspension is not granted a Hollywood ending—a quick finish. Poitras is much more interested in the waiting. 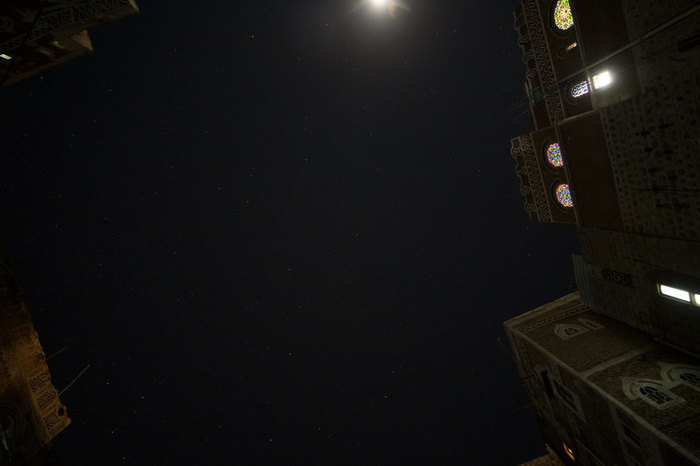 Another work, Bed Down Location, invites visitors to lie on a carpeted platform in a dark room, in order to stare at a projected sky on the ceiling. It is the night skies above Yemen, Somalia, and Pakistan and the day skies above Creech Air Force Base in Nevada, where the military tests drones. The images of the night sky are nearly soothing, with crowds getting comfortable lying on their back amongst strangers, as they listen to layered audio of drone pilots and drones themselves.

What follows is an installation titled Disposition Matrix—a dark corridor with mail-slot-sized holes at varying heights emitting powerful, cold light. Within each narrow window is a document or video documentation related to the War on Terror. Captions at the end of the corridor reveal them to be things such as “Line drawings of implements of torture at secret CIA detention sites…a waterboard, a confinement box, and suspended chains” and “Mixing and laying of concrete.” It is a densely packed design that expertly produces a sense of intense curiosity that encourages an intense commitment to text and footage that might otherwise be glossed over. When I visited, I had to wait behind several others crowding the tiny points of access, creating uncomfortable suspense until I could finally step up and engage with what was inside. Once it was my turn, I made sure to soak up as much detail as I could in the text, drawings, or video, since my time peering though each small window was fleeting and its obscurity made it that much more compelling. 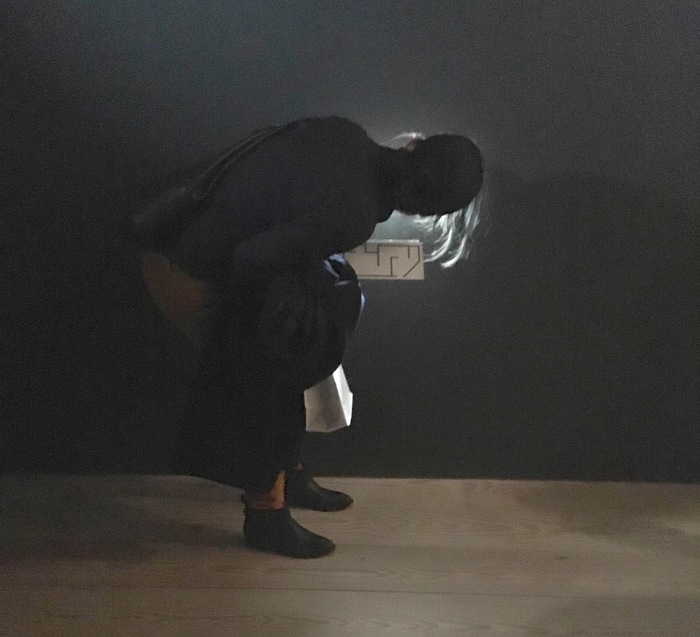 Viewer looking at a document in Disposition Matrix, 2016. Photo: the author

The installation is interactive and exploratory; sometimes the materials are straightforward while other times, such as the footage of concrete, they are more abstract and open to interpretation. The documents are not interpreted by Poitras for the viewer, nor are they mediated in any overbearing manner. While the installation turns each viewer into an independent investigator, following a trail of clues and evidence to construct a narrative, it also creates a temporal distance between us, the protagonists, and the details of the plot. It is as if the crime has already been committed and now all that’s left is to identify the sequence of events. The wall we peer through to get a view of the drawings, files, and videos can be understood as the veil of secrecy that keeps the public in the dark, but it also creates a historical delineation and produces a false sense of the documents as something we have a safe distance from in the present moment, when in fact, the surveillance and policies these artifacts represent continue to this day. While visitors might hungrily consume the texts and footage, there is little confrontation, and the presentation approximates an archival environment with its dark passage and spot lit displays. It is not a simple task to embody a space in which the things presented have implications for us, us the museum visitors, the tourists, the art lovers.

What struck me most was the time people took in navigating Astro Noise. The exhibition is designed to mimic a cinematic arc or time-based medium in its near-linear direction, with a definitive beginning and end. The narrative arc even has a climax in the form of gentle viewer complicity, in the work Last Seen, a monitor with scrolling data on every individual with a cellphone trying to access the museum’s wifi, alongside another monitor depicting the infrared image of the bodies watching Bed Down Location a few yards away. In this culmination of unwarranted participation we have our bodies laid out before us, their heat detected by cameras we thought to be representations of something much, much farther away. 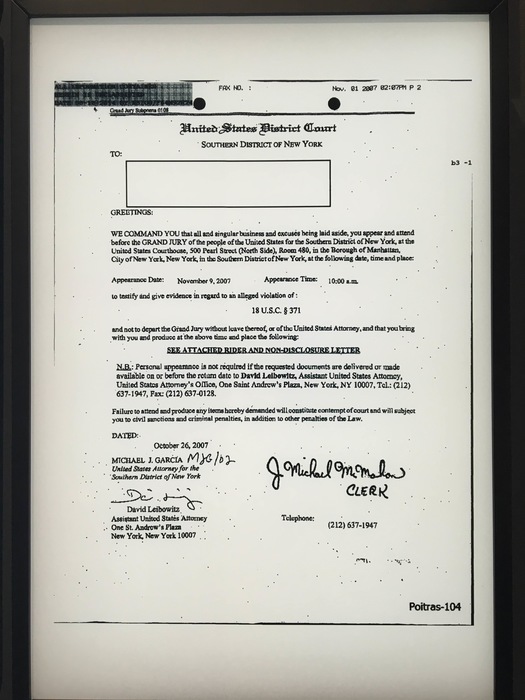 In these pared-down representations of surveillance, Poitras attempts to break down the massive data collection program that hovers above us. It is very likely many, if not the majority of visitors to the Whitney are not familiar with Poitras, her work, or the content she depicts, but Poitras does not take her audience for dumb. Nor does she attempt to sway a viewpoint with manipulative tactics. The works in Astro Noise are rather straightforward, nearly cold in its presentation. In this iteration of her subject matter, Poitras is desperately searching for the fault lines in the sensibilities of each visitor, where a general sense of indifference of the United States’ post 9/11 surveillance program might be pried open to allow for brief but intense skepticism. In these moments of doubt, there is the possibility that we insert ourselves more directly in the broader narrative Poitras is pointing to. She attempts to distill the complexity of the story of the War on Terror, of the Snowden Archive, of the NSA program into singular examples of real consequences. The editing process, however, results in placing the onus for an emotional connection squarely on the viewer, and more often than not, she fails to move us.

I cannot help but think of the birthmark on Edward Snowden’s inner left upper-arm, which I became fixated on for the duration of Citizenfour, in each scene looking for a glimpse of that identifying mark. It is his body onto which I can project myself in this dystopian story, his body that can no longer freely cross borders; it is Poitras’ body, as she describes it in the Berlin Journal—“I can hear the sound of my blood moving through my veins”—that helps us understand the intensity of her fear and paranoia, which are entirely warranted; it is Lakhdar Boumediene, imprisoned without reason for over six years, describing what happens when a prisoner in Guantanamo stops eating. Astro Noise challenges visitors to place our own bodies within this narrative of the fiction of privacy and of overreaching government control: a difficult request, and for many, one easy to ignore.