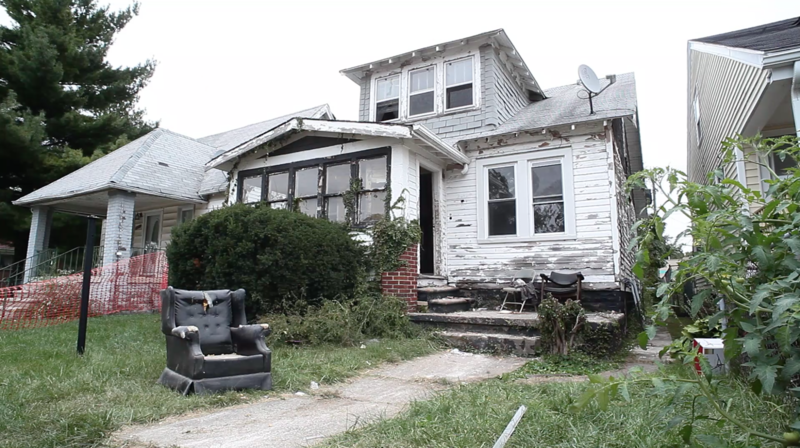 Is it a sculpture? A political indictment? A social activist gesture? Or maybe some form of contemporary historiography? It’s not really clear how to define or classify Ryan Mendoza’s Detroit House. One thing’s for sure, though: it’s not a house.

You could easily be fooled into thinking it is. It’s got a roof, walls, a porch, windows, and a door you can enter through. It lacks, however, neighbors, a path or driveway leading up to it, a connection to the local power grid, a foundation—in short: physical and social context. It has been plonked in front of the Van Nellefabriek, the venue of Art Rotterdam, this week. After the fair the structure will be taken apart, packed in crates, and transported to the Verbeke Foundation near Antwerp, where it will settle in next to Atelier Van Lieshout’s intestine-shaped apartment, Kevin van Braak’s CampingFlat, and Frank Castelyns’ stacked shipping containers. 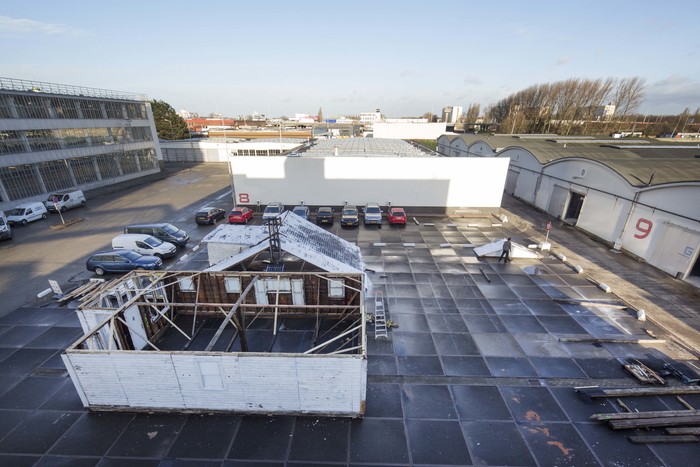 Mendoza’s house originally stood in Detroit, one of America’s cities hit hardest by the subprime mortgage crisis that started in 2007. But even long before that time Motor City, formerly home of the world’s biggest automotive companies, had been in serious decline. During its heyday in the 1950s the city’s population stood at 1.8 million but by the turn of the century it had dropped by some 35 percent. The stagnating economy and the city’s bankruptcy in July 2013 sped up urban exodus in subsequent years and the numbers dropped to 713,000 residents. A lot of Detroit looks like a ghost town. Hundreds if not thousands of homes have been abandoned. The municipality has taken to demolishing entire neighborhoods as an anti-squatter measure and so it doesn’t have to maintain expensive public services like water supply and sewerage for those few left behind. Some neighborhoods, Hantz Woodlands for example, have been turned into farmland; others have been left to become urban prairie.

Mendoza came to Detroit after having lived in Europe for over twenty years. During the economic boom of the nineties the New York native moved to Naples. Even though he blended into the European scene, a sense of being American remained—and that’s partly what he went looking for. Inevitably Mendoza had grown “outsider’s eyes.” Besides, in two decades’ time America had changed: it had become less optimistic and more polarized. Detroit, a city Mendoza had only visited via Google Maps, fit the bill as a symbol for those developments. In the same sense his Detroit House is not a home but an idea of home, encompassing feelings of belonging, protection, and collective memory. 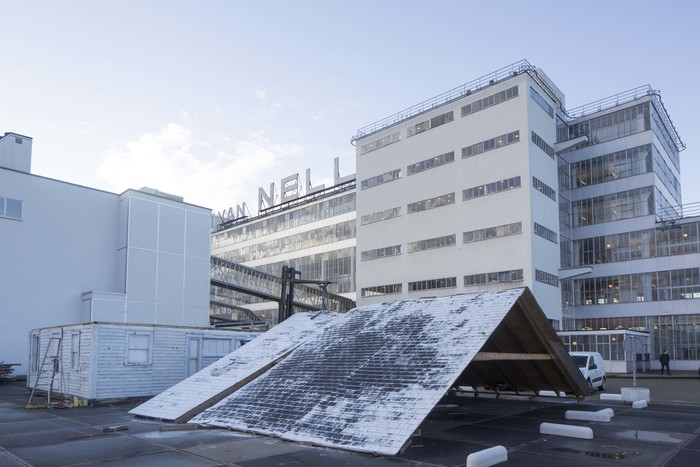 A video on display in the Detroit House shows Mendoza roaming the desolate streets of suburban Detroit. He talks to famous locals like boxing champion Thomas “Hitman” Hearns, members of hip hop-granddaddies The Last Poets, and the techno-pioneering musical collective Underground Resistance. They are part of Detroit’s rich cultural heritage, together with Motown, Eminem, The Stooges, Alice Cooper, and many others. The video is a declaration of love to Detroit, the once embodiment of the American Dream that has turned dystopian.

Another video shows pictures of the Thomas family, who lived in the house from the 1960s onward, until they defaulted on their mortgage in 2012 and had to leave. The images are mixed with pictures of Mendoza’s own childhood, growing up in the States. It’s a self-reflexive take on identity and the passing of time. Mendoza further explores the theme in his paintings of American interiors, in which he combines images from his own past with cartoons. These will be presented at Art Rotterdam by Livingstone gallery, The Hague.

As a painter Mendoza enjoys referring to renaissance art, expressionism, and sloppy strands of realism. As the creator of Detroit House he’s also standing on the shoulders of giants: an American and a European (who mostly lived and worked in the US) to be exact. The latter is Hans Haacke, who in 1971 famously mapped the real-estate holdings of one of New York City’s biggest slum landlords: Shapolsky et al. Manhattan Real Estate Holdings, A Real Time Social System, as of May 1, 1971. About the same time Gordon Matta-Clark started buying and documenting tiny, often inaccessible parcels of land auctioned off by the city of New York, that were the result of rampant property development. In later years he gained notoriety with his “building cuts,” sawing houses in two or removing floors and facades, disabling both their functionality and the utopian dream of belonging they embodied. 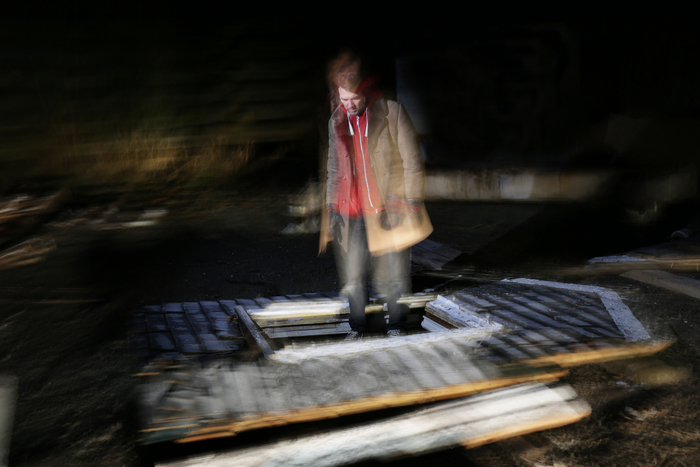 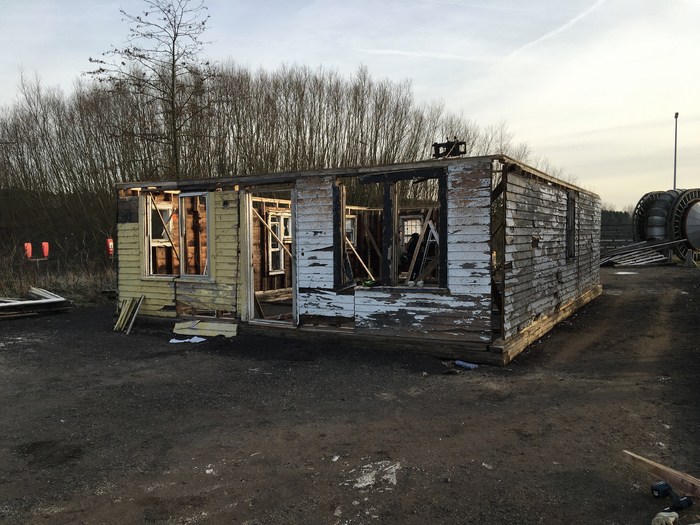 Mendoza does something similar but takes it one step further. By literally lifting the house out of its original context and putting it squarely in an art environment, he allows the work to remain ambiguous. It’s a self-portrait, historical looking glass, and architectural model rolled into one. And, of course, a strong political statement. The house is the reward hard-working folk were striving for before it was snatched away from them and discarded as useless. Explosive stuff in times of heated presidential elections—with candidates sparring over what's best for the 99 percent—and the poisoned water supply in Detroit's neighboring Flint, a crime that in one fell swoop threatens human bodies and destroys the value of their homes.

But rather than inserting his work into the political debate Mendoza takes an activist stance. Besides the Detroit House on show at Art Rotterdam, he has stripped and shipped two more homes, which will be auctioned off in Berlin and Milan in the coming months. The proceeds go back to the city of Detroit. This twist lends Mendoza’s project the wry brand of engagement akin to the video Enjoy Poverty: Episode III in which Renzo Martens encourages poor Congolese photographers to exploit their own misery by selling images of hunger and war. Mendoza sells the debris of a financial collapse and turns it into relief aid. Life turns into art to be pumped back into life again.

Frieze Week 2016: Your Guide to the New York Fairs
5/2/16
COMMENTS (2)
architectural design outsourcing
It's a Very Wonderful detail. Thanks for sharing this great article! http://www.yantramstudio.com/
Comment by: yantramstudio on Wednesday 04/18/18 at 10:20 AM
Activism or Exploitation
Why not interview the folks who lost the houses, and unwind that story. Interviewing a bunch of famous people from Detroit also has a darker side - the way artists engagement with celebrity culture - to be famous is the name of the game, and those people did not lose their homes. http://dieselssuicide.blogspot.de/2016/02/artist-activism-or-exploitation.html
Comment by: merle le blanc on Tuesday 02/23/16 at 12:23 PM
ArtSlant has shutdown. The website is currently running in a view-only mode to allow archiving of the content.