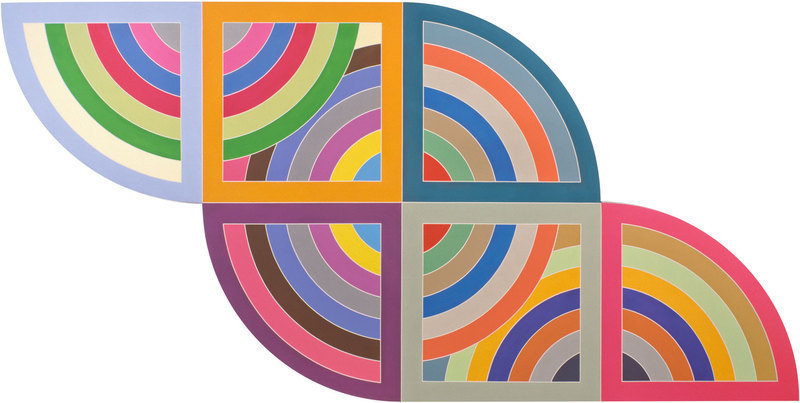 The Whiteness of the Whale: Reframing Frank Stella's Long Pursuit of Painting

We cannot begin any assessment of the work of Frank Stella without the obligatory quote that has followed his career for over fifty years. “What you see is what you see” was Stella’s painterly philosophy distilled down to seven words. If there is a definition of Minimalism that is more succinct, it has yet to replace Stella’s as a key to understanding a certain type of particularly American painting in mid-century art history.

At the Whitney Museum we have a chance to carefully review Stella’s work, something that has not happened since his last retrospective at the Museum of Modern Art in the 1987. Stella has had either the great fortune, or great curse, of being a painter whose work gained immediate attention with his Black Paintings—strikingly simple, yet endlessly ponderable tangrams of painterly philosophy. Then, according to the sentimental narrative of art historical storytelling, he spent the rest of his career in slow, steady decline as his work began repudiating everything that he had started out to do. It is of great credit to the Whitney that through this carefully curated show we might see how Stella’s works did in fact retain certain threads of thought, ideas that slowly matured over time, and how his visual syntax built upon itself, rather than just being jettisoned, when he turned his attention to more complex, decorative, and large-scale work that more resembled theatrical decors. 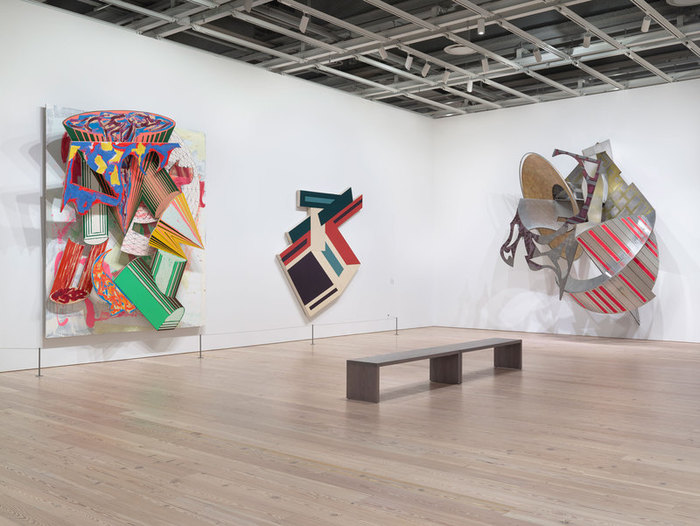 Stella’s biography lends itself to the belief that he was a prodigy, one who began painting at 14, attended Princeton, and then moved to New York in 1958 at the height of a time when Abstract Expressionism had opened up the scene, and Pop Art, Color Field, and Minimalism were all vying for, and to some degree sharing, the attention of an audience that was hungry for new visual experiences. Stella’s appearance in Emile de Antonio's 1972 film Painters Painting (probably the best source for appreciating that moment in the early 60s when everything seemed possible in painting) shows a young painter at work on his Black Paintings, chewing a cigar, resembling what we might get if we crossed Groucho Marx with Vincent van Gogh, saying, “I want the paint to look as good on the canvas as it does in the can.”

It is interesting to compare Stella to Jasper Johns, another anointed prodigy whose early works were immediately injected into art history at almost the same time. If Johns was the John Cheever of American painting, with his Americana (maps of the United States, American flags, gun range targets) thinly veiling a brittle, wounded sensibility, then we might be tempted to think that Stella was the painterly equivalent of Philip Roth. Works before the Black Painting period, like Mary Lou Loves Frank (1958), Your Lips are Blue (1958), and the regrettably destroyed Mary Lou Douches With Pine-Scented Lysol (1958), share something of Roth’s writing sensibility: a sharp wit, a willingness to embrace vulgarity, and a terse feeling of prose that masks a deep interiority. In attempts to turn Roth’s books into film, we can see the difficulty of showing visually the character development and transformation that he achieves in his work; we can make a comparison with how much Stella struggles later in his career to illustrate certain concepts through a visual vocabulary. It is wonderful to be able to compare Mary Lou Loves Frank with its biting turn of phrase (does Frank love Mary Lou?) to the austere Jill of 1959 with its diamond-shaped pattern suggesting living room rugs, pinstripe business suits, good jobs on Madison Avenue, and engagement rings. 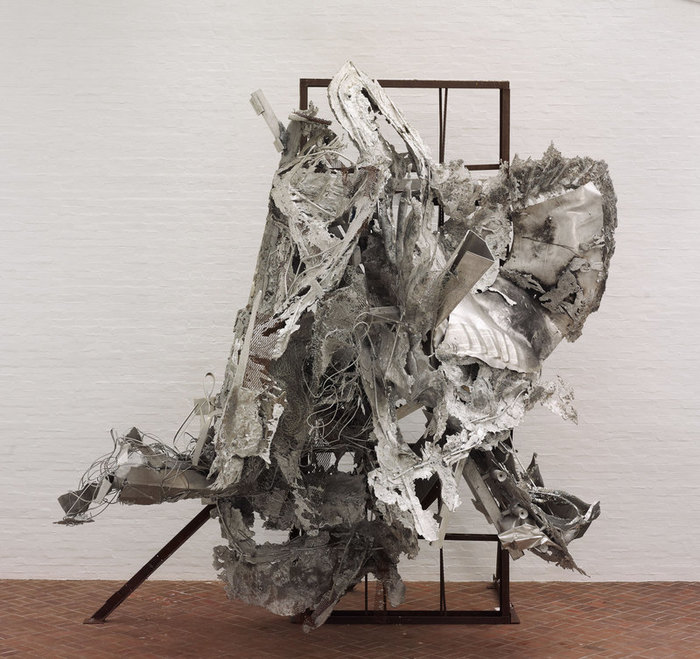 While the idea of comparing Stella to Roth might at first seem spurious, it is important to remember that throughout his career he did return to literary sources: Your Lips are Blue has echoes of Salinger’s A Perfect Day for Bananafish, and At Sainte Luce! (1998) was inspired by stories of the German writer Heinrich von Kleist. With his Moby Dick series from 1986–1997, Stella found a source whose ambition, sense of humor, and visuality (the depictions of the “whiteness of the whale” must have held great fascination for Stella) matched his own. Even in The Raft of the Medusa (Part 1) (1990), one of Stella’s best forays into sculpture, we can see how he tries to create a sense of narrative through abstract aluminum pours and splashes (à la Richard Serra) and build a sense of drama against the support structure of the sculpture’s armature. Like Théodore Géricault, who created a replica “set” of the Medusa’s deck when he painted The Raft of the Medusa (1818–19), Stella reprises the theatricality of the scene at the moment of rescue. 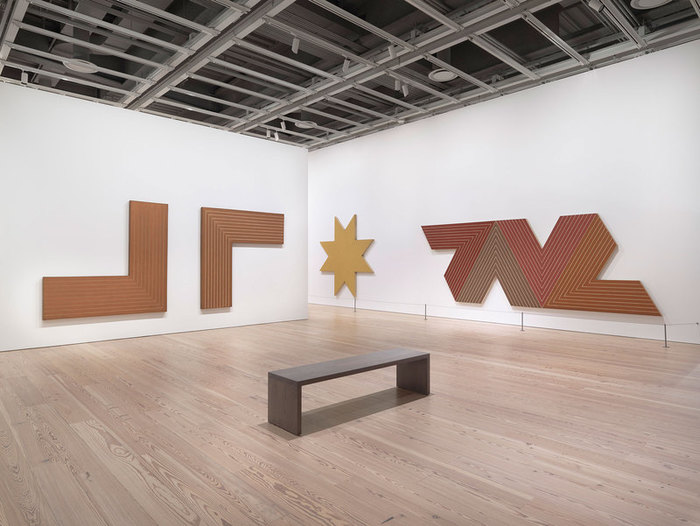 Beginning with the Black Paintings, then following into the Aluminum Series, the Copper Series (Plant City, 1963), and the Irregular Polygon series of 1966 (Chocorua IV, 1966), Stella carefully excised the humor and gesture from his work—or, it might be closer to the truth to say he submerged it and replaced certain notions of beauty and aesthetics, which were the dominant paradigm of the mid-50s, with the pure beauty of color and geometry. We see, though, through the constant emphasis placed on his titles—like Die Fahne Hoche! (1959) or Moultonville II (1966)—that story, set, and setting were constantly there, under the surface, waiting until the 1970s to be made more manifest and integrated into a “whole” of pictorial narrative. At the time, in the mid-80s, when he decided to tackle Moby Dick, there was a general consensus that Stella’s work had become bloated, overwrought, and sinking under the hubris of its creator. It is somewhat paradoxical that that was the same period when painters like Julian Schnabel, Susan Rothenberg, and Anselm Kiefer were being lauded for similar pursuits in their work. In retrospect it is easier, perhaps, to see that Stella had not abandoned his principles or pursuits, but was expanding on concepts he had been working with all along. 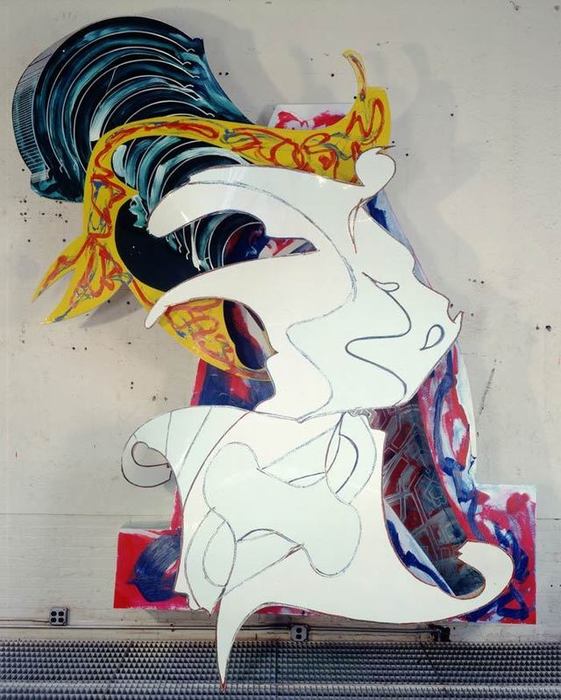 One of the great needs that painting fulfills, along with certain types of musical performance, film, and literature, is a type of analog experience that cannot be replaced with virtual or digital media. At a moment in cultural history when there are artists who are practicing abstraction with a knowing wink, the “zombie formalists” whose existence is largely intangible by being shown mostly at auction houses, it is important to see Stella’s work as a whole—a body of paintings that exist both as objects as well as records of time. Our way of viewing them has changed over the years, and, thus, they are a kind of constant, a measure of how things are perceived, change, and are seen anew. We will always need a place to practice not being distracted, and like a book or a film, painting offers a specific separate place where one can be alone with a mediating object to experience thoughts and ideas that are not your thoughts, but those of an artist sharing personal experiences with you. Stella’s paintings, and the Whitney Museum’s generous exhibition, provide us a place where we can share in his long search for meaning in painting.