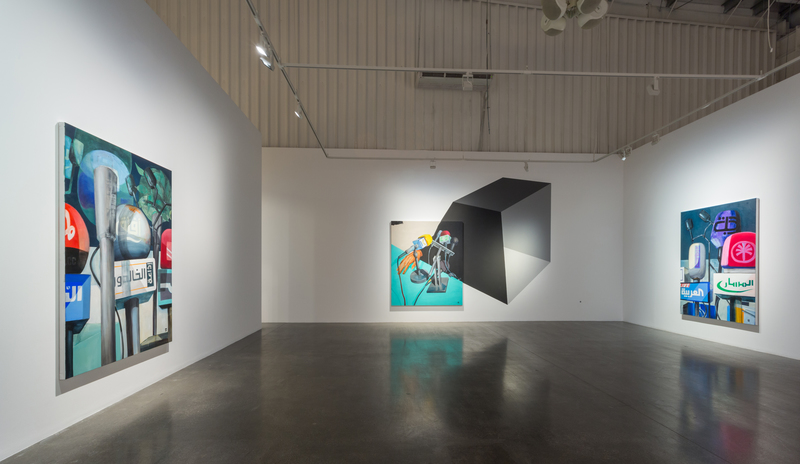 Iraqi-Finnish artist Adel Abidin returns to his painterly roots for the first time in six years with Immortals, a solo exhibition running at Lawrie Shabibi in Dubai. The show, which challenges society’s perceptions of Arabic-speaking media, gives visitors the feeling of watching live news on television, with some irony added in.

The outstretched hand of a cleric appears from behind a microphone-strewn podium, while his body is obscured in black. The artist seems to suggest that figures of authority are interchangeable—only as powerful as the media and its followers’ consent. Other canvases depict a candy-colored garden of microphones with broadcasting channel logos—a nod to the lucrative industry consisting of around 500 news bureaus competing for air time in the region—each trying to outdo the next by breaking plot twists and turns with the greatest shock value.

A banner presenting urgent headlines circles the gallery walls in Arabic. While these racing stripes typically present conspiracy theories, official pronouncements, or death tolls to viewers, Abidin’s banner is in fact an ironic translation of the Beatles’ 1965 ballad: “Yesterday, all my troubles seemed so far away. Now it looks as though they're here to stay."

Abidin has tackled the way that society creates prophets out of media personalities and channels. His 2015 video work, Michael plays tribute to the late pop legend through a spoof entertainment talk show, in which Jackson seemingly reappears from beyond the grave, returning as a Western spiritual leader who speaks in combinations of lyrics cryptic enough to have appeared in the New Testament. In contrast, Life is Short, Let’s Have an Affair (2014) is set in Amman, Jordan, where Abidin was accused of having a romantic fling with a married woman—a claim that eventually went to trial. The courtroom-like installation consists of a series of speakers projecting robotic voices representing the accused, the accused’s husband, and lawyers. Abidin is no newcomer to questioning the power given to institutions through his art.

We spoke at Lawrie Shabibi on the occasion of Immortals. Here are some highlights from our conversation: 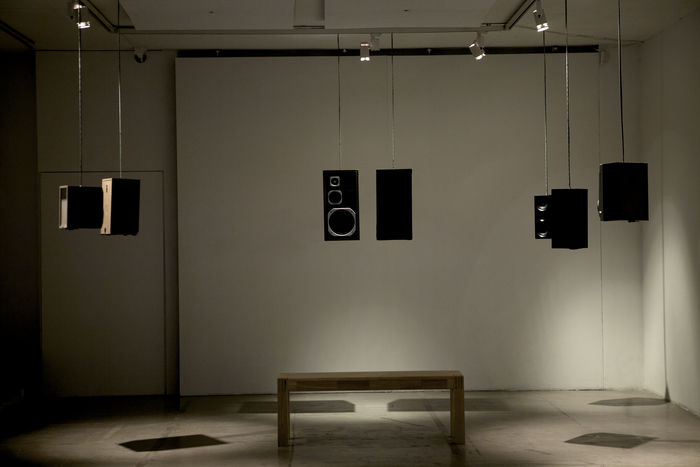 Danna Lorch: Why have you decided to return to your painterly roots with this show?

Adel Abidin: It’s not returning. I believe that all mediums are meant to be used. The choice depends upon the concept you are arguing for or working on. Some topics are best presented in video, but this particular project made the most sense in oil on canvas.

DL: Why not present Immortals through video instead?

AA: I had wanted to paint for the last six years and realized that this was the right topic. I would have the opportunity to zoom in mentally and create relationships between the microphones.

You always view the microphones from below as though you are under them. I wanted to give them a monumental quality—as though they are immortal. The formula of manipulation includes a speaker, a mic, and a receiver. The speaker and receiver of information are changeable over time, but the media has and will always be there. 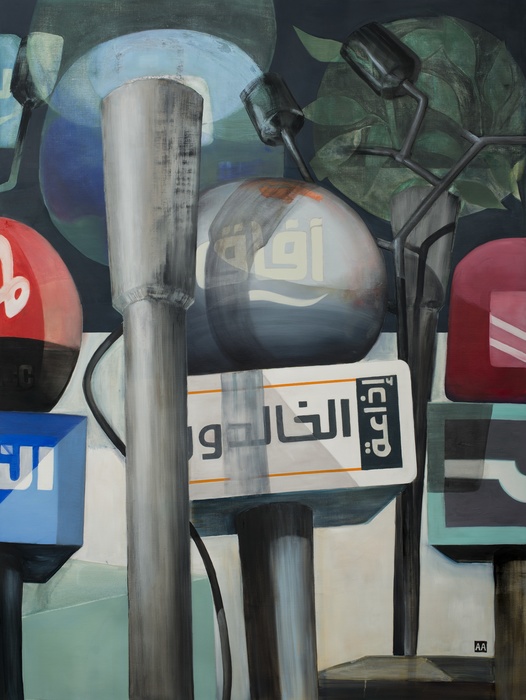 DL: Do you fundamentally see yourself as a painter because that is where you began?

AA: To be honest, I see myself as a visual artist. It took me a while to get my hand out of stiffness when I went back to painting. I would tell it to move in a certain way and it wouldn’t obey. At first I destroyed a canvas. I thought, I’m screwed. But then I decided to have fun. I started working—waiting, going out at night, coming back the next day—the whole package. Then it came. I spread all four canvases around my studio so if I messed up on one I could move to the next without getting stuck.

DL: What was happening in the media while you were working?

AA: I live in Finland and I don’t have a TV. When I visit my parents in Amman [Jordan], I watch the TV, because in the Arab world the TV is bought even before the sofa. It’s the source of knowledge for them. Some Muslim cleric came onscreen and was giving a talk. At the beginning I was listening to him, but then I was looking at the composition of the whole thing. You literally don’t see his face. Mics, mics, mics like lollipops standing with chewing gum colors like blue, aquamarine, and yellow. On top of that you have headlines in primary colors running across the screen. Is this an amusement park I’m looking at? That was when I decided the idea needed to be taken further. 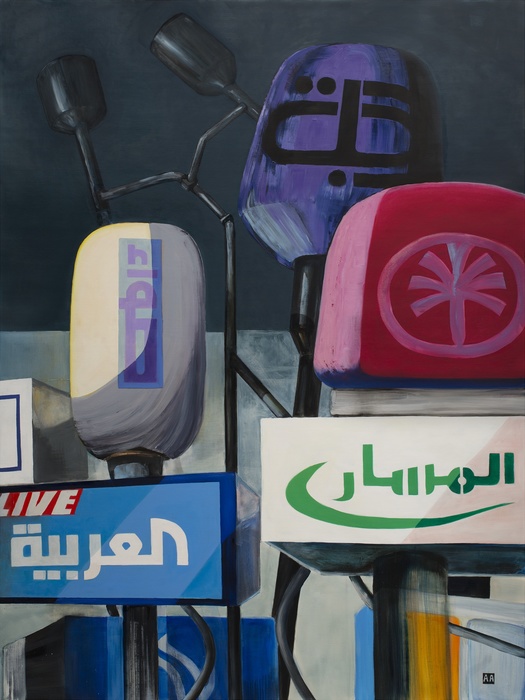 DL: These are immortals because people have agreed that all information they receive from the media is legitimate. There are people I know who don’t check anything except Al Jazeera. It’s their one news source.

AA: It’s like the Bible. They only listen to that one channel and whatever it is saying is what they use to argue. But you cannot argue if you don’t have another point of view. How many people in the States follow Fox News?

DL: Michael was also looking at the media, but from a different angle. The imagined reality in that piece took place in Manhattan but was referencing how people create icons and messiahs out of figures in pop culture.

AA: We always need an idol to lead us. If you don’t have a leader with charisma to guide you, people start fighting. These days, Hollywood stars are more influential than real prophets. When I imagined the piece, I was looking to bring back a dead icon and decided Michael [Jackson] was the best example because of his lyrics. When I wrote the script, all his answers come from actual lyrics. It became very deep philosophical/bullshit. 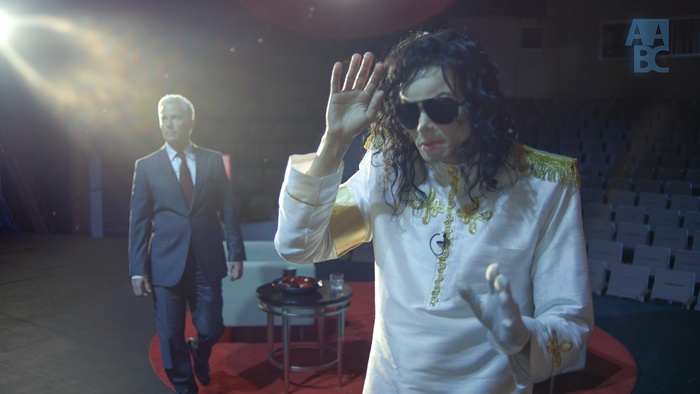 Adel Abidin, Michael, 2015, Video still of Michael leaving the studio of The 1 Show. Courtesy Lawrie Shabibi and the artist

(Image at top: Adel Abidin, Immortals, Installation view, From left to right Immortal Monuments, The Absence of the Cleric, and A Platform. Courtesy Lawrie Shabibi)