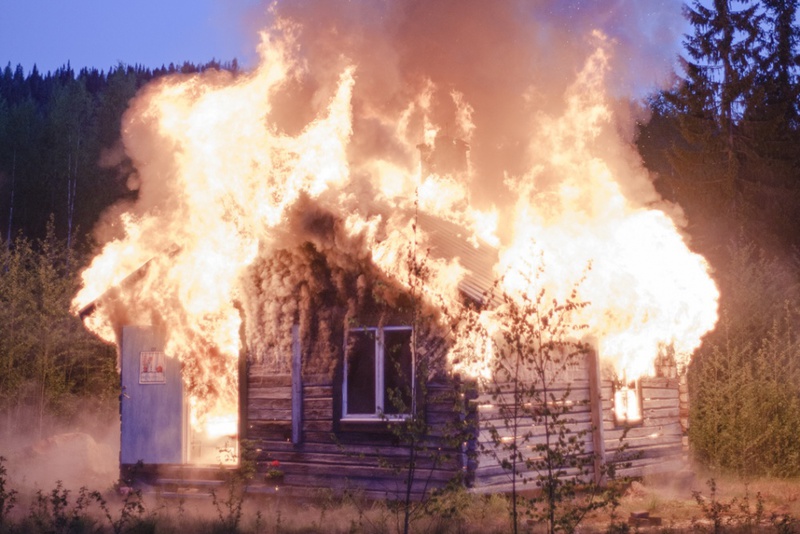 The Only One Who Knows Desire

I last felt this way when reading Ada by Nabokov. The pitch of amorous Baroque satire is about the same. Nabokov’s delicious novel traces a lifelong affair between a brother and sister (beginning with him aged fourteen, her eleven), under the pretense that they mistakenly think themselves cousins. It is set in the late nineteenth century, at their families’ summer home, in a place resembling the South of France. Opening in time for FIAC in Paris, Icelandic artist Ragnar Kjartansson’s exhibition at the Palais de Tokyo, entitled Seul celui qui connaît le désir (loosely translated to The only one who knows desire), is a full fall into the fantasy of bourgeoisie romance.

The exhibition is about, like all things in the European canon of courtship, a brief and fleeting encounter between a man and a woman. If ever there were a story of a successful love affair without the tragic subtext of some sort of obstacle or impossibility, the constructed allure of Western romance, as we know it, would stop dead in its tracks. We have become accustomed to reveling in the fiction, and Kjartansson exposes that. The exhibition as a whole collects and worships these brief moments of desire as they’ve become familiar to us, these media-taught episodes of scenes: a couple makes love steadily and repetitively in a perfectly minimal bedroom, a dog barks at the sight of its owner swimming laps in a quaint pool, a man in a suit stands attentively against a white wall. These are Scenes from Western Culture (2015), a series of suspended cinematic screens that weave in and out of projections containing tableaux of otherwise transient activities extended into loops of repetitive action. 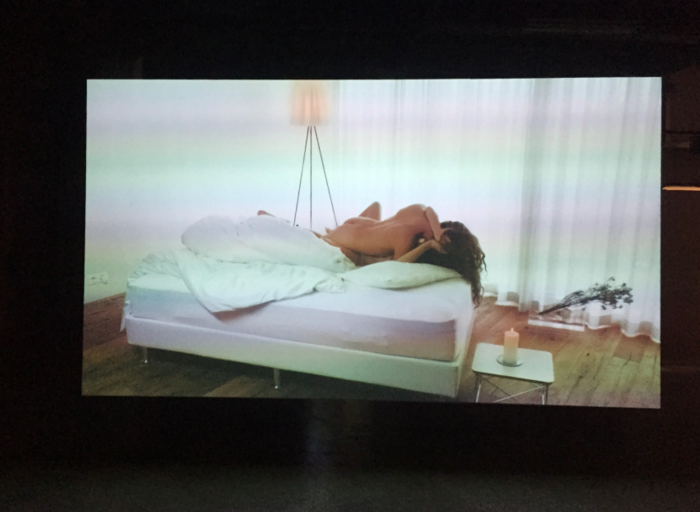 “Repeating the same thing infinitely means magnifying a moment in everyday life, it means conveying what it is to be alive,” says Kjartansson. Indeed, the tale of Western romance is in fact a better and more valuable story if the love is unrequited—if the idea of love, and not the execution of it, is extended. This is where Kjartansson’s story begins—at the missed chance—to elaborate on a whole narrative of the aesthetics surrounding the romantic. Where most would use the stage as a platform to allow a performance to unfold, Kjartansson produces the stage and presents it as the object of primary focus. This is the case in Bonjour (2015), a full-scale set of a picturesque French village square, which is continually programmed by two actors in the museum from open to close performing the same scene over and over again.

The equivalence to Nabokov’s plot is a useful in a few ways—the first being that the late nineteenth-century novel takes place on a twin of earth, in a parallel universe named Antiterra. It is a story that is removed from taking place in a local history and is supplanted with a generalized history. It follows the trajectory of Earth’s collective past, but without precise details (it is open to interpretation and fiction). The second is that the novel opens with the discovery that the two lovers in question are indeed closer in relation than the plot describes. In both of these circumstances, the reader knows what the characters do not.

For Kjartansson, and anyone who has experienced his exhibitions, this sentiment will feel familiar. The staged elements of his previous shows echo these two situational qualities with clarity and precision. Within his installations, the viewer is omniscient—operating within the meta-knowledge of fiction, and the full awareness that while the actors in the performances surely know the status of their acting, they portray no evidence of their artificial context.

In short: we know they know; they pretend there is nothing to know. Seul celui qui connaît le désir is in stark reference to this sense of singularity and awareness. 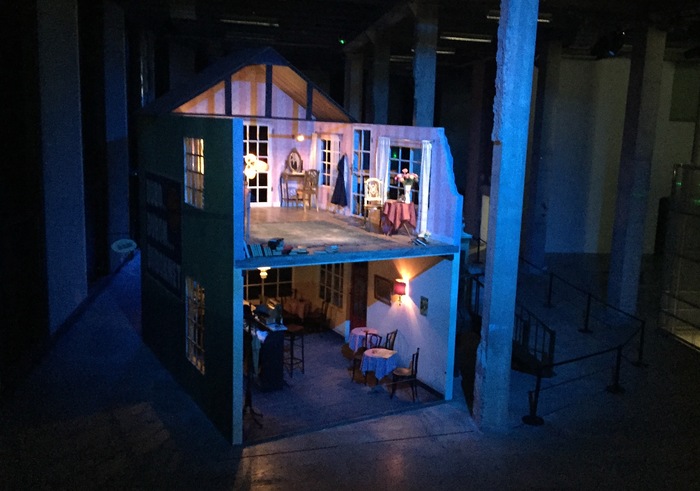 We enter the exhibition first through text. Appropriately enough, even if by chance, the sequence of the words in the exhibition title, and their repeated syntax, will show up in a Google search return populated with results from French authors Baudelaire and Proust. The words, as well as the authors who have used them for other stories, are ubiquitous. But in fact, the exhibition’s title is lifted from Goethe—the German iteration of the poem’s source is blown up large in the entrance to the exhibition. So are lyrics to Frank Sinatra, who similarly borrowed the text. The two translations (both literally and figuratively) frame Kjartansson’s first piece—a stage set of mountaintops, or tips of glaciers, that occupy the entrance plaza of the space. Having myself just returned from Iceland, it was easy to see how this treatment of nature is a deadpan joke, paling in comparison to the snow-topped mountains visible in the distance from almost any part of the main highway, or to the majestic vastness of Jökulsarlon, the glacial lagoon in the southeast part of the island. There was something balletic, even operatic, in how the masses of cloudy pale blue ice, marbled with back sand, danced and shifted in the bay of the clear water lagoon. 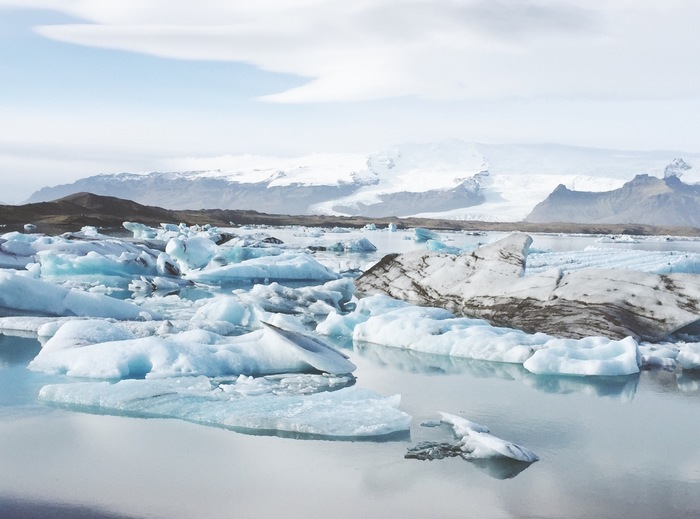 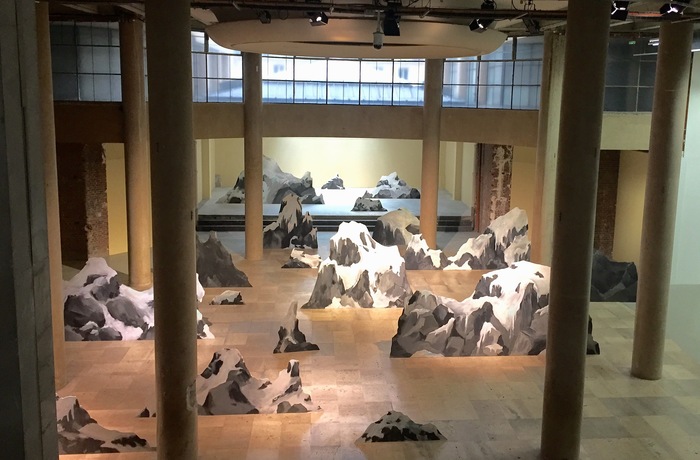 Here, we have only summits. Nothing keeps Kjartansson’s installations from being indulgent. As with the exhibition as a whole, decadence heeds satisfaction.

Seul celui qui connaît le désir sets up the same expectations of romance that its aesthetics have trained us to suspect. As observers, we are never fully absorbed into the scenery, but are constantly made aware of the prop-like nature of our environment within the gallery. The failure to achieve a true idyllic state is implied in Kjartansson’s work, but it is a failure that is synonymous with awareness. This is not a bad thing. The implication of this term is what makes us moral viewers—it draws our attention to what it means to be a good participant/audience. We share the space, but not the spectacle.

In Seul celui qui connaît le désir, beyond the stage there is a glimmer of authenticity—and the promise (if not the threat) that we will, at the very least, be enchanted.