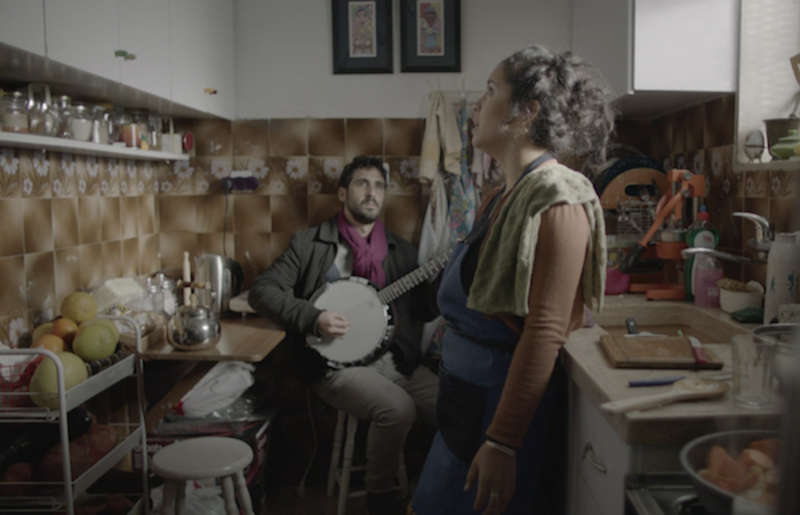 Moving Image at Frieze Week: Song and Dance, and a Dark Clown

Despite the pre-eminence of moving image in contemporary practice, the field remains under-represented at art fairs such as Frieze. This year we are likely to see the usual sidelining of artists’ film and video inside the Great White Tent in Regent’s Park—though of course there are always the Frieze Film commissions, tucked away on Channel 4’s late night Random Acts programme. The imbalance is adjusted somewhat by the strong presence of moving image across high-profile commercial and non-profit spaces elsewhere in London throughout October, with some intriguing recurring themes connecting an otherwise disparate range of work.

Music is the catalyst behind a number of exhibitions, most notably Music for Museums, a screening programme and series of live events at Whitechapel Gallery focusing on the relationship between visual art and experimental scores. Predominantly comprised of contemporary works, the screening programme reflects the diversity of the field: the phantasmagorical remixing of Sonia Boyce and Ain Bailey’s Oh Adelaide (2010) playing alongside Sounds from Beneath (2011-12) by Mikhail Karikis and Uriel Orlow—an exploration of shared history and the sculptural potential of voice, in which the sounds of a working coal mine are vocalized by a choir of retired miners.

At Carroll/Fletcher, Richard T. Walker’s everything failing to become something considers the artist’s formative attachment to indie rock bands of the 1980s and 90s, in relation to the “combined legacies (and clichés) of land art and romanticism.” To make the two-channel video projection the predicament of always (as it is) (2014), Walker positioned electric guitars within various desert landscapes of the American south and threw small stones at them, recording the incidental sounds as the projectiles glanced off the strings and editing them into the backbone of a score. The result is a fragile, fragmented composition, built from chance encounters and heartfelt yet inadequate attempts at communication.

For Jumana Manna—whose feature-length film A magical substance flows into me (2015) is screening at Chisenhale Gallery—music is not just a motivation but a methodology. Manna’s research into German-Jewish ethnomusicologist Robert Lachmann’s Oriental Music radio programs for Palestine Broadcasting Service in the 1930s lead her to revisit the communities that he studied, her focus shifting between the archive and the contemporary players who preserve and adapt the diverse musical traditions of her hometown, Jerusalem. The film follows Manna’s encounters with these musicians as she replays Lachmann’s recordings for them, then video-records their own performances in living rooms and offices. Themes of corporeal history, fragmentation, displacement, and excavation are extended to a series of hollow plaster sculptures resembling body parts from broken statuary, positioned throughout the audience’s seating area. 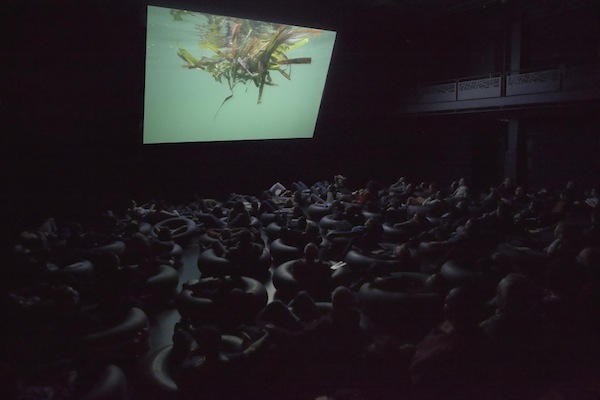 Coco Fusco, And the Sea Will Talk to You (2012), Courtesy Cecilia Brunson Projects

Displacement and migration are also explored by Coco Fusco’s And the Sea Will Talk to You (2012) at Cecilia Brunson Projects; George Barber’s video installation Fences Make Senses (2015) at Waterside Contemporary; and two immersive multi-screen installations by William Kentridge at Marian Goodman Gallery. Kentridge’s works fuse drawing, text, puppetry, song, and dance in the artist’s typically spellbinding manner. More Sweetly Play the Dance (2015) is a single-file danse macabre in which a procession of itinerants—reduced to mere silhouettes and shadows—moves relentlessly forward in equal parts celebration and desperation. Notes Towards a Model Opera (2015) draws on research into Madame Mao’s Eight Model Revolutionary Operas, exploring their eccentricities—she required dancers to learn to “throw a hand grenade en pointe”—while muddying their binary good-versus-evil structure through Kentridge’s palimpsestic whirlwind of influences and ambiguities.

Dance’s potential for problem-solving is the subject of A Question of Movement (2011) by Marcus Coates and Henry Montes, screening at Kate MacGarry Gallery. For this project Coates—who frequently adopts clownish or shamanic roles to respond to the concerns of individuals or communities—uses interpretive dance to answer a series of questions such as “why is it so easy to be distracted by unimportant things?” and “how should I proceed from a personal crossroads?” Channelling mental and emotional anxiety into physical activity, Coates writhes, stumbles and hums in the small spaces of the questioner’s kitchen or office, refining his dance until the questioner decides a certain compatibility of feeling has been reached. Coates’ ambiguous, aloof stance maintains an important tension between ridiculousness and sincerity in the work, preventing a slide into feel-good sentimentality.

Substantial solo exhibitions by Ben Rivers and Jon Rafman each explore marginal communities and outsiders, though their methodologies and fields of interest are worlds apart. Rivers’ show Earth Needs More Magicians at Camden Arts Centre presents pockets of the world inhabited by people out of step with the "global village," whether through self-imposed or geographical isolation. The soft bloom of 16mm obscures the age of the footage, casting Rivers’ films adrift in time as well as space, and underscoring the blurring between fiction and documentary. Films include a study of the tropical island of Tanna in the South Pacific, and a two-projection portrait of reclusive British painter Rose Wylie at work in her studio and leafing through sketchbooks filled with drawings of furniture and cats. Earth Needs More Magicians is coupled with Edgelands, a complementary group exhibition curated by Rivers including works by artists such as Prunella Clough and Max Ernst. 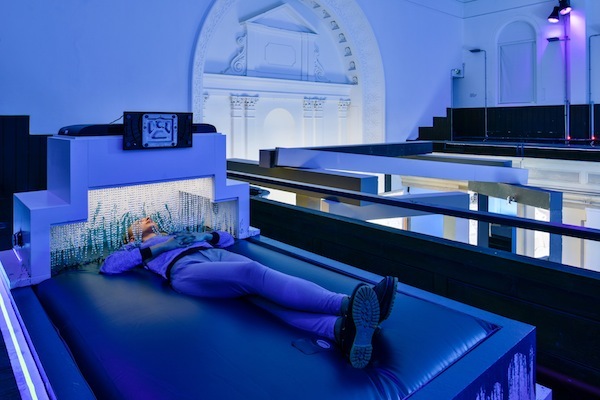 Whereas Rivers draws on and complicates ethnographic and documentary traditions, Jon Rafman’s excavations of the "depths" of the internet align more closely with archaeology. Mining online and video game landscapes for content that is uncanny, uncomfortable or unintentionally violent, Rafman collages together ruminative audio-visual essays on the nature of addiction and obsessive consumption, memory and failure, and the anxieties and promises of technology. For his major exhibition at Zabludowicz Collection, Rafman has constructed a series of immersive environments around video screens, requiring the viewer to crawl into cupboards, sink into a ball pit, straddle a massage chair, navigate a maze, or don an Oculus Rift headset. The virtual and the viscous reach a particular synergy in Sticky Drama (2015), a short film inspired by Live Action Role Play in which a cast of children—faces plastered with Cronenbergian prosthetics, their costumes adorned with Tamagotchis and DVDs—play out a brutal quest narrative, accompanied by an anthropomorphic lump of fatty matter. Green slime abounds. 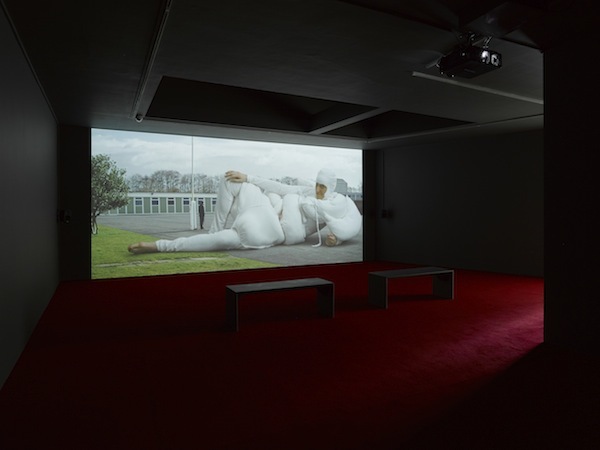 Conflict, manipulation and the performance of power are at the heart of Adam Broomberg and Oliver Chanarin’s solo exhibition at Lisson Gallery. Forming the centrepiece of the show is the video Rudiments (2015), which intercuts the grimaces and grotesque posturing of a Bouffon—or "dark clown"—with clips of British cadet training, all set to a driving percussion score. The Bouffon’s residency at the military academy leads to a haemorrhaging of comedy and tragedy, in which the clown absorbs the gestures, movements and facial expressions of the young trainee soldiers—exaggerating their imperfect attempts at regimentation—while also teaching the cadets tricks of the theatre: how to fall as though dead, and to feign a slap. Rudiments is complemented by photographic works of enigmatic forms, including large-scale ("blown up") studies of military grade prisms used in weaponry and photographic lenses, and Civil War bullets that have collided and fused in mid-air. Pervading the exhibition is the constant buzz of a snare drum roll, played without pause by a team of two alternating drummers: an anticipatory, simmering tension that is equal parts control and frustration.

Culture and violence collide again in Jos de Gruyter and Harald Thys’ cross-media exhibition Fine Arts at Raven Row. The gallery’s lower three floors are filled with watercolors—of horses, ruins, German castles, beggars, waiting werewolves, a Canopic jar, lion tamers, a slave ship, a rainy Parisian street, a pygmy elephant—rendered with slapdash charm in upbeat pigments. Postcard views and massacres hang side by side, as smiles turn to grimaces: historically and financially, "exotic" amusements and patronage of the arts cannot be separated from colonial plundering. Though lacking the false charm of the watercolors, the selection of video works spanning de Gruyter and Thys’ 30-year collaboration projected in the period flat above the gallery are also shot through with unnerving violence—fingers burnt by a cooking pot; amateurishly choreographed duels and beatings; soft toys deliberately disfigured by a backyard pipe bomb explosion. Unsmiling, awkwardly dressed actors—mostly members of the artists’ families—plod their way through feeble conversations, or enact absurd and aggressive encounters. Many scenes progress haltingly through a series of tableaux—human freeze frames—in mockery of the glut of staring, posing and being watched that increasingly substitutes for interaction in the age of the smartphone. 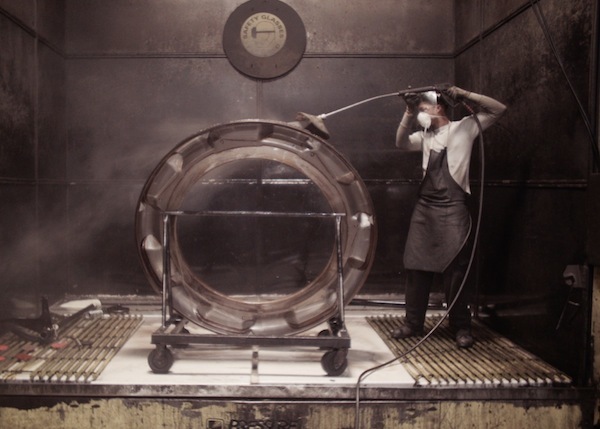 I’ve written previously that the time commitment invited by artists’ film and video can offer a welcome change of pace from the Instagram-and-go, window-shopping routine that art fairs seem to engender. An extreme case is the film Park Lanes (2015), which at 480 minutes is the duration of an average working day. Filmed in a factory that produces bowling alley equipment, Park Lanes observes a series of employees as they undertake their assembly-line tasks in isolation, piecing together components that are unrecognizable out of context. Director Kevin Jerome Everson shot the film over a week and composited the footage into the structure of an eight-hour shift: Park Lanes is intended to be screened without intervals, extending its considerations of labor and leisure into the space and time of the cinema through the effort of extended perception required of its audience.

Park Lanes is screening at the BFI as part of Experimenta, the artists’ moving image strain of the London Film Festival, which runs through to October 18 and features new and archival work by artists including Omer Fast, Tacita Dean, Mark Leckey and Marie Louise Alemann.

(Image at the top: Jumana Manna, A magical substance flows into me, 2015. Production still. Co-commissioned by the Sharjah Art Foundation and Chisenhale Gallery with Malmö Konsthall and the Biennale of Sydney.  Courtesy of the artist and CRG Gallery, New York.)