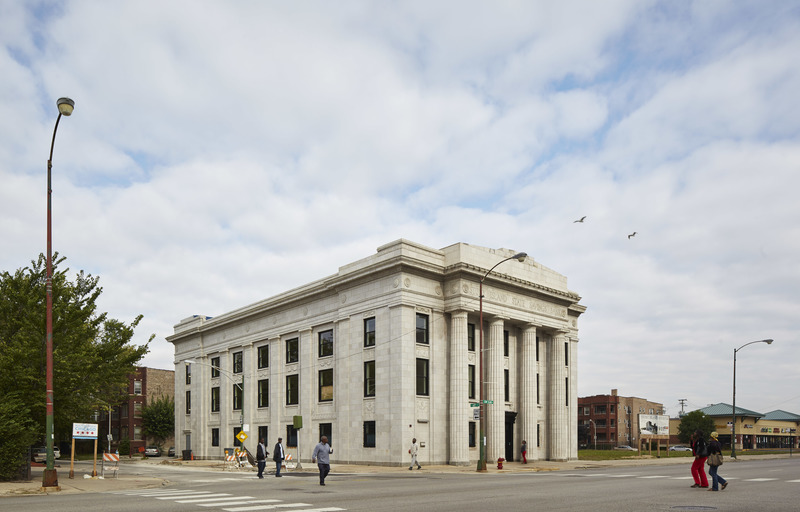 By now, many will have read Ben Davis’ piece on artnet news, a piece of social and market criticism that takes on Chicago artist Theaster Gates’ newest endeavor: the opening of the Stony Island Arts Bank, a part of the Rebuild Foundation. It is a piece that necessarily traces the social implications of the newly minted space within the larger space of Gates’ practice, and Chicago itself, using Gates’ relationship to Mayor Rahm Emanuel as its central lens through which to look at the implications of the artist’s practice, and the position between private and public wealth his work straddles. Within the larger scope of Gates’ output, this building, alongside the others he has restored, is an integral part of his work: the buildings themselves can be, and are often, categorized as falling within his oeuvre as much as the smaller pieces he will sell in gallery exhibitions or art fairs to fund architectural projects such as the Bank.

While Davis’ piece comments on the complex territory and politics of Gates’ project, it obfuscates on the largest element of the Stony Island Arts Bank—which is that regardless of Gates’ positioning, the function of the building exists first and foremost as an exhibition space. Though the Bank’s exhibition model is cloaked in a discourse that has become familiar, if not demanded, when speaking about Gates’ work (i.e., social practice), the form is still quite traditional: comparatively, the space acts just as any other contemporary art foundation or institution on two basic principles. First, it is a viewing space that is programmed with contemporary art on view, and second, it houses a collection that is integral to its mission, which includes the Johnson Publishing Company’s floor-to-ceiling library on the second level and Frankie Knuckles’ vinyl collection tucked away in the back of another gallery on the third floor.

The form of Gates’ institution is where Davis’ slippage between the private and public domains begins, but from the perspective of the market. 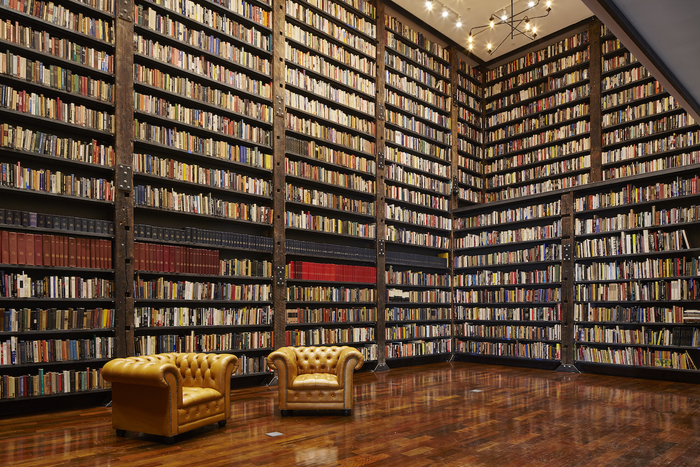 For me, as a writer approaching a review of the first exhibition at the space—an installation by Porto-born, Barcelona-based Carlos Bunga—it seemed vacuous, nearly trivial, to write a piece that looks straight at the work, especially after the proliferation of writing surrounding Gates’ context that has been published. How could one ignore the massive agenda of Gates’ enterprise that Davis suggests? Strangely, the coercion to treat the artwork as an isolated experience was not a question I had not asked of many other exhibitions. Why now, in a context that Gates has made so ripe for context, does Bunga’s show seem to resist fitting into the contextual?

Perhaps it was no mistake that Davis left out the exhibition in a piece about Gates’ bank.

It was only through questioning this exhibition under the same set of guides applied to writing on any other given museum or gallery exhibition that I came to the alternative conclusion: writing about this exhibition is no different from the others. What Bunga’s show, and the Bank itself, provides is the reinforcement that the experience of contemporary art can be used to talk about a variety of subjects, while the artwork itself can still remain autonomous. Art is not outside of reality. This has always been an undercurrent for Gates, and his latest piece—an artwork that houses other artwork—conforms to that idea. If we are to talk about Gates as a platformist, it is essential that any commentary about the market, any critical view on his context at all, be looked at through the vehicle of the exhibition. Through the Bank, Gates’ voice is operating under the auspices of others. 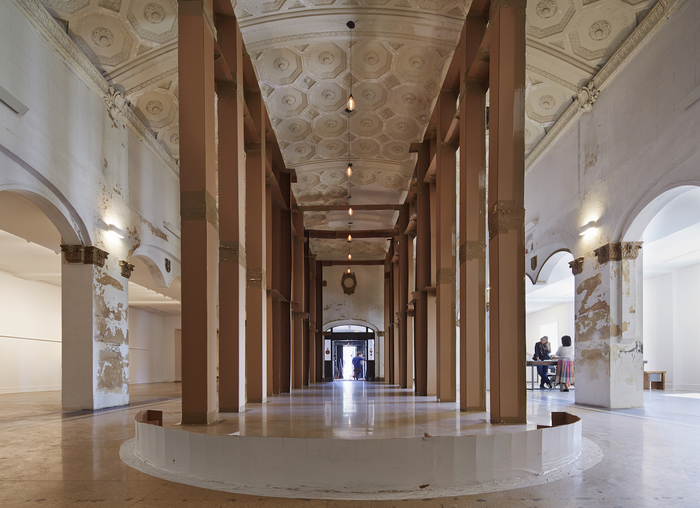 We start with Bunga. His piece, entitled Under the Skin and commissioned by the Chicago Architecture Biennial, is in response to the vaulted ceilings and various arcs intrinsic to the space, the once grand architecture of the South Side bank built in 1923. The sculpture takes the form of a series of straight-edged columns, angular and fashioned out of cardboard and familiarly cloudy-taupe packing tape. The structure is unfinished, though it feels complete. In place of Doric or Ionic characteristics, Bunga’s columns share their forms with steel beams, their flat edges visible from one side, and recessed from the other. They are markers of industry as much as they are Classical. The installation form is Basilica-like in its treatment to the verticality from the entrance; the affect of an alter is completed at the furthest point of the space, demarcated by a small and shallow curve of cardboard barely higher than one foot off the ground. These are drawings in space. In this way, the whole installation is very economical—not only through its means, and the affordability of the materials that built it, but in its minimal gestures. Only the smallest amount of information is given (it is all that is needed, really) to form Bunga’s imposed image onto the space. Like a drawing, the concept of the piece is filled out in the viewer’s mind. The installation is the idea. 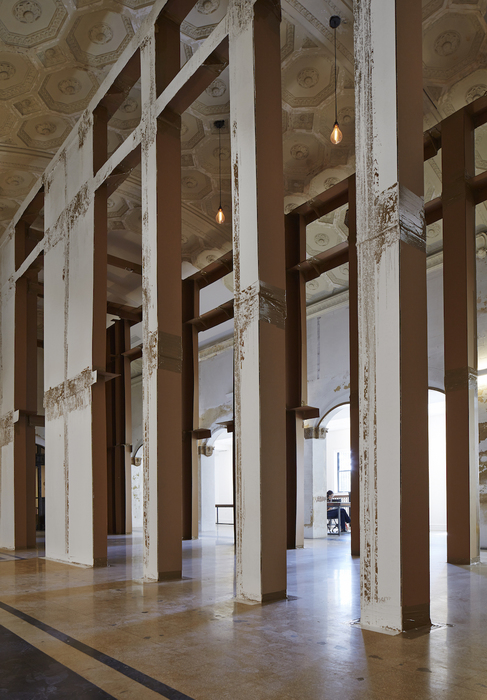 At the opening, I spent time with Bunga. We talked about Classicism from the second floor platform of the Bank, gated with glass, overlooking viewers as they mazed through his architectural intervention, which occupies the building’s central plaza. The structure, reaching nearly as high as the ceiling, is retrofit into the main space, visually pressing against the existing archways. The exterior of the structure is painted in a thin veil of white, but from this vantage point, its original brown texture is the most visible, its raw material turned inward. The margin of space between the walls of the bank and the sculpture is treated with enough space that a second system of doorways is introduced; the existing structure is not masked, but multiplied.

While we stared downward, the artist commented on the perspective shift of viewing the piece from above. “You’ve made a model of reality,” I said. Indeed, the exhibition makes both a subject and voyeur out of the viewer. From here, the crowd looked as though they were occupying a one-to-one architectural model of the space—who knew that cardboard could have such a digital effect? I imagined how dwarfed our bodies must have looked to the previous group staring at us from above. 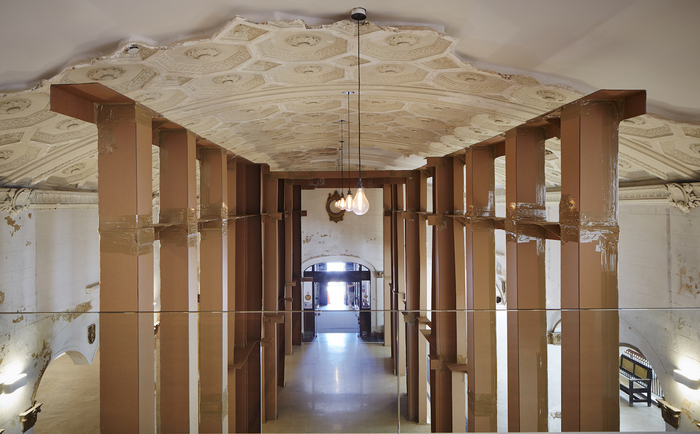 This double register is not far off from Gates’ position—fluidly moving between roles as both an artist and a patron—at once navigating through the system and perceiving it from afar. Even with the complete renovation of the space, just enough detritus is left in the architectural details to let you know that this is not a full renovation. The jagged edge of the original ceiling meets the crisp white remodeled expanse above it; the tables in the office spaces on the upper levels are made out of hybridized wood, but are then cleanly covered with a pane of glass. Such high-low approaches to renewal are familiar to spaces in Berlin—institutionally, and even in private collections. The residue of history and war weighs on the context for exhibiting contemporary art. Sammlung Boros, housed in a Nazi Bunker built in 1943 is just one example, but the Bank is perhaps more in line with the treatment of the Hamburger Bahnhof Museum fur Gegenwartkunst, a train station repurposed for the sake of exhibitions, but within a space that once served the public.

While Gates’ platform is devoid of the gravitas of war that accompanies Sammlung Boros, it makes up for it by invoking America’s fraught relationship with banking institutions. It is no mistake that the Rebuild Foundation’s most recent exhibition domain was once a locus of neoliberal commerce.

Perhaps if the site were not once a savings and loan bank (a more community-centered form of exchanging money), and say a more private sector venture, then this context would mirror the stakes of Gates’ market operation. But it is actually rather fitting that this new space is an intersection of community and commerce—Gates has publicly gone on record advocating for “active growth without gentrification, without new communities—how to remake the communities that we have already here stronger.” So yes, Davis’ critique is true: Gates has straddled the fields of private and public wealth, but it is a far less dubious approach in Chicago, where the accomplishments of the Rebuild Foundation have been achieved, in part, precisely because of the organization’s close relationship with the city. Gates' adeptness at  the municipal politics involved in such a process is a credit to the artist, not damning.

The impressiveness of the Bank’s inaugural exhibition does not come solely from the stakes surrounding the market implications of Gates alone, but rather that Gates has now achieved poly-vocal potential.

Bunga’s exhibition is his first voice. The promise of the Bank is that there are sure to be many others.