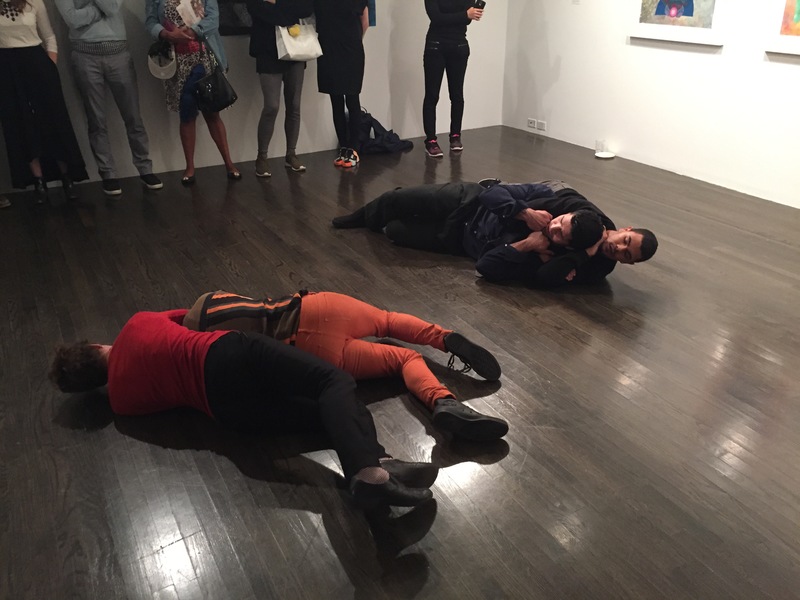 I Tell You What Freedom Is to Me: No Fear

When I first heard of Shaun Leonardo’s performance project, I Can't Breathe—a performance that taught spectators self-defense moves like how to break a chokehold if they are in a situation where they are being accosted—I was skeptical of its merit. Was it benefiting from a tragedy, or addressing real concerns? Would it incite citizens to resist arrest, or would it give people a sense of agency if they ever felt unjustly threatened? The performance follows the death of Eric Garner and the non-indictment of the police officer who killed him. Garner died after being placed in a chokehold by an NYPD officer earlier this year, sparking protests across the nation and inspiring an ever more vigilant community to press harder to end police brutality. The not-so-subtle subtext of the performance was that these moves could be used, if necessary.

I am white—if you couldn’t tell from my initial incredulity. I do see myself as an ally; yet I am constantly reminded of my unintentional biases. I Can't Breathe once again had me questioning the power relationships I take for granted every day.

“Sometimes when you’re fighting the good fight, you’ll find yourself in a predicament,” Leonardo begins as he paces back and forth between ten volunteers lining the walls of the gallery. “These self defense techniques will be considered resisting arrest,” he warns.

When I was growing up in a small, homogenous hamlet in the Midwest, I was taught to respect and fear the police financially (a speeding or parking ticket), but I had never felt that they could, or would, kill me. This feeling of safety and lack of fear is unique to my experience as a white man in America. However, it is not every American’s experience—a fact that is abundantly clear to anyone watching a Facebook feed.

Leonardo demonstrated four maneuvers during the performance: how to break an arm hold; how to reestablish distance if someone grabs your shirt; how to block a punch and “the final maneuver is the chokehold. The same chokehold that took Eric Garner’s life.” 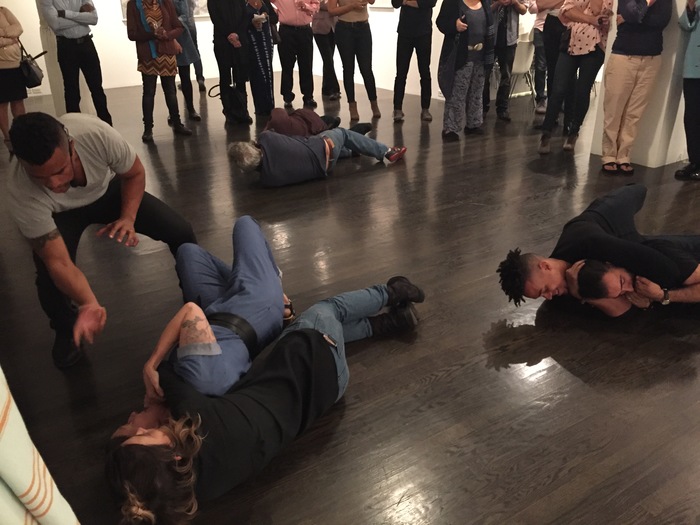 Following the performance, Leonardo and Dr. Isaiah Pickens, a professor at NYU, psychologist at Bellevue and contributor to the Huffington Post and Psychology Today, led a discussion on the effects of trauma on young people of color and the damage it causes our children to live in a heightened state of institutionalized violence and fear. Trauma presents itself in children often as unfeeling, as an inversion: when an individual’s feelings are invalidated by their community, family or society as a whole, they cease to feel. This defense mechanism immediately endangers the youth, placing them at risk of improperly assessing situations as well as increasing the likelihood of responding to aggression with aggression. The worse part of trauma is that it conditions the body to stay on high-alert, thereby affecting cognition.

In an article Pickens wrote for HuffPo following the Charleston massacre, he states: “Despite the amazing capabilities of our brains and bodies, constantly remaining on alert depletes many of our mental resources for navigating other life responsibilities and compromises one of our most valuable tools for maintaining sanity: psychological safety.” Pickens also works with law enforcement agencies to do bias training, a process that is meant to help officers deal with unintentional biases and to prevent them from influencing their work. These biases are simple and abundant. Next time you watch a cop drama, just notice the color of the person portrayed as the bad guy. If you've been taught that a specific type of person is threatening, you will feel threatened upon encountering them.

This performance is an excellent example of pragmatic political art. This type of work not only confronts the viewer with uncomfortable truths but gives the viewer or participant a tool set to use in the future. By evoking aesthetically—Leonardo's tone of voice, body stance, the framework within which lessons are given—feelings of uncertainty and danger, the artist is able to allow the audience to process the relevant emotions, thereby developing a deeper understanding and commiseration with people of color.

Leonardo’s performance illustrates a disconcerting reality that we all know to be true: people of color are repressed by institutional forces that have been at work since the founding of the United States. Never will the people of this nation be free to be their best selves until they can find some room to breathe and feel safe. Politicians know this acutely—think of the amount of money spent on defense by this nation that has not had combat within its borders since the American Civil War—the fear mongering at the expense of immigrants and minorities. As a nation, we won’t be able to address these injustices until we can admit our biases—especially the unintentional ones. It takes work to overturn a culture of oppression and a power structure hinged by fear of one another. It takes work.

I Can't Breathe was staged as part of the exhibition "Between History and the Body", on view through October 16th at The Eighth Floor and supported by the Shelley & Donald Rubin Foundation.

(All images and video courtesy of the author)